Homes that look like they were built for Lord Of The Rings characters Bilbo and Frodo Baggins could soon spring up in the English countryside after new plans were unveiled today.

An architectural firm is proposing to build three single-storey, four-bedroom homes, with the unusual design dug into a hillside in Hampshire.

As imagined by JRR Tolkien and recreated in the series of blockbuster films, ‘hobbit homes’ are sunk into a grassy hill and then covered with soil.

Michael Wigley and John Glasspool have submitted plans for ‘hobbit homes’ to be built into a hillside in Timsbury, Hampshire (artists impression pictured)

Despite being a fan with several locals, planning officers at Test Valley Borough Council have earmarked the plans for rejection, claiming they would mar the landscape

They are a huge tourist attraction where they were originally filmed in New Zealand and are home to cousins Bilbo and Frodo in the trilogy.

Plans for the homes in the leafy Hampshire village of Timsbury near Romsey, are being submitted to the local planning authority on Tuesday.

If the proposals are approved by Test Valley Borough Council, three lucky families or avid Tolkien fans could live just like the Baggins do in Middle Earth.

The design allows the earth on top to provide insulation for the homes, making them fossil fuel-free, reducing carbon emissions, and making them a greener alternative to standard new build properties. 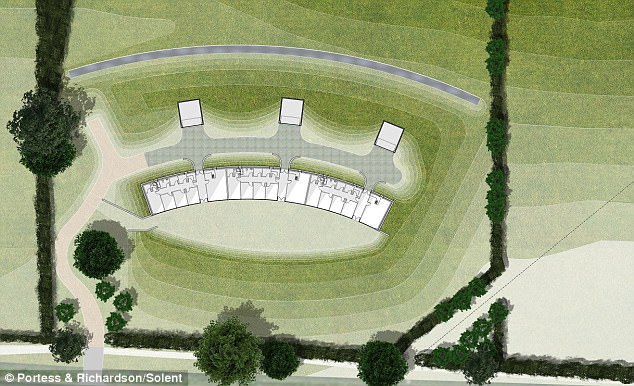 The proposals for three single-storey, four-bedroom homes in the leafy Hampshire village (pictured) would be dug into the hill and covered with earth 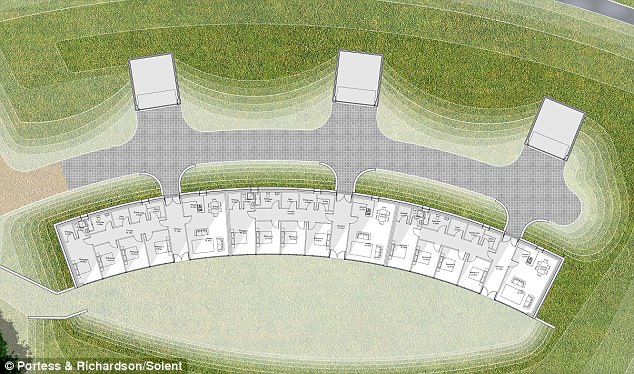 The landowners, who live in the village in Hampshire claim they want to build the homes so people can live fossil-fuel free, as the earth on top acts as insulation

Owners of the land, Michael Wigley and John Glasspool, who both live in Timsbury, say their motivation for the project is to live free of fossil fuels.

The pair commissioned architects Portess and Richardson to draw up the plans for the new homes, who worked with Dr Jeremy Harrall, a leading expert in earth-sheltered buildings.

In Mr Wigley and Mr Glasspool’s submission to the council they said: ‘Earth-sheltering homes blend seamlessly with the natural landscape and have minimum impact on the local ecology.

‘Earth-sheltering buildings are aesthetically pleasing while ensuring that the maximum habitat is left alone for wildlife.’

But planners at Test Valley are not so keen and have marked the application for refusal, despite the support of several locals in the area. 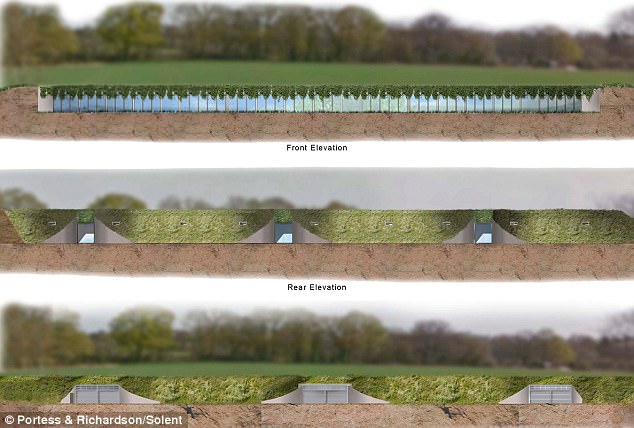 The landowners said of the plans (pictured) : ‘Earth-sheltering homes blend seamlessly with the natural landscape and have minimum impact on the local ecology’

Michelmersh and Timsbury Parish Council, which covers the area of the site, is also set against the plans, claiming they would leave an unwelcome mark on the field they are in.

In an objection letter the parish council clerk, Katie Hendy said: ‘The site is in the countryside – the development would be contrary to the current Borough Local Plan.

‘Our understanding is that the is no shortfall in the five-year supply of housing land in Northern Test Valley and the development could not be justified on that ground.

‘This open field [on which the homes will be built] is a particular feature of the northern approach to the village.

‘We agree that the proposals are interesting and this development would be quite different from the existing housing stock in the village.

‘But the development as proposed is not a ‘blueprint’ for low-carbon housing for the wider market, because of the low density, complexity, and high construction costs.’

The plans are due to go before a planning committee meeting on Tuesday. 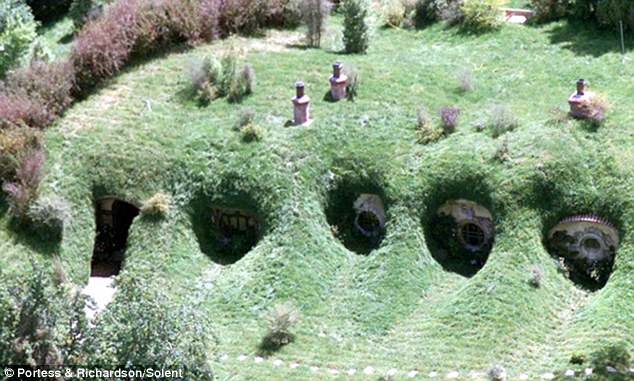