An emotional Haotong Li completed a wire-to-wire victory at the BMW International Open but it required a 50-foot birdie putt at the first play-off hole to secure his first win in more than four years.

The 26-year-old, who missed 14 cuts last year, had led through all three days in Munich and was five strokes ahead after five holes of his final round but he needed birdies at the 16th and 17th to take a one-shot advantage over Thomas Pieters down the last.

When the Belgian birdied and Li’s 11-footer to win lipped out the pair headed back down the par-five 18th, where the Chinese twice flirted with the water on his way to the back of the green at Golfclub Munchen Eichenried.

But he then thinned his chip way past the flag only to then hole the monster birdie putt back up the hill and when Pieters’ seven-foot attempt to extend the play-off slid past Li collapsed to the floor in tears.

‘I don’t have the words to describe it now,’ Li, who admitted he was ready to quit the sport after slipping to 542nd in the world last year, told Sky Sports.

‘As soon as I chipped the ball I thought “I just gave another chance away. I just can’t believe it can happen to me again”.

‘Ten months ago I literally decided to quit but I’m somehow where I am now. Golf is f***ing hard. I had no idea I could win this play-off.’ 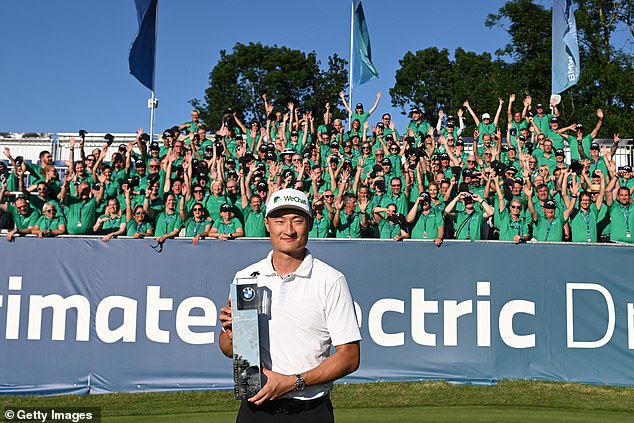 Three birdies in five holes had put Li in a commanding position but he picked up only more more shot in his next 10 holes as four bogeys brought the chasing pack – and particularly playing partner Pieters – into play.

The former Ryder Cup player had two birdies and two bogeys in his first six holes but then carded five more birdies, including a crucial one at the last to get level with Li at 22 under.

Both finished two clear of New Zealander Ryan Fox, who was in the mix up until he failed to birdie any of his last three holes.