A bumbling suspect in a robbery targeting a pizza delivery woman in Washington state is behind bars after leaving a long trail of clues that led deputies directly to his doorstep.

The Pierce County Sheriff’s Office on Monday recounted the tale of the ill-fated pizza heist in a detailed Facebook post, which begins with a list of tongue-in-cheeks tips for those who wish to get caught after robbing a pizza driver at gunpoint.

The post mocked the man for using his own phone to place the order; calling from the same number you had used to order pizza just days earlier; allegedly committing the crime at your own apartment complex, and still being in possession of the cell phone, gun and pizza when cops came knocking at his door.

According to investigators, the improbable case began unfolding at around 7pm last Friday when deputies assigned to the University Place Police Department responded to a 911 call from a Pizza Hut delivery woman who reported that she had been robbed at gunpoint.

Humble pie: This half-eaten Pizza Hut pie has landed a 20-year-old Washington state man behind bars after he allegedly robbed a delivery woman at gunpoint 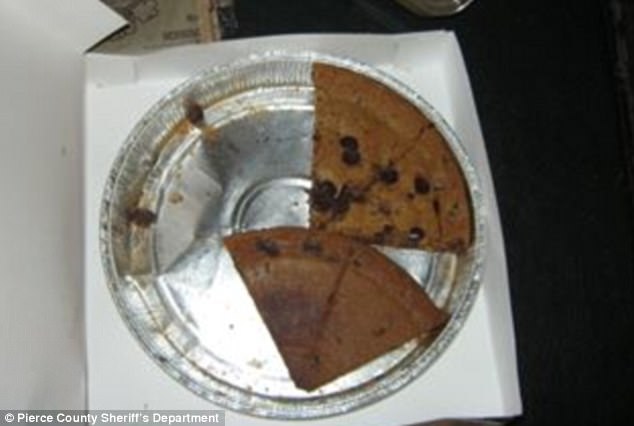 Trail of crumbs: Deputies have discovered that the suspected used his own cell phone to place the order, committed the robbery outside his apartment complex and was then caught red-handed with the pizza, cookies (pictured) and other treats 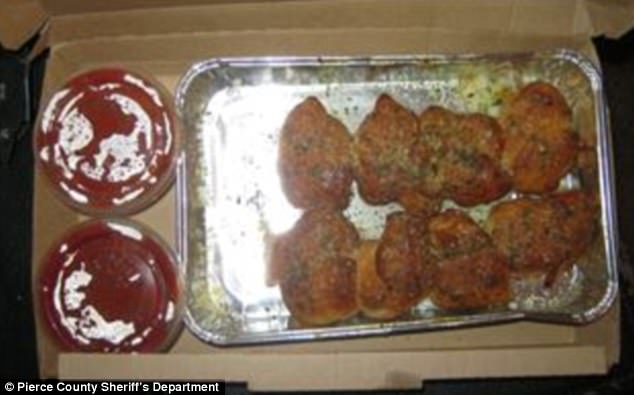 Were the garlic knots worth it? The suspect lamented that he ‘had messed up his life over eighty bucks in pizza’

The victim told the deputies that she had received a delivery order from a 980 area code; the customer identified himself as ‘David Adams’ and provided an address in the 7300 block of Chambers Creek Road West in University Place.

When the driver arrived at the address with the pizza, she could not find the customer, so she called him back and the man instructed her to meet him in front of one of the buildings at an apartment complex located at the corner of Bridgeport Way West and Chambers Creek Road.

According to the statement, the victim drove to the location, emerged from her vehicle with the food order, and was accosted by two men, one of whom pressed a handgun to her leg and ordered her to hand over the food.

The armed suspect and his sidekick then removed the pizza, cookies and garlic knots from the delivery bag and fled on foot with their edible loot, and the Pizza Hut driver drove away and called 911 to report the heist.

Deputies asked Pizza Hut to run the 980 phone number through their computer system to see if it had previously ordered any food through them and learned that an order had been placed from that number four days earlier, but under a different name, and from an address in the same apartment complex where the robbery took place on Friday.

When the investigators arrived at the apartment complex and knocked on the door of the unit where the previous pizza delivery order had been placed, they could reportedly hear loud music and several voices talking inside, ‘and could smell an odor of marijuana,’ according to the statement.

The deputies knocked on the door and announced, ‘Police.’ They heard someone’s voice inside say, don’t answer,’ after which the music was turned off and everything got quiet. 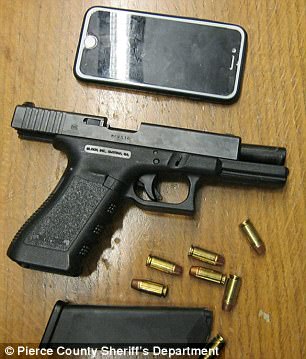 The deputies have seized the alleged robber’s iPhone used to place the order, along with this stolen Glock .40 caliber

One of the deputies walked to back of the building and spotted several men standing on the third-floor balcony; fearing they might try to jump down, the deputy ordered everyone to raise their hands, after which the occupants of the unit agreed to open the front door to the cops.

Inside, according to the sheriff’s office statement, they observed five men and two women, along with several boxes from Pizza Hut containing half-eaten food that matched the order that was taken during the armed robbery.

All of the people in the apartment were handcuffed, patted down for weapons, and identified; deputies noted that one of the men’s names matched the name from the pizza order four days earlier.

‘Deputies observed a loaded Glock .40 caliber semiautomatic handgun under the couch cushion where the man was seated,’ stated the sheriff’s office.

In addition to the physical evidence, the officers also got an impromptu confession when they say the 20-year-old suspect blurted out, ‘Man,’ I made a stupid mistake.’

He went on to say that he called in an order to Pizza Hut and that he and another man had ‘robbed the pizza girl.’

The talkative suspect admitted the gun recovered from the couch was the weapon used in the robbery, and that he had recently stolen it while at a party.

He also lamented that he ‘had messed up his life over eighty bucks in pizza’; the deputies pointed out to him that the cost of the stolen food was, actually, $81.24.

While in the apartment, the deputies dialled the 980 phone number that the pizza had been ordered from, leading them to a cell phone that began to ring at the spot where the 20-year-old suspect was sitting.

The other occupants of the apartment denied knowledge or involvement in the robbery; several said that when they arrived, the suspect was already there with the food.

The blundering robbery suspect was booked into the Pierce County Jail on charges of first-degree robbery and assault.