Pretty as a picture amid the spring bluebells of Norfolk, birthday girl Princess Charlotte is a natural in front of the camera.

And what a treat to see – in these photographs taken by the Duchess of Cambridge to mark her daughter’s seventh birthday today – the family’s adored new pet for the first time.

Prince William and Kate have kept their new pup’s identity a secret until now. But the Daily Mail can reveal that the little spaniel is named Orla.

Kate’s three pictures of her spirited daughter – a princess who adores ballet but can also give her brother George a run for his money on the football pitch – capture her natural joie de vivre.

Princess Charlotte, who turns seven on May 2,  has been pictured with her pet dog – whose name has just been revealed as Orla 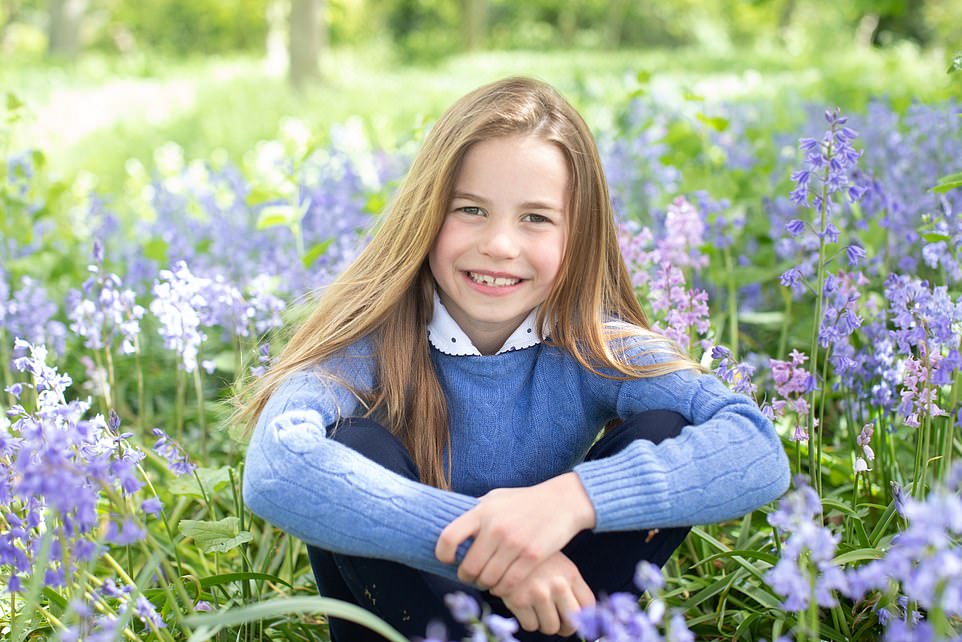 The young princess was sat down in the spring bluebells of Norfolk, at the family’s country home Anmer Hall 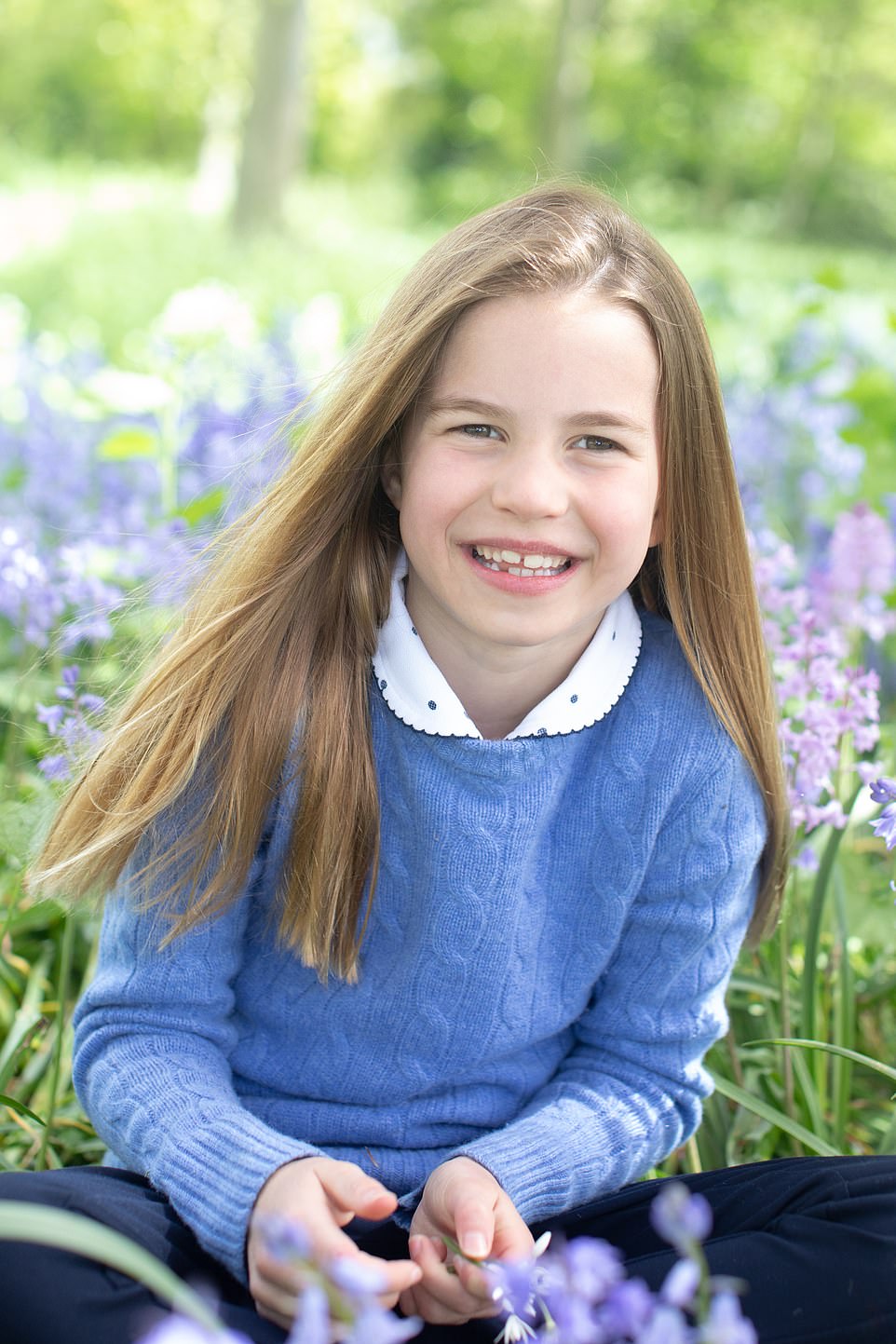 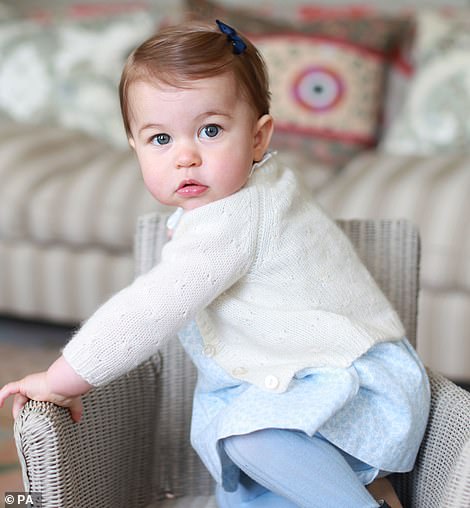 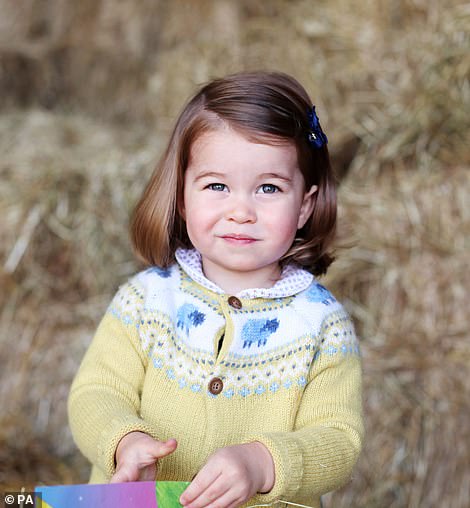 Princess Charlotte has had her picture released each year for her birthday (pictured her first birthday, left, and second birthday, right)

Laughing into the lens, Charlotte wears a blue patterned blouse and jumper, and clutches a posy of freshly picked daisies in her hand.

Facially the fourth-in-line to the throne bears a striking resemblance to big brother George – but with her mother’s brunette hair and green eyes.

The pictures were taken at the family’s country home Anmer Hall over the weekend, where they were also joined by little Orla. She was given to the family in the summer of 2020 by the duchess’s brother, James Middleton. She proved to be a great source of comfort when they lost Lupo, their first black spaniel, in November 2020.

Kate and William had doted on Lupo since they got him as a puppy in 2012 – a year after they married. However, they so jealously guarded his privacy that they refused to confirm his identity at first, let alone reveal his name, until Kate let it slip in an incident dubbed ‘Puppygate’.

While Lupo was the Italian for ‘wolf’, Orla – whose name has also been kept under wraps for two years – is Celtic in origin and means ‘golden princess’.

It is not known why the couple chose it but they later said they liked the name Lupo so it may be the same for their new pet. 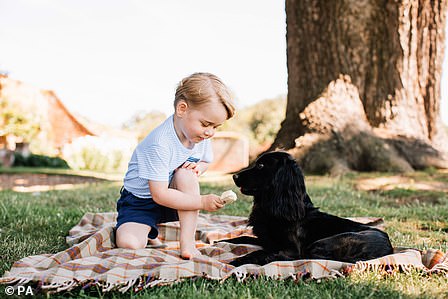 The Cambridges  were devastated by the death of their dog Lupo in November 2021, pictured with Prince George in 2016

Lupo the cocker spaniel was given to Kate by her brother James in 2012.

He originally bred a litter of puppies from his dog Ella in 2011.

James kept one called Luna but gave brother Lupo to Kate when Prince William, then an RAF search-and-rescue pilot, was deployed to the Falklands.

Lupo often appeared in official pictures of the Cambridges, but died aged nine.

In an Instagram post the family said: ‘He has been at the heart of our family for the past nine years and we will miss him so much.’

New pup Orla was also given to the Cambridges by James Middleton, before Lupo died.

Now that she is seven, Charlotte is likely to be seen on more royal engagements such as church services. She joined George, eight, for a memorial service for their late great-grandfather, the Duke of Edinburgh, in March.

She is currently a pupil at Thomas’s prep school in Battersea, south-west London. But last month the Mail revealed that she and little brother Prince Louis, four, are set to join George at an exclusive Berkshire school from September.

William and Kate have been scouting out both schools and new homes in the countryside close to the duchess’s parents, Michael and Carole Middleton.

The couple are looking to start a new life in the duchess’s home county in order to give their young family the best chance of a relatively normal childhood while they can. 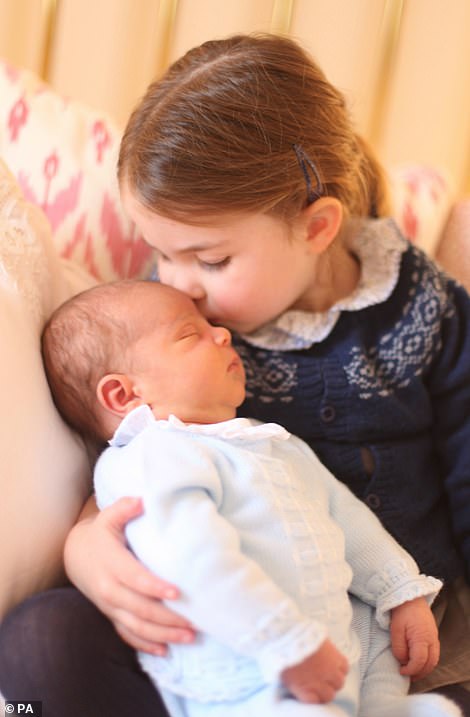 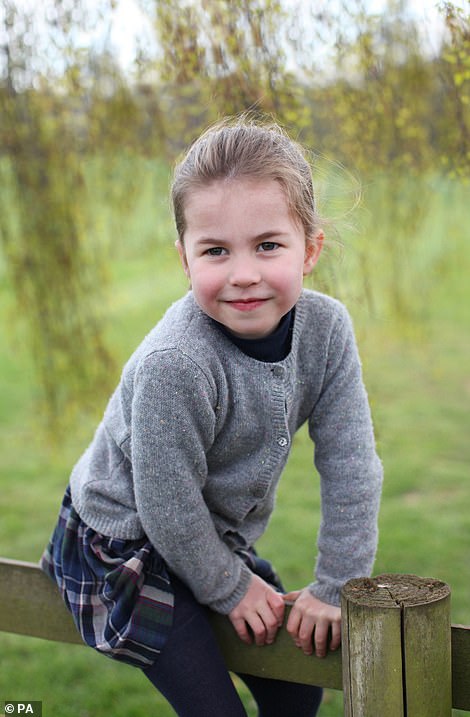 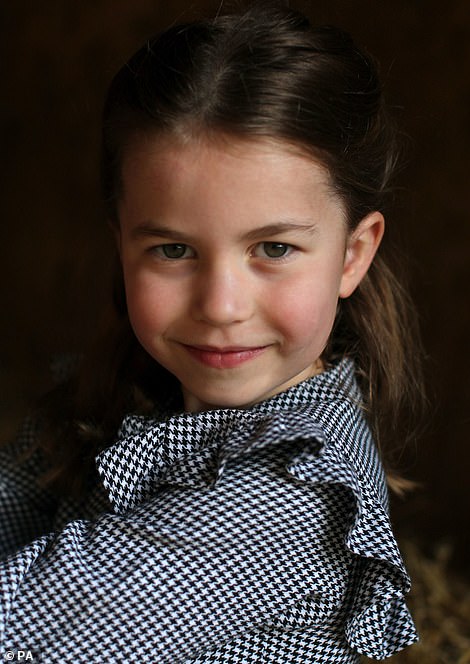 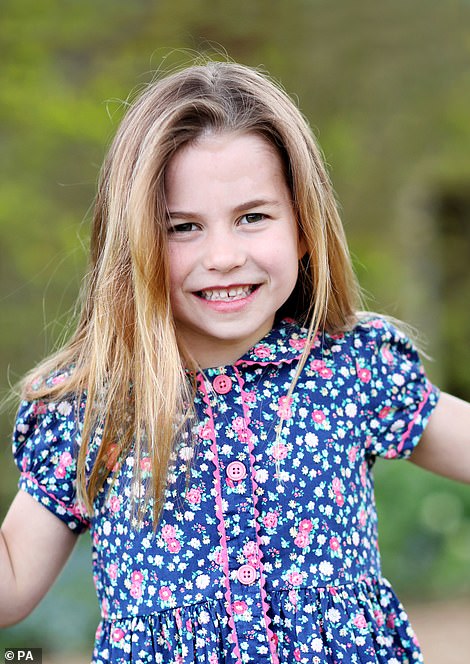 The Duchess of Cambridge usually takes the photos of her daughter on her birthday (left, fifth birthday, right, sixth birthday) 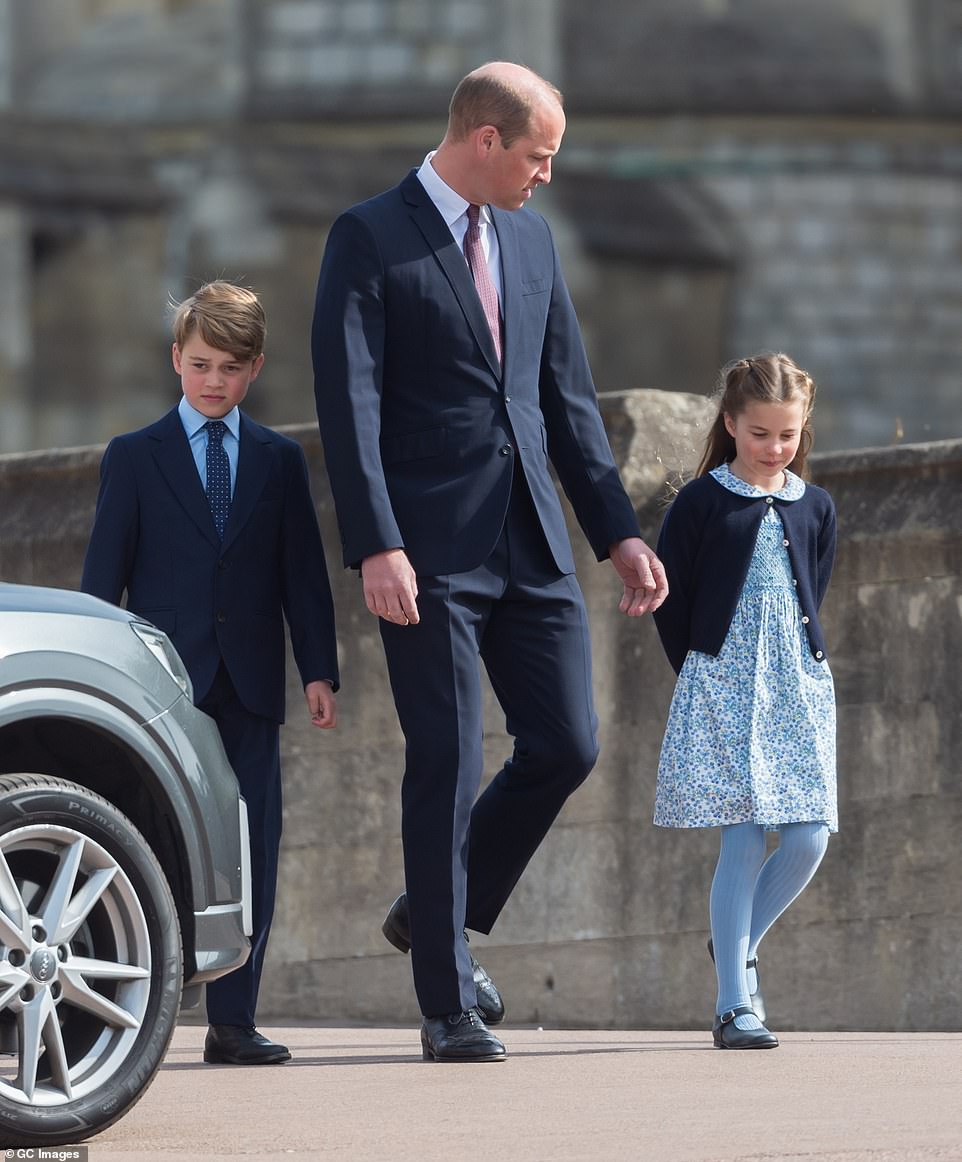 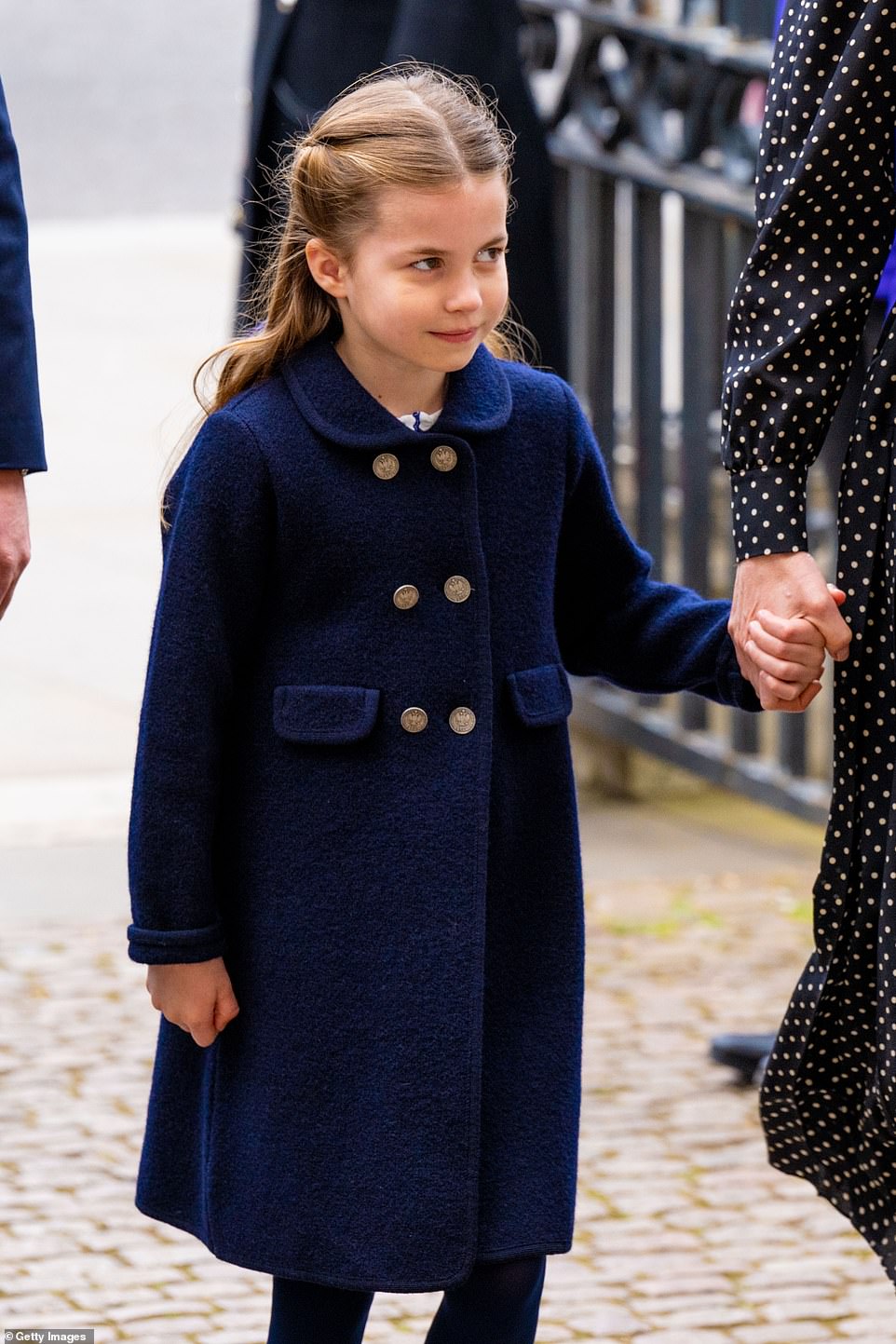 Princess Charlotte will be attending an exclusive Berkshire school in September, outside of school she likes singing and ballet

Although Anmer Hall was a perfect base when William was working for East Anglia Air Ambulance, now that he and his wife are full-time working royals it is no longer practical for them to regularly travel up to Norfolk at weekends.

Keeping all their children at the same school will also help to strengthen the bond between them as they one day take on the challenge of royal roles in a modern age.

Earlier this year Prince William revealed that one of the few things they fight about is who gets to choose the music they listen to in the morning.

Charlotte, he said, ‘loves running around the kitchen in her dresses and ballet stuff and everything’. He added: ‘She goes completely crazy with Louis following her around trying to do the same thing. It’s a really happy moment where the children just enjoy dancing, messing around and singing.’

He said that his daughter likes to play the song Waka Waka by Colombian pop star Shakira.