An activist who stood beside actor John Boyega at a Black Lives Matter protest has been revealed as a hard-left firebrand who called an injured policewoman ‘stupid’ and condoned shooting racist police officers.

Gary McFarlane, a member of the Socialist Workers Party (SWP), took part in the Hyde Park protest with the Star Wars actor last weekend, as reported by The Times.

The 28-year-old movie star gave an impassioned speech at a Black Lives Matter protest in Hyde Park following the killing of George Floyd in the US.

Pictured next to him at one point during the protest was Mr McFarlane who previously tweeted about film Queen and Slim, in which one of the character’s shoots a police officer.

He said: ‘#minneapolisriots Queen & Slim showed how to deal with racist cops. Make it real!’

The 59-year-old also shared a video of the police woman injured after she rode her horse into traffic lights at a BLM protest in central London and labelled her ‘stupid’.

Mr McFarlane has appeared on both Russia Today and the BBC and is described as part of the Black Lives Matter movement.

He is a long-term party member of the SWP, an anti-capitalist political party, which this week ran a series of Zoom meetings for members on how to capitalise on the BLM movement.

But the BLM – who previously split with the party in 2016 over allegations that the group failed to correctly follow up rape allegations made by two female members – has again distanced itself from the group.

A statement last night said: ‘None of the leadership of BLM are, or have ever been members of the SWP. Any groups which are part of SWP and claim to be part of BLM have nothing to do with us.’

Dr Remi Adekoya, a political science lecturer at Sheffield University, also slammed the fringe-left wing party for trying to take over the movement. 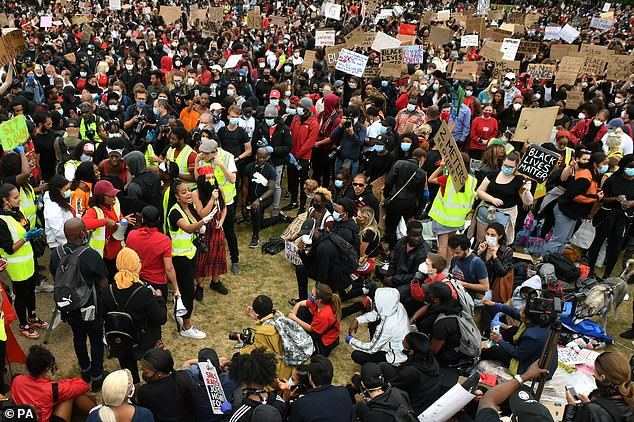 Participants in a Black Lives Matter protest rally in Hyde Park, London, in memory of George Floyd who was killed on May 25 while in police custody in the US city of Minneapolis

He said: ‘It could turn the British population against the BLM movement and that is going to come back and bite us — people of colour.

‘It’s not going to bite white members of the Socialist Workers Party.’

Khalid Mahmood, a Labour MP, also criticised the ‘fringe’ party, saying the group ‘jumps on all sorts of bandwagons’ and ‘try and seek attention’.

He added: ‘They are trying to infiltrate. There are people associated with that with a harder element, and a harder edge.’

A spokesman for the SWP told The Times: ‘The SWP has not attempted to hijack the BLM movement. The SWP supports the BLM protests in the US, Britain and across the world. They are a welcome response to societies saturated with racism.

‘We have not sought to take over the movement.’

The spokesman added that : ‘Gary McFarlane is a longstanding anti-racist and socialist. He set up one of the BLM groups that were founded in 2016 in London.

‘He has never presented himself as a leading organiser of the present demonstrations.’