Harlequins stars Marcus Smith, Alex Dombrandt, Joe Marchant and Jack Kenningham are called up to the England squad by Eddie Jones with the four players on a high after their Premiership final win over Exeter

Harlequins heroes Marcus Smith, Alex Dombrandt, Joe Marchant and Jack Kenningham have been rewarded for their Premiership win with call-ups to the England squad.

But coach Eddie Jones has snubbed fly-half Joe Simmonds from Exeter Chiefs, as well as Jack Nowell, Alec Hepburn, Harry Williams — and there is no place for prop Joe Marler.

Another Quins player not selected is Louis Lynagh, son of Australian legend Michael, who scored twice in the final.

Four Harlequins players have been called up to the England squad after Premiership final win, including Marcus Smith (pictured) 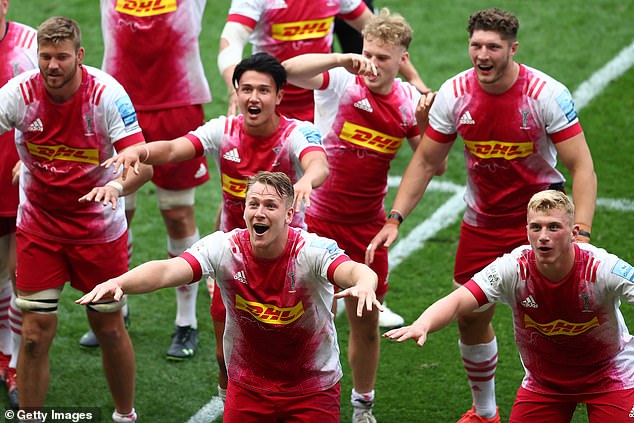 His famous father took to Twitter on Monday night, saying England could lose him to the Wallabies or Italy — where Louis was born — if they don’t cap him soon.

‘Qualified for England, Australia & Italy. Italy & Australia have contacted him within the last fortnight. The RFU, England Rugby have NEVER spoken to him about his intentions,’ wrote Lynagh senior.