He’s filmed hundreds of fake fight scenes over the course of his movie career.

But Harrison Ford has now opened up on the moment he famously punched his Blade Runner 2049 co-star Ryan Gosling on set in December.

‘His job was to be out of the range of the punch. My job was also to make sure that I pulled the punch,’ the actor, 75, explained in the cover interview for GQ’s October’s edition.

Telling it like it is: Harrison Ford explained how he punched his Blade Runner 2049 co-star Ryan Gosling in a cover interview for GQ’s October edition

‘But we were moving, and the camera was moving, so I had to be aware of the angle to the camera to make the punch look good.’

And he added:’Ryan Gosling’s face was where it should not have been.’

Harrison defended himself, explaining: ‘You know, I threw about a hundred punches in the shooting of it, and I only hit him once.’

Ryan, 36, has revealed in numerous interviews that after the incident the veteran actor came to his dressing room with a bottle of scotch, poured him a glass, then walked out with the bottle. 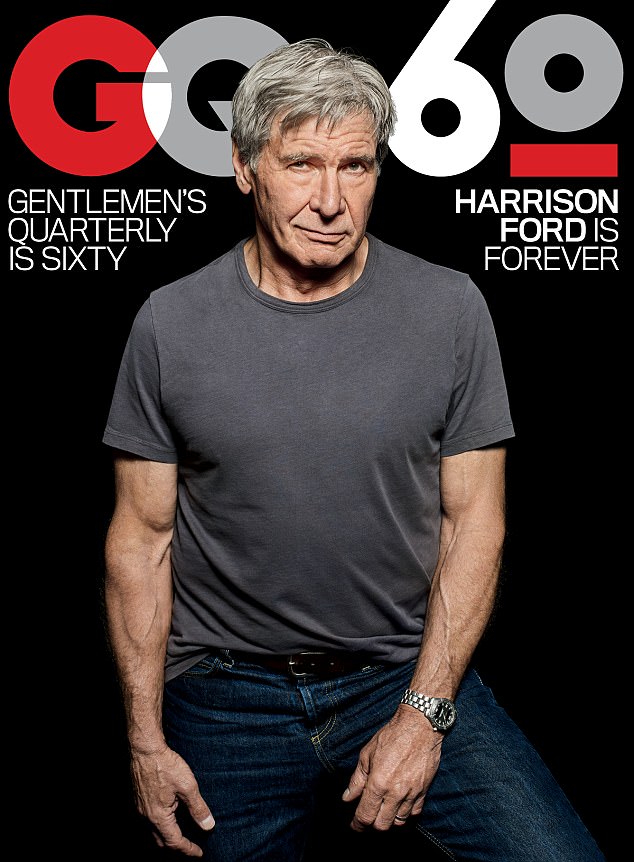 Making his own style: The actor, 75, wore his own Jason Scott T-shirt and jeans for the cover of GQ’s October edition celebrating its 60th anniversary 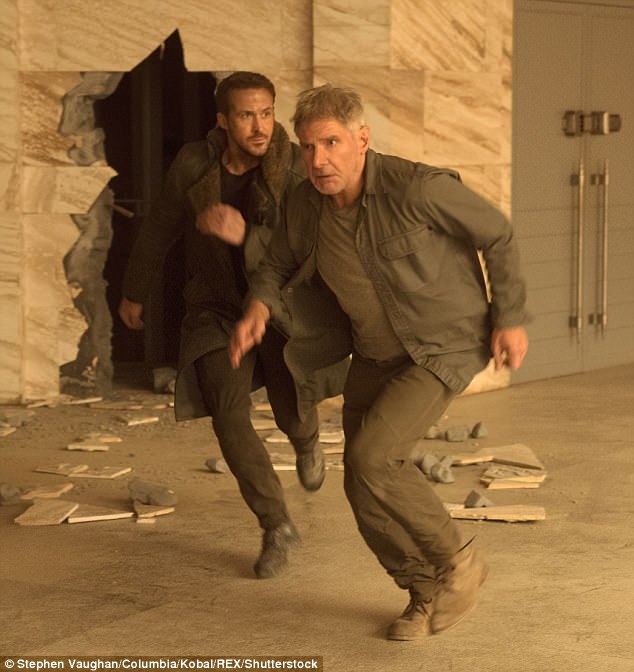 No worse for wear: Ryan, who plays replicant hunter Officer K, didn’t look look like the punch did him much damage as he and Harrison, as Deckard, make a run for it in a scene from the film

‘What? Did he expect the whole bottle?’ the Indiana Jones star said. ‘You know, I figured one drink would fix it. That was enough.’

Despite the punch, the actors are great pals.

‘He’s been doing this since he was six-years-old or something. He knows what he’s doing.’ 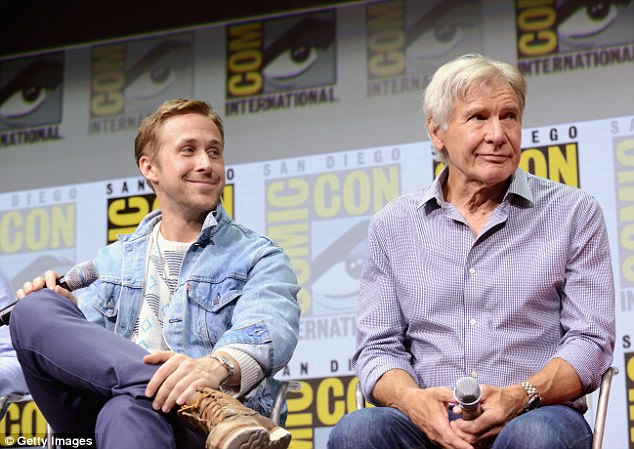 Still good pals: Ryan and Harrison talked up their sci-fi bond at Comic-Con in San Diego in July

Blade Runner 2049 is a sequel to the 1982 Ridley Scott-directed original, produced by Ridley and directed by Denis Villeneuve.

Harrison played Deckard, a blade runner whose job was to hunt down replicants – escaped androids that look human and may not not even know they’re not human.

In the new movie, Ryan plays Officer K, a blade runner who searches out Deckard, who has been missing for 35 years. 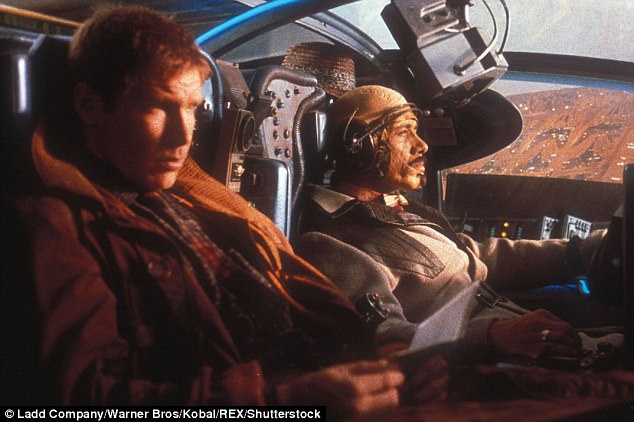 Iconic role: Harrison appeared as Deckard in Blade Runner back in 1982

There’s still no final word on a mystery that has divided fans since 1982 – is Deckard a human or a replicant?

Harrison and Ridley don’t agree, with the actor going for the human answer and the director favoring the replicant.

‘I’m interested in preserving the question for the audience,’ Harrison told GQ. ‘There’s not a definitive answer.’

Blade Runner 2049 will be in theaters October 6. 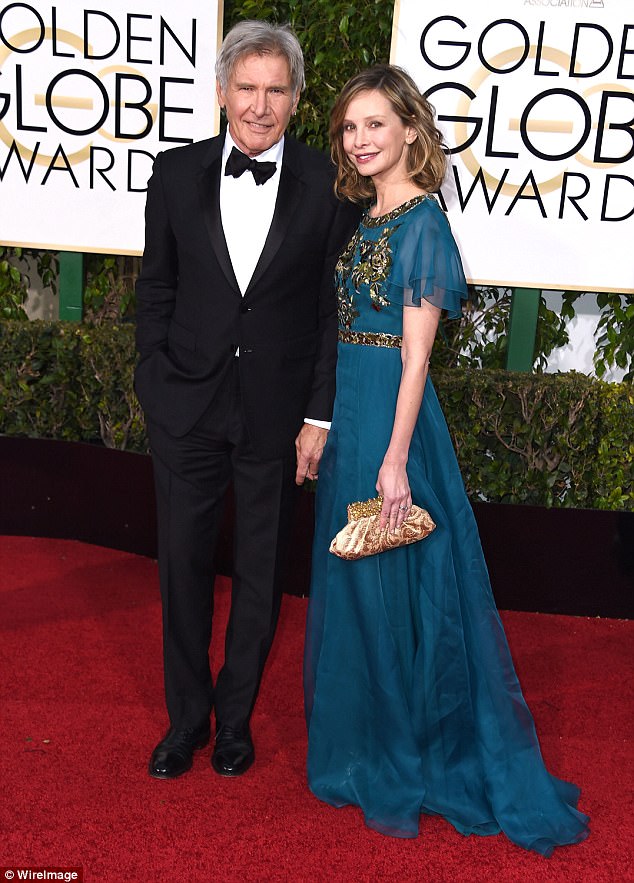 Another red carpet: The actor with wife Calista Flockhart at the 2016 Golden Globes

As for the space saga that propelled Harrison to fame in 1977, he said he is ‘finished with Star Wars’.

And it turns out Han will be back in Star Wars: Episode VIII – The Last Jedi as a ghost, according to director Rian Johnson.

Han was killed by the evil Kylo Ren, his long-lost son at the end of 2015’s Episode VII – The Force Awakens,. Expert fighter pilot Rey had come to view Han as a father figure. 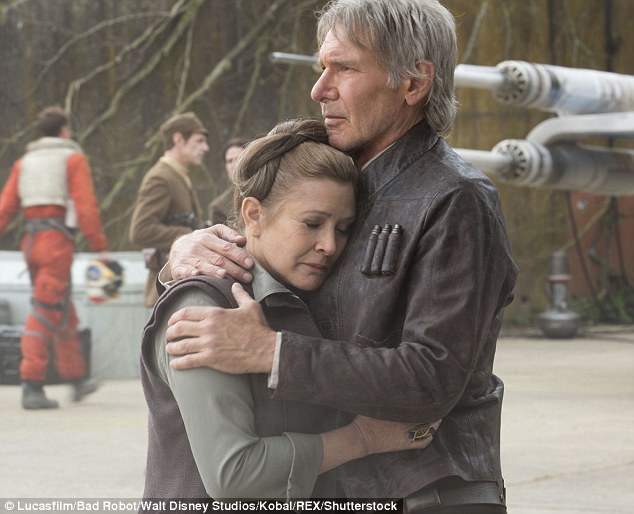 Briefly reunited: Harrison’s Han and Carrie Fisher’s Leia met up in  2015’s Star Wars: Episode VII – The Force Awakens before the character was killed by his evil son Kylo Ren

Because of this ‘a figurative ghost of Han had to be present throughout this entire film,’ Rian told Entertainment Weekly last month.

Whether that means extra scenes or old footage remains to be seen when the movie is released on December 15.

Harrison was reluctant to talk about the secret affair he had with Carrie Fisher, who played Princess Leia in the first Star Wars, when she was 19 and he was 35. 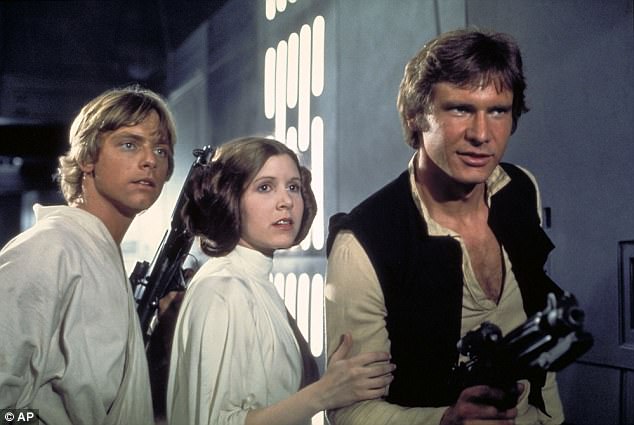 Kicking off an iconic franchise: Mark Hamill as Luke Skywalker, Carrie as Princess Leia and Harrison as Han Solo in the 1977 Star Wars

The late actress revealed it in her memoir published last year before her death last December, age 60.

He didn’t read it, saying: ‘It was strange for me. With Carrie’s untimely passing, I don’t really feel that it’s a subject that I want to discuss.’

As for his late career renaissance in Star Wars, Blade Runner 2049 and with an Indiana Jones project in the offing for 2020, he said: ‘You know, it’s…better than bowling.’ 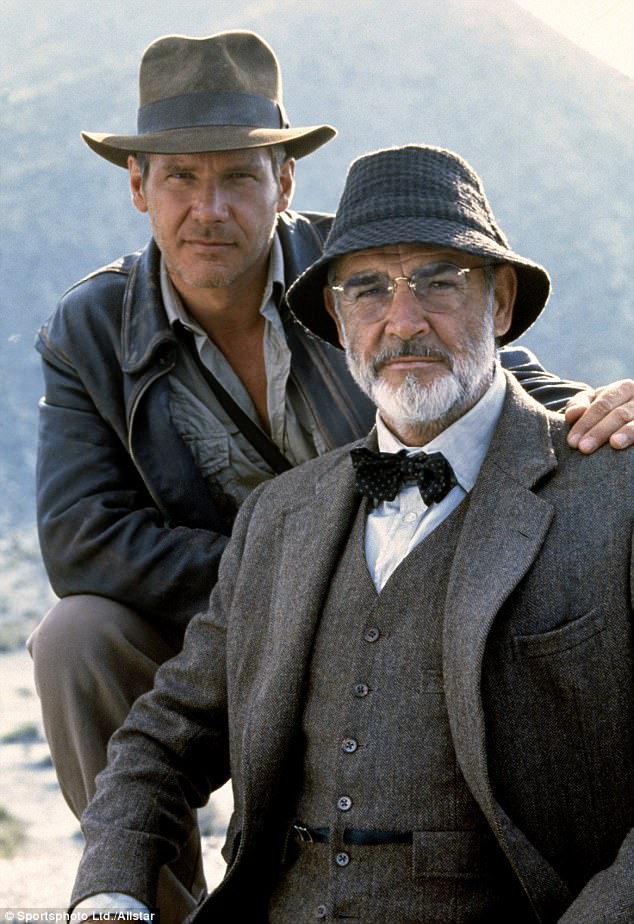