HARRY COLE: Exclusive club for ex-Prime Ministers is rocked by a rift

It has a very exclusive membership but all is not well in the Ex-Prime Ministers’ Club.

Gathering last weekend for the traditional Remembrance Day commemorations, I hear things were rather tense among the former premiers as they met for a cup of coffee at the Foreign Office beforehand.

‘John Major basically blanked David Cameron and Theresa May and would only talk to his fellow anti-Brexit chums Tony Blair and Gordon Brown,’ says my mole. ‘The three of them were huddled together whispering and ignoring everyone else.’

After helping to contribute to Boris Johnson’s Supreme Court humiliation in September, Sir John has even less time for the current Prime Minister.

‘Major has made no secret of the fact that he loathes Johnson because of Brexit and just scowled at him.

‘It used to be a case of Gordon and Tony glaring at each other at these things, but this was far worse,’ explains one seasoned Whitehall insider.

‘It was bordering on rude,’ adds another source.

In fact, things got so bad that it was left to Theresa May to try to initiate some small talk, and everyone was clearly relieved as the clock ticked towards 11am and they could troop to the Cenotaph for the wreath-laying. 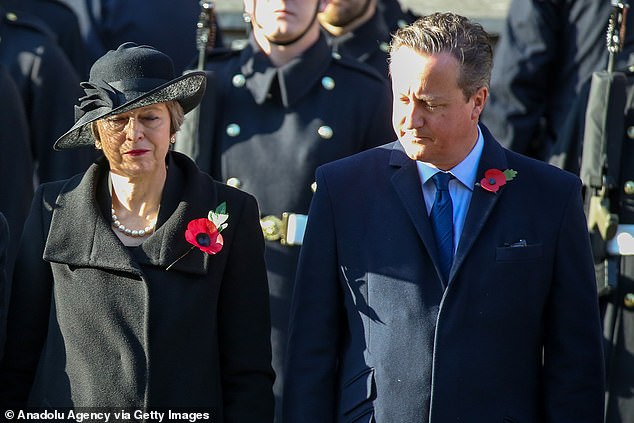 ‘John Major basically blanked David Cameron and Theresa May and would only talk to his fellow anti-Brexit chums Tony Blair and Gordon Brown,’ says my mole

Rebel Laura’s back on board

‘A General Election that will end up with Corbyn,’ was the bold prediction made by one glamorous Newsnight pundit back in July.

Laura Trott, pictured above on the show, also claimed the new PM’s Brexit strategy was hopeless ‘because Europe do not like Boris Johnson and I don’t think they will be willing to give him something.’

Could this be the same Ms Trott, a former aide to David Cameron, who told her local paper last week that she was fully behind ‘Boris Johnson’s Brexit’.

Amazing what a difference being selected for true-blue Sevenoaks – with a 21,917 majority – has made.

They were friends then enemies, then leadership rivals, but I hear Boris Johnson and fellow Brexit stalwart Michael Gove are to go head-to-head again.

The adroit Scotsman and expert debater is being lined up to play Jeremy Corbyn in the Tory rehearsals for the TV Election debates that start on Tuesday.

It is on a knife-edge in leafy South-West London, but somebody reckons Brexiteer Zac Goldsmith is safe against the Lib Dems in the Remain-heavy seat of Richmond Park. ‘One punter has put £10,000 on him to win,’ bookies Fitzdares tells me.

Given that millionaire Zac is an investor in the high-end firm, do they know something we don’t?

Thirsty hacks travelling with Jo Swinson demanded the Lib Dems’ bright yellow battle bus pull over at a petrol station so they could get some beers for the long journey back to London.

It was only once the bus had got 20 minutes further down the road that someone realised one poor party aide had been left behind.

Labour hit back hard after two dozen public figures, including John le Carré and Joanna Lumley, signed a letter claiming they could not vote for Corbyn because of the antisemitism furore.

A dossier was circulated to Left-of-centre journalists that accused some of the signatories of themselves being prejudiced in a bid to blunt the stinging attack.

On the list was actor Simon Callow because he had once written a book about notorious anti-Jewish composer Richard Wagner. But what did the book say?

‘The thing that makes him [Wagner] controversial is his antisemitism, which is repulsive to a degree that is almost toxic to deal with,’ wrote Callow.

Their planned candidate dropped out in mysterious circumstances on the morning of the day when nominations closed, leading to whispers about dirty tricks.

Neighbouring MP Simon Clarke had to help find a new candidate, with the paperwork going just before the deadline closed. Tory HQ officials think they rumbled a local stitch-up designed to give Tice a clean run against Labour.