Harry Kane’s wife Katie led the WAGs arriving at the England vs Wales World Cup clash match on Tuesday night in Qatar ready to cheer on the Three Lions.

The mother-of-three, 29, was showing her support for the captain in her England shirt as she made her way to her seat for the sure-to-be thrilling fixture.

Declan Rice’s girlfriend Lauren Fryer and Aaron Ramsdale’s fiancée Georgina Irwin were also in attendance at the match as they soaked in all the football action.

England and Wales remain all square in ‘the Battle of Britain’ despite the Three Lions pressing early in tonight’s crunch World Cup match.

Harry Kane and his counterpart Gareth Bale led their teams out at Ahmad Bin Ali Stadium before fans joined in with a rousing rendition of the national anthems. 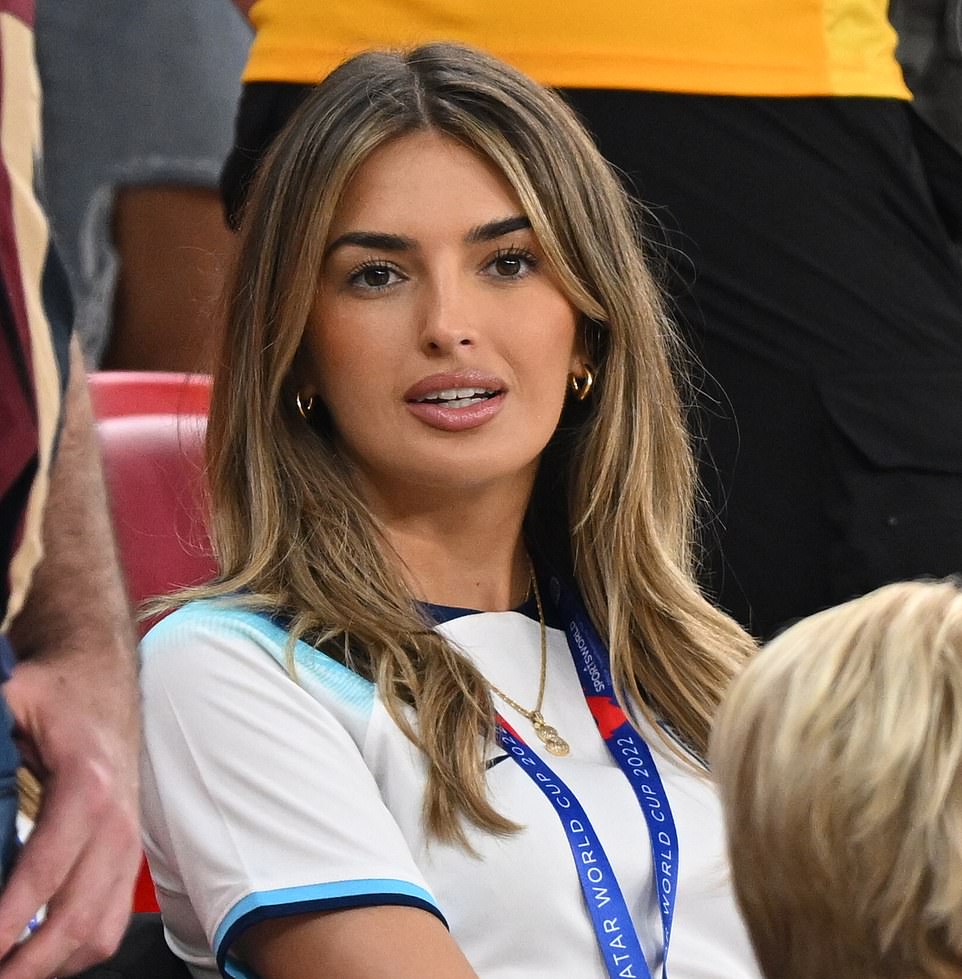 Watching: Sasha Attwood – the girlfriend of Jack Grealish – appeared engrossed in the football as the match began 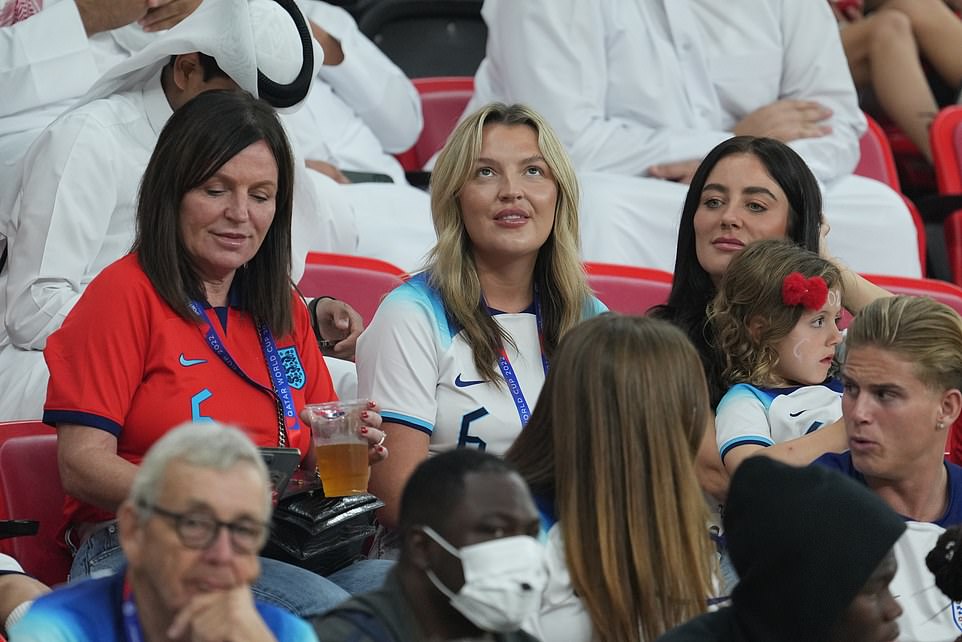 Family: Also there to cheer on the players were Harry Maguire’s partner Fern Hawkins (far right) ahead of the next Group B clash 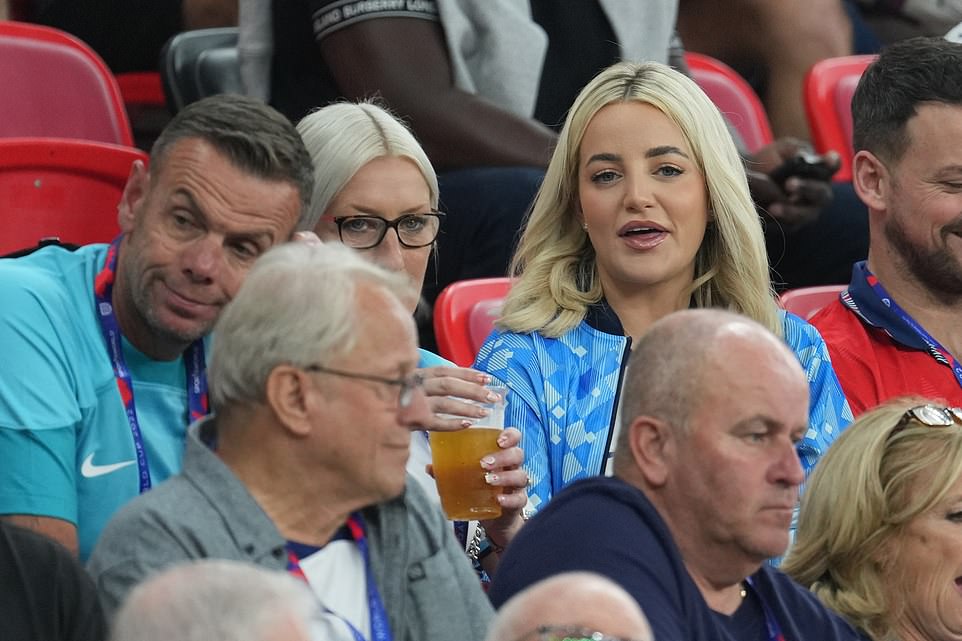 Ready for the match: Jordan Pickford’s partner Megan Davison (left) wore a blue England shirt as she sat with her family to watch

As the action began, England had already scored a victory at kick-off with its fans outnumbering the Wales supporters by three to one inside the 42.000-seater Ahmad bin Ali Stadium.

Gareth Southgate’s Three Lions have won the last six matches against their rivals, but Rob Page’s men, led by talisman Gareth Bale, need their first win over England since 1984 and other results to go their way.

The two home nations meet for their final group B fixture, with hordes of fans having made the trip and millions more watching back home. 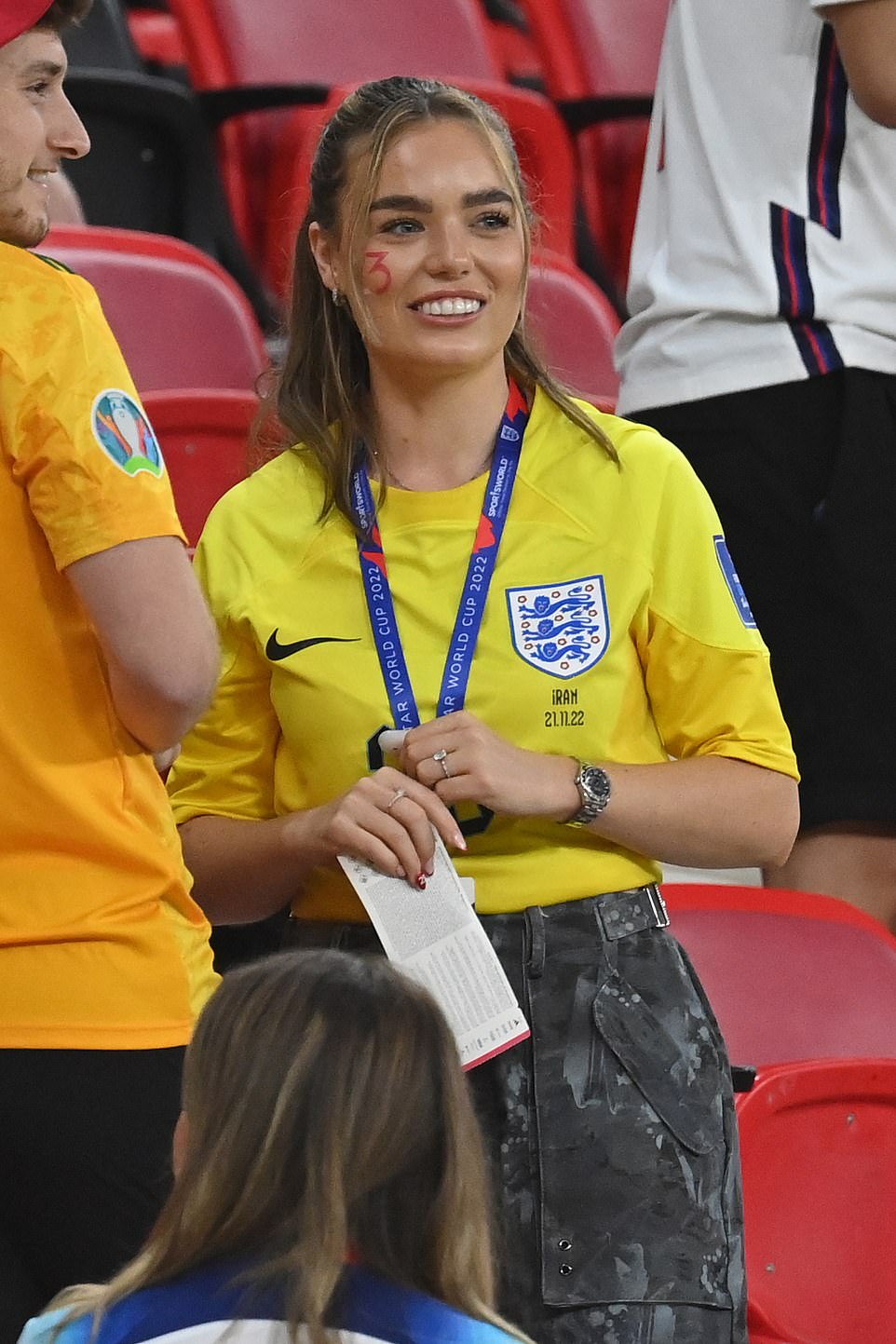 WAGSs: Declan Rice’s girlfriend Lauren Fryer and Aaron Ramsdale’s fiancée Georgina Irwin (pictured) were also in attendance at the match as they soaked in all the football action 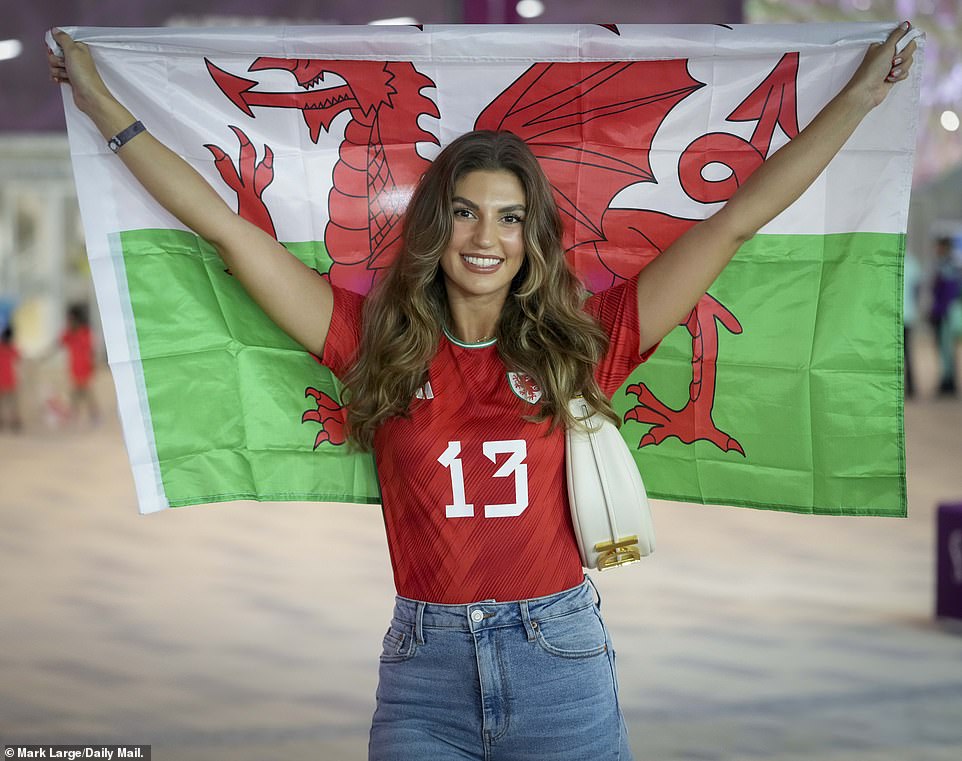 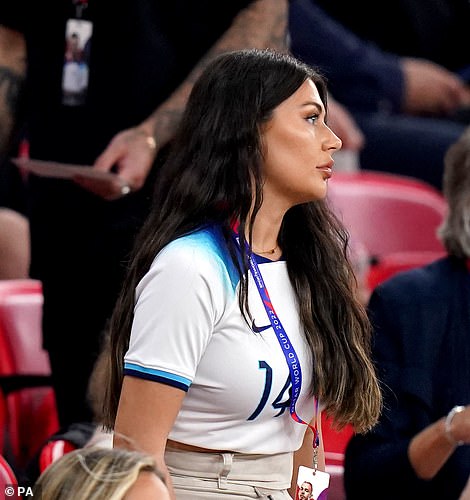 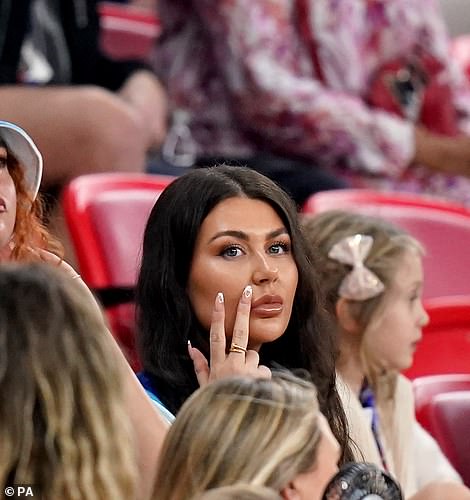 Glam: Ashleigh Behan -the girlfriend of England’s Kalvin Phillips – is pictured in the stands 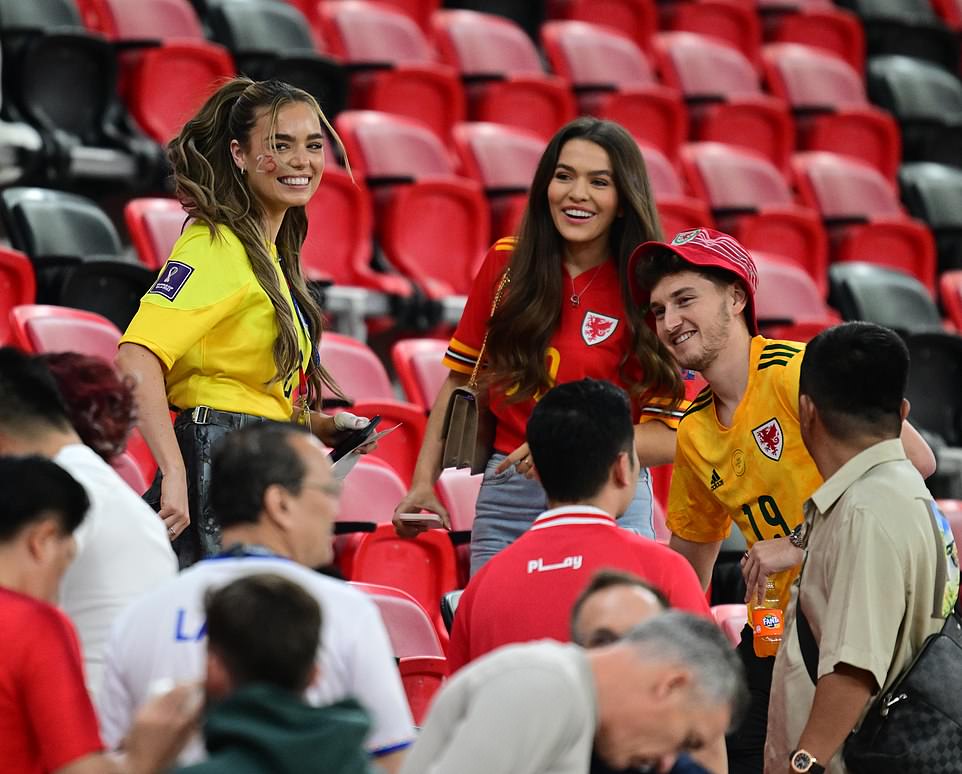 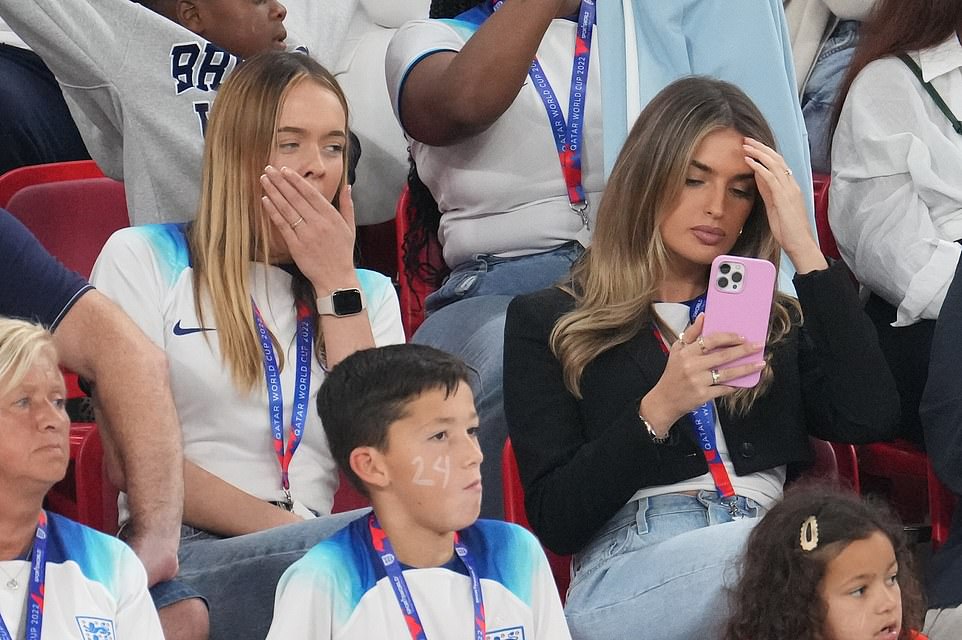 Bored? Sasha was later seen glued to her phone as the match went on

Chants between the two sets of fans even extended to the metro, where one Canadian passenger said his country had banter with the US, ‘but not like this’.

At an investiture ceremony, the King told former Sunderland star Gary Bennett he ‘just wanted a good game of football’ when asked who he would be supporting.

Downing Street said Rishi Sunak would be supporting England, but hoped both teams could advance ‘as far as possible’ in the competition.

The Three Lions currently top the group and need just a point to guarantee their progress to the knockout stages, while Wales must win and hope for a favourable result between Iran and the USA. 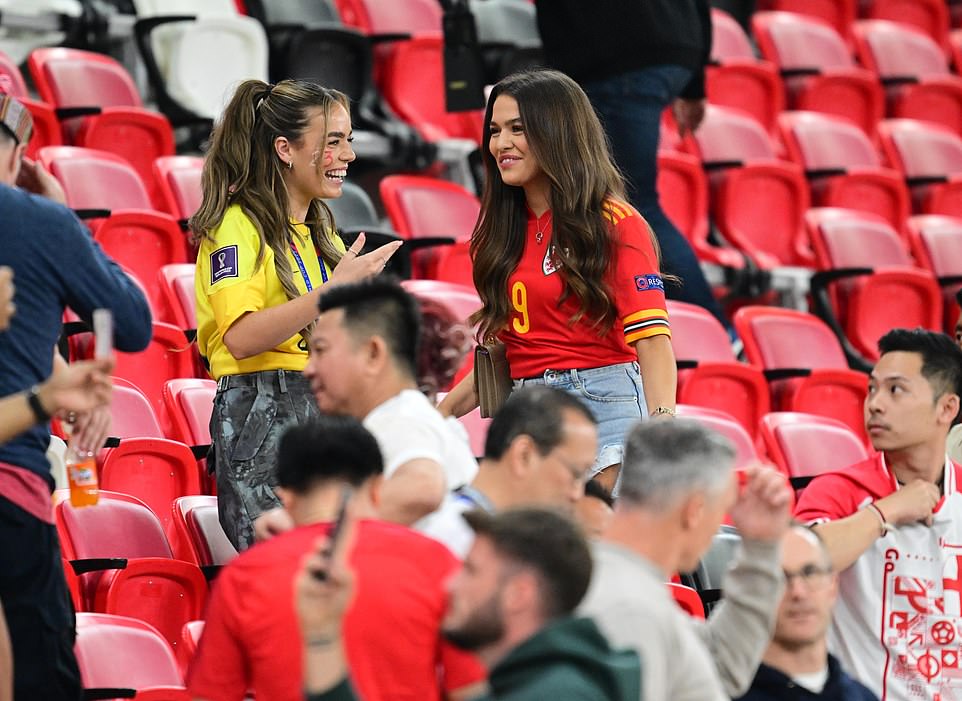 Exciting: As the action began, England had already scored a victory at kick-off with its fans outnumbering the Wales supporters by three to one inside the 42.000-seater Ahmad bin Ali Stadium (pictured – Georgina Irwin chats to the partner of David Brooks) 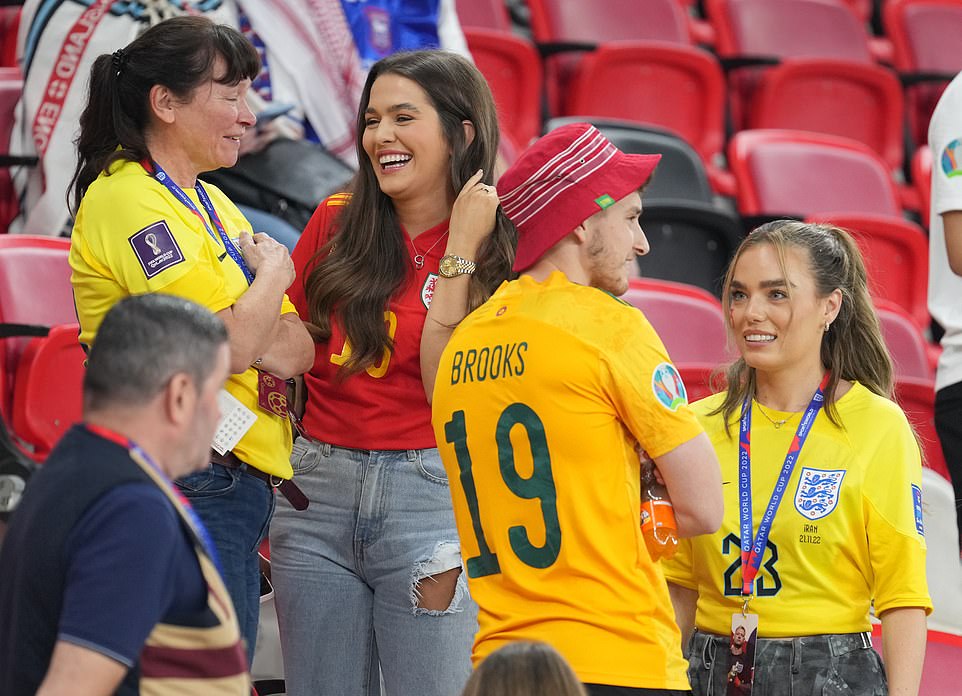 Yay! The Three Lions currently top the group and need just a point to guarantee their progress to the knockout stages, while Wales must win and hope for a favourable result between Iran and the USA

In Doha, the Welsh fans were in fine voice before the game, with some England fans spotted having flags painted on their faces.

Chants of ‘Wales, Wales’ were soon met with the response of ‘World Cup winners, you’ll never sing that’ as fans gradually made their way into the stadium.

Wales fan Huw Godfrey, 50, and England supporter Amy Godfrey, who married after meeting in London 25 years ago, joked they will still be on speaking terms whatever the result.

‘The children are never quite sure ‘do we support England, do we support Wales’ so we’ll see – they can support whoever wins,’ Mrs Godfrey told the PA news agency. 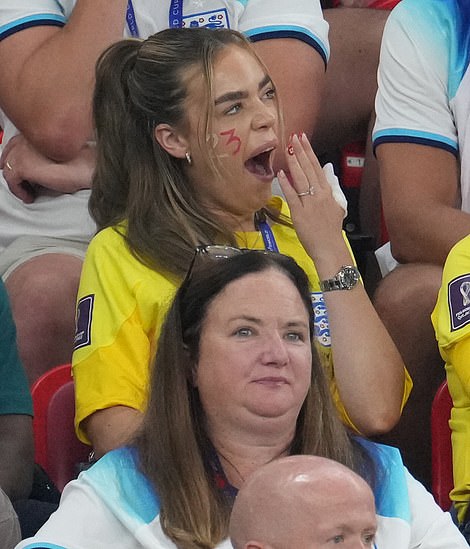 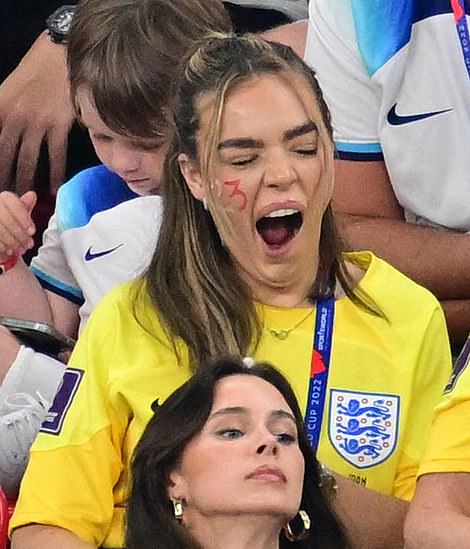 Tired? Georgina Irwin risked a quick yawn before the start of the big match held in Qatar on Tuesday night

One Wales fan made a last-minute decision to fly to Qatar to watch the game without telling his girlfriend.

David ‘Dai’ Jones from Pontypridd, South Wales, could not resist travelling to the game – despite receiving an ultimatum from his partner of 11 years.

The 33-year-old electrician said: ‘I thought she might get over it in time, but I never would, so I made the decision to come.’

Supporters from both nations began preparation for the game early today at the Red Lion pub in Doha, which has become a popular haunt for supporters of both teams. 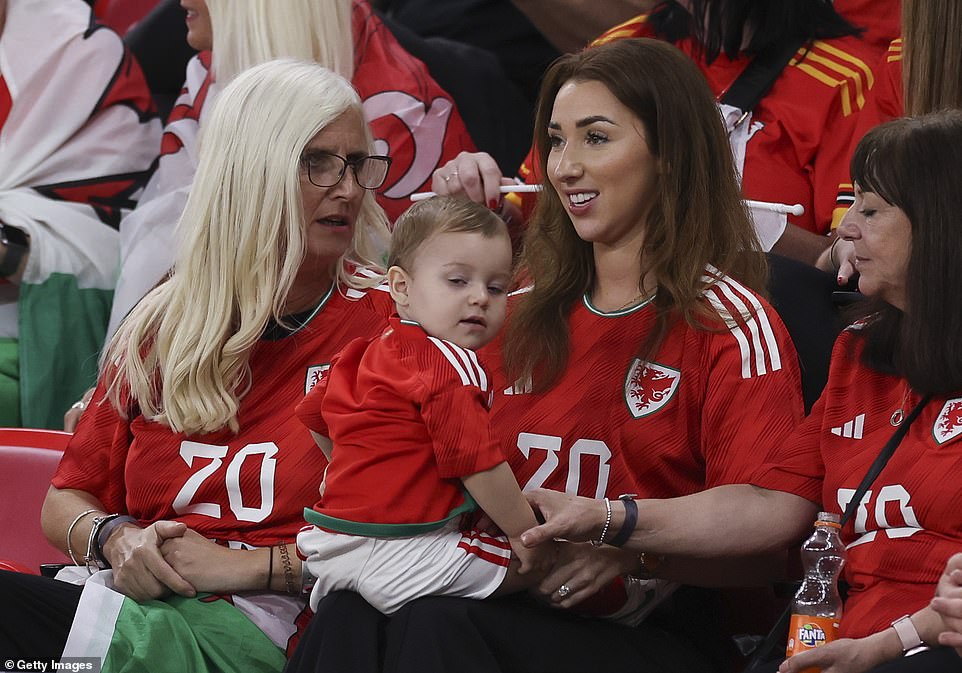 Cute! Ria Hughes, girlfriend of Daniel James of Wales is seen before tonight’s Group B match between Wales and England

England fan Mick Martin, 62, from Aylesbury, said Wales are a ‘wounded animal’ but added: ‘We should be good enough.

‘If we’re not good enough to beat Wales or get a good result against Wales we really shouldn’t be here, should we?’

Wales supporter Mike Gristwood, 52, from Swansea, said he and his friends were feeling ‘slightly nervous’ ahead of the match.

‘But we’ll be singing our hearts out later and we’ll be that 12th man that gets our boys over the line,’ he said. 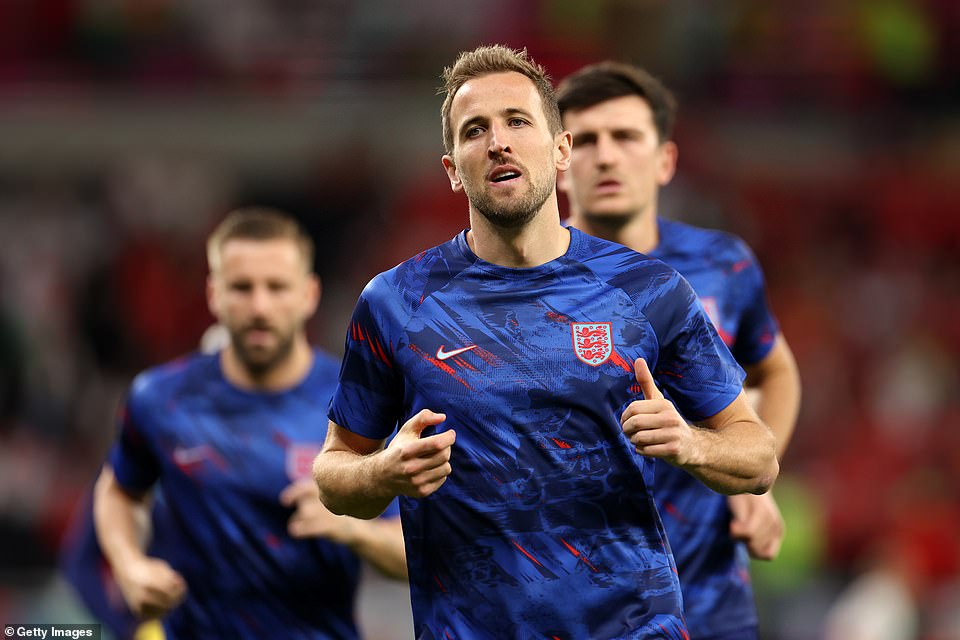 Getting going: England’s captain Harry Kane warms up ahead of this evening’s game against Wales at the World Cup in Qatar 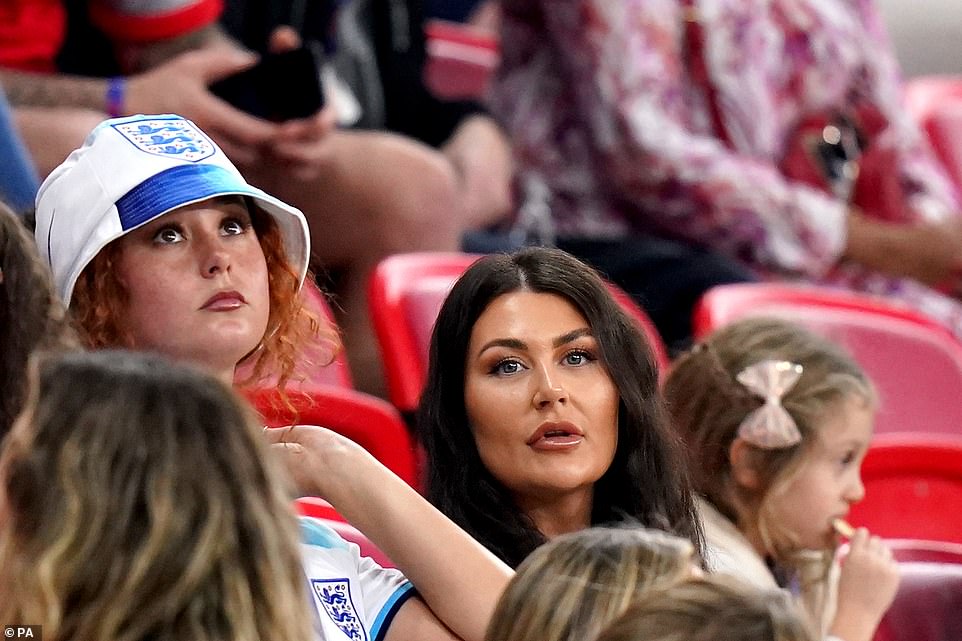 Looking on: Ashleigh Behan – the girlfriend of England’s Kalvin Phillips – was in the crowds for the big match

England fan Ian Carter, 45, who lives in Llanelli, was heading to the game with his Wales-supporting nephew James Millar and father-in-law Paul Jones after the trio flew in from Dubai.

On the decision to travel to Qatar, Mr Carter said: ‘It was over the breakfast table and we said ‘sod it, shall we just go?’ and it was a case of you’ve got the missus to talk to and stuff, but it was an easy decision – being from a Welsh and English mix, for us it was a perfect storm.’

Elsewhere, Chief Constable Mark Roberts, the UK’s football policing lead, said there had been no arrests or incidents in the opening nine days of the tournament and praised England and Wales fans for their ‘exemplary’ behaviour. 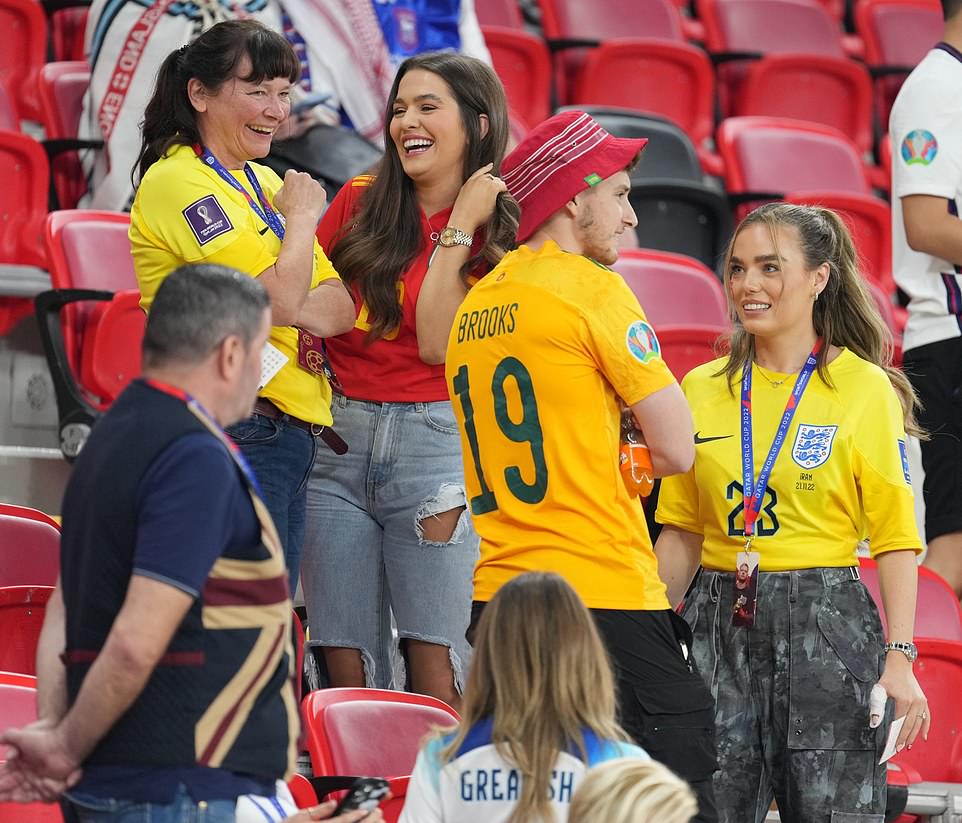 WAGs are out in force: Aaron Ramsdale’s partner Georgina Irwin is pictured and the partner of David brooks in the row behind her 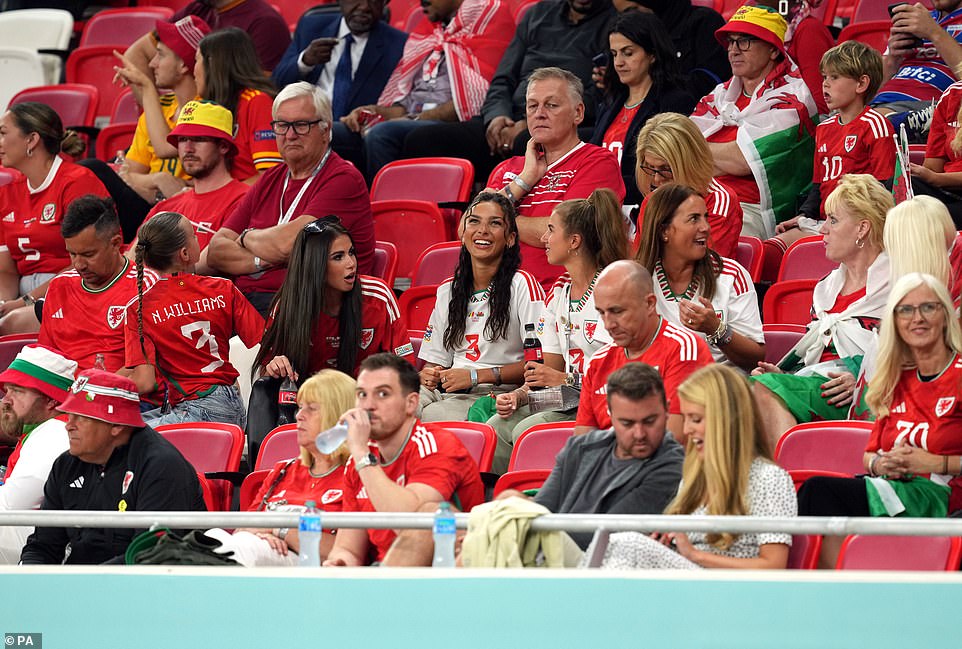 All smiles: Family and friends of Wales’ Neco Williams in the stands during the FIFA World Cup Group B match 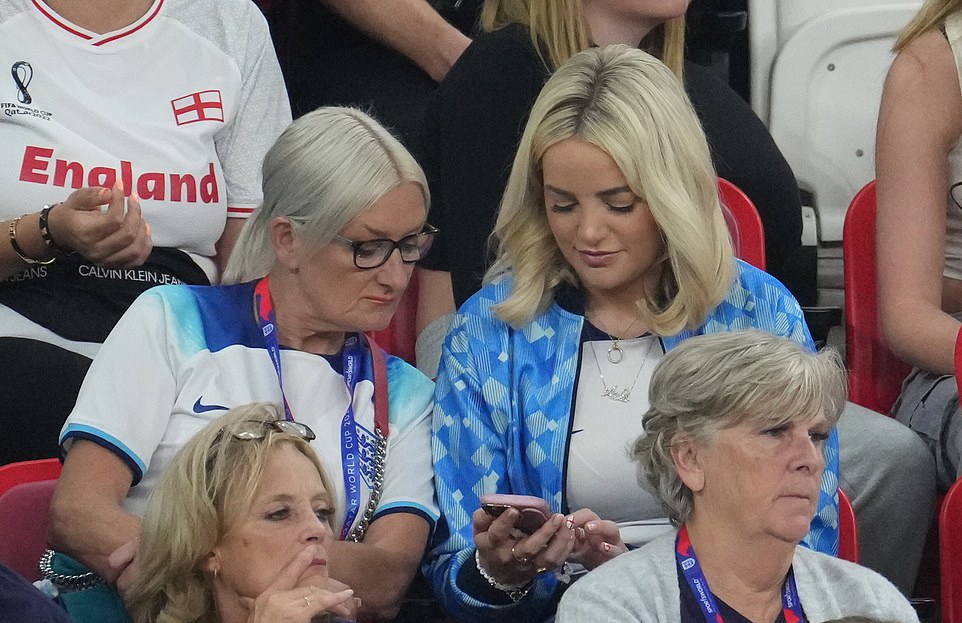 Goalkeeper: Jordan Pickford’s wife Megan Davison was in the stands and was engrossed in her phone during the match

He said the lack of trouble at the Qatar World Cup, which he believed was in large part due to alcohol being less available, was a sign that ministers should resist calls to ease restrictions on drinking in UK football grounds.

It comes as police in Tenerife said they would be launching a major security operation to prevent any possible violence during the England and Wales game.

Video footage emerged of a brawl outside bars on the largest of Spain’s Canary Islands on Friday evening, with people wearing England and Wales shirts involved.

UK police fear people prevented from travelling to Qatar for the World Cup may have been involved in the incident in Tenerife but added they have yet to confirm this. 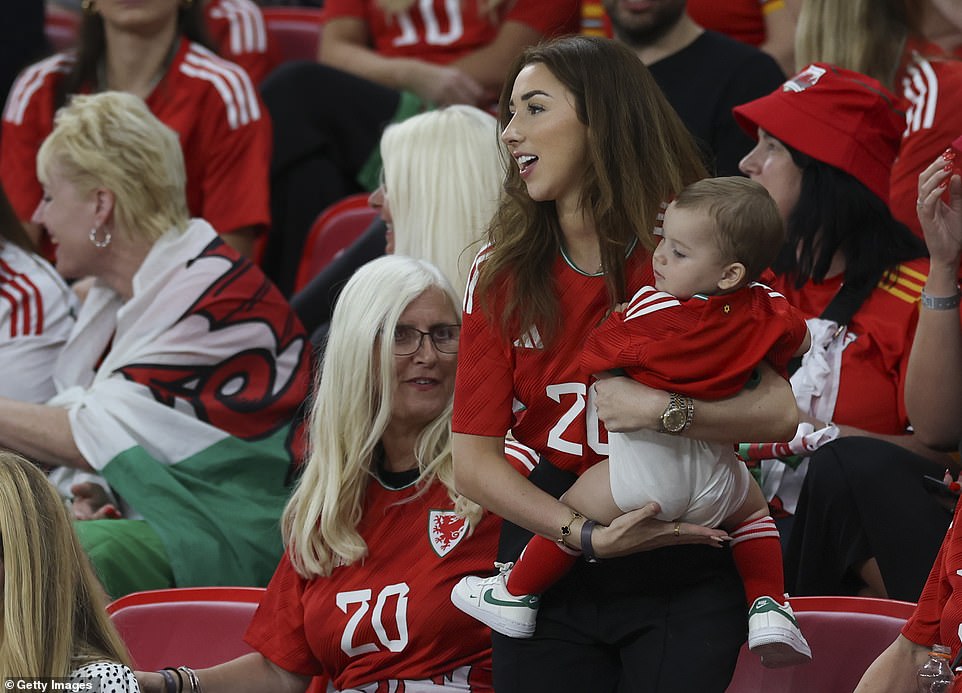 Little one: Ria Hughes, the girlfriend of Daniel James of Wales is seen during the FIFA World Cup Qatar 2022 Group B match between Wales and England