Manchester United star Harry Maguire was arrested by a team of undercover police  drafted in from mainland Greece to target organised crime in Mykonos, police sources have revealed.

The officers are on the popular tourist island to crack down on drug dealing and are specially trained in anti-corruption and bribery – an accusation levelled at the 27-year-old England star, as reported by The Sun.

In an explosive BBC interview on Thursday Maguire claimed he thought he was being kidnapped by fake police in Mykonos and tried to run away ‘in fear for his life’.

The incident was sparked after claims that the England star’s sister had been injected with substance by two Albanian men as they waited for a minibus in the Fabrika part of the island.

A source close to the player said: ‘If these are anti-corruption police, what are they doing being called to an incident outside a bar?’ 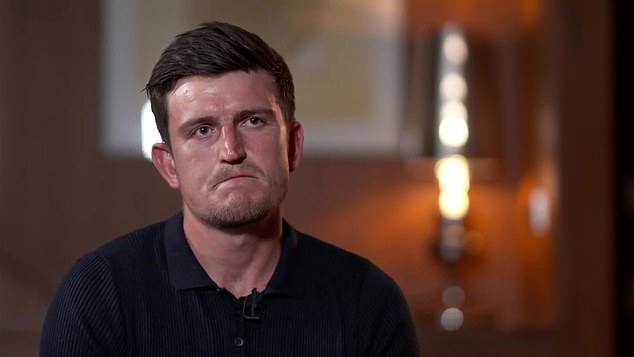 The island is a popular tourist destination and attracts more than three million people every year. But it also brings organised crime gangs who offer drugs and prostitutes.

Greek crime reporter Giorgos Sombolos told The Sun: ‘Mykonos is a paradise for anyone who wants to spend money. It’s a show-off town, and a perfect place to launder cash.

It comes just days after Maguire sat down for his first interview since he was handed a 21-month suspended prison sentence following a brawl on the Greek island last week.

The England defender announced on Wednesday that he is appealing the decision made against him in a court on the Greek island of Syros and now faces a retrial.

Maguire, who asked the BBC to keep his current location secret, vowed to fight to clear his name and declared: ‘I’m really confident the truth will be told.’ 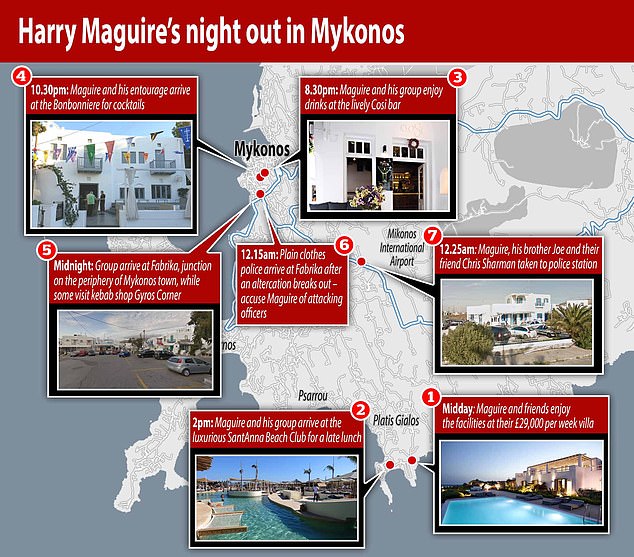 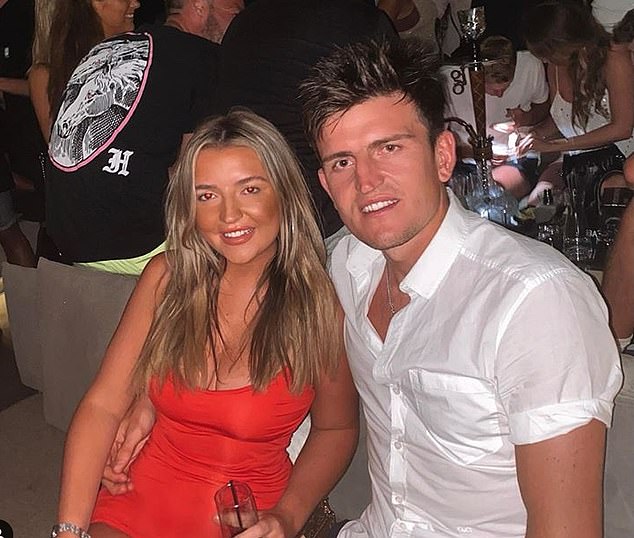 Speaking about his clashes with police, he said that plain-clothed officers pulled over the group’s minibus and threw him off. He claimed he tried to run away with one handcuff on because he feared for his life.

A shaken Maguire said: ‘My initial thought was that we are being kidnapped. We got on our knees and put our hands in the air and then they just started hitting us in the legs saying my career’s over, no more football, you won’t play again.

How long will Maguire’s appeal process take and what will it involve?

Maguire’s club Manchester United today confirmed their superstar defender had filed an appeal against his conviction in the Greek courts yesterday.

The footballer’s legal team will have drawn up a Statement of Appeal and then submitted it to the court in Syros where the trial was heard.

The appeal is forwarded to the public prosecutor and then you are set an appeal date – essentially a retrial – at court.

However this process can take between one and three years depending on certain variables such as whether the defendant is in custody.

Maguire’s legal team can call on new evidence for the appeal. His defence team has already they hope crucial video and medical evidence will absolve the superstar player.

The father-of-two’s conviction yesterday will now ‘lie idle’ until the outcome of his appeal, which could take up to three years.

This means that although his initial conviction stands, he will not be given a criminal record because the case has not finished.

If he loses his appeal, his conviction will become definitive and he will receive a record.

Prosecution lawyer Ioannis Paradissis told MailOnline: ‘The verdict and the convictions stand. And they are valid. But they are idle because of the appeal that has been lodged.

‘If the defendant gets acquitted then all charges are dropped. If he does not then he will get a criminal record .

‘Harry does not have a criminal record now because the process is ongoing, not because he has been acquitted or cleared of any charges.’

As per international travel, Paradissis said there was never any issue of him being barred from travelling.

‘And at this point I thought there was no chance these are police, I don’t know who they are, so I tried to run away, I feared for my life.’

The England star insisted he hadn’t done anything wrong and didn’t own an apology ‘to anybody’, after the Greek prosecutor called for one.

Maguire said: ‘I don’t feel like I owe an apology to anybody, an apology is for when you’ve done something wrong.

‘I regret being in the situation. Obviously the situation’s made it difficult, I play for one of the biggest clubs in the world so I regret putting the fans and the club through this.’

The world’s most expensive defender also denied claims he bribed police officers calling the statement read out in court ‘ridiculous’.

Maguire was asked by the BBC’s Dan Roan if he accepts that he was asking for trouble by going to a busy bar on the popular tourist island.

He said: ‘No it could have happened anywhere. I love Greece. I think footballers get a bit of stick for trying to stay away from everything, but its’ not how I want to live my life.’

The football star – who has been dropped from Gareth Southgate’s England squad – described what it was like spending two nights in custody.

He said: ‘It was horrible it’s nothing I ever want to do again, I don’t wish it on anybody. Its the first time I’ve ever been inside a prison.’

Prosecution lawyer Ioannis Paradissis has now slammed Maguire’s account of the events surrounding his arrest as ‘ridiculous,’ and ‘unbelievable’ and criticised the £85 million defender for his lack of apology over the events.

Mr Paradissis also criticised the BBC for not probing Maguire on the initial claims made by those in his group that Daisy had been injected with a ‘date rape drug’ by two Albanian men.

He told MailOnline: ‘I’ve seen and read what Maguire said and it’s ridiculous and only adds further insult to the harm he caused the policemen he attacked and the Greek justice system as a whole.

‘Maguire claims that he feared he was being kidnapped yet his response is to run away and call his agent, leaving behind his fiancé, brothers and sister and childhood friends. Even if you accepted this as true, which I don’t, these are not the actions of an honourable man.

‘If I was his fiancé or any of the others in the group, I would be very angry with him for leaving them behind and would want him to do some explaining.’

He added: ‘Maguire claims that when the minibus stopped, he did not know that it was outside a police station. 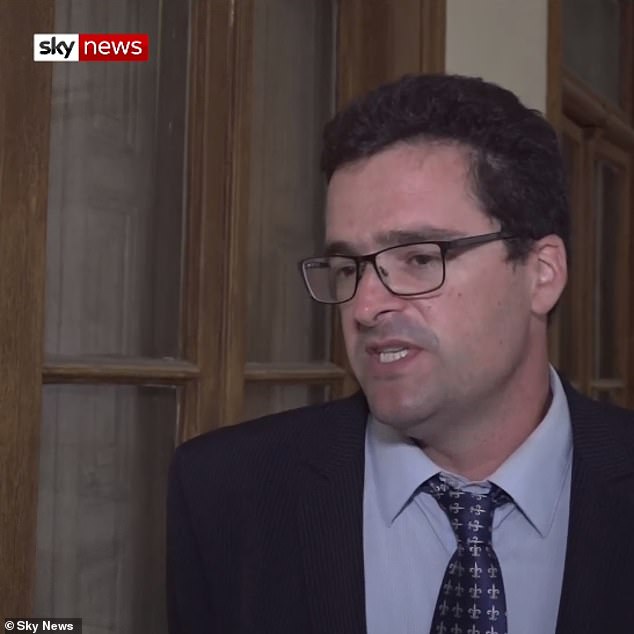 Prosecution lawyer Ioannis Paradissis has now slammed Maguire’s account of the events surrounding his arrest as ‘ridiculous,’ and ‘unbelievable’ and criticised the £85 million defender for his lack of apology over the events

‘I would urge all people to have a look at Mykonos police station. It is clearly obvious what this place is either during the day or night.

‘There are many police cars parked outside it at night, there is a sign stating that it is a police station and there are officers coming in and outside of the building.

‘The only way you would not be able tell if it was not a police station is if you are very drunk.

‘But clearly, he was not that drunk, because according to him he was able to fight off a group of men who he thought were kidnappers and try and escape.

‘If he had the clarity of mind to do that then obviously, he would have also been able to see that the minibus had pulled up outside a police station.’