The daughter of an actress set to star in a West End play has spent four years waking up every morning believing she is in France.

In 2013 Tansy Smethurst, 13, from Greenwich, south-east London, was on holiday with her family, including her mother Rakie Ayola – who is set to play Hermione in the Harry Potter and the Cursed Child play – when she developed spots on her body and was rushed to hospital.

Scans revealed the teenager had a brain cyst, known as Neurofibromatosis type 1, which she had removed only to develop a serious infection that has left her with severe memory loss.

Four years later and despite undergoing 12 operations, Tansy can still only remember up to the day before she went on holiday and constantly bombards her devastated family with the same questions.

Rakie, 48, said: ‘She still has memory issues, for example when we drive to see family in Wales she will ask several times on the journey where we are going.

‘There are moments when someone asks how you are and you burst into tears.’

WHAT IS NEUROFIBROMATOSIS TYPE 1?

Neurofibromatosis type 1 (NF1) is a genetic condition that affects one in 3,000 people in the UK to some extent.

It is caused by a genetic mutation that affects nerve tissue growth.

Around half of cases are inherited from a parent and the remainder occur spontaneously.

It is also associated with mild learning difficulties.

Most people with NF1 are otherwise healthy and live to a normal life expectancy.

Surgery can be performed to remove the benign growths.

‘If something new happens she struggles’

Rakie said: ‘She couldn’t even remember her hospital room.

‘Once she was up and walking she would go to the bathroom and come back and not recognise her room – even though hers was the one decorated with balloons and the room next door was empty. She had no clue.

‘I noticed one time she only identified her room because my coat was there and she remembered my coat.

‘Even now, if something new happens she struggles. Routine is very good for her.

She said: ‘As she gets older it becomes more apparent that she has challenges with cognitive skills.

‘She still has some memory issues, for example when we drive to see family in Wales she will ask several times on the journey where we are going.’

Rakie said: ‘I’d never heard of the condition before Tansy was diagnosed.

‘Tansy is very well now but from August to December 2013 she had 12 brain surgeries. She was so brave.

‘We thought the spots were due to having a dual heritage, I’m black British and Adam  (Tansy’s father) is white.

‘We never thought it could be a sign of a genetic disorder.’

After having an operation to remove the cyst, Tansy developed a serious infection and was left with severe short-term memory loss.

She was also diagnosed with the genetic disorder NF1, which causes benign tumours to develop on nerve endings throughout the body. 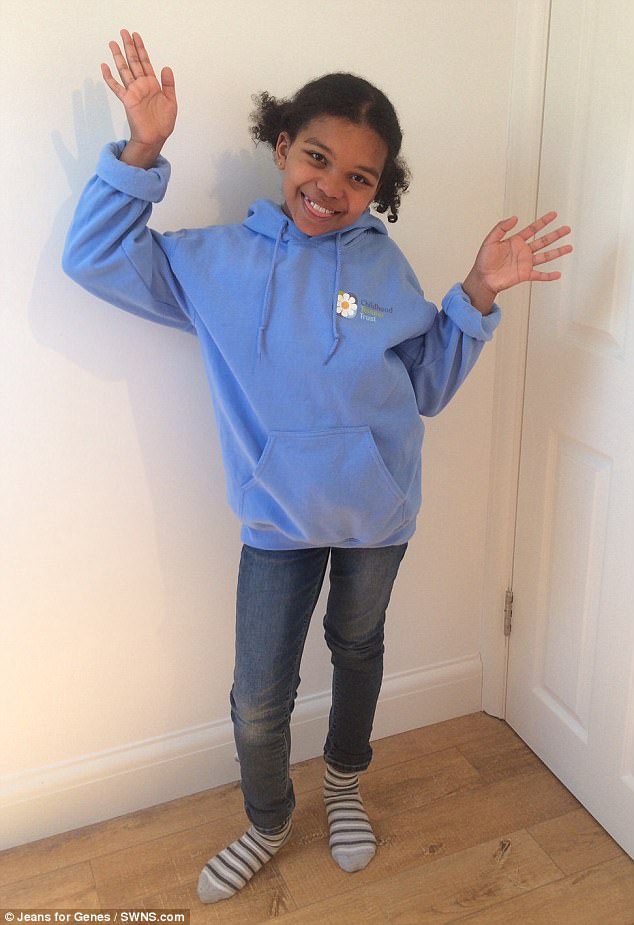 Tansy Smethurst got an infection after having a brain cyst removed, causing memory loss

‘It hits you unawares in all sorts of ways’

Tansy was referred to Guy’s Hospital, where her parents discovered more details of her condition.

Rakie said: ‘Things started to slot into place after that. At primary school Tansy had been tested for dyslexia, but the results came back that although she didn’t have dyslexia, she had some difficulties with comprehension.

‘It linked into the learning difficulties that are another potential symptom.

‘We had to cope. There are moments, particularly when you least need it such as on the school run when someone asks how you are and you burst into tears.

‘It hits you unawares in all sorts of ways. I was emotional and angry too.

‘I was angry at a lot of people, angry at the nurses, I was constantly apologising and crying too.’

Tansy had to endure numerous surgeries after her diagnosis, each of which left her delirious and unable to remember beyond the day before she went on holiday to France.

Yet, despite her ongoing memory problems, a recent scan revealed Tansy has largely recovered.

The pair are supporting Jeans for Genes day on September 22.