All Creatures Great and Small star Robert Hardy had only £165,000 in his will.

Hardy, who died in August last year, had three children named Emma, Paul and Justine, and a godson named Neil Robertson. The four inherited his estate, reports The Daily Express.

Robert was was married twice, with both relationships ending in divorce. He was first married to Elizabeth Fox, a wardrobe mistress, in 1952, before he wed Sally Pearson. The couple divorced after 25 years together.

Robert Hardy, (pictured centre as Siegfried Farnon in the television show All Creatures Great and Small), left just £165,000 in his will after his death in August last year 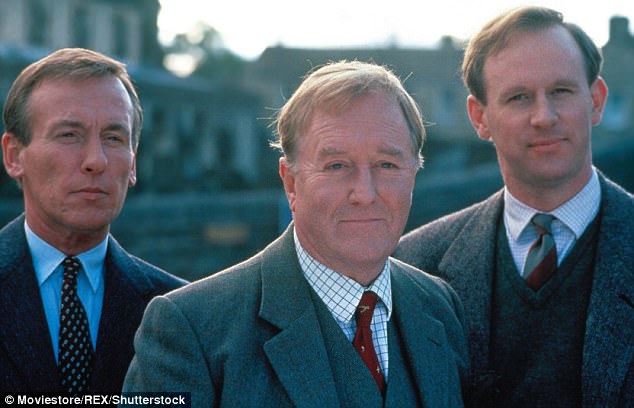 Hardy had three children named Emma, Paul and Justine, and a godson named Neil Robertson. The four inherited his estate (Hardy pictured with Christopher Timothy and Peter Davidson in All Creatures Great and Small) 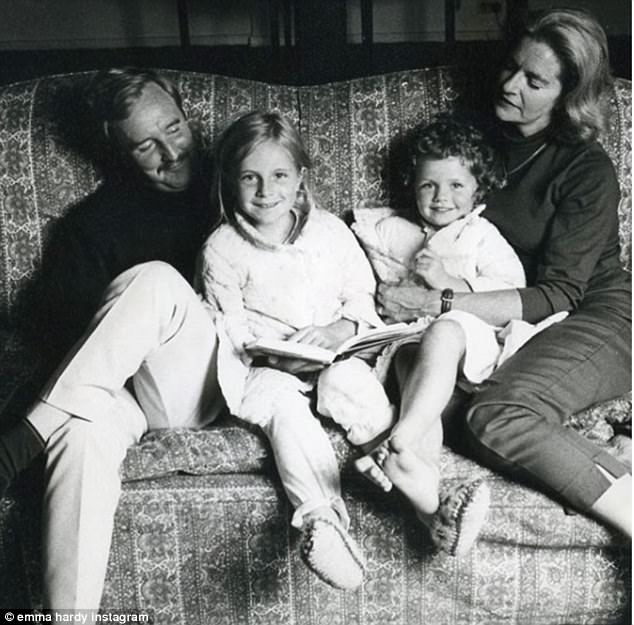 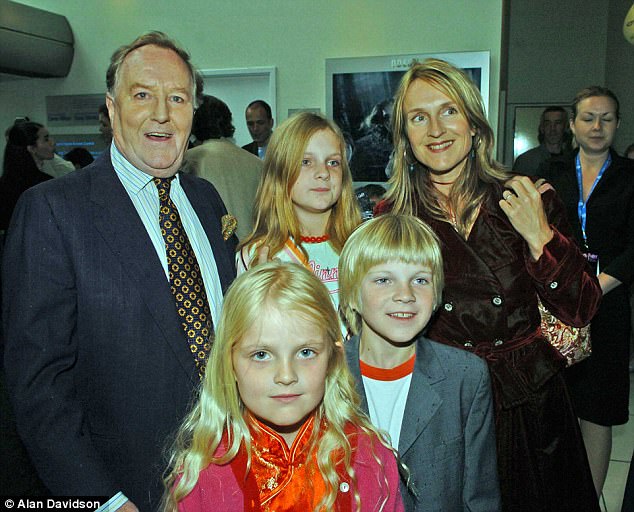 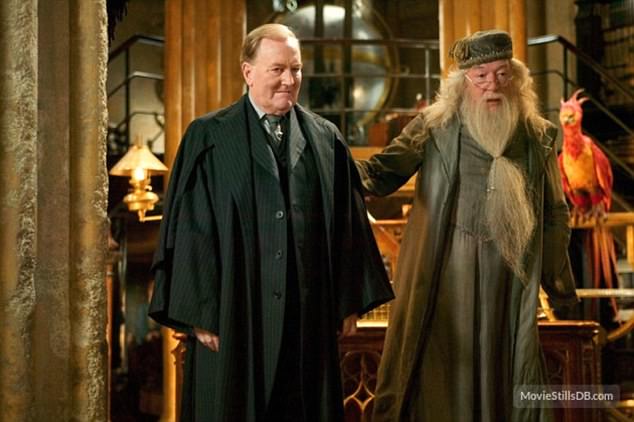 The actor also played Cornelius Fudge in the Harry Potter movies. He is pictured with Michael Gambon, who played Dumbledore

The family of All Creatures Great and Small star Robert Hardy have paid tribute to the ‘gruff, elegant, twinkly, and always dignified’ actor following his death aged 91.

The actor was best known for his roles as vet Siegfried Farnon in the BBC show, which was popular in the Seventies and Eighties, and as Minister for Magic Cornelius Fudge in the Harry Potter franchise.

In a statement announcing his death this afternoon, Hardy’s children, Emma, Justine and Paul, described their father’s life as ‘tremendous’.

He had a career in stage, television and film which spanned more than 70 years. 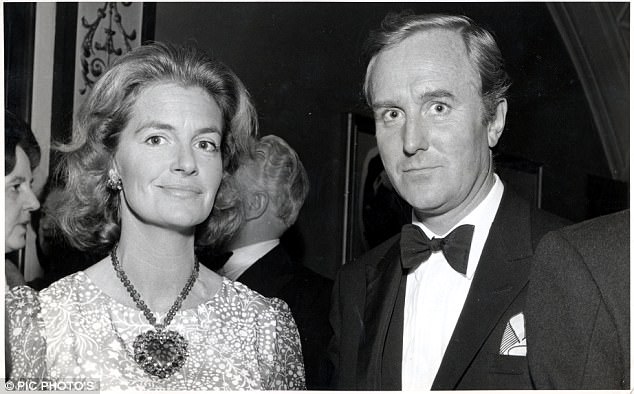 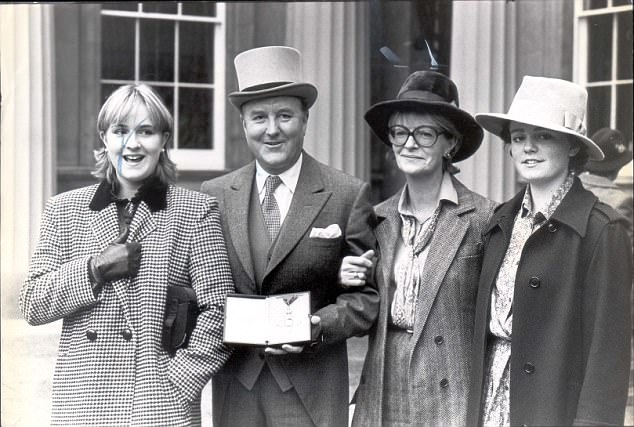 Paying tribute after his death in August last year, Hardy’s children said: ‘Dad is remembered as a meticulous linguist, a fine artist, a lover of music and a champion of literature, as well as a highly respected historian, and a leading specialist on the longbow.

‘He was an essential part of the team that raised the great Tudor warship The Mary Rose.

‘He is celebrated by all who knew him and loved him, and everyone who enjoyed his work.’

The statement added: ‘We are immensely grateful to the team at Denville Hall [a home for retired actors] for the tender care they gave during his last weeks.’ 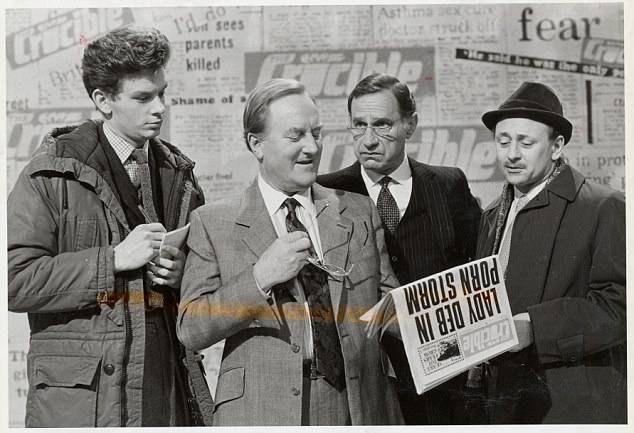 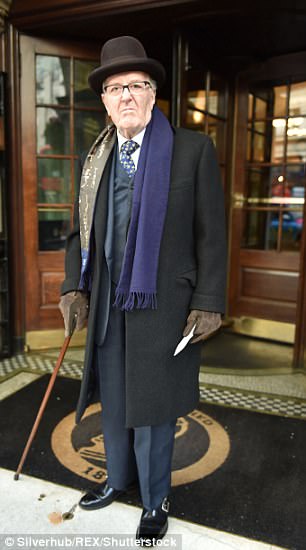 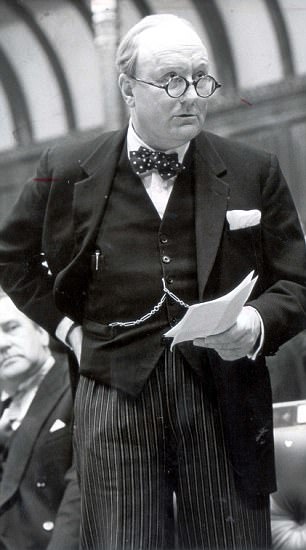 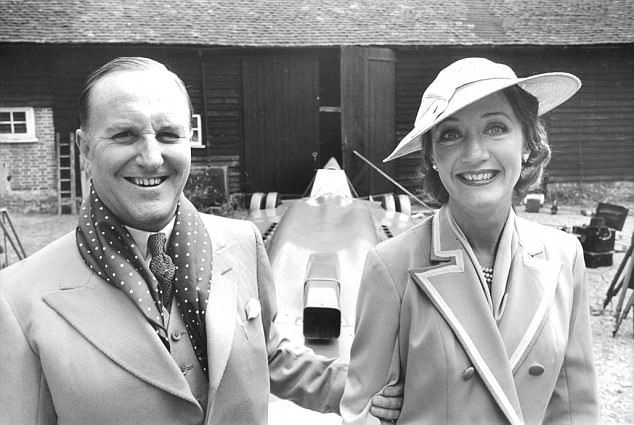 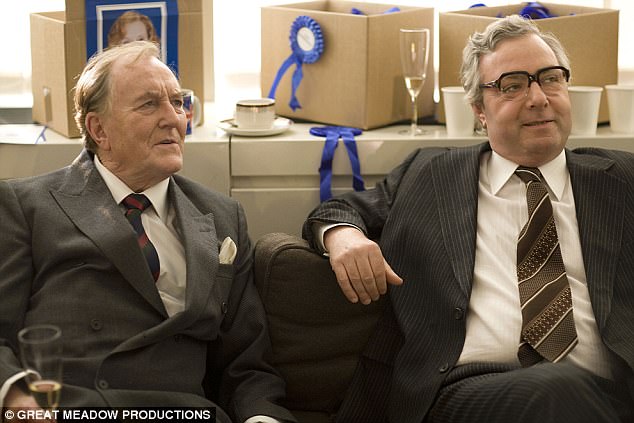 Hardy as Willie Whitelaw in the 2009 production of Margaret, alongside John Sessions as Geoffrey Howe. The film was a biopic of Thatcher’s life

He said: ‘I was very sad to hear about Robert today, he played a big part in something that was an important phase of my life.

‘We did meet up last year at a Herriot function and although he looked frail he still had his wit and humour. Great to see him.

‘He has left an unbelievable legacy of fantastic work for many generations to enjoy and appreciate.

‘A fascinating man, he didn’t suffer fools I can tell you, but he was a good fellow.

‘Prince Albert and of course Campbell were just two of the performances that stick in my mind.

A familiar household face, Hardy was also known for his roles in TV shows Middlemarch and Little Dorrit, and took on the role of former British prime minister Winston Churchill in Churchill: 100 Days That Saved Britain (2015) and in Winston Churchill: The Wilderness Years (1981).

The Bafta-nominated star, from Cheltenham in Gloucestershire, was also awarded a CBE for his services to acting in 1981.

One of his earliest TV jobs, in 1955, saw him take on Shakespeare as he portrayed Cassio in Othello.

Within minutes of the announcement of his death, a Tweet from London’s Westminster Abbey read: ‘Robert Hardy read from Henry the Fifth at our 600th Anniversary of the Battle of Agincourt service in 2015. RIP.’ 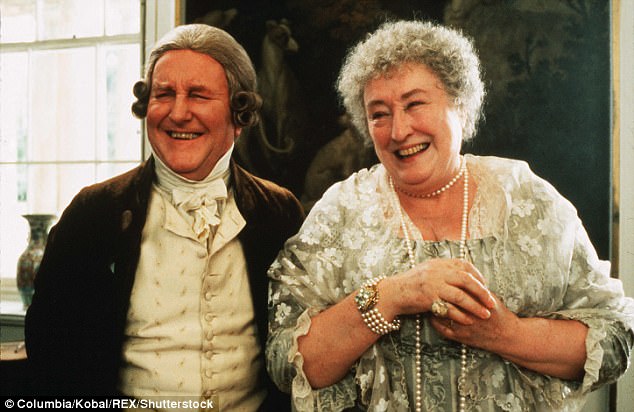 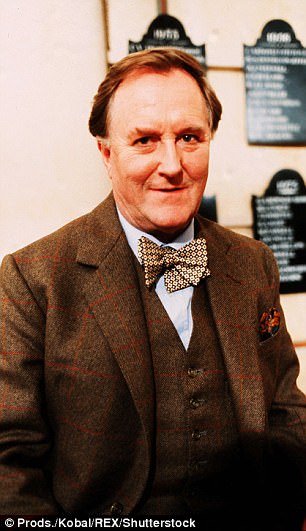 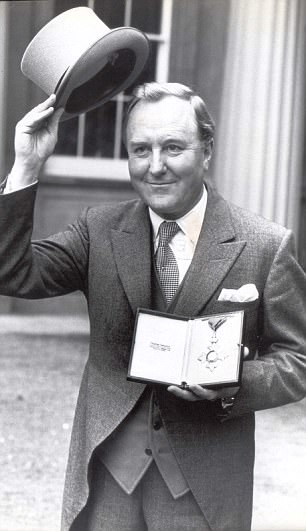 Hardy is pictured left as the Headmaster in the 1995 comedy A Feast At Midnight. Right is when he received his CBE in 1981

Born in 1925 in Cheltenham, Gloucestershire, to Jocelyn and Henry Harrison Hardy, the headmaster of Cheltenham College, Hardy was educated at Rugby School before moving on to Oxford.

He temporarily left his studies to serve in the RAF and later returned where he eventually got a BA in English.

Hardy began his career in style working with legends such as Laurence Olivier, who he starred with in a theatre production of Coriolanus, John Gielgud, Richard Burton and Ralph Richardson.

He subsequent moved into television, starring in the BBC’s award-winning oil company drama The Troubleshooters in the Sixties to Seventies, and was cast as Siegfried Farnon, who was based on real vet surgeon Donald Sinclair, in 1978.

In 2015, the actor celebrated his 90th birthday by reading the Chorus from the prologue in Act IV of Shakespeare’s Henry V at a service at Westminster Abbey, which was held to commemorate the 600th anniversary of the Battle of Agincourt.

He also sold of his enormous collection of antiques that year in a £100,000 auction after deciding to downsize his home.

One of the most unusual items featured in the auction of his possessions was a hand-painted limewood diorama depicting the progress of the battle. 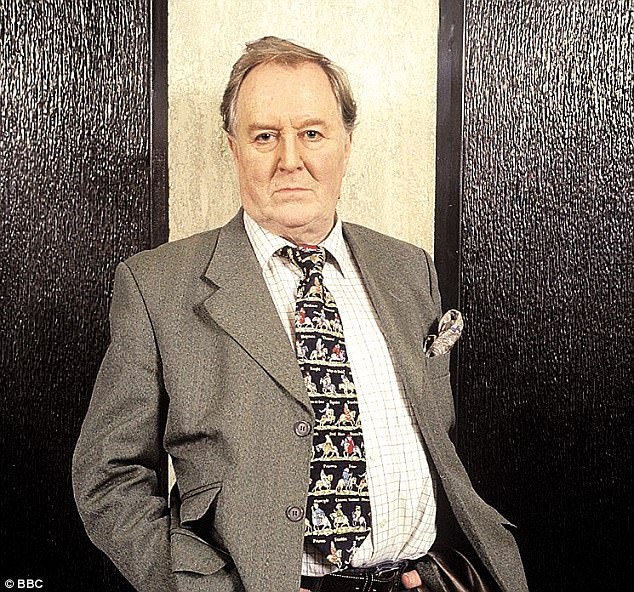 Hardy played Emperor Augustus in Radio Three’s dramatisation of ‘The Art of Love’, by Andrew Rissik which deals with a story of confrontation between the forces of change, and the established order 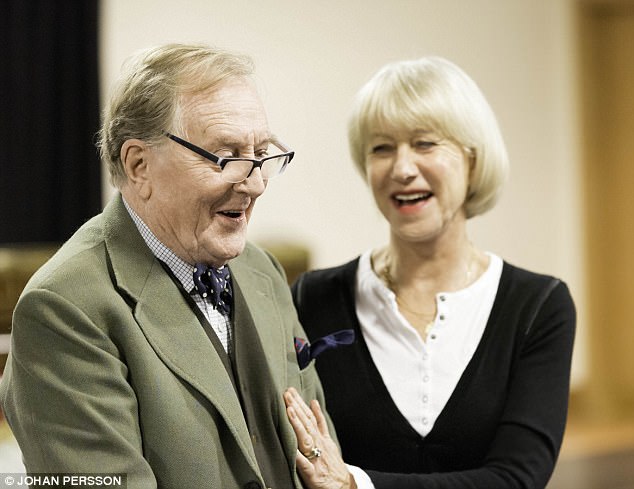 He is pictured with Helen Mirren in 2013. The pair were due to star together in The Audience at the Gielgud Theatre, London but he sadly cracked his ribs, forcing him to pull out 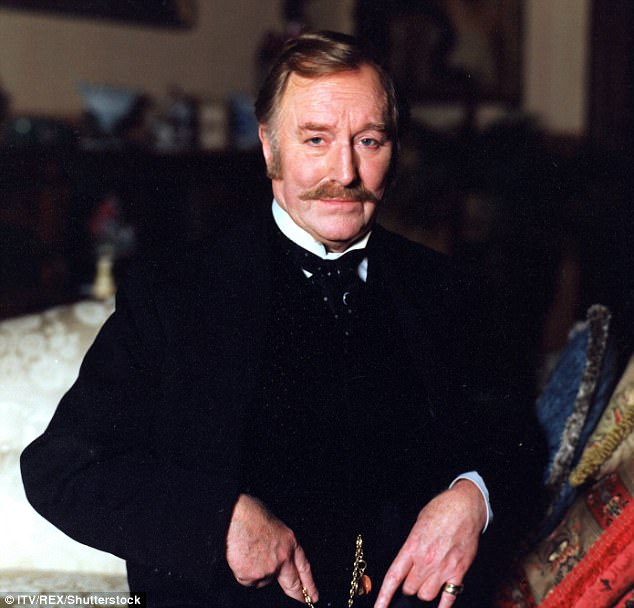 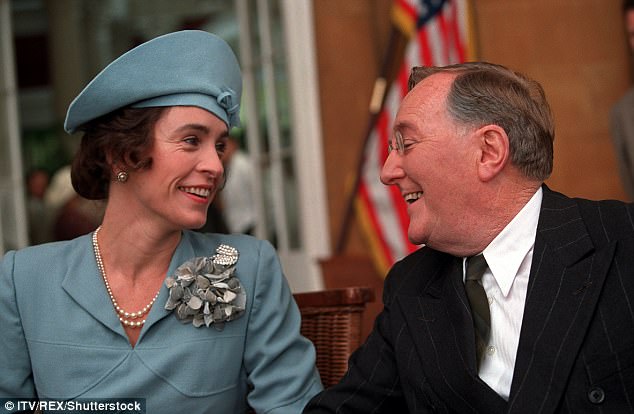 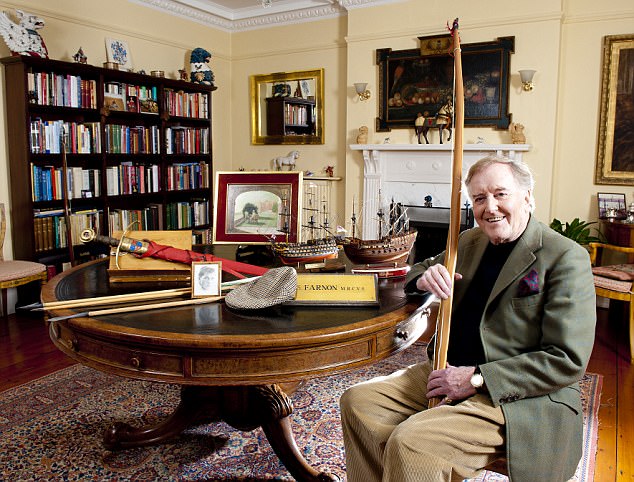 Hardy at home with some of his favourite things – two model ships, a photo of Richard Burton, a replica longbow and arrows and the cap he wore for All Creatures Great and Small 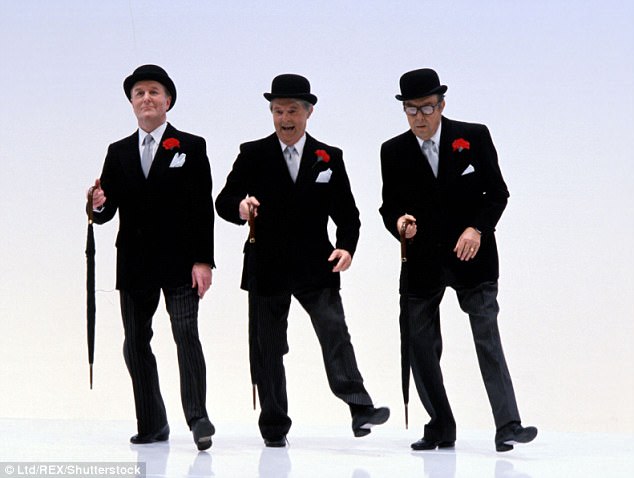 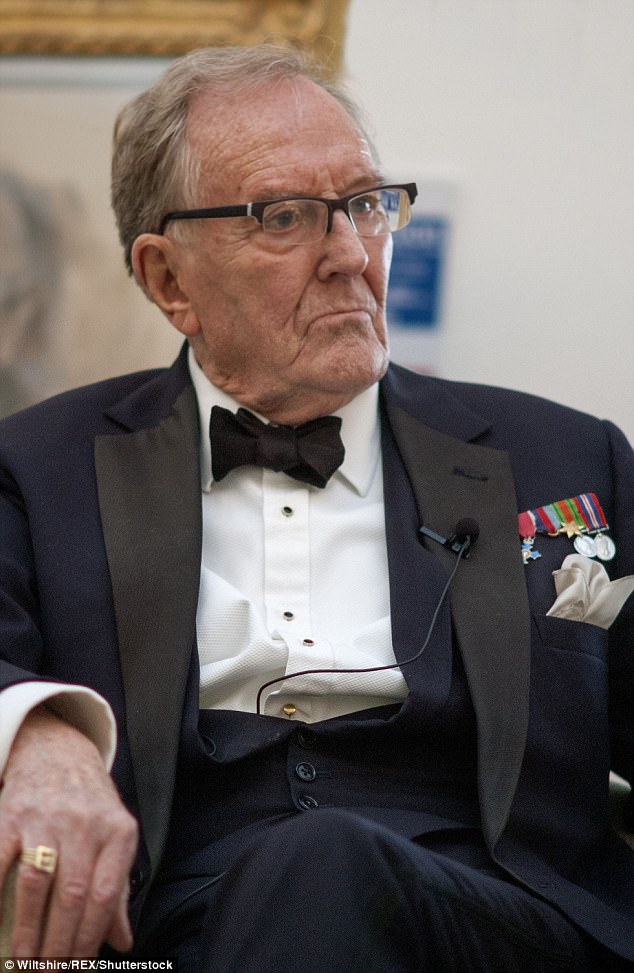