Thousands of people in southwest Sydney will be locked in their neighbourhoods, most shops shut, and construction banned.

Sydney’s numbers are again headed in the wrong direction with 111 new coronavirus cases recorded on Saturday to end the third week of lockdown.

Another death was also announced on Saturday, a man in his 80s from South-Western Sydney.

Cases dropped to 65 on Thursday after peaking at 112 on Monday, raising hopes the city could be out of lockdown on time on July 30.

But cases rose to 97 on Friday and this latest jump prompted restrictions including closing nearly all shops and tightening of movement rules.

NSW Premier Gladys Berejiklian began on Saturday by ordering Fairfield, Liverpool and Cantebury-Bankstown residents to stay in their local councils.

Residents cannot even leave for work unless they work in heathcare and emergency services until July 30 at the earliest.

Only ‘critical retail’ will be allowed to operate with all other shops ordered to close, with a list of what is allowed to open to be announced.

Carpooling was also banned across all of Sydney and all construction, non-urgent maintenance and cleaning until July 30.

A crackdown on Sydneysiders flouting lockdown began on Saturday with 130 more inspectors being deployed from Fairfield to Bondi in an effort to stem the latest Covid outbreak.

Officers from Liquor and Gaming, SafeWork NSW, the Food Authority and Fair Trading will be ensuring residents are adhering to protocol, specifically targeting the use of QR codes and wearing of masks.

The NSW Government held crisis meetings on Friday night to discuss introducing dramatic new restrictions including police checkpoints on major roads and cameras that scan licence plates so authorities can identify people who are entering areas they are barred from.

The shutdown of almost all retail stores is also on the cards amid another steep rise in venues exposed to the virus.

‘It has been conceded by the government that the current lockdown is not doing the job it needs to, so they will go harder,’ Nine News reported.

‘A few of the options are shutting retail across Sydney and forbidding certain types of work, otherwise a more localised lockdown of the Fairfield area going as far as having police checkpoints and cameras which can read number plates, fining people if they leave the area,’ Mr O’Keefe reported.

The NSW Government will hold an emergency cabinet meeting on Saturday morning to finalise plans, with non-essential retail set to be one of the first things scrapped. 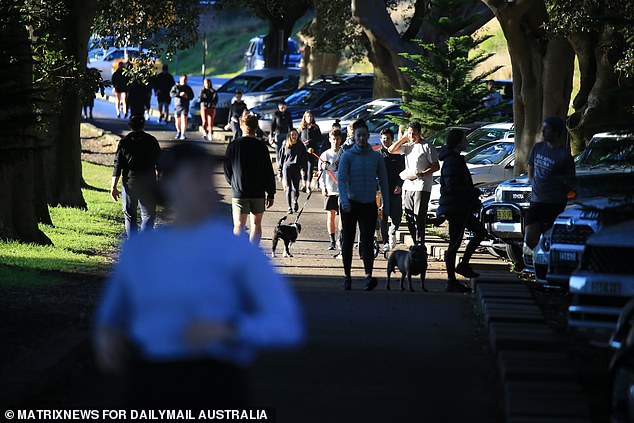 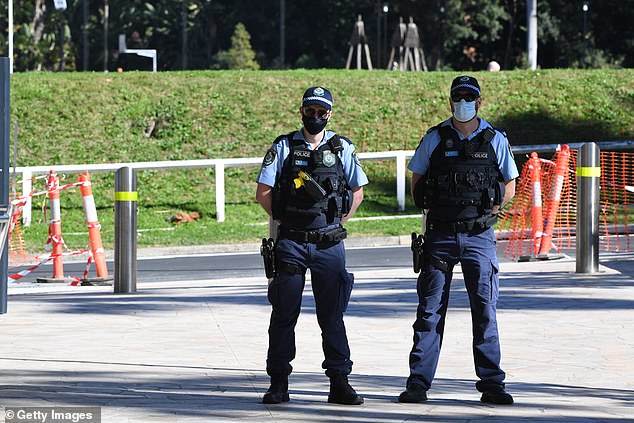 ‘The Service NSW QR code is not wallpaper, it’s there to protect your staff and customers as we battle the Delta variant,’ he said.

‘The green tick on the Service NSW app is a safety stamp — it means the contact tracers can do their job keeping the community safe.’

Mr Dominello said it was now compulsory to check in at every place of work regardless of the sector.

‘It is now mandatory to check-in at all workplaces, supermarkets and retail stores,’ he said.

‘It is vital that businesses are displaying the QR code correctly and taking reasonable steps to ensure people entering their premises check-in using their phone or digital sign-in sheet.’

Better Regulation and Innovation Minister Kevin Anderson said officials will be focusing on ensuring businesses are operating under Covid-safe guidelines.

‘Customer Service compliance inspectors will be monitoring businesses to make sure they are doing the right thing, keeping us all safe,’ he said.

‘We know complying with new rules can be tough, which is why we will be working closely with businesses over the coming weeks to help them understand the new requirements and ensure Covid-safe practices.’

The Government is also looking at cracking down on the local government area of Fairfield in particular as they consider reducing the amount of time residents are allowed to exercise outdoors and the distance they are allowed to travel.

Half of the currently unlinked 169 cases originate from the Fairfield area as officials grapple to contain the outbreak in Sydney’s west. 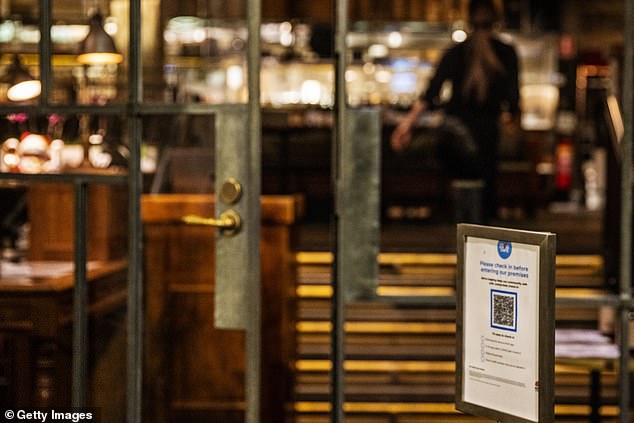 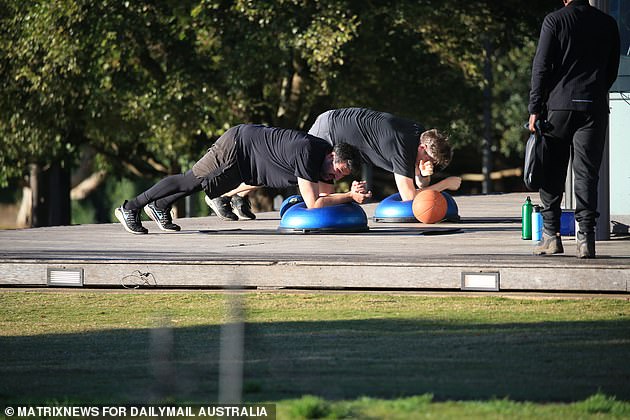 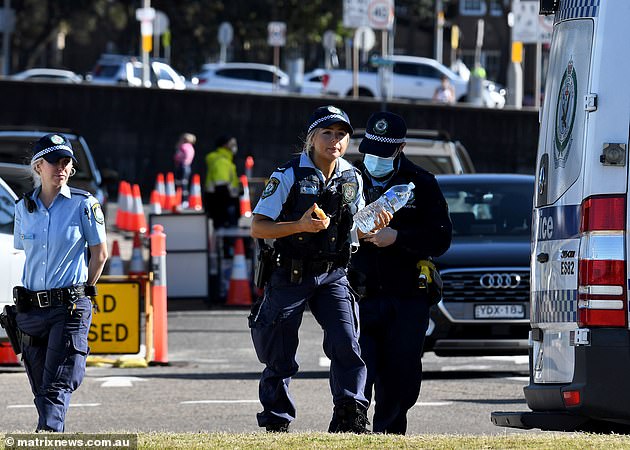 The crackdown comes as more Covid venue alerts were revealed with busy bus routes in the city’s southwest, a popular Kmart, and numerous supermarkets added to the list.

Passengers on some bus routes running to and from Bankstown have also been exposed to the virus and are urged to immediately get tested and isolate.

The construction site of a new multi-million dollar aged care complex at Gordon in Sydney’s north has also been listed as a close contact exposure site.

The Grindley Constructions site on Bushlands Avenue was visited by a confirmed Covid case from 7am to 1.30pm on July 12.

Four Woolworths, three Aldis and several pharmacies scattered throughout the city have all become places of casual contacts.

Wollongong Hospital staff were earlier on Friday evening told they must immediately get tested for Covid and isolate if they visited a nearby 7-Eleven store.

The central west of NSW is also on high alert after a person with Covid visited the rural town of Molong – about 290km west of Sydney – on July 16.

The Western District Health Service said contacts of the visitor to the town of about 1,800 residents have been tested and are in isolation.

NEW The following bus routes to and from Bankstown have been listed as casual contact exposure sites:

M91 Bus From Stacey Street at Marcella Street, to Restwell Street after Macauley Avenue Monday 12 July Departed 7.19am – arrived 7.21am 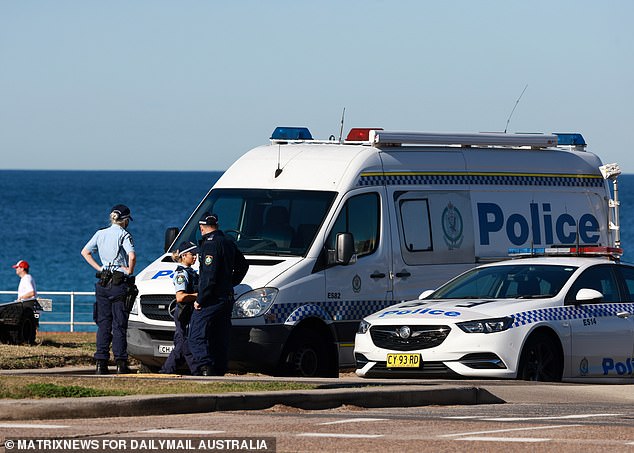 The harsh new measures could be applied to hotspots like the Fairfield local government area, where the virus is spreading rapidly. Pictured: police on patrol during Sydney’s lockdown 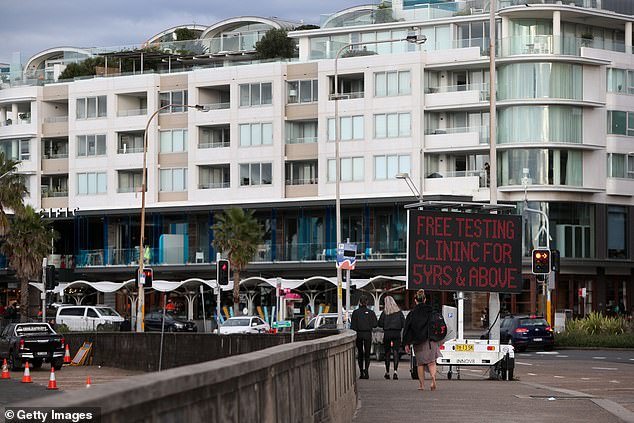 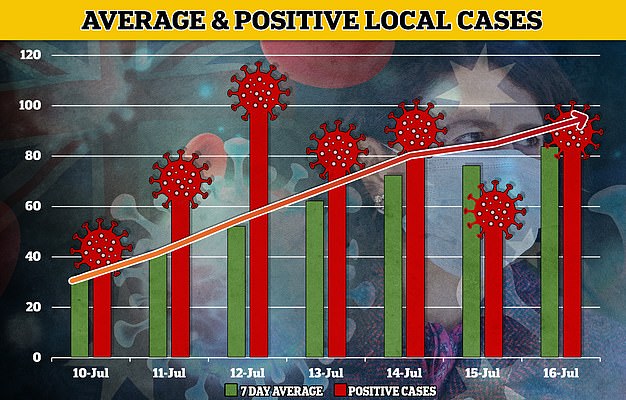 Sydney’s outbreak of the Delta Covid strain is not yet under control despite three
weeks of lockdown and cases dipping under 100 four days in a row.

Covid cases in Greater Sydney broke the 1000-case barrier as a further 97 were announced on Friday with 29 in the community for their entire infectious period.

Ms Berejiklian said that critical second number needs to be as close to zero as possible in order for the lockdown to end.

‘I can’t stress to the community enough my absolute concern that we need to work harder at reducing mobility and reduce our interactions with others if we will bring the situation under control,’ Premier Gladys Berejiklian said on Friday. 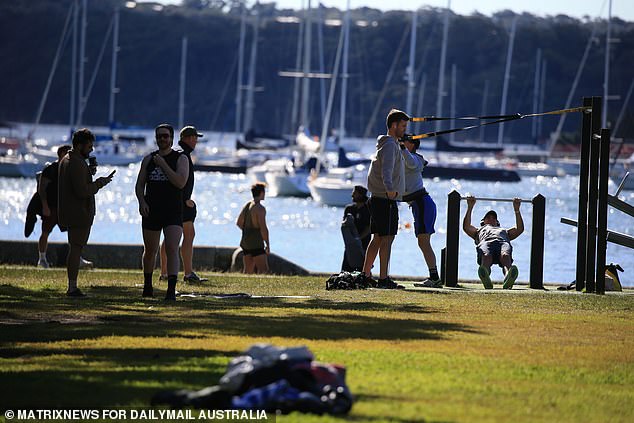 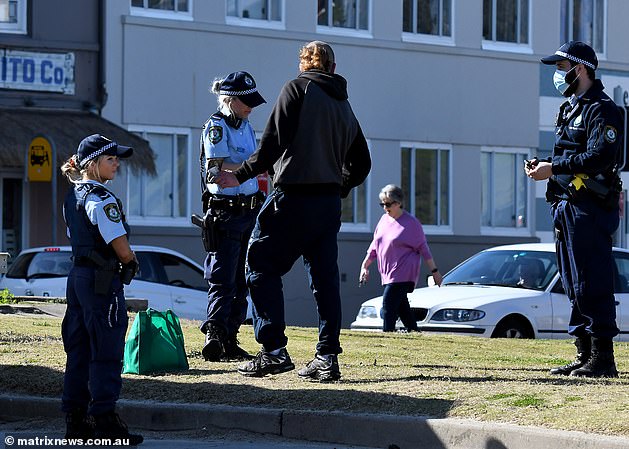 Ms Berejiklian has repeatedly said numbers will continue to ‘bounce around’ as contact tracers work to stay on top of the virus’ spread.

However, she said she would use tougher restrictions should the case rate continue to remain stubbornly high.

‘If (Chief Health Officer) Kerry Chant says we need to introduce to reduce mobility that is what we will do,’ she said. 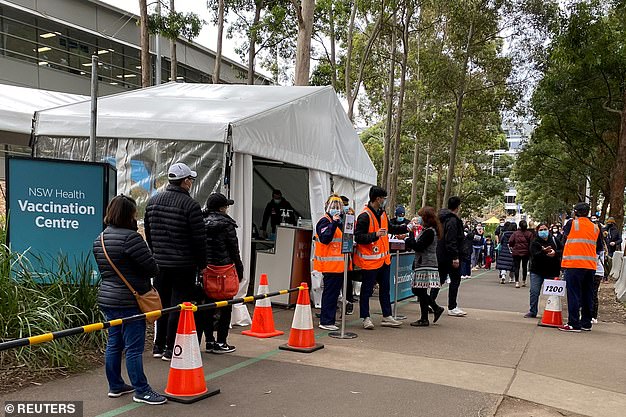 The key to ending lockdown is still vaccination. Pictured: A vaccination centre at Sydney’s Olympic Park

It’s unlikely Ms Berejiklian and Dr Chant will consider easing Sydney’s lockdown until the figures stabilise and drop amid concerns that contact tracers still aren’t on top of the outbreak.

Sydney has been in lockdown for three weeks and the premier has already announced a two-week extension – but there are fears stay-at-home orders will remain in place well beyond the expected date.

The vast majority of cases on Friday were in the Fairfield council area, in the city’s south west.

But in just six days, that number has more than doubled to 83.8 new cases by Friday. Average cases appear to be trending up by about 10 each day.

Dr Chant said on Friday she  ‘was not pleased’ that transmission of the virus ‘appears to be ongoing’.

‘We need to disrupt the cycle, our mobility and other interactions,’ she said. 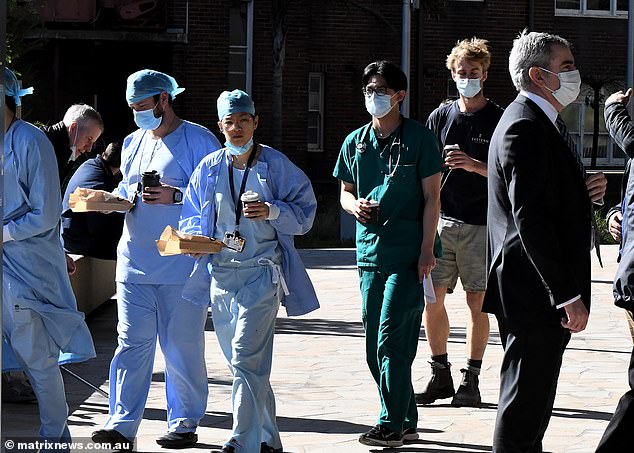 The vast majority of cases on Friday were in the Fairfield council area, in the city’s south west 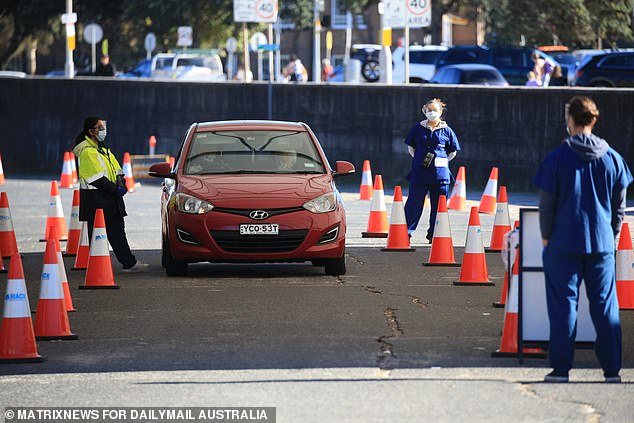 The Delta variant of the virus shows no signs of slowing in Sydney and case numbers will continue to rise for at least a few days, according to experts

Prof McBryde said the Delta variant of the virus is showing no signs of abating in Sydney and case numbers will continue to rise for at least a few days.

‘Probably four weeks from now, would be a minimum (about August 9),’ she said. Even then, the restrictions will ease only slowly. 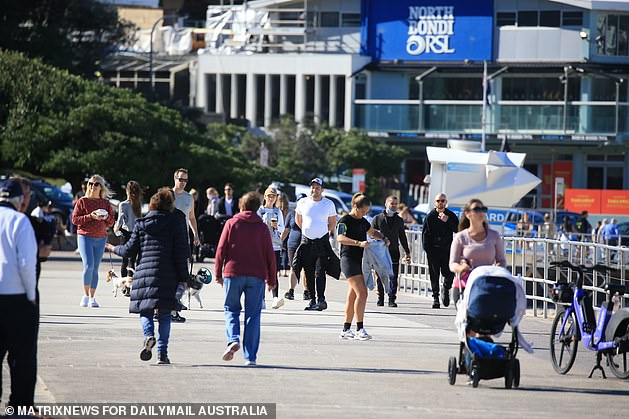 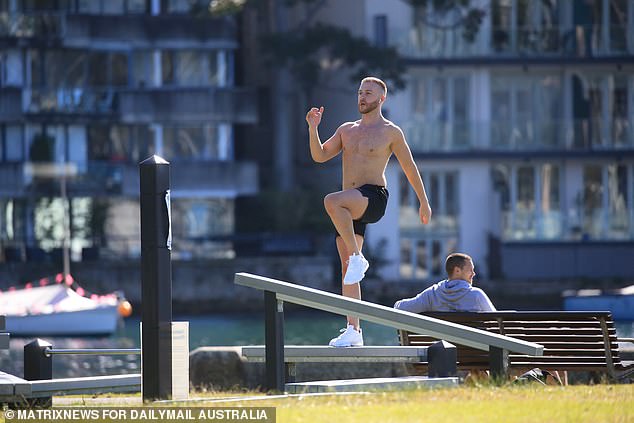 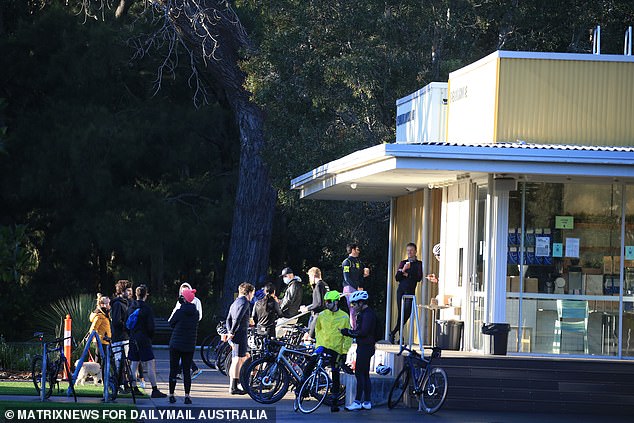 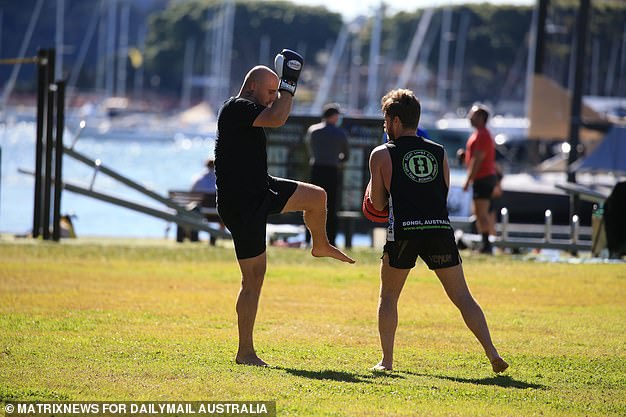 Sydneysiders are allowed to travel up to 10km for essential exercise