Researchers have created a robot that can slither like a snake – and it might be used in laparoscopic surgeries.

The invention is the latest in a slew of new robotic developments.

Engineers have recently come up with robots that can glide across water, open doors and lift up to 1,000 times their weight.

Now, scientists from Harvard have created one that can slither using artificial scales, according to new research published in Science Robotics.

Researchers designed the ‘robot snake’ by using a type of paper cutting art, called kirigami, to engineer the device.

Kirigami is a variation of origami that relies on cuts instead of folds.

The Harvard team thinks the ‘snake’ could be used during search and rescue missions, Newsweek reported.

Additionally, the researchers say it could be used in keyhole surgeries.

It is comprised of an elastic tube that repeatedly swells and then becomes smaller.

Plastic scales that are sliced onto the robot allow it to have a 3D, adaptable surface.

The scales replicate snakeskin, which allows snakes to move themselves forward. 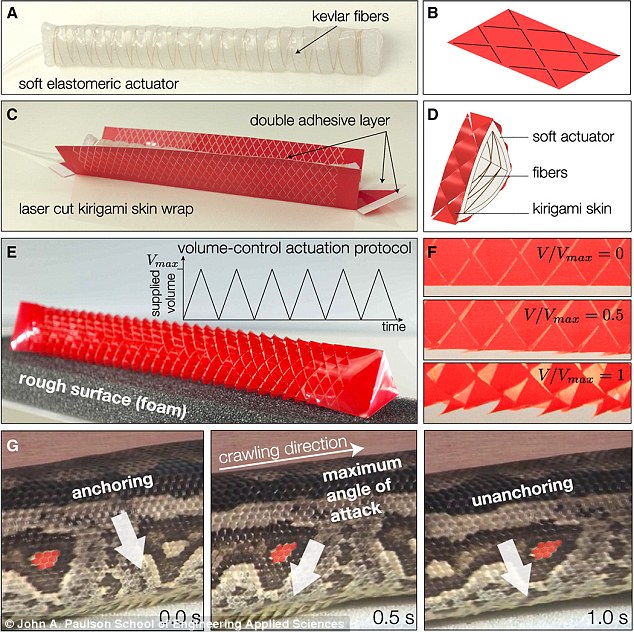 Lasers slice small cuts in a plastic sheet that the engineers wrap around the robot’s elastic tube.

As the tube expands the robot’s scales move away from it and grip the surface of the ground – just like snakeskin.

Different cuts can result in differing slither styles. A pattern within the plastic that consists of trapezoids will allow the robot to take longer strides.

Researcher Ahmad Rafsanjani said: ‘We show that the locomotive properties of these kirigami-skins can be harnessed by properly balancing the cut geometry and the actuation protocol.’

WHAT IS LAPAROSCOPIC SURGERY?

Scientists at Harvard have engineered a robot that can slither like a snake.

They believe that their creation might soon be used in laparoscopic surgeries.

Laparoscopy is a surgical form that requires only small cuts.

The type of surgery was named for a tool called a laparoscope, which is a thin surgical tool that has a small video camera on its tip.

Surgeons insert laparoscopes through minuscule cuts and have the ability to monitor patients’ insides via video camera.

There are numerous benefits associated with laparoscopic surgery.

Additionally, they don’t have to stay in the hospital as long.

Their scars cause less pain, and they heal quicker.

The Harvard team thinks their snake robot can be used for medical purposes in the future.

Researcher Katia Bertoldi explained: ‘We believe that our kirigami-based strategy opens avenues for the design of a new class of soft crawlers.

‘These all-terrain soft robots could one day travel across difficult environments for exploration, inspection, monitoring and search and rescue missions or perform complex, laparoscopic medical procedures.’