Cruise ships carrying an estimated 20,000 passengers were stranded in the Gulf of Mexico on Saturday as Hurricane Harvey left the Port of Galveston closed.

Carnival said that three of its ships were unable to return Galveston as scheduled and that two of them would be forced to divert instead to New Orleans, where they would resupply.

The cruise line said passengers could get off the two diverted ships, the Freedom and the Valor, in New Orleans, but advised against that in a statement posted on its Facebook page.

‘Given the severity and projected path of the storm along with potential challenges guests may encounter attempting to travel back to Galveston independently, we are strongly encouraging them to remain on board as we intend to return the ships to Galveston as soon as feasible,’ Carnival said .

The Carnival Breeze (pictured in a file photo) is extending its stay in Cozumel, while two other Carnival ships are diverting to the Port of New Orleans

A third ship, the Carnival Breeze, will extend its stay in Cozumel, Mexico, and begin sailing back to Galveston this weekend, the company said.

The next scheduled cruises on all three ships will be shortened and customers will receive refunds, the company said.

‘We will continue to remain in close contact with port officials regarding their plans to re-open once the storm has passed,’ spokeswoman Christine de la Huerta said.

Meanwhile, Royal Caribbean International said that its Liberty of the Seas cruise ship had departed Cozumel, Mexico on time on Friday and was still scheduled to return to Galveston on Sunday. 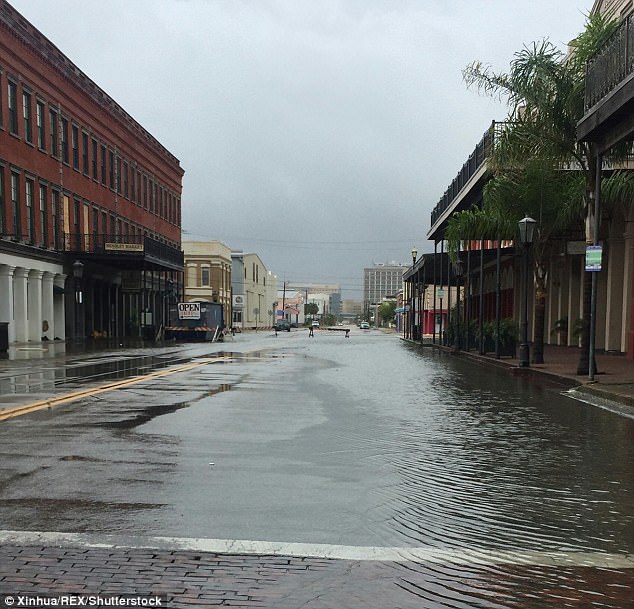 Floodwaters are seen in the streets of Galveston on Friday. The city’s port has shut down, stranding an estimated 20,000 cruise passengers in the Gulf of Mexico

‘However, we will return to Galveston only when it is safe to do so,’ Royal Caribbean spokesman Owen Torres said.

The port’s interim director, Peter Simons, told the Houston Chronicle newspaper that officials there were still trying to determine if ships could safely return on Sunday.

‘We’re working with the cruise lines, the Coast Guard and the pilots to see what can be done to bring the cruise ships in as quickly but as safely as possible,’ Simons told the paper.

Galveston is a major cruise embarkation port, with an estimated 1.73million passengers annually.