Has your company pension lost a fifth of its value this year?

More than 20 million savers who have money in company pension default funds face huge differences in returns this year that could cost them thousands of pounds in retirement.

Unless workers actively choose funds to invest in, they are automatically shoe-horned into a one-size-fits-all pension. This is chosen by their employer.

The eight biggest default funds have all lost value this year as a result of violent swings in markets, caused by a toxic mix of rising interest rates, political uncertainty, soaring inflation and the global knock-on effects of the war in Ukraine.

Luck of the draw: Unless workers actively choose funds to invest in, they are automatically shoe-horned into a one-size-fits-all pension. This is chosen by their employer

But a Money Mail investigation has revealed a gulf in returns from the best and worst-performing funds, which could create a lasting pensions divide.

More than two million people whose employer uses the default fund from Now: Pensions, the third-largest provider in Britain, have been the biggest losers.

Their pension lost 19.2 per cent in the 12 months to September, after fees, meaning nearly a fifth of its value has been wiped.

This means that two workers on the same salary could be £7,600 better or worse off over the past year, depending on their employer’s choice of pension.

Laith Khalaf, of stockbroker AJ Bell, says it is a ‘shocking’ gap that most people would be unaware of. ‘Pension default funds are simply the least worst option.

‘The wide range of performance among these funds shows there is no consensus on what a default fund should look like,’ he says.

How even small differences can mount up

Even small changes in returns can either add or knock off decades from the lifespan of a pension pot.

A difference in annual returns of just 2 percentage points can amount to £185,890 for an average earner by retirement age, calculations by AJ Bell show, based on someone on the average wage who starts saving into a pension aged 22 and contributes the minimum 8 per cent of their salary a year.

Since 2012, workers have been automatically enrolled into workplace ‘defined contribution’ pensions, which are like a pot of cash you and your employer pay into every year and to which you gain access from the age of 55.

This money is invested in a mix of assets, such as stocks and shares, government bonds and company-issued bonds. But pension firms have a lot of freedom when it comes to investment strategies. 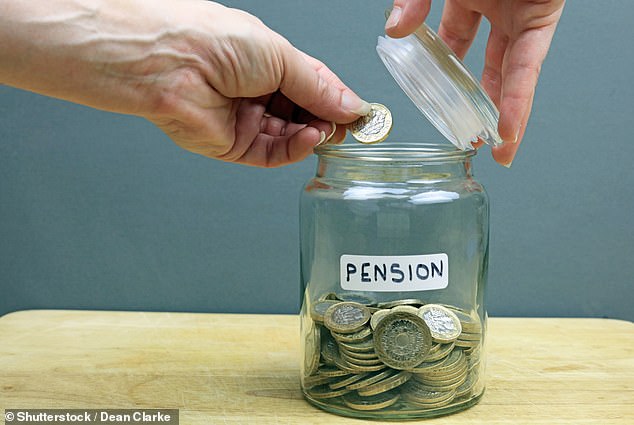 Emma Matthews, of Now: Pensions, says: ‘Investments go up and down, so every saver should be prepared to see fluctuation in the value of their pot. Our default fund has recovered from the wider market turmoil.’

A spokesman for People’s Partnership, provider of The People’s Pension, says: ‘These September figures reflect the very poor market conditions which impacted every retirement saver in some way.

‘Since then, there has been a recovery in the markets and our investment performance has improved significantly.’

Scottish Widows says: ‘There will always be volatility, which causes markets to fall. But our experience shows us that it usually recovers in the long run.’

Cautious funds that took a hit

The most cautious funds, which invest with less risk, have fared the worst on average. This is because they tend to invest more heavily in bonds, which have been hammered. Interest rates rises have pushed up bond yields, prompting a fall in bond prices.

This means those nearing retirement have lost the most.

Around 850,000 workers have lost an average 32 per cent this year in so-called ‘lifestyling’ bond funds that reduce the threat of a stock-market shock as they approach retirement, says Mr Khalaf.

The funds, which typically deliver lower returns, are a throwback to when most savers bought an annuity to turn their retirement pot into an income for life.

More than £4.5 billion has been wiped from the value of older workers’ pensions as an estimated £15 billion in workplace pensions was invested in these funds last November, according to A.J. Bell.

Savers who took out workplace pensions in the 1990s and 2000s, and those who paid into individual stakeholder plans in the 2000s, will have their money moved to lifestyling funds, typically five years before retirement age.

What to do if your pension has dropped

So if your pension plummeted this year, what should you do?

Dan Mikulskis, of pension consultancy LCP, says even the best investment strategies lose money over short periods, so don’t make any knee-jerk reactions. Savers who sell after a sharp fall risk missing out on a rebound.

The good news is that in almost all schemes, you can invest outside the default fund, in a fund that is more appropriate to you.

Steven Cameron, of pension provider Aegon, says you can ask your employer, scheme trustees or provider for information on where you are currently invested and what other options you have. This information should also be available on your online pension account.

But be mindful of fees charged by other funds. Default funds cannot charge more than 0.75 per cent but others may charge more.

Mr Mikulskis says: ‘Choose a fund that’s right for you and stick with it — all funds go through periods of bad performance.’