Hatton Garden’s mystery thief ‘Basil’ is ‘back in the UK’

The Hatton Garden ‘one who got away’ has returned to London and has police on his tail, it was claimed today.

Five of the gang of veteran criminals who carried out the now-infamous £14million raid on London’s jewellery district in 2015 were jailed, and another got a suspended sentence.

But a mystery seventh member of the group, referred to by police only as ‘Basil’, was never caught and is thought to have fled abroad after the heist.

A source close to the Scotland Yard probe into the break-in has now claimed Basil is back in Britain and the net could be closing in on him.

One of the few CCTV shots of ‘Basil’, the member of the Hatton Garden heist gang who got away after the raid, but is now said to be back in Britain

Basil helped the gang gain entrance to Hatton Garden Safe Deposit, where London’s jewellers kept their stock and was said to have known the building ‘like the back of his hand’.

CCTV images from inside the building showed Basil with a face-mask, a large hat and apparent ginger hair, although this was thought to be a disguise.

One of the gang, Danny Jones, later claimed he was a ex-policeman who later worked in security. He said Basil was an ‘eccentric’ who spent years planning the raid.

It was unknown how much of the loot he got away with – but it was claimed after the raid that he may have been a wanted man not just with police but also other criminals who he was said to have ‘double-crossed’.

Called ‘the Ghost’ due to the lack of clues over his identity, he was said to have fled to Panama. But it is now claimed he is back in London.

The source told the Daily Mirror: ‘Officers have known who Basil is for a while and were anticipating an arrest but it came to nothing.’ 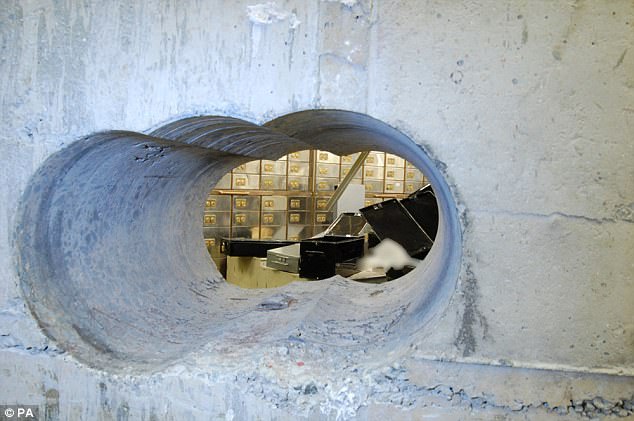 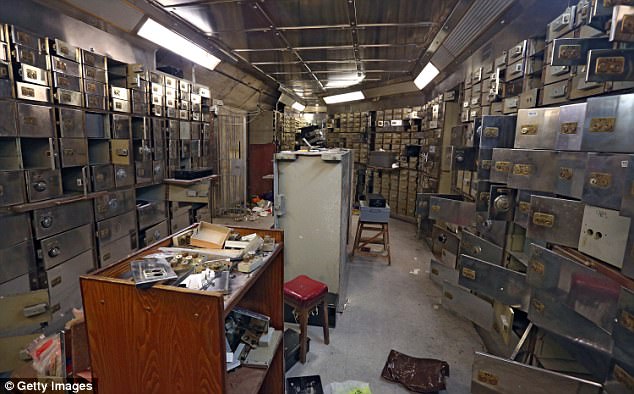 Scotland Yard said it would not provide a ‘running commentary’ on the investigation, suggesting they may still be gathering evidence before making a move.

During the Easter Bank Holiday raid, Basil managed to open the front door to the Safety Deposit firm, and then the fire exit to let the gang in from the street.

He then marshalled the two days in which the gang drilled a hole through a concrete wall into a safe raid.

Speaking before the gang were jailed, Detective Superintendent Craig Turner, from the Met’s Flying Squad, said: ”The individual known as ‘Basil’ remains unknown. It is believed ‘Basil’ let the group in and possibly disarmed the alarm.

‘Basil is still wanted in connection with the burglary. We would ask anyone who has information as to the identity of ‘Basil’ or the whereabouts of the outstanding jewellery to contact police.’

Brian Reader, 78, dubbed the ‘Guv’nor’, was among those caught by police investigating the raid.

He was later jailed for six years and three months after pleading guilty to conspiracy to commit burglary and has been in the healthcare wing at HMP Belmarsh for the last year.

His accomplices John Collins, 77, Daniel Jones, 63, Terry Perkins, 69, and William Lincoln, 62, all got seven years for the same charge. 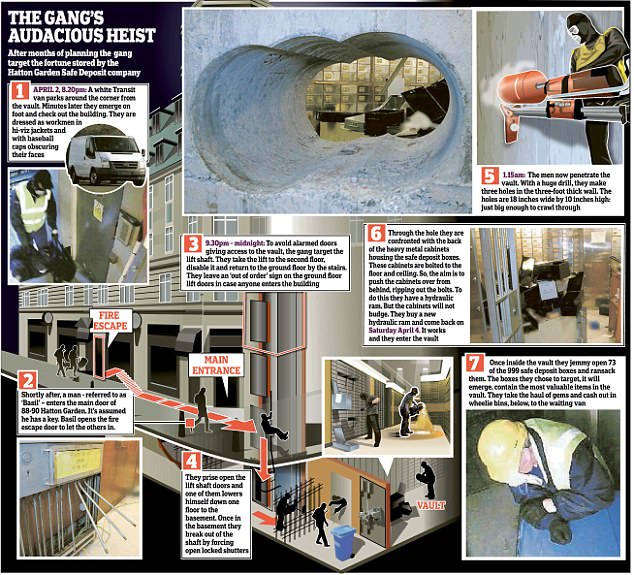