This is the spooky moment a dog walker saw a ‘demonic figure’ crawling across the path of a country park ‘haunted by a spirit called Greg Lady’.

Hannah and Dave Rowett were walking their labradors through the supposedly haunted forest in Clumber Park, Nottinghamshire, at around 6:30am earlier this month when Mrs Rowett ‘felt they weren’t alone’.

The 52-year-old claimed she quickly pulled out her phone and captured a ‘scary’ white silhouette crossing the path in front of her as she followed it with a torch.

On watching it back she turned to Mr Rowett, 52, and said: ‘I’ve just seen a ghost.’

One of the National Trust’s most visited country parks, Clumber Park is claimed to be haunted by a female spirit called ‘Grey Lady’ who has reportedly been seen wearing a long grey cloak.

She has since been described as a ‘demonic figure crawling on its ”long limbs”’ – desperate to show her ‘evidence’ with the world.

Paranormal sceptic Mr Rowett admitted his hairs ‘stood up on end’ when he saw it and that Greg Lady has convinced him to believe in ghosts.

Hannah and Dave Rowett, pictured, were walking their dogs through the supposedly haunted forest in Clumber Park, Nottinghamshire, at around 6:30am earlier this month when Mrs Rowett ‘felt they weren’t alone’

The clip was originally a ‘live’ photo, where successive frames are joined to make a short video, but Mrs Rowett said she had it converted so she could share it on Facebook.

The video has now racked up more than 500 reactions and almost 2,000 comments, with spooked-out users labelling it ‘scary’ and one even joking he is glad the park’s campsites are always booked up.

Mrs Rowett, who said ‘she has always sensed things’, claimed she has ‘no logical explanation’ for the experience as the pub and restaurant owners do not smoke or vape. 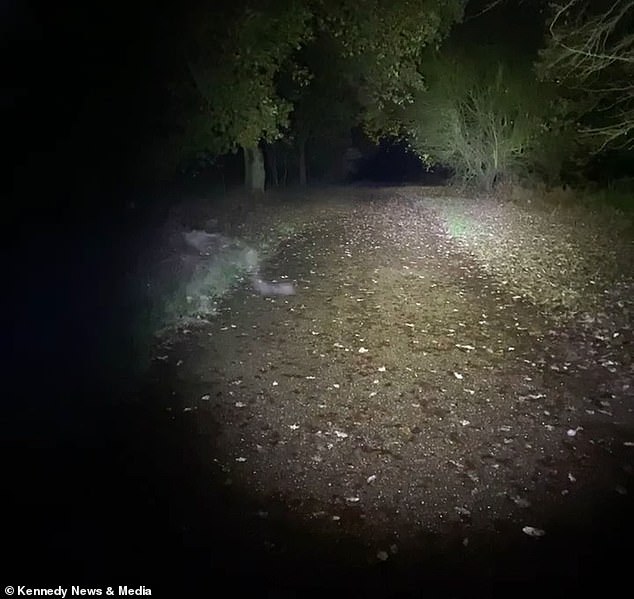 Mrs Rowett, from Worksop, Nottinghamshire, said: ‘Initially I thought it was a dog, but then as I look at it it’s more a human-type form.

‘Dave was still getting one of the dogs out of the car and I just sensed I wasn’t on my own. I took a photo and as I did it went across the camera.

‘It’s quite demonic in the way it’s crawling and has long limbs. It never changes its form and if it was smoke it would change.

‘I followed it with my torch, watched it back, then turned to Dave and said ”I’ve just seen a ghost and I’ve got it on camera”. I didn’t feel scared.

‘When I sense things I always get my camera out because you don’t always see things with the naked eye. That’s why I caught it.’

Mrs Rowett added: ‘I think it’s such an incredible image that I wanted to share it. The kids were blown away by it when we sent it to them.

‘I’ve had so many messages about it. It justifies our feelings about it. There aren’t many like this out there and we’ve got no logical explanation.’ 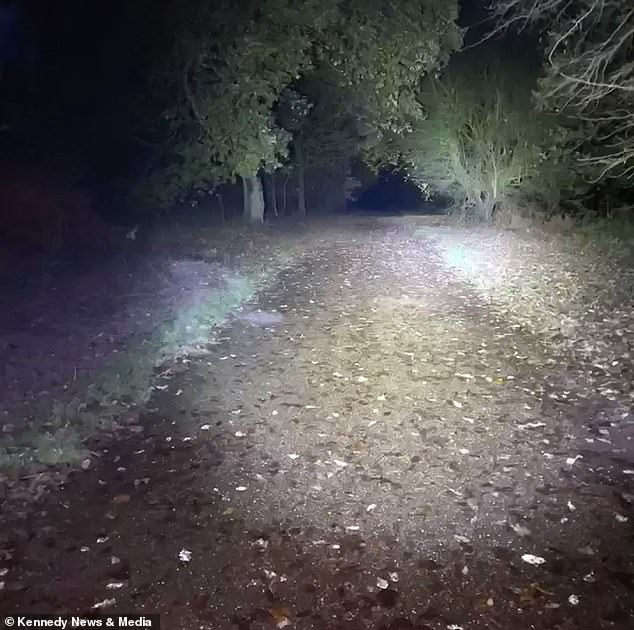 Mrs Rowett, who said ‘she has always sensed things’, claimed she has ‘no logical explanation’ for the experience as the pub and restaurant owners do not smoke or vape

The mother, who runs The White Lion pub and restaurant in Worksop with her husband, said she grew up in a house where she would ‘regularly’ see an old man who supposedly haunted it.

Meanwhile, Mr Rowett described himself as a ‘paranormal sceptic’ before seeing his wife’s footage but admitted it changed his mind and gave him the evidence he needed to believe in ghosts.

‘I’ve always been really sceptical but literally every hair from my feet to my head stood on end. I asked her to show me again. I loved it,’ he said.

‘I wasn’t scared. I was just glad to see something because I’ve always said that I’d need to before I believe stuff like that. This makes me believe there is something.’

Facebook users have tried to claim the ‘figure’ is cigarette smoke or e-cigarette vapour, but the pair insisted they don’t smoke or vape.

They sent the photo to their children who turned it into a video file for Mrs Rowett to post on Facebook.

Her post, captioned ‘it seems we weren’t alone on our early morning walk in Clumber today’, has earned almost 3,000 shares.

One person commented: ‘The image is too far away to be smoke or breath. Looks cosha to me. Scary.’

Another joked: ‘I’m glad Clumber is always fully booked for camping now, after seeing this.’

However, one sceptic said: ‘It’s just smoke I think.’

A second said: ‘It’s cold. Someone’s probably breathed in and let out some steam.’

The pub bosses, who walk their dogs every day in Clumber Park, said they will be keeping their eyes open for spooky happenings in future.