Have Conte’s Chelsea got enough for a top four place?

‘There is this risk,’ Antonio Conte says, ‘to stay out of the Champions League’. It is an idea Chelsea would hope not to entertain – but now have to face up to.

Behind Liverpool and Tottenham, outside the top four, Chelsea must get the Premier League run-in right if they are to stay among the European elite next season.

‘This could be a possibility, for sure,’ Conte added. ‘I am repeating the same concept many times but in this league to find a place in Champions League is not simple. We must be ready to fight, to be concentrated and to understand that this target is an important target for us but it won’t be easy.’

Chelsea face Liverpool and Spurs, their most realistic rivals for a place in the top four, in a run-in that starts away at Manchester City on Sunday.

But do the Premier League champions have enough in the tank to avoid being unceremoniously dumped from English football’s premier places?

Sportsmail looks at the questions facing Conte ahead of Chelsea’s last 10 games.

*April and May TV fixtures TBD

Can they make the top four?

Chelsea will be desperate to take a place in the Champions League again next year after missing out for the 2016-17 campaign.

A place in the top four remains a minimum expectation of Conte and his squad this season.

Sat on 53 points with 10 games to go, Chelsea need to be targeting a final total of around the 76-point mark. No team has ever achieved that and finished outside of the top four.

To make up that 23-point gap, they can only afford to drop seven points from a run-in that includes games against rivals Manchester City, Tottenham and Liverpool.

But the bigger focus will be Conte to get his team taking maximum points from the smaller clubs in the Premier League, something Chelsea have suffered hiccups with this season.

Trips to the likes of Burnley and Newcastle United, on the final day, could end up deciding their fate. Those home games against Tottenham and Liverpool – their realistic rivals in the chase of the top four, could also prove pivotal. 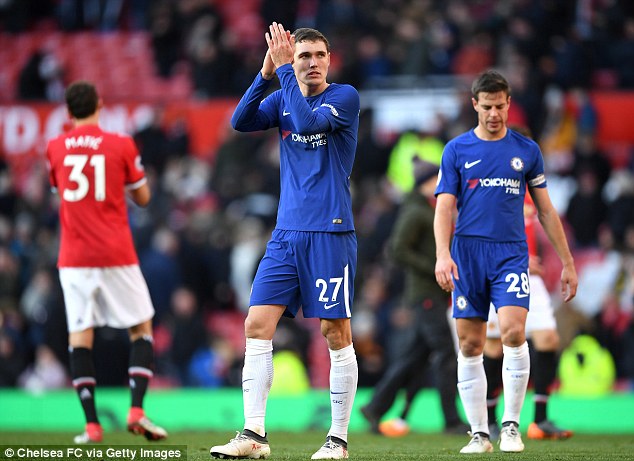 Will the rest of the ‘Big Five’ dip?

Chelsea have been producing bottom-half-of-the-table form since the start of 2018 – and the improvements of both Spurs and Liverpool are really troubling them.

Those two sides have taken 18 and 16 points respectively, since the turn of the year, with Chelsea managing just eight.

Under Mauricio Pochettino, Tottenham have shown an ability to go long stretches without losing, improving in the second half of the season.

Chelsea may need to beat Spurs at Stamford Bridge on April 1 to rein in Pochettino’s men in the fight for the top four.

Liverpool will perhaps be the bigger target for Conte. They have shown a tendency to dip towards the end of a campaign when Jurgen Klopp’s demands take their toll on the players.

Last year Liverpool struggled in January but back then he maintained: ‘It’s not a fitness problem,’ addinjg: ‘Football is about decision-making — you have to make the right decisions at the right moment.’

The trouble for Conte is Klopp has made strides forward with his rotation policy this season and there were no signs of Liverpool flagging against West Ham on Saturday. 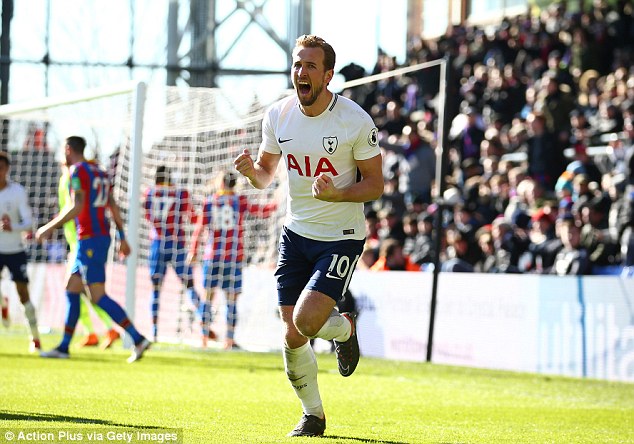 Can Conte find a striker solution?

Sunday at Old Trafford proved to be another afternoon to forget for Alvaro Morata — a crossbar and a controversial offside call away from scoring in either half in an otherwise meek display.

It is now over two months since the former Real Madrid man scored for Chelsea and, at £70.6million, his summer purchase coupled with Diego Costa’s exit to Atletico Madrid is not looking too wise.

Morata lost 14 of his 18 duels for the ball against United, struggling to hold the ball up and rarely providing a platform for other forwards to provide support around him. 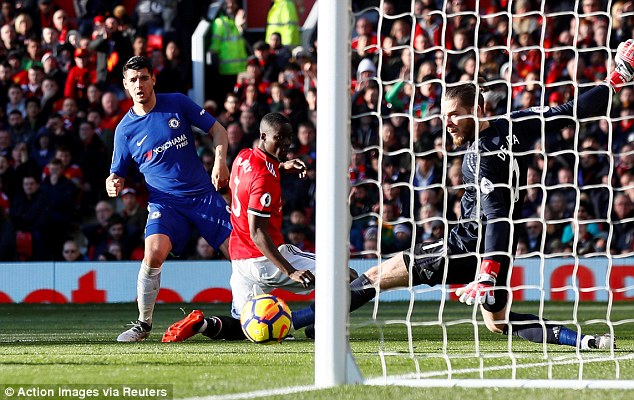 Bayern Munich defender Joshua Kimmich picked out Morata as his toughest opponent, speaking this week. ‘It was very tough to play against him because he has a very strong body, he is very fast and has a good technique,’ the German said.

But Morata has shown little of the sort in recent weeks.

So does Conte stick by his record signing, or look elsewhere? Eden Hazard produced a decent showing as a ‘false 9’ against Barcelona in midweek but his talents are better utilised deeper.

Olivier Giroud looks more of a danger when he leads the line for Chelsea but the ex-Arsenal forward does not have the same mobility that Conte calls for in big games.

Conte must find a way for Morata to return to his early-season form if Chelsea are to recover in the chase of the top four. 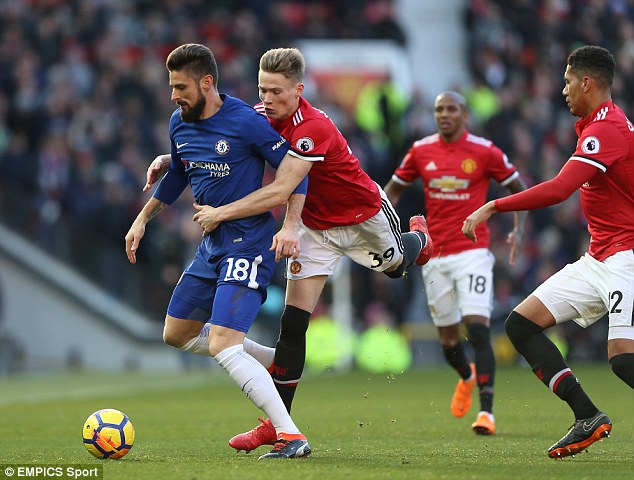 Can he get the best out of Hazard?

Conte’s decision to substitute Hazard at Old Trafford drew raised eyebrows, with the Italian saying afterwards: ‘It was a tactical decision. His energy finished.’

That call, with the game still up for grabs 73 minutes in, is worrying for Chelsea.

Hazard remains their key man, offering a rare sprinkling of star quality. Against Barcelona, he was shackled by having to play in a No 9 role. Here, he was selected as the first man to be substituted. 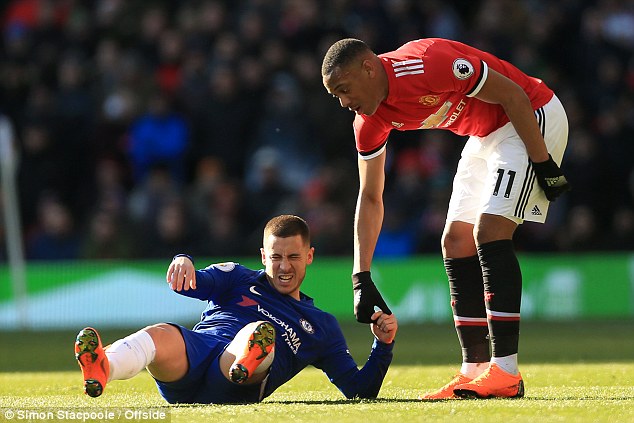 If the Belgian plays well, Chelsea undoubtedly have the quality to finish in the Premier League’s top four. Coupled with the upturn in form of Willian, Hazard can fire them there.

But that isn’t happening right now. Hazard’s goals have only led to two Chelsea wins in 2018. Whether a week off before Conte leads his men to Manchester City on Sunday if enough remains to be seen. 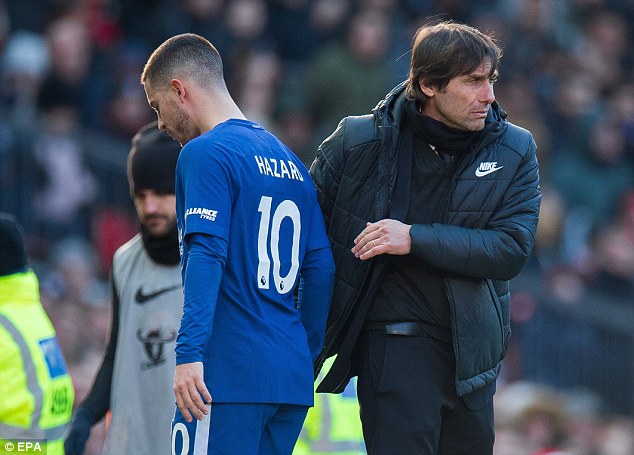