Health inspector lists the four red flags she notices at restaurants: How do you know a cafe is safe

Health inspector lists the four red flags she notices at restaurants: ‘I’ve seen it all, here’s what you need to know’

A health inspector who claims to have seen ‘a lot’ has revealed the four red flags which will put her off having a meal at any restaurant.

Posting to TikTok, the US-based inspector known online as ‘too far North’ said while her list may seem harsh ‘plenty of restaurants meet the requirements’ and dropping your standards should never be an option.

The first major red flag is a buffet, especially if it is self-service.

Buffets are the perfect environment for bacteria to grow and spread, she explained. 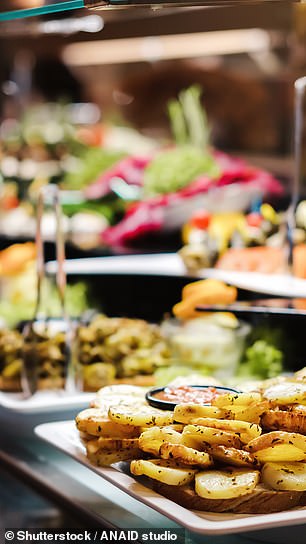 Others added that buffet guests are the problem, with many lacking basic hygiene including good handwashing practices.

But some people were quick to defend their love of al-you-can eat spreads.

‘I believe that buffets are like a training course for my gut resilience,’ one man wrote.

She then shared a picture of a filthy bathroom with crunched up toilet paper over the floor and an overflowing bin.

‘Places with dirty bathrooms,’ she wrote alongside the picture before explaining that she always checks the loos before sitting down for a meal.

And people quickly agreed with the point with one woman adding: ‘A dirty bathroom indicates a dirty kitchen.’

‘My dad used to check the bathrooms every time we went somewhere before deciding if we would stay to eat. I had no idea why as a kid but it makes so much sense as an adult,’ one man said. 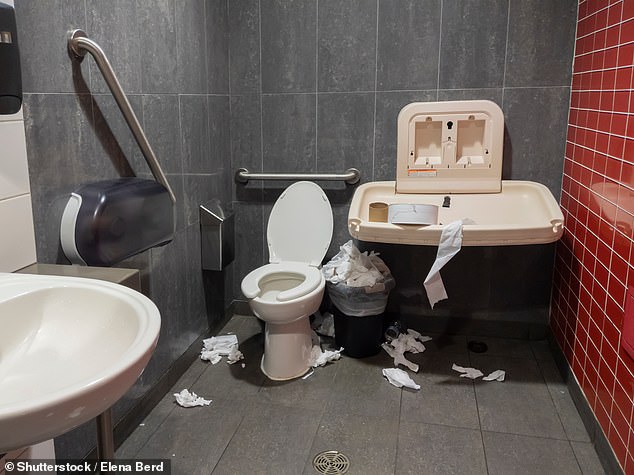 The third red flag for the inspector is a huge menu, which she said means the restaurant likely uses cheap, frozen food.

The young woman showed a double sided multi-sheet menu off, careful to point out the small font and narrow columns which indicated the kitchen was producing too many different meals.

This red flag caused a debate among her followers.

‘A big menu is such a turn off, how can a kitchen prepare so much food and keep it fresh,’ one man said.

With another agreeing: ‘There goes the Cheesecake Factory, their menu is a novel.’

But a kitchen hand stood up for the popular chain. 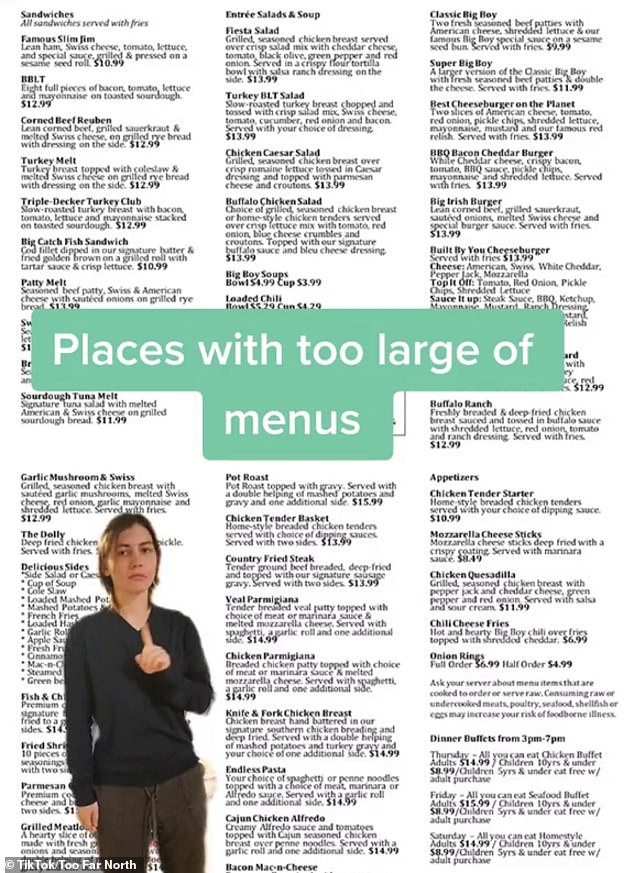 The fourth came down to the staff – if they don’t look happy to be there then you shouldn’t eat there.

Which is your restaurant red flag?

‘I love to see places where staff are happy. breaks my heart when I see an abusive owner,’ she said.

A bartender of eight years strongly agreed with the final red flag and said  good management make for a good restaurant.

Her followers didn’t hesitate to add their own restaurant red flags to the list.

‘I always look at the windows, if they are dirty then that’s a good sign too,’ one man said.

Others said they prefer to eat at home because it is ‘cheap and safe’.

And a kitchen hand agreed it can be hard to recognise a disgusting restaurant.

‘Or my upscale seafood restaurant where our chef told us to cut around the rat teeth marks in the desserts. nowhere is safe,’ they said.

The video quickly went viral and has been seen by over a million people.