Health inspectors have been forced to take ‘urgent action to protect people’ at a beleaguered hospital trust.

The trust is currently the subject of a major review, amid fears 100 mothers and babies died needlessly.

This is despite repeated claims from senior executives at the trust that the maternity services were ‘safe’, ‘caring’ and had made substantial improvements.

The CQC is currently taking enforcement action against the trust’s maternity services and its two A&E units after uncovering serious failings at an inspection in August.

This means managers are required to provide regular updates to the watchdog outlining what they are doing to improve care and ensure patients are safe.

If the CQC is not satisfied by these updates, it has the power to close or suspend departments, although this is extremely rare.

The watchdog issued a briefing document explaining the actions it was taking against the trust.

The full details of the poor care uncovered by its inspectors will be published in a lengthy report next month.

The briefing note said problems had been identified with midwives’ monitoring of babies before they were born and the treatment of sepsis patients in A&E.

Professor Ted Baker, chief inspector of hospitals at the CQC, said: ‘We remain very concerned about the emergency department and maternity services at Shrewsbury and Telford Hospital NHS Trust as a result of our inspections.

‘This is why we have imposed urgent conditions on the trust’s registration to safeguard patients.

Maternity staff wouldn’t listen to us

But in the delivery suite four days later, doctors told her that daughter Quinn had no heartbeat.

Mrs Cadwallader, 25, said that before going into labour she told hospital staff that the baby’s movement had slowed down, but she was assured everything was normal. 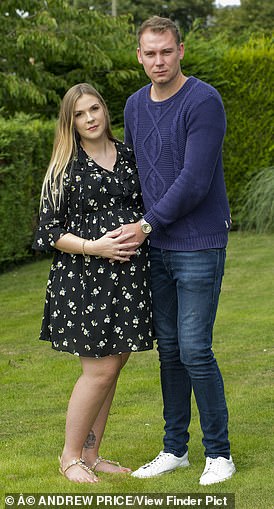 The findings of an internal review were inconclusive, and a post-mortem examination failed to find a cause of death.

Mrs Cadwallader and her husband Gavin, from Shrewsbury, believe their baby’s stillbirth last December was preventable. ‘If our concerns had been listened to, she could have survived,’ she said.

The hospital trust said it had asked the couple if they would allow their case to be referred to the independent review of its maternity services.

‘The conditions require the trust to report to CQC on a weekly basis detailing the action it is taking to ensure the safety of patients using its emergency and maternity services, through its systems and audits.

‘We are monitoring the trust extremely closely and continue to work with NHS Improvement to ensure patient safety improves.

‘We will return to check on whether sufficient improvements have been made and will take further action if needed.’

The trust’s maternity services are being investigated as part of a major review ordered by the former Health Secretary Jeremy Hunt.

When this was first launched last April it was investigating 23 incidents of poor care but this number has since risen to more than 100 spanning almost two decades.

Several families claim they were pressured into having natural births without caesareans or forceps which led to their babies being stillborn or suffering brain damage.

Others allege that midwives failed to spot infections or complications.

Around 5,000 women give birth within the trust’s maternity services every year which include a main hospital maternity department and five smaller midwife-led units.

Dr Edwin Borman, the trust’s medical director said: ‘We take the safety of our patients and their care very seriously. We are addressing all the areas raised by the CQC.’

Deirdre Fowler, the director of nursing, midwifery and quality said: ‘We meet national guidelines in our maternity unit and conduct twice daily consultant led ward rounds. We have now provided the CQC with the records that show this.

‘Midwives in Shropshire’s midwifery led units (MLUs) have in the past used CTG (cardiotocography) to monitor fetal movements and where there has been any cause for concern referred a mother to an obstetrician in the maternity unit in Princess Royal Hospital.’

‘In regards to the reviewing of CTG fetal monitoring by midwives in the MLUs, the trust has now changed its approach and all women are now monitored in PRH Obstetric Unit. It is very important that mothers who are concerned about their baby’s movements contact the trust or their midwife to be reviewed.’

A damning report published in July found the units to be severely understaffed with an average of five midwives off sick each day.

The Royal College of Obstetricians and Gynaecologists warned of a reluctance among managers to investigate errors or learn from their mistakes.

I was crying out for a caesarean

A baby was left with a huge bruise on his head after he became trapped in his mother’s pelvis at one of the scandal-hit maternity wards.

Amy Butler, 25, said a consultant used forceps to yank her son during her delivery in August 2016, leaving his head marked and swollen.

She also claimed midwives mistakenly left her fully dilated for five hours, leaving her baby at risk of serious brain damage and herself in agony.

Miss Butler begged medical staff for a C-section during her seven-hour ordeal at Princess Royal Hospital in Telford but was told a natural birth was best.

Miss Butler, from Telford, said: ‘I am absolutely disgusted. I was crying out for a C-section but the midwives told me I was perfectly fine to go into labour.

‘Bradley got stuck in the pelvis and suffered a terrible bruise. His swelling was so severe it came over his eyes. Thankfully, he didn’t suffer any major problems but it could have been worse.

‘The midwives didn’t realise I was fully dilated for five hours, which is dangerous. I’ve got a gut feeling that if I wasn’t left dilated for that long then Bradley wouldn’t have got stuck in the pelvis.

‘I thought nothing of it before I read other parents’ stories in the Daily Mail.

‘Bradley was very slow developing. He’s just turned two and he’s only been walking for a month-and-a-half. He couldn’t sit up until he was ten months old.’

A spokesman for the Shrewsbury and Telford Hospital NHS Trust said: ‘We have received no formal complaint in this matter. We would be happy to discuss this with Miss Butler.’