She battled killer malaria, contracted while covering the Olympic Games in Rio last year. And now Sky Sports star Charlie Webster has a warning message to Britons travelling to warmer climates this winter.

The 34-year-old, who nearly died last year after being infected with the mosquito-borne virus, is the face of a new campaign to encourage people to take malaria drugs – even if they’re heading to areas considered ‘low risk’.

Charlie admits she didn’t take medication, but launching the Off Somewhere campaign, she said: ‘Low risk doesn’t mean no risk. Antivirals are up to 90 per cent effective.’

A survey for Glenmore Pharmaceuticals, which has launched Maloff Protect, the first over-the-counter anti-malarial drug, found nearly half of Britons who travel to malarial regions are not aware of the risks or don’t bother taking medication.

Charlie suffers from PTSD and kidney problems after spending months in hospital and six days in a medically induced coma.

Simple pleasures such as toast for breakfast could soon be back on the menu for the thousands of British bowel-disease sufferers who have been told to steer clear of wheat.

Spanish scientists have developed a form of the grain that doesn’t contain gliadin – compounds in the wheat protein gluten that trigger allergies in the gut in people with coeliac disease, leading to digestive discomfort and more severe symptoms.

The genetically modified bread still contains wheat, so is said to be more enjoyable than gluten-free loaves. Trials are being carried out with coeliac-disease sufferers in Spain and Mexico. Sarah Sleet, from Coeliac UK, said: ‘People will be very happy with this.’

It’s perhaps the ultimate purchase for paranoid new parents: a portable air filter for your child’s buggy or car seat.

The air-cleaning cushion is designed to detect high levels of pollution and pump out clean, filtered air.

The cushion contains a sensor to detect airborne pollutants and a dual fan filter that reduces surrounding fumes by up to 80 per cent.

A bluetooth sensor works alongside a free app which maps location, sensing levels of harmful gases in the immediate area. At dangerous levels, the fan is triggered, delivering 1.5 litres of filtered air every ten seconds. 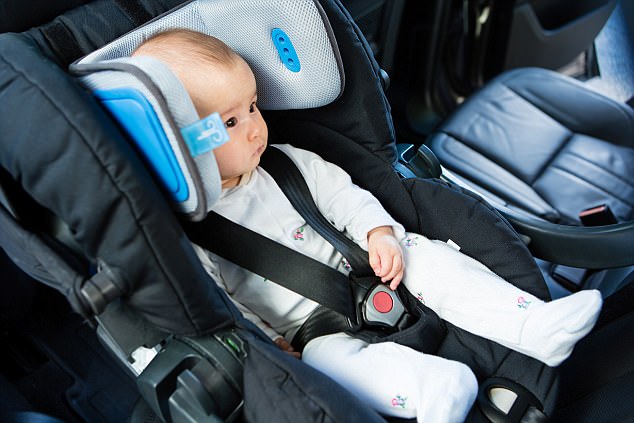 It’s perhaps the ultimate purchase for paranoid new parents: a portable air filter for your child’s buggy or car seat

‘Pushing my daughter’s pram through busy streets made me aware of how close she was to the epicentre of the fumes of a vehicle,’ says Mr Romano.

The device has been tested by the Global Centre for Clean Air Research at the University of Surrey and has produced promising results, with fumes in built-up areas such as London reduced by at least 49 per cent.

Anti-wrinkle jab Botox may be a new treatment to give men a boost in the bedroom. Research has revealed that a single jab of the toxin can be highly effective for sufferers of erectile dysfunction (ED) – thought to affect up to 40 per cent of men at some point.

In a trial, urologists at Cairo University Hospital in Egypt successfully used Botox to treat ED in seven patients.

Of 12 participants given the muscle-relaxant, seven were able to have successful sex with their partners following a single injection.

Botox halts the release of neuro-transmitter norepinephrine, which prevents blood flow, while leaving the release of nitric oxide – vital to erections as it allows blood to flow – undisturbed.

According to US research, up to 40 per cent of men don’t respond to drugs such as Viagra.

Professor Raj Persad, consultant urologist from the Bristol Urology Associates, said of the research: ‘This initial data is worth pursuing as it may provide a solution to those refractory to all standard treatments.’