HEALTH NOTES: Hidden risk to the heart from kidney disease

HEALTH NOTES: Hidden risk to the heart from kidney disease, with sufferers 20 times more likely to die of cardiac problems

Three-quarters of Britons are not aware that kidney disease can affect the heart, a poll has found.

Roughly 1.8 million people in the UK suffer chronic kidney disease, where the organs don’t function as well as they should.

But the condition can also put strain on the heart – with studies showing kidney disease sufferers are 20 times more likely than others to die from heart problems.

This is because the heart has to pump much harder than usual to deliver blood to malfunctioning kidneys.

Fiona Loud, policy director at the charity Kidney Care UK, said: ‘Most people simply do not realise the vital role their kidneys play until they stop working properly. If detected early enough, further harm or deterioration can be delayed or even prevented.’

Campaign group Action On Salt analysed 100 popular products and found that of 62 making health or nutrition claims, 23 (37 per cent) contained levels of salt above the level recommended by the Government.

Experts warned shoppers to beware the ‘health halo’ effect, when manufacturers play up a positive aspect of a product and hope consumers don’t look at the overall picture.

Doctors at Great Ormond Street Children’s Hospital have invented a novel technique to persuade sick children to take their medicine.

The patients turn old pill bottles into ‘magic potions’ by writing their own labels such as ‘This makes me a superhero’, and describing how they want the medicine to taste.

Pharmacists secretly fill the bottles with sweets, and dispense them separately from their actual medication.

Richard Goodwin from the hospital said: ‘Taking regular medicine can be quite daunting. This helps them develop a sense of control over what’s happening and build their confidence to ask questions.’

What’s the difference between measles and German measles? 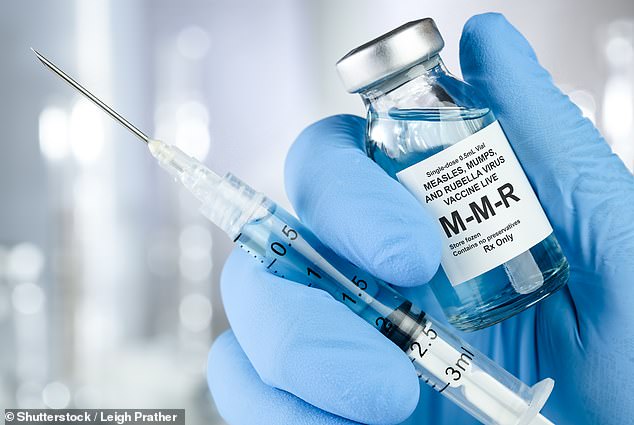 Both are contagious diseases triggered by viruses. But the viruses are different and the two diseases have slightly different characteristics.

German measles, which is also called rubella, is caused by a togavirus. It sparks a red-pink rash made up of small spots. Patients also develop swollen glands in the neck and flu-like symptoms.

The rash can take as long as three weeks to appear after the patient becomes infected.

Measles is caused by a morbillivirus. Patients suffer a cough and a rash, which usually appears as a collection of red spots.

Cold-like symptoms come on roughly a week after infection, and the rash three to five days later.

The MMR vaccine protects against both diseases.