Kids born to very obese mothers are significantly more likely to have mental health disorders like schizophrenia and substance abuse issues as adults, a study found.

University of Helsinki-led experts looked at the relationship between maternal weight and offspring mental health among 68,571 births in Aberdeen from 1950–1999.

They found that adults born of severely obese women in the period from 1975–1999 had a 60 per cent higher risk of developing any form of mental illness as adults.

However, the researchers also found that underweight mums appeared to be the greater predictor of adult mental illness among the children born from 1950–1974.

Specifically, for this group, kids of mothers who had a BMI of less that 18.5 during pregnancy were 74 percent more likely to develop a mental health issue later in life.

The former finding builds on past studies which have shown that kids born to obese and overweight mothers are at greater risk of mental health issues in childhood.

Obesity has in recent years become more common among pregnant woman, with a prevalence of 7–25 per cent in Europe and more than 30 per cent in the US.

Last year, the UK Government set out a new anti-obesity strategy, with a ban on unhealthy food adverts before 9pm and a campaign to encourage healthy lifestyles.

And plans were recently revealed for a ‘rewards programme’, to launch later this year, that will provide benefits to families who eat more healthily and get exercise.

Children born to obese mothers are 60 per cent more likely to develop mental health conditions including schizophrenia and substance abuse problems, a study has found

The study was undertaken by psychologist Marius Lahti‑Pulkkinen of the University of Helsinki, Finland, and his colleagues.

‘Our findings of time-specific associations between maternal prenatal BMI and adult offspring mental disorders may carry important public health implications,’ the researchers wrote in their paper.

The results, they added, ‘are of particular concern given the rising prevalence of severe obesity among pregnant women.’

In their study, the researchers analysed health data relating to 68,571 firstborn births that took place at the Aberdeen Maternity Hospital between 1950 and 1999.

Based on their body mass index (BMI) at around 15.7 weeks into their pregnancy, each mother was given a weight classification on a five-point scale, from underweight all the way through to severe obesity.

Finally, the team consulted the Scottish Morbidity Records and the National Records of Scotland to determine which of the children had received a mental health diagnosis between January 1, 1996 and June 8, 2017.

(The researchers had excluded from their study any child who died before this period and would, therefore, have no record of any mental health issues.)

The findings revealed that a mother’s weight during pregnancy can have long-lasting effects on their children’s mental health — with the team identifying two principal trends.

In children born from 1950–1974, having an underweight mother (BMI of less than 18.5) was associated with a 74 per cent increase in the risk of going on to develop a mental health condition such as schizophrenia during adulthood.

Yet among those offspring born between 1975–1999, it was instead maternal severe obesity that led to an increased risk of adulthood mental health issues. 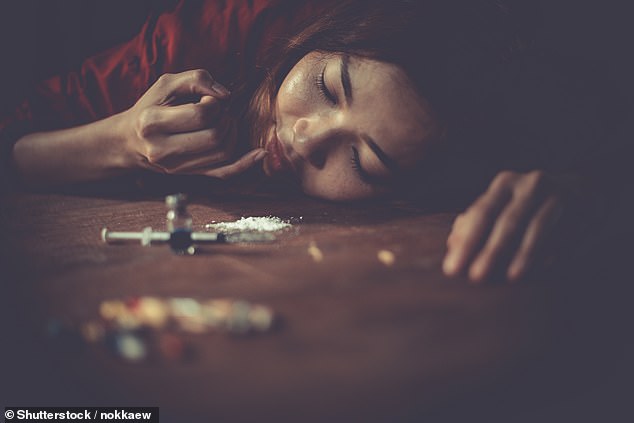 Adult children born of mothers with a BMI of 35 or higher in the period from 1975–1999 had a 60 per cent higher risk of any form of mental disorder and, specifically, a 91 and 180 per cent chance respectively of developing a substance abuse problem (pictured) or schizophrenia

What is No 10 doing to helps Brits get slimmer?

These are some of the anti-obesity policies confirmed or considered by the Government in the past year:

In fact, adult children born of mothers with a BMI of 35 or higher had a 60 per cent higher risk of any form of mental disorder and, specifically, a 91 and 180 per cent chance respectively of developing a substance abuse problem or schizophrenia.

As maternal obesity has become more common, so maternal underweight appear to have grown the opposite, falling from 3.2 to 2.1 per cent between the two groups.

The researchers noted, however, that while the relative risks had increased significantly, the absolute risk of children developing any mental health condition as adults was low, at just 1.4 per cent for the children born from 1975–1999.

‘The age specific findings in our study emerged particularly in those age groups where the exposure in question was more common,’ the researchers wrote.

However, the nature of the study’s dataset, the team explained, means that the subjects born in earlier years would have been older when their mental health conditions were logged in the Scottish Morbidity Records and the National Records of Scotland databases.

Given this, it is unclear whether the time-specific findings follow from changing consequences of maternal BMI during pregnancy or from there being different effects on different age groups of adult offspring.

In addition, the correlative nature of the study means that the researchers were unable to determine exactly what it is about a mother’s underweight or obesity that increases the risk of later life mental illness in their children.

However, the team speculated that such may be linked to physiological stresses.

‘Obesity in pregnancy is a highly proinflammatory state, and prenatal inflammation has been associated with psychopathology risk in offspring,’ they wrote.