Health: Scientists are developing a new type of pain medication from TARANTULA VENOM

Tarantula venom could provide the surprising source for a new type of strong pain medication — without the addictive risks of opioids — researchers have found.

A team from the University of California Davis are using computational biology techniques to turn poisonous peptides — small proteins — into useful ones.

One peptide in particular, found in the venom of the Peruvian green velvet tarantula, can block a channel that creates and transmits pain signals in the human body.

There is much still work to be done before the tarantula peptide can be used on patients — with the team working to ensure there are no unwanted side-effects.

Despite its name, the rare ‘Peruvian green’ tarantula (Thrixopelma pruriens) is actually found in Chile — where it grows to between 2–4 inches in length.

Docile but skittish, T. pruriens are rarely kept as pets as they will ‘defend’ themselves by firing stinging hairs into the air at the slightest provocation.

Tarantula venom could provide the surprising source for a new type of strong pain medication — without the addictive risks of opioids — researchers have found. Pictured: a tarantula

Work with tarantula venom isn’t the only avenue that UC Davis researchers are pursuing to create a non-narcotic pain relieving drug.

In fact, last year, the US Food and Drug Administration granted approval to fast-track the development and review of another drug candidate from Dr Hammock and his colleagues .

Known as EC5026, the drug targets a novel pathway that can block the underlying cause of certain types of pain and could find application in both humans and many animals.

In fact, in tests, EC5026 was found to relieve both inflammatory and neuropathic pain in cats, dogs, horses and rodents.

‘The fast-track process is designed to facilitate the development and expedite the review of new therapies to treat an unmet medical need in the treatment of a serious condition,’ commented Dr Hammock.

US National Institutes of Health’s ‘HEAL’ — Helping to End Addiction Long-term — initiative which aims to create non-addictive pain therapies and work towards ending the scourge of opioid addition.

‘For strong pain, drugs like ibuprofen or aspirin are just not strong enough. Opioids are strong enough, but they have the problem of tolerance development and addiction,’ explained team member and pharmacologist Heike Wulff.

‘Spiders and scorpions have millions of years of evolution optimizing peptide, protein and small-molecule poisons in their venom, which we can take advantage of,’ said entomologist Bruce Hammock of UC Davis.

‘The same venoms that can cause pain and neurological dysfunction can also help nerves work better and reduce pain.’

In their study, the researchers trying to stop pain signals from travelling along sensory neurons — specifically, by targeting a particular type of protein channel found on the cell membranes of neurons and muscles.

Nine types of these ‘voltage-gated sodium channels’ have been identified in humans — and are numbered from Nav1.1–Nav1.9, with the ‘Na’ being a reference to the symbol for the element sodium.

The team are the most interested in the Nav1.7 channel, as it is a key source of the signals involved in pain transmission and, crucially, can be blocked by one of the peptides found in the venom of the Peruvian green velvet tarantula.

‘The promise of a Nav1.7 inhibitor is that we would have something that is as effective as an opioid, but not addictive,’ explained Dr Wulff.

‘What we need are new medications, new therapies with improved risk profiles.’ 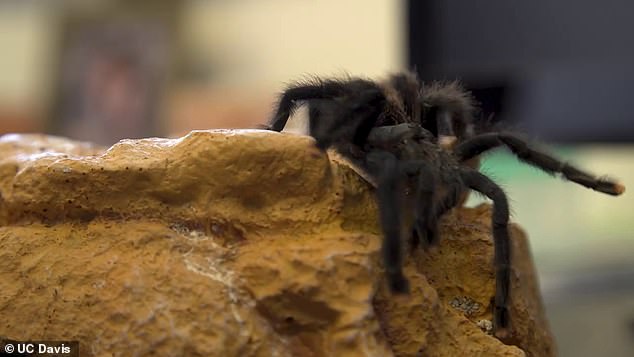 ‘Spiders and scorpions have millions of years of evolution optimizing peptide, protein and small-molecule poisons in their venom, which we can take advantage of,’ said entomologist Bruce Hammock of UC Davis. ‘The same venoms that can cause pain and neurological dysfunction can also help nerves work better and reduce pain.’ Pictured: a tarantula

At present, the drawback of the key peptide from the tarantula venom is that is does  more than just block Nav1.7 channels in the sensory nerves — in its natural form, it also acts on the cells in the muscles and the brain.

This means that it would likely cause terrible side-effects, the researchers explained, ones more fitting for use in venom than as a medication.

To address this challenge, the team are trying to modify the peptide to retain its pain-inhibiting qualities while preventing any other effects — and approach that experts have dubbed ‘toxineering’. 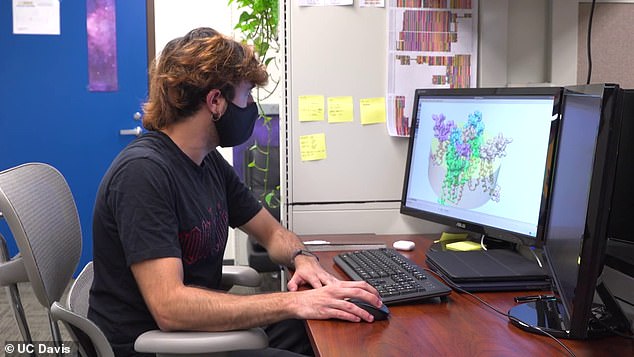 Making use of a piece of modelling software called ‘Rosetta’ that was developed at the University of Washington, the team are able to visualise many different variations of the useful peptide from the tarantula venom, which they can then synthesise and test in the lab

Making use of a piece of modelling software called ‘Rosetta’ that was developed at the University of Washington, the team are able to visualise many different variations of the peptide, which they can then synthesise and test in the lab.

‘Using the Rosetta software, we can take a natural peptide and then redesign it and make it into a therapeutic,’ said Vladimir Yarov-Yarovoy, the team’s expert in computational structural modelling of peptide toxins.

‘Our lead peptides already show efficacy at the level of morphine, but without the side effects of opioids,’ he added.

Their preliminary results are extremely promising, but a lot of work remains to be done. The potential therapeutic candidates will need to be tested in animals, and if found safe, carefully tested in humans. The researchers estimate any new medication is at least five years away.

‘What Vladimir has put together is really fantastic because no one scientist could have any hope of tackling a project that is this hard,’ Dr Hammock said, in reference to the 20-strong team of experts assembled by Professor Yarov-Yarovoy.

‘But having a collection of people makes it fun and exciting, and I think it gives us a real chance at relieving pain,’ he concluded.

ARACHNOPHOBIA IS IN OUR DNA

Recent research has claimed that a fear of spiders is a survival trait written into our DNA.

Dating back hundreds of thousands of years, the instinct to avoid arachnids developed as an evolutionary response to a dangerous threat, the academics suggest.