Healthy and home for Christmas… Britain’s most premature twins: Born at 22 weeks

Talk about a Christmas List. There’s no end to the moments Jade Crane is looking forward to celebrating on Christmas Day.

Lifting her baby twins out of their cots on Christmas morning and whirling them round as they laugh — ‘with no tubes to get in the way’ — tops her wish list.

Watching them rip the paper off their presents is another, ‘even though they will probably be more interested in the paper’.

She’s even, Jade laughs, looking forward to scraping mushed-up turkey, carrots and sprouts off the floor.

Jade, 40, and her husband Steve, 53, are celebrating their first Christmas with their baby twins

‘We’re having dinner with just the four of us, and we’ve said they can sit in their highchairs and make as much mess as they like.’

Yes, Jade admits, she might have gone a bit overboard with the ‘Baby’s First Christmas’ thing, what with the personalised baubles, festive bibs, matching elf outfits and the mountain of gifts. But who can blame her?

Her joy is palpable. Ditto the relief. Because while this isn’t technically Harley and Harry’s first Christmas, it is the first Christmas ‘our little miracles’ – as Jade calls them- have spent at home.

Little wonder their mother wants to put bells on everything.

It’s hard to quibble with the ‘miracle’ tag either because Harley and Harry are the most premature twins in Britain ever to survive. They were born in October 2021 when their mum was just 22 weeks pregnant — two weeks under the legal cut-off for abortion in the UK and at a stage that most doctors agree is incompatible with life. 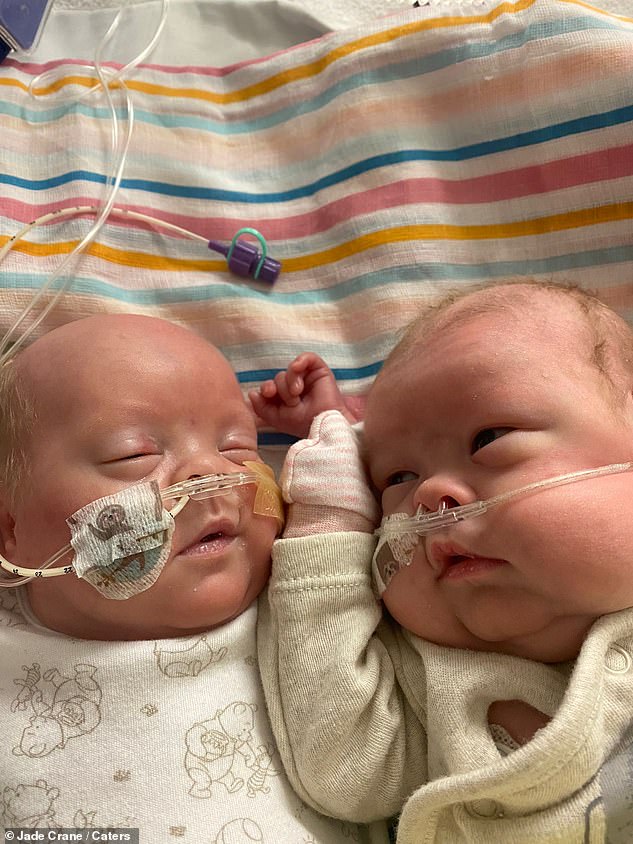 Harley and Harry Crane, are the most premature twins in Britain ever to survive

That it was touch-and-go is putting it mildly. Because in truth, no one expected these tiny scraps to survive.

Jade, 40, and her husband Steve, 53, who had been trying to start a family for 11 long years, were ushered into the bereavement suite at the Nottingham maternity unit, where it was expected they would say their very sad goodbyes.

Yet despite all the odds — thanks to the extraordinary efforts of the medical team — the twins clung to life, and kept clinging on, and on. They spent the first five months of their lives in intensive care, with everyone involved riding the most terrifying rollercoaster.

In their first few weeks, the twins had six operations between them, battling sepsis, eye problems, lung issues and brain bleeds — all common, alas, in such tiny, underdeveloped ‘premmies’. When she was seven days old, Harley underwent an operation to repair a perforated bowel, a procedure that the surgeon had never attempted on a baby so young. In fact, her parents were advised, once again, to start planning her funeral. 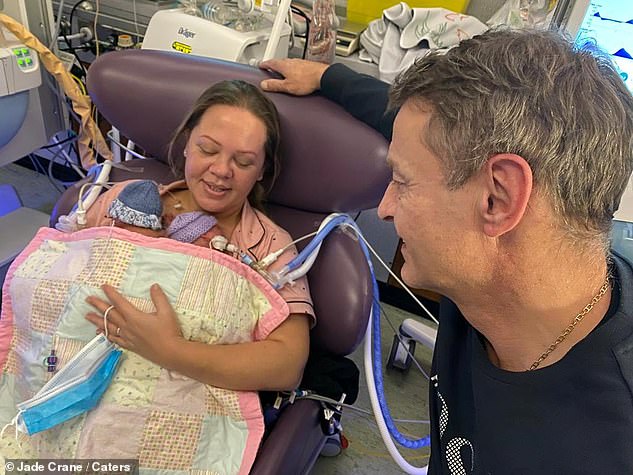 The Mail first reported the story of these miracle twins back in February, but it was a tale tentatively told because at the time the twins were still in hospital, still dependent on oxygen because their tiny lungs were not sufficiently developed to cope on their own

And yet here we are in the family’s cosy-but-chaotic living room, in Heanor, Derbyshire, with Jade looking for something to convey how tiny the twins, now 14 months old, were when they were born.

‘They were smaller than the Elf On The Shelf,’ she says. ‘Now look at them! And they haven’t just survived — they are thriving.’

Indeed. During our photoshoot there are gurgles galore and the twins cause a commotion trying to grab the fairy lights on the tree.

The personalities their mum swears were there from day one are there for the world to see — first-born Harley being the feisty one, shocking everyone in the delivery room with a tiny (but determined) cry; her brother Harry, emerging an hour later ‘with less razzmattazz’.

‘They are still the same,’ says Jade. ‘Their growth charts reflect their personalities. Harley’s leaps up dramatically, then stalls for a while. She’s the drama queen, Miss Feisty. Harry’s has gone up steadily. He’s the plodder.

‘But they love each other, which has been wonderful to watch. I did worry that because they were in separate incubators for the first months, they wouldn’t bond. And they barely had any time in the womb together. But there is such a bond there. Harley just adores Harry. She is for ever reaching for him. She smiles every time she sees him.’

No wonder Jade often recalls what Steve, who works in sales, said when, at 22 weeks and five days, she realised she was leaking amniotic fluid, which can be calamitous at such a stage in pregnancy. ‘I remember saying to Steve: ‘This could be the worst day of our lives.’ He said: ‘But it could also be the best day.’ ‘

The twins weighed little more than a Mars Bar apiece when they arrived. Harley was 500g (1.10lb); Harry was 520g (1.14lb). They would have fitted neatly in their parents’ hands, had they been allowed to hold them.

The Mail first reported the story of these miracle twins back in February, but it was a tale tentatively told because at the time the twins were still in hospital, still dependent on oxygen because their tiny lungs were not sufficiently developed to cope on their own.

By March however, they were allowed home — although the oxygen tanks came, too.

Jade tells me the big moment of freedom — when they dared to think a normal life might be possible – came in the summer, when the tubes were banished. ‘

‘There were lots of tiny breakthroughs, milestones reached, but that to me was a big one. I remember us running through the house, up and down the stairs, whirling them around. Before that we’d been tethered, really, constricted by this two-metre cable.

‘There were odd things that would never occur to you — like being able to dress them by popping things over the head. I’d always had to dress them from the bottom up, because the oxygen tubes went round the head. Getting into the car, without having to negotiate an oxygen tank, was so freeing.’

The twins remain under more medical supervision than most babies their age. They still see a lung doctor, and routinely have appointments with a physio. ‘For the first two years, they are assessed in terms of their developmental age rather than their birth date (they weren’t due until February 2022, so they’re classed as being under a year), but they are both doing brilliantly,’ explains Jade.

‘All the big things the doctors warned us might happen — like blindness — haven’t happened. They warned us that Harry might never walk, but he is already sitting and trying to pull himself up.

‘We know there still may be issues. They are talking about whether Harry might have cerebral palsy, which isn’t uncommon in premature babies. It’s too early to tell. My instinct is that Harley will be fine there, and if Harry does have it, it will be a mild version. There are a few things, such as a stiffness in his left hand, that we’re monitoring.’

You don’t even have to ask the question of whether all the worry of the past year has been worth it.

‘Even if they’d said there would be major cerebral palsy, we would have taken it,’ says Jade. ‘We knew how bad things could be but we also knew we had a pair of little fighters on our hands.’

For the twins and their parents, this Christmas is a world away from the same time last year. Then, parents and twins were together, but it was in the sterile surroundings of a paediatric intensive care unit, where the only sound was the beeping of heart monitors.

‘The nurses did their best, but you can’t really decorate an incubator,’ recalls Jade. ‘We’d bought them little decorations, though, and someone had crocheted little Christmas pudding hats, which we put on them.

‘They all went in a bag after Christmas, and I remember praying that we’d be able to use the Baby’s First Christmas decorations again — at home.’

This was still at the stage where the nurses were warning that they were acutely ill babies. Survival was unlikely. It was a sombre time.

‘On Christmas Eve — when I hadn’t actually gone home at all since they were born — the nurses did actually push me out of the unit. They needed the side room I’d been using for another family, so it was a case of no room at the inn,’ admits Jade.

‘That was the first night I’d been away from the babies. We did manage a meal out. But on Christmas Day we came back to spend it with them. We had our Christmas dinner in the hospital cafeteria.’

The couple’s emotions were all over the place then, but the festive period actually marked one of their great breakthroughs.

Jade says: ‘Christmas Day was the day Harley showed her fighting strength. She actually pulled out the tiny wire that was running to the ventilator — and showed us she could breathe on her own, albeit with a nose mask.

‘In the New Year, the doctors started using words like ‘stable’ instead of ‘fragile’. I didn’t realise it at the time, but the whole world was watching our babies.’ There have been huge implications thrown up by the survival of this incredible pair.

It’s unusual for abortions to be performed at the 22-week stage of pregnancy, but it does happen in a small number of cases.

‘But I do think that we need to have a conversation about viability,’ says Jade.

She has been more concerned about the implications for other mothers who go into labour prematurely. Her delivery was classed as a ‘miscarriage’ procedure — as is the case for any baby born under 24 completed weeks.

Because the babies were not expected to survive, it was only when Harley cried as she was being delivered that it suddenly became all systems go.

There’s no obligation on hospitals to try to save babies this tiny, and Jade believes it’s only because she had been admitted to a large teaching hospital that intervention to keep her babies alive was possible, never mind desirable.

‘We found ourselves in this grey area which I don’t think should exist,’ she says.

‘I have been contacted by someone who read about us who also went into labour at this early stage. She was able to insist on intervention, so this is not as rare as you might think, and it will probably become less rare as technology improves. ‘I want other parents to be given every chance, as we were.’