Hearing denied for man who blames killing on war flashback

New Hampshire has denied a pardon hearing request from a convicted murderer who strangled his fiancee and stabbed her seven times in the heart, which he blamed on a Vietnam War flashback.

The Executive Council voted 3-2 on Thursday not to hold a public hearing to re-examine the case of Gary Place, who was convicted of first-degree murder and sentenced to life in prison for the death of 32-year-old Wanda Olsen in 1983.

Place, who served in the US Marines, said the killing was the result of post-traumatic stress disorder after the aroma of rice cooking and the hot, muggy weather triggered a flashback to his experiences during the brutal battle of Khe Sanh in 1968.

The couple had been arguing about breaking off their engagement when the killing occurred.

This 1984 photo shows Gary Place, who was convicted of first-degree murder and sentenced to life in prison for the death of Wanda Olsen in 1983. New Hampshire has denied a pardon hearing request Thursday

According to his own testimony, Place admitted strangling Olsen with his hands and an electrical cord and repeatedly stabbing her as she lay on her bed.

During Place’s three-week trial in 1984, defense witnesses said the weather, the smell of rice cooking wafting from a nearby Chinese restaurant and the heated dispute with Olsen had triggered a response that caused the war veteran to view her as the enemy.

In closing arguments, Place’s defense attorney said while the defendant was holding onto Olsen, he started seeing images of people in black pajamas.

Assistant Attorney General Malmberg rejected the flashback theory and relied on a psychiatric expert who said that Place suffered from a paranoid personality disorder, which was not responsible for the attack. 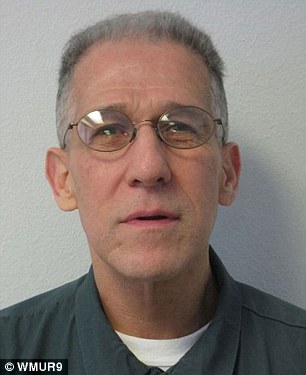 Place, who has been in prison for the past 34 years (pictured in a recent mugshot), said the killing was the result of post-traumatic stress disorder

Place testified that he had strangled the woman when she cursed him and refused to return his engagement ring. He said he remembered grabbing an extension cord, but not wrapping it around her neck six times. He said he also remembered getting a knife from the kitchen and stabbing her.

The defense said Place was a ‘normal teenage kid with a normal upbringing, strong religious ties and strong family ties’ who joined the Marines and was taught a ‘survival instinct and skills to do what he had always been taught not to do: to kill.’

After the killing, he turned himself in at the police station and demanded an execution date.

In May 1984, Place was convicted of first-degree murder after more than nine hours of deliberations and sentenced to life in prison without the possibility of parole.

After hearing the verdict, Place asked the presiding judge to have him executed instead, but was told that the law required that he be sentenced to life in prison.

One juror and the prosecutor of the case, John Malmberg, said a determining factor in the conviction was that Olsen was alive for at least two minutes during the struggle – a point repeatedly made during the trial. Prosecutors also argued that Place’s decision to stab her with the sharpest kitchen knife he could find showed he knew what he was doing.

The New Hampshire Coalition Against Domestic and Sexual Violence opposed the request and welcomed the vote, reported the station WMUR. 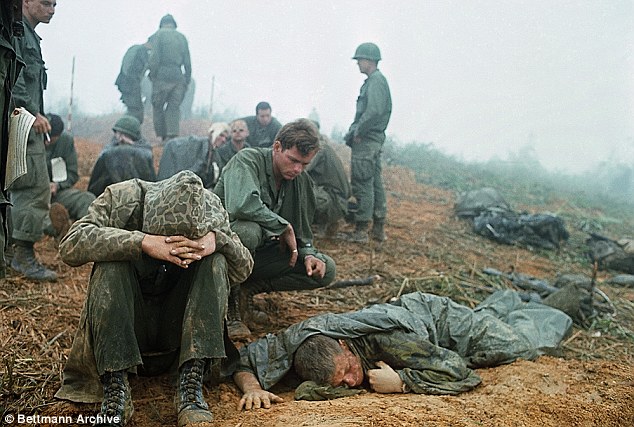 Place claimed the smell of rice cooking and the hot, muggy weather triggered a flashback to his experiences during the brutal battle of Khe Sanh in 1968 (pictured)

‘Today’s decision sends a strong message that NH leaders take the crime of domestic violence, and offender accountability, seriously,’ Amanda Grady Sexton, a spokeswoman for the New Hampshire Coalition Against Domestic and Sexual Violence, said in a statement. ‘Today, our thoughts are with Wanda Olsen, who will never be pardoned from the death sentence given to her by her killer.’

New Hampshire Attorney General Gordon MacDonald testified ahead of Thursday’s vote. He argued that Place should not be granted the hearing.

Ahead of the hearing, Malmberg told the Concord Monitor that Place should have been convicted but that he had repaid his debt. He deserved a second chance – especially now that there is a better understanding of PTSD.

Executive Councilor Joseph Kenney, a Republican, said he voted to hold the hearing so that the public could learn more about the case as well as PTSD. He did, note, however that he would not have voted for a pardon.

‘It was a lost opportunity to learn about the case 34 years later and to better understand how we better diagnose PTSD today and how our mental health system has advanced and how we have created veterans protocol to evaluate combat veterans who leave service today,’ he said.

Place attorney Cathy Green said Place and his family were disappointed that there would be no hearing but would keep fighting for his release.

‘I hope that some day in the future, this man who has done so much good for others within the prison system, and has been fully rehabilitated, can rejoin society where he has an immense amount to contribute,’ Green said in a statement.