The president of Hearst Magazines  resigned yesterday after coming under fire for being promoted despite complaints of making sexually offensive remarks.

Hearst is the latest media company to face a reckoning as current and former employees come forward and accuse leaders of running a harmful work environment.

Troy Young, who joined the company in 2013 and became president in 2018, is at the forefront of complaints for making lewd, sexist remarks at work where he allegedly joked he required a ‘bigger’ sex toy, asked a pregnant staffer if the baby was his, and emailed pornography to a high-level Hearst editor, according to a New York Times report.

‘Troy Young and I have agreed that it is in the best interest of all of us that he resign his position as president of Hearst Magazines, effective immediately,’ Hearst President and Chief Executive Steve Swartz said in an email to staff.

Young sent a note to staff, the day before his resignation, which said that he was ‘sorry’ for the comments and understood how they were perceived as offensive, adding that they do not represent him as a person.

‘I am sorry and I am committed to the work I need to do here,’ he wrote in the note, a copy of which was reviewed by The Wall Street Journal.

Young, 52, was promoted to Hearst Magazines president after at least four employees complained of his bullying or harassing behavior to the human resources department or to senior executives, according to four former Hearst employees who spoke anonymously for fear of retaliation.

Hearst Magazines owns publications such as Esquire, Cosmopolitan and Elle.

Hearst Magazines president Troy Young, 52, has been accused of making sexual, lewd remarks to employees and was promoted despite complaints against him

Young revamped the corporate structure at Hearst where he had editors of the magazine websites report to him directly and he allegedly replaced ‘high-priced veteran print editors’ with digital editors with low salaries.

On one occasion Young reportedly emailed pornography to a high-level Hearst editor Jay Fielden, three people with knowledge of what happened reported.

Fielden left Hearst last May where he had been the top editor of Esquire and Town & Country.

In 2013 at a Cosmopolitan holiday party Young joined a group in which a young staff member was describing a bad date with a man who complained of an ex-girlfriend’s odor.

The woman, who asked to be anonymous, said Young told her she should have inserted her fingers into herself and asked her date if he liked her smell. The woman was so shocked by his comment she walked away.

Two Esquire staff members witnessed the incident and confirmed it. 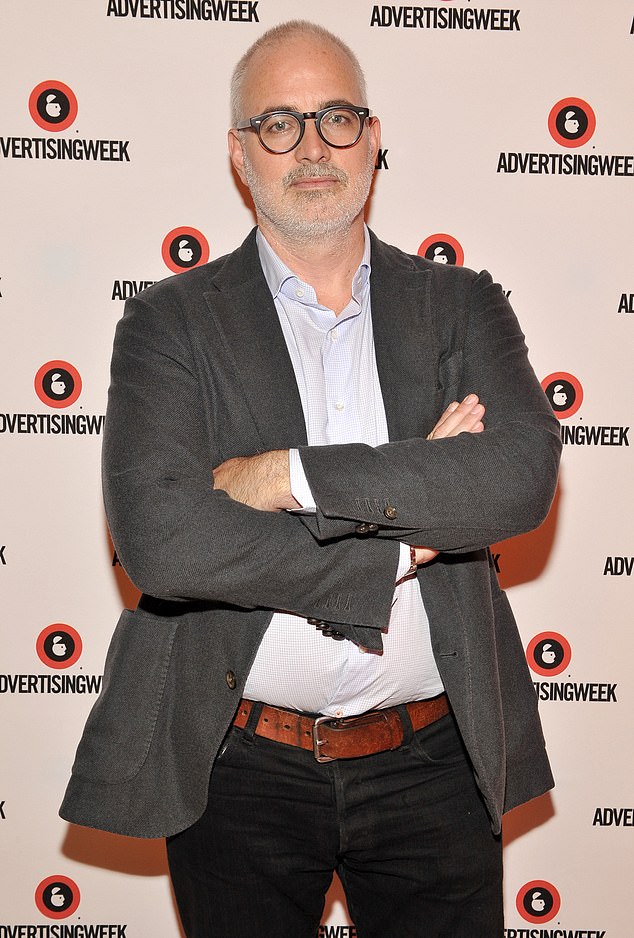 Current and former staffers said Young, who became president in 2018, asked a pregnant staffer if the baby was his, joked about needing a ‘bigger’ sex toy, and emailed pornography to an editor. He denies the allegations as ‘untrue, greatly exaggerated or taken out of context’. Young pictured attending an event in 2015

‘I think he violated the decency of what was otherwise a friendly conversation. It has been something that I wish I had done something about in the moment for a very long time,’ Nate Hopper, who was an assistant editor at the time, said.

One another occasion during a visit to Cosmopolitan’s office while he was head of digital media he picked up one of the sex toys that had been sent to the magazine and asked to keep it. Referring to the openings of two toys he said he would ‘definitely need a bigger one,’ the people said.

Former senior editor at Cosmopolitan Michelle Ruiz, who is now a contributing editor at Vogue.com, said one time in the Hearst cafeteria Young joked with her ‘So, is the baby mine?’ while she was heavily pregnant.

‘For an executive at the company to suggest that he’d impregnated me was clearly inappropriate,’ she said. ‘There’s a real hypocrisy to elevating this man to lead a company populated with magazines that are preaching women’s empowerment on their covers.’

Young in a statement to the Times said that the allegations are ‘untrue, greatly exaggerated or taken out of context’.

‘The pace of evolving our business and the strength of my commitment is ambitious, and I sincerely regret the toll it has taken on some in our organization,’ he said.

Speaking on that holiday party he said: ‘Candid conversations about sex defined the Cosmo brand for decades, and those who worked there discussed it openly.’ 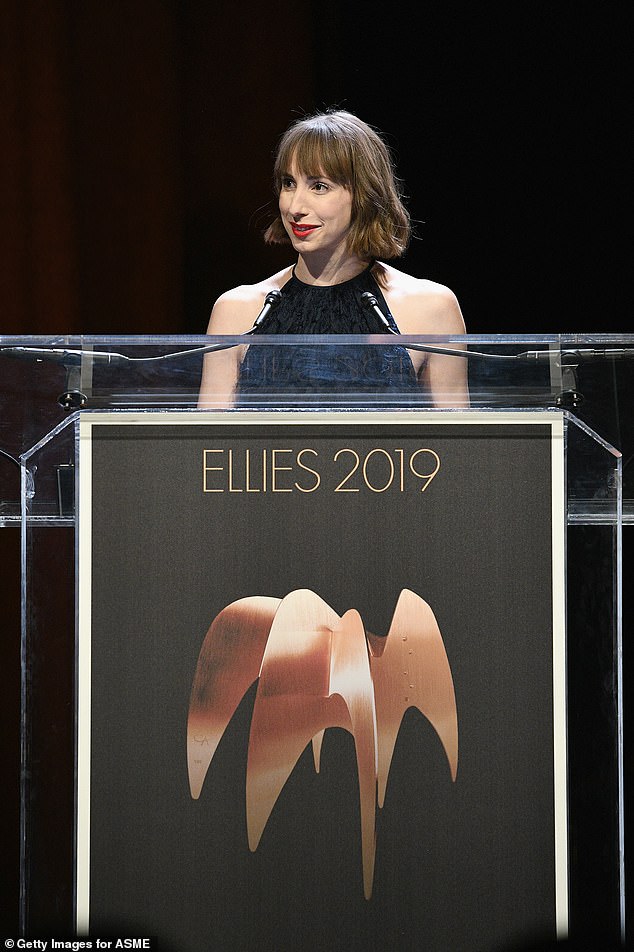 A top Cosmopolitan magazine editor Jessica Pels, who used to work at Marie Claire, has also come under fire for racial discrimination and tokenizing staff. Pels pictured accepting an award at the Elle Awards in 2019 in New York City

A Hearst Magazines spokeswoman similarly blamed complaints on his ‘pursuit of excellence’.

She said his ‘relentless pursuit of excellence was at times combined with a brash demeanor that rubbed some the wrong way. Since being named president of the division, he has worked to develop a more inclusive management style.’

Hearst is yet to reply to DailyMail.com’s request for comment.

The allegations against Young are only the tip of the iceberg. 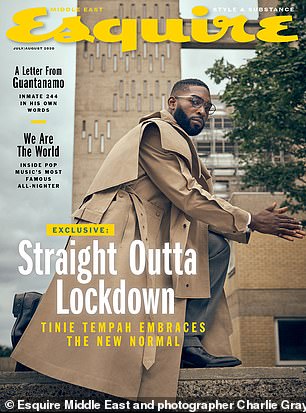 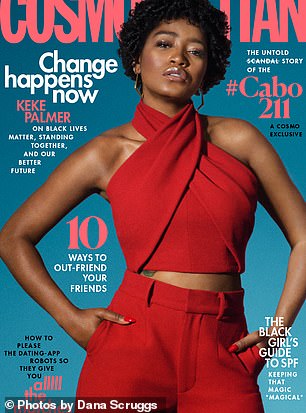 Within magazines at the company, staffers faced a culture of discrimination and tokenism, employees say.

The bulk of the allegations centered on Jessica Pels, Cosmo’s youngest top editor in 2018 who formerly was the digital head of Marie Claire.

Last month she was blasted on social media by former staffer Jazmin Jones, who worked with Pels as a video editor at Marie Claire.

Jones, who is black, accused the company of racial discrimination where she was made to feel uncomfortable in threads that touched on race in the interoffice communicating app Slack.

‘I was the only black employee at the magazine and, in addition to being a one-woman video department, I had to ‘sensitivity read’ articles on skin bleaching. I still have post-traumatic Slack stress from the daily micro aggressions,’ Jones shared in her post on June 6.

In one of those Slack messages Jones shows that an editor she identified as Pels made negative comments on the hair and make-up of a staff member of color during an on-camera appearance for a Marie Claire video.

Pels appeared aware her comments were offensive and joked her remarks were a human resources violation.

‘I wonder if we want to like …do a little more hair and makeup on the people in our vids…[redacted] you always look great, as do you Jazmin…but like [redacted] and [redacted] could use a hair brush…. #HRViolation.’ 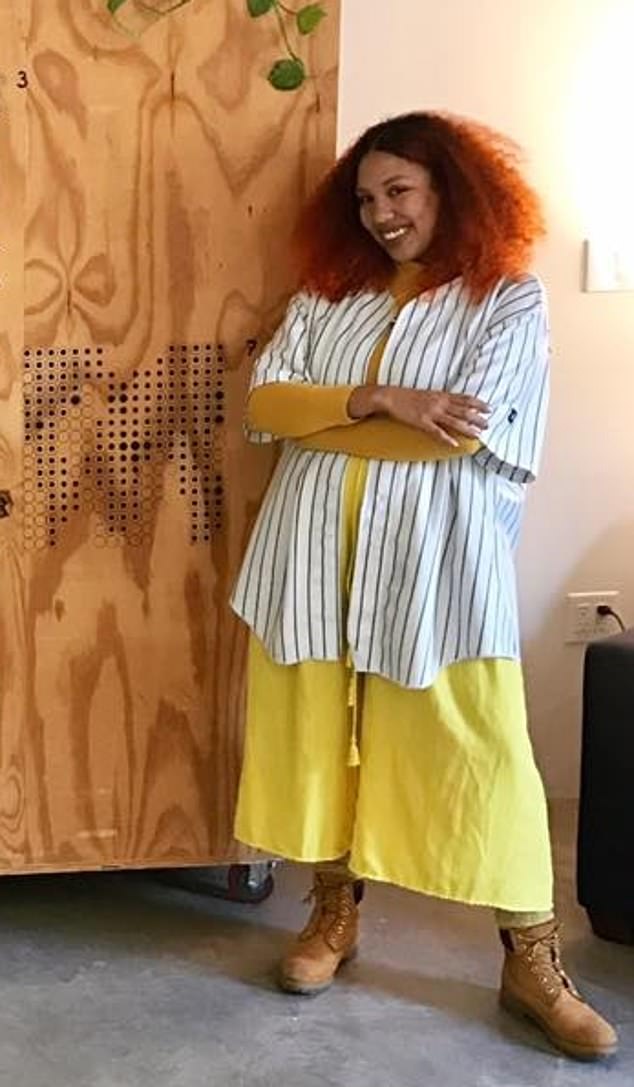 Jazmin Jones blasted Marie Claire, where she previously worked as a video editor, for fostering a toxic environment and racial discrimination in a post on social media on June 6 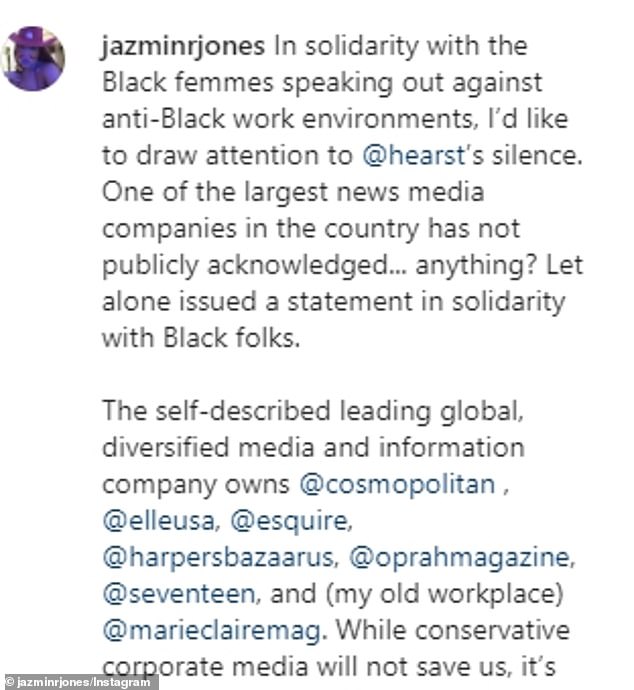 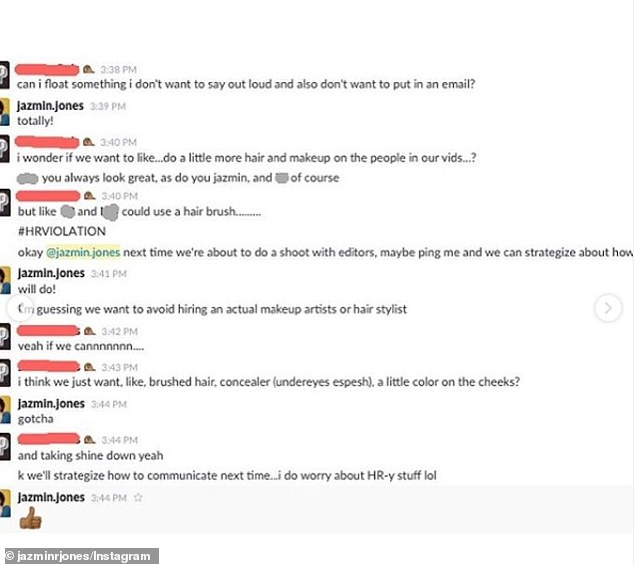 Jones worked with Pels during her time at Marie Claire. She shared screenshots of Slack messages with Pels she made negative comments on the hair and make-up of a staff member of color in a video for the Marie Claire website

In a video conference held last month for Cosmopolitan staff a woman of color confronted Pels over being pulled into meetings she would not normally be a part of when camera crews were present.

She said that she was being tokenized and her inclusion was to perpetuate a false appearance of staff diversity, according to a recording of the meeting obtained by the Times.

Prachi Gupta, who covered politics for Cosmopolitan during the 2016 presidential campaign before Pels became editor, said she felt black and brown women were made to ‘feel less than equal’ and she was underpaid at the company.

‘Because there were no women of color in leadership positions, I was not able to seek advice or counsel when I was pushed into some of the uncomfortable positions,’ she said.

Prachi Gupta, who covered politics for Cosmopolitan during the 2016 presidential campaign before Pels became editor, said she felt black and brown women were made to ‘feel less than equal’ and she was underpaid at the company. Pictured at 72nd Writers Guild Awards in February 2020 in New York City 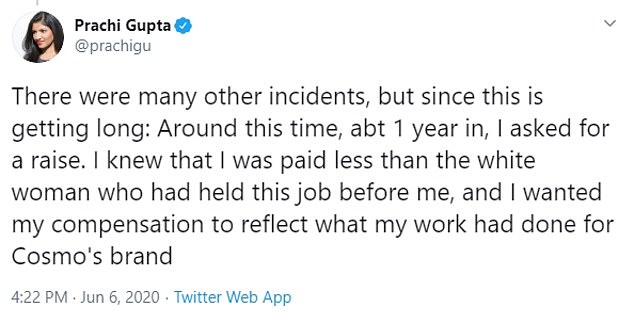 Gupta, who is Indian-American, shared a Twitter post on June 6 calling out how she was tokenized in the news room.

‘From the get-go, I was tokenized. A white PR person at Hearst told me that it would be easy to book me for media appearances because my look was ‘very on trend,’ and it was clear she meant that I wasn’t white,’ she said.

She landed big interviews for the outlet, including one with Ivanka Trump that ‘broke traffic records for the site’, but was denied a big raise and made less than her white predecessor.

‘I have not done enough to correct imbalances,’ she said according to audio recording of the meeting.

She said in a statement to the Times that diversity was a ‘career-long priority for me.’

‘At this pivotal moment, my team and I have been making real changes and having extensive, honest and passionate discussions about the progress that needs to be made, and the work I can do as a leader to actively facilitate it,’ she said. 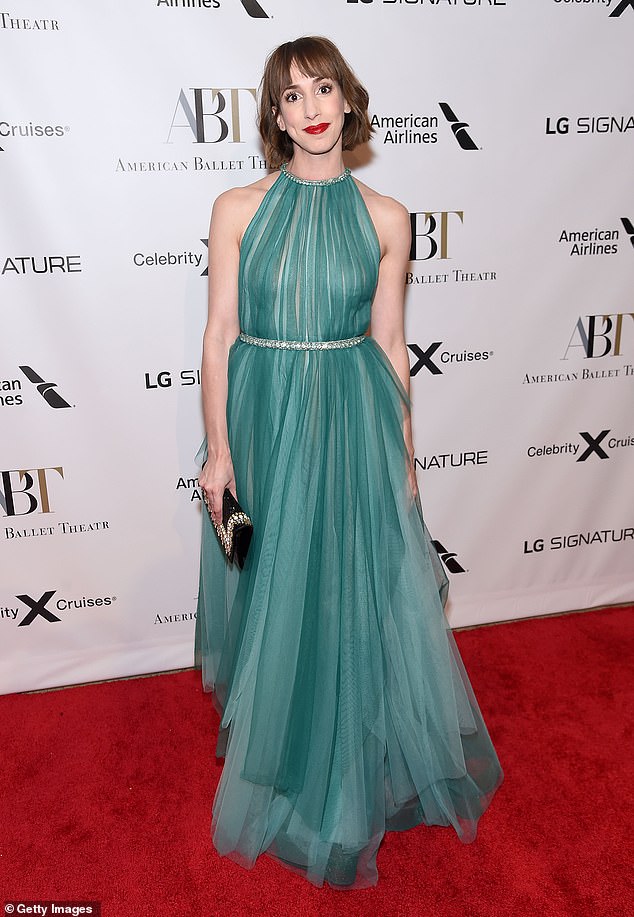 In a video conference staff meeting Pels gave a tearful apology to her employees saying: ‘I have not done enough to correct imbalances’ 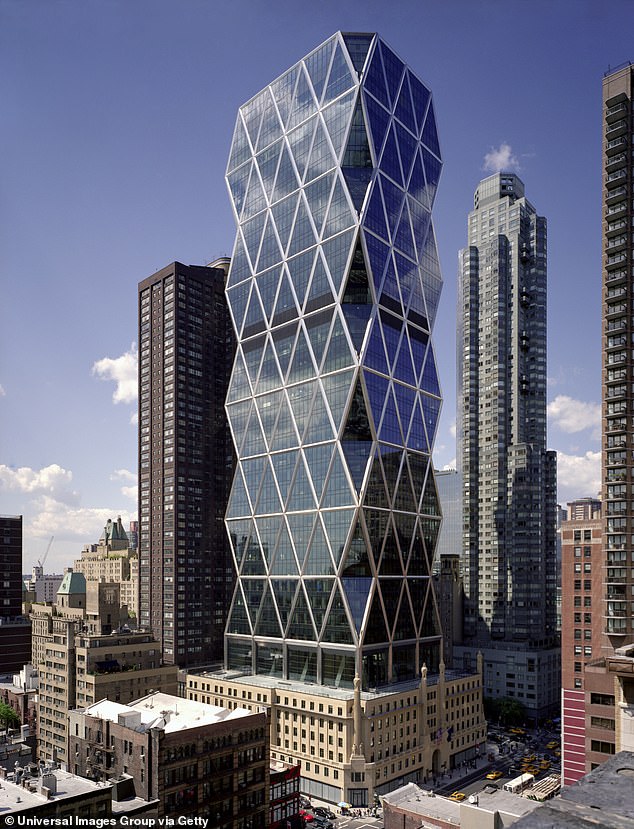 A view of Hearst Tower in Midtown, New York above

The Hearst reckoning comes on the heels of similar shake-ups at Conde Nast, the New York Times, The Philadelphia Inquirer, The Wall Street Journal and Refinery29.

Since then there’s been some internal change.

Last month Hearst Magazines appointed Samira Nasr, who was previously Vanity Fair’s fashion director, as the top editor of the US edition of Harper’s Bazaar.

She’s the first woman of color to hold that job.

In Cosmopolitan’s office, they’ve started an initiative called ‘Cosmo Can Do Better’ which seeks to hire more black staffers and people of color.

The magazine released staff statistics saying its work force was made up of 29 percent black people and people of color and 61 percent white employees with 10 percent undisclosed. The survey said leadership was comprised of 21 percent people of color.

However, some say that Cosmo’s efforts are counter to Hearst’s company leadership by Young.