When five-year-old Slade Thompson woke up from surgery to have his tonsils removed, he was in pain and crying.

The little boy, from Renovo, Pennsylvania, wanted to see his mother, but she wasn’t allowed to be in the room yet until his vitals were checked.

So Slade asked one of his nurses, Annie Hager, if she would snuggle with him. She immediately said yes, and crawled into bed with him, giving him a tight hug.

The sweet moment was captured on camera and has been shard more than thousands of times across social media. 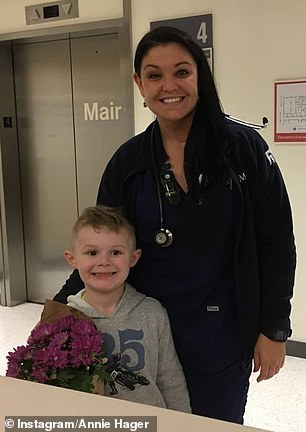 Slade Thompson, five, from Renovo, Pennsylvania, woke up crying for his mother after tonsil surgery last month. He asked one of his nurses, Annie Hager, 35, if she would snuggle with him. Pictured, left and right: Slade with Hager 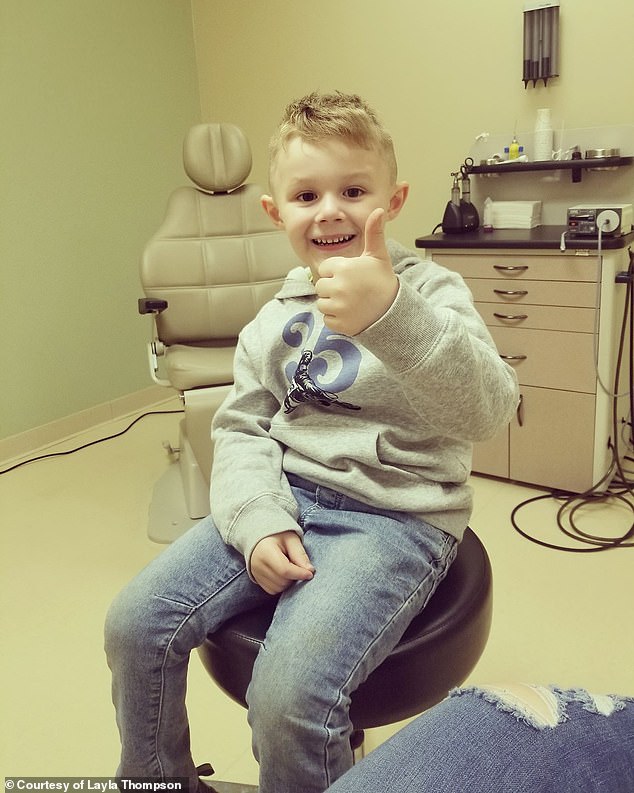 Hager cuddled Slade (pictured) for five to 10 minutes until he fell asleep, which is when Slade’s mother was allowed to enter the room

Slade and his mother, Layla Thompson, are no strangers to hospitals, but they can still be scary places for five-year-olds.

Thompson, told DailyMail.com that her son has been visiting several hospitals and doctors since age two due to an unrelated medical condition.

As a toddler, Slade began walking on his toes rather than putting his whole foot down on the ground.

‘It was full-blown ballerina tip-toes,’ Thompson said. ‘It got to the point that he couldn’t put his heel on the floor.’

Doctors discovered he had an extremely tight Achilles tendon so, in January 2019, surgeons at Children’s Hospital of Philadelphia lengthened the tendons in both legs.

Slade was in a wheelchair for two months and had to learn to walk ‘heel toe, heel toe,’ according to Thompson.

Then, on April 18, Slade was admitted to the University of Pennsylvania Medical Center Susquehanna for a tonsillectomy, a procedure to remove the tonsils, for breathing problems.

The tonsils are two small glands that are located at the back of throat that help prevent viruses and bacteria from entering the nose and throat.

Currently, about 20 percent of removals are for infection and 80 percent for obstructive sleep problems, according to the American Academy of Otolaryngology – Head and Neck Surgery.

A complete recovery typically takes between 10 days and two weeks.

Thompson and her fiancé were in the waiting room when Slade awoke but, before they could go see him, his nurses had to check his vitals.

‘Kids are generally afraid when they wake up from surgery, they’re in pain, and Slade wanted to see his mom,’ Hager, the nurse, told DailyMail.com. 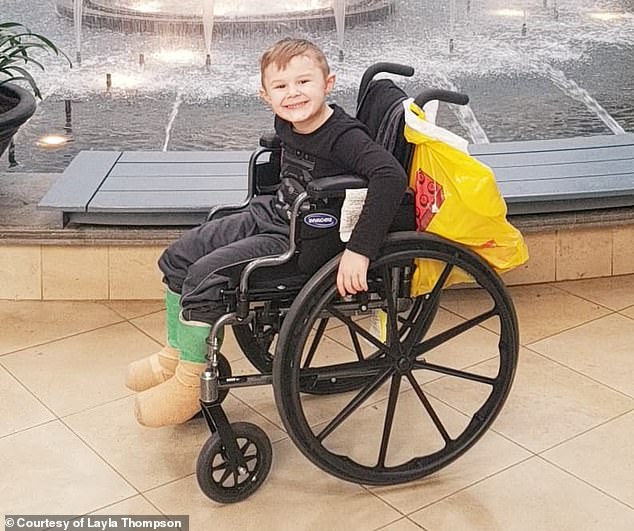 The photo has been shared on Facebook where it has more than 5,100 likes and more than 630 shares. Pictured: Slade in a wheelchair after surgery in January 2019 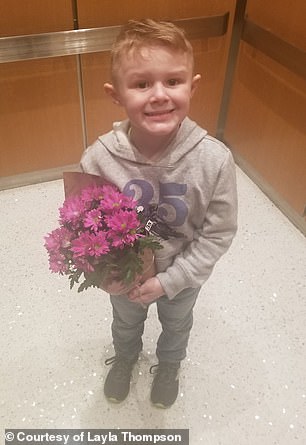 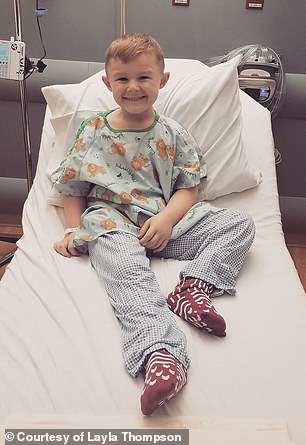 At a follow-up appointment a few days later, Slade brought flowers to Hager. She and Slade’s mother have become friends and plan to get their kids together over the summer. Pictured: Slade bringing flowers to Hager, left, and in the hosptial, right

So Hager climbed into bed with Slade and held him for about five to 10 minutes, during which time he fell asleep, which is when Thompson peeked around the corner.

‘I knew right away that she had to be a mom,’ Thompson said, and Hager does in fact have two children of her own.

‘I turned the corner and he was sleeping. And I said: “Can I take your picture?” Slade must have heard my voice because that’s when he woke up.’

The photo, along with another of Slade and Hager, has been shared on Facebook where it has more than 5,100 likes and more than 630 shares.

‘None of us were expecting us to get this reaction,’ Hager said. ‘It’s just heartwarming to be there for the kids. Kindness is free, so why not give it out?’

At a follow-up appointment a few days later, Slade and his mother brought flowers – which the boy picked out himself – for ‘his Miss Annie’.

‘He gave me a big hug and I just started to cry,’ Hager said.

Hager and Thompson have developed a friendship and plan on getting their kids together over the summer.

‘Nurses, they’re paid to take care for you, not to care about you,’ Thompson said.

‘[Hager]was paid to take his vitals, not hold him. She could have just said: “No, mom’s coming.” But she didn’t. She comforted him.’