As gunfire rang out and screams echoed through the hallways of their school on Wednesday, students at Marjory Stoneman Douglas High School frantically sent goodbye text messages to their families – unsure if they would make it out of the blaze of bullets alive.

On Thursday, senior Sam Zeif, 18, shared the text messages he exchanged with his little brother Matthew, 14, who was in a different class in the school when gunman Nikolas Cruz, 19, attacked.

Shortly after the shooting started, the worried older brother shot Matthew a text message asking ‘Are you okay’.

‘Hopefully,’ Matthew responded. ‘Just know, I love you forever and your the best brother.’ 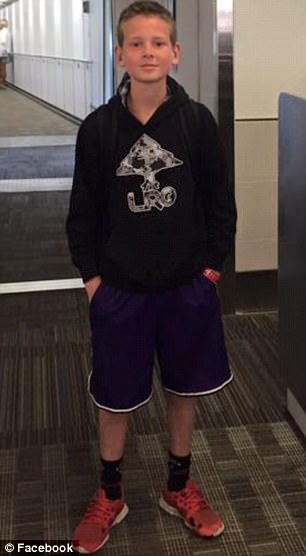 Brothers Sam (left) and Matthew Zeif (right) were both in class on Wednesday when gunfire rang out at Marjory Stoneman Douglas High School in Parkland, Florida 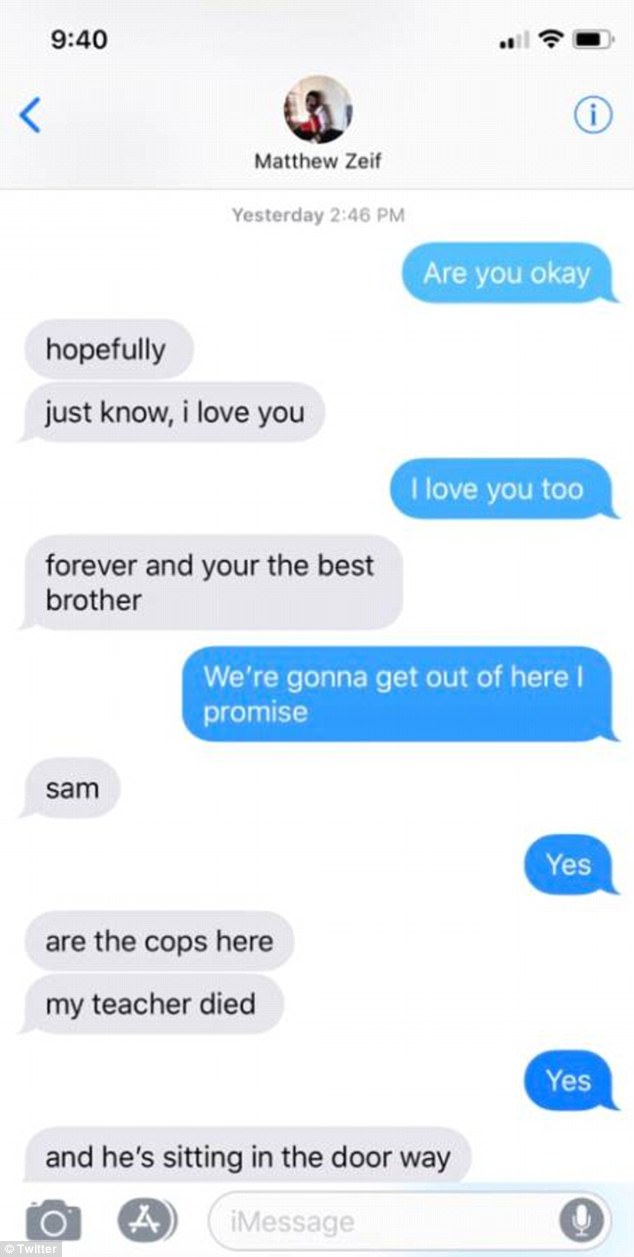 Sam, 18, released these text messages that he exchanged with his little brother Matthew, 14, as the two his from the gunman on Wednesday 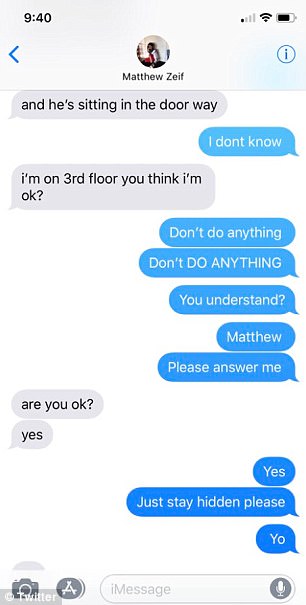 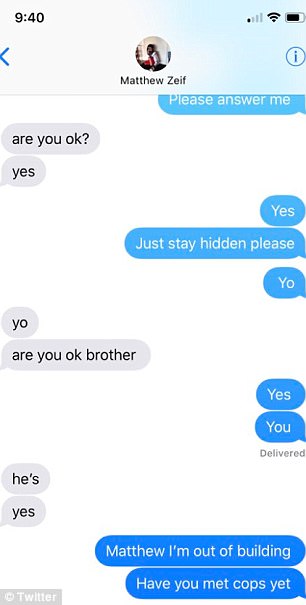 Luckily, both Zeif brothers got out alive. But during their uncertain moments hiding from the shooter, they said their goodbyes 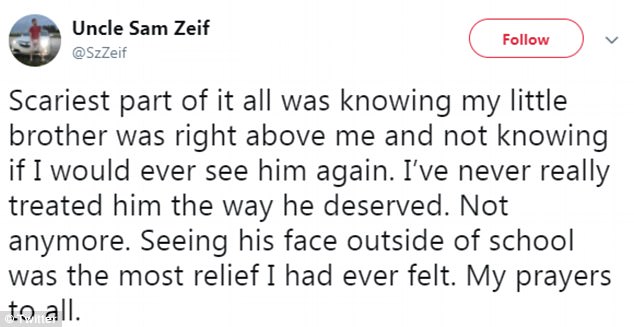 The incident made Sam Zeif, a senior, reevaluate the way he treats his younger brother

‘We’re gonna get out of here I promise,’ Sam said, trying to reassure his brother.

Their mother Jennifer told the New York Times that her younger son was the last person he ushered into his classroom before he was shot dead by the deranged gunman.

It’s an act of bravery that Jennifer will always be thankful for.

‘Mr. Beigel could have passed Matthew up and gone in the classroom first,’ Jennifer said. ‘In that case, Matthew would have been the one in the doorway.’

Matthew was then forced to watch the beloved teacher bleed out on the floor. 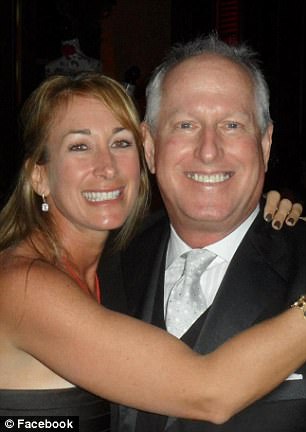 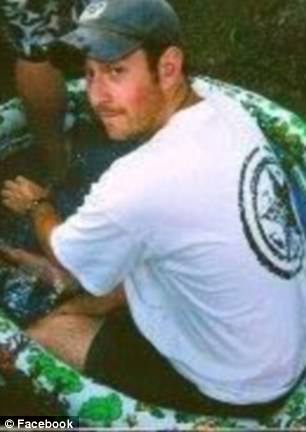 The Zeif brother’s mother Jennifer (left, with her husband Doug, center) says geography teacher Scott Beigel (right) saved her younger son’s life by ushering him into his classroom. He was soon shot dead 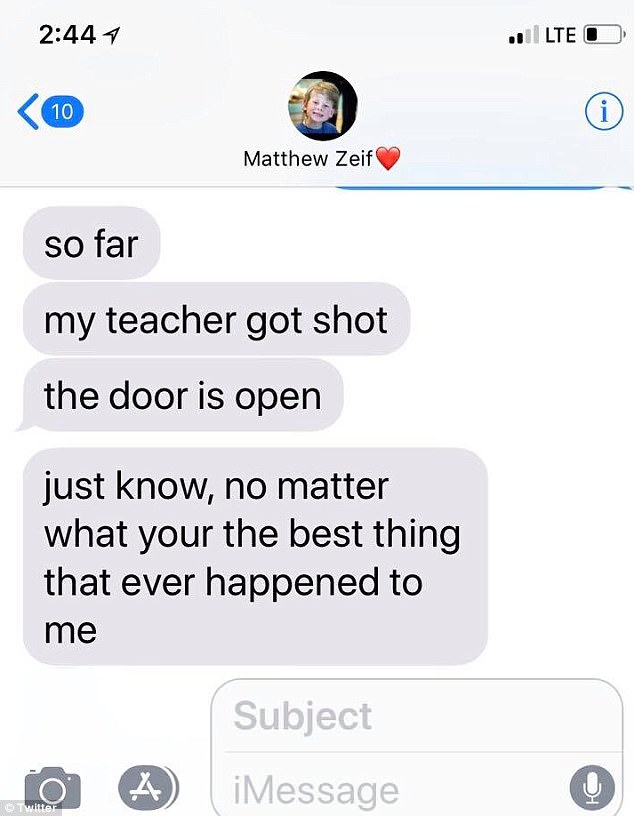 Mrs Zeif also released her text messages with her younger son, in which he says that she’s the best thing that every happened to me’ 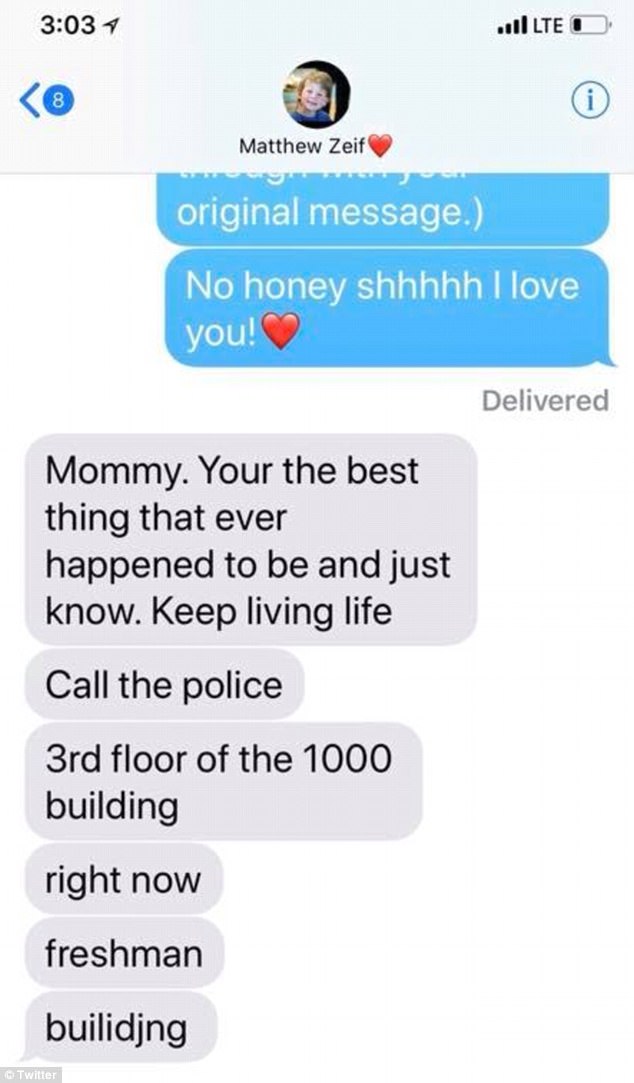 In them, Matthew tried to make sure his mother knew how much he loves her.

‘Mommy. Your the best thing that ever happened to be and just know. Keep living life,’ he wrote in one text.

When he released the text messages, Sam tweeted that the scariest part of the shooting was not knowing whether he was going to see his brother again.

‘I’ve never really treated him the way he deserved. Not anymore. Seeing his face outside of school was the most relief I had ever felt,’ he said. 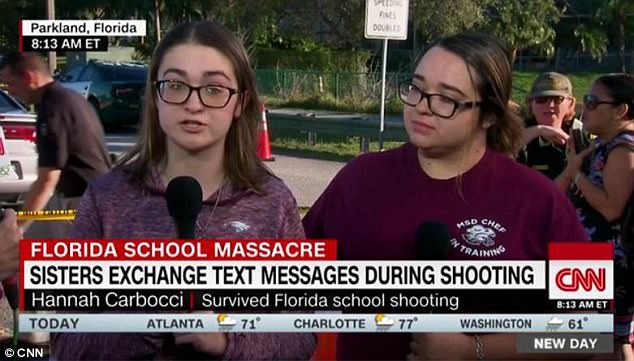 Hannah Carbocci, 17, had a similar text message exchange with her sister Kailtin, 19, who was at work at the time 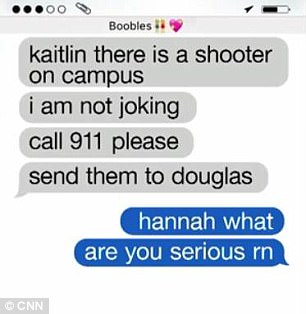 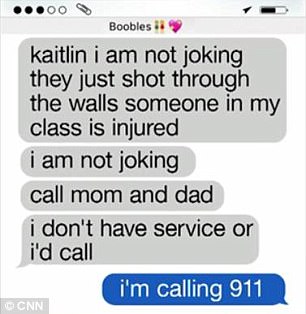 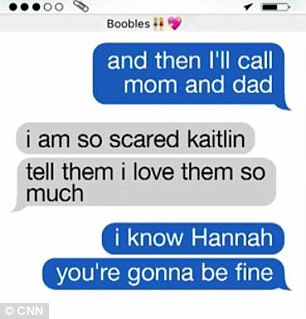 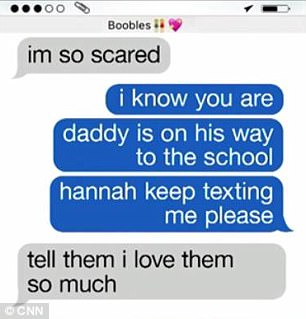 Hannah then told her sister that she loved her, and told her to tell their parents the same thing

Another survivor, 17-year-old Hannah Corbucci, released a similar text message exchange she had with her 19-year-old sister Kaitlin, who was working at the time, to CNN.

Hannah tried to call 911, but she didn’t have service. Somehow she was still able to send text messages though, so she alerted her older sister as she hid from the gunman under her teacher’s desk.

Like the Zeif brothers, Hannah faced the difficult task of saying goodbye to her loved ones, way before her time.

‘I’m so scared I can’t make any calls I love you,’ she said.

Later, she told her sister to make sure to tell their parents that she loves them too.

‘I know Hannah, you’re going to be fine,’ Kaitlin reassured her sister.