A brave family have shared the heartbreaking moment they lost their newborn son to a deadly virus and hope it can save the lives of other babies.

Denise and Mat Brajkovic from Wentworth Falls in the Blue Mountains lost their six-day-old baby son Julian to a rare enterovirus.

It took just 48 hours for baby Julian to deteriorate from being slightly grizzly and uninterested in food to severe internal bleeding, liver failure and, finally, brain death. 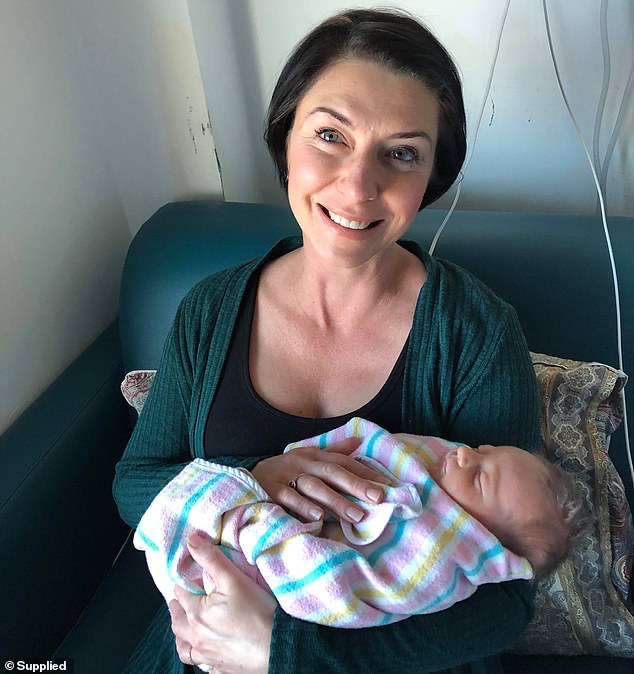 Baby Julian had been born with the enteric cytopathic human orphan virus, known as Echovirus 9, after contracting it in utero from his mother.

Enteroviruses live in the gastrointestinal tract and are spread by the faecal-oral route.

Ms Brajkovic believes she caught it at a shopping centre when she was 35 weeks’ pregnant.

Concerned, Ms Brajkovic went to the hospital for a health check.

‘They did blood tests and urine tests and everything came back okay,’ she said.

‘The baby was fine. I was discharged and told to rest and take Panadol to control any fever.’

After a day she felt better and resumed her preparations to deliver baby Julian within the week.

Neither the couple nor the hospital knew that Echovirus 9 had been passed to baby Julian in utero. 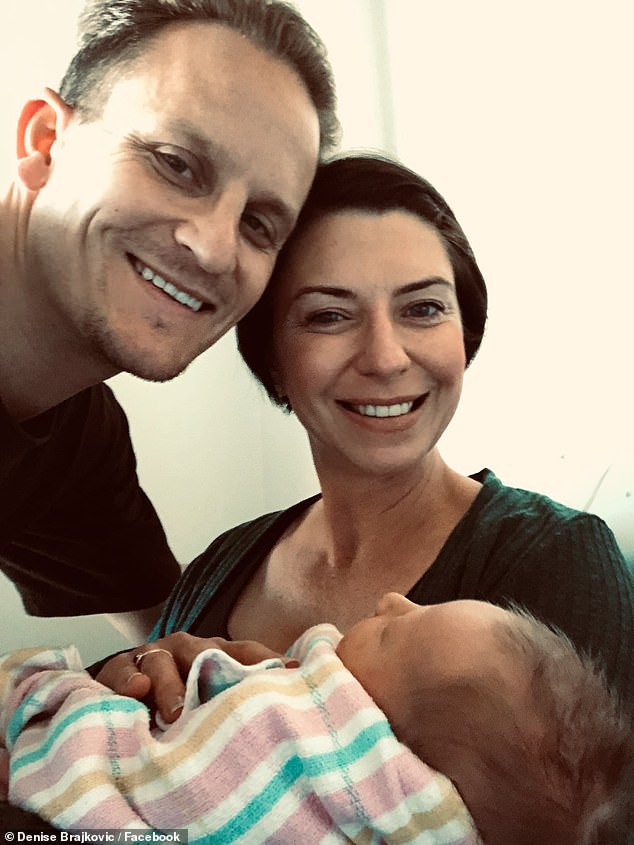 Denise and Mat Brajkovic had no idea that baby Julian had been infected with the enterovirus Echovirus 9, deadly to newborn babies, while still in his mother’s womb

Enteroviruses are a common cause of illness in adults, responsible for about a billion infections each year worldwide, the majority of which are asymptomatic.

The Echovirus 9 strain, however, is rare and deadly in newborns who have no immunity unless it is passed on by their mothers.

Because the infection was at such a late stage of pregnancy, baby Julian was infected but was not inside his mother’s womb for long enough to receive immunity, Ms Brajkovic said.

Ms Brajkovik said if she had known about the Echovirus, she could have chosen to keep Julian in utero for longer to give him a chance to develop some resistance.

Instead, he was born – seemingly healthy – on July 9. After three days he began losing interest in food as the virus began to take hold.

‘He was a bit grizzly and didn’t really want to feed as much. I asked the nurses and doctors if this was ok, and they assured me it was normal.

‘Deep down inside I didn’t have a good feeling. He was a bit jaundiced they said, but his jaundice count was low.’

On day four, the mother and son were discharged from hospital and Ms Brajkovic was happy to be home.

Two days later it was clear that something had gone horribly wrong with baby Julian.

He became lethargic and would not feed. 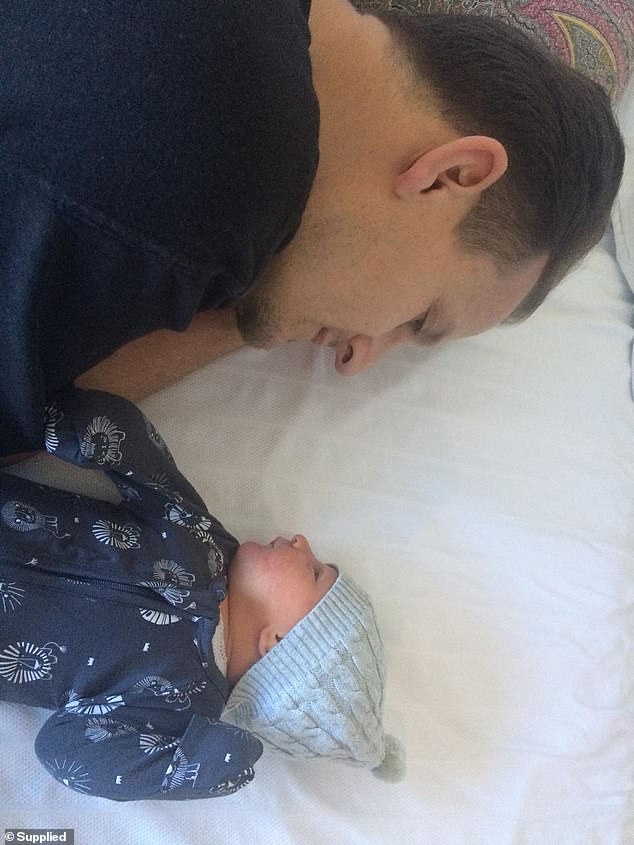 Babies can acquire immunity from their mothers but because Julian was infected in late-stage pregnancy, he was not inside the womb for long enough to develop immunity, his mother said 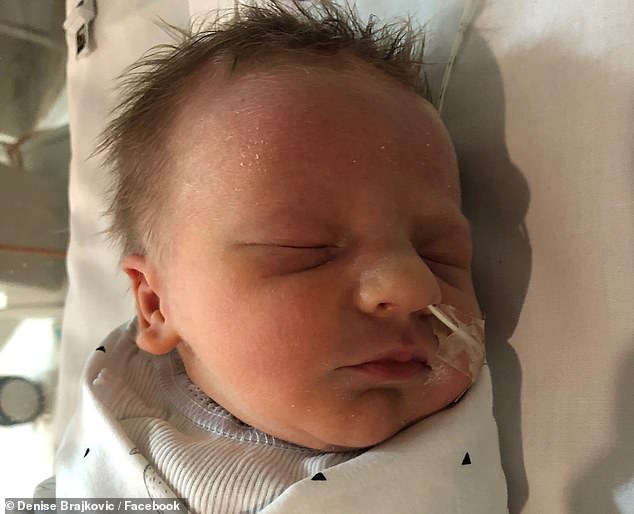 Baby Julian was released from hospital on Day 4 but within two days it became clear that something had gone horribly wrong. He stopped eating and started bleeding internally

‘We knew something was not right,’ Ms Brajkovic said.

‘We rushed to our local hospital emergency ward and they started working on him, perplexed that nothing they were doing was working.’

When the baby showed signs of severe internal bleeding and liver failure, mother and son were flown to Westmead Children’s Hospital where the doctor on call immediately recognised Echovirus 9.

‘Rarely contracted. Deadly to infants. No cure. No drugs that can save him. Those words were unbelievable to hear,’ Ms Brajkovic said, recounting the terrible event.

‘How could this be? Not in this day and age?’

Doctors tried everything they could to save baby Julian who fought to stay alive for five hours.

‘They worked on Julian tirelessly trying everything they could,’ Ms Brajkovic said. 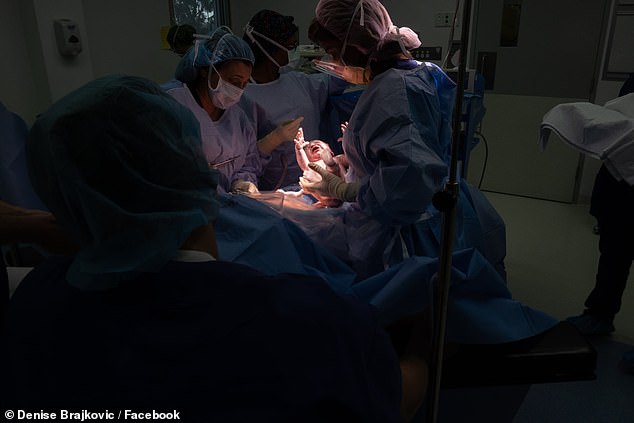 ‘The Doctor came in to advise us that they had tried everything and that the brain scan had shown he had severe bleeding and that he was brain dead. Mat and I then had to make the most unimaginable decision to have our son taken off life support. Julian died in our arms a little while later.’

Daily Mail Australia contacted both Nepean Private Hospital and the hospital’s parent company Healthscope for comment, but they were unable to respond in time for publication.

Ms Brajkovic said she has shared her painful and incredibly personal story to raise awareness of the danger so that other babies may be saved.

She has started a campaign #1isenough to raise awareness in the medical profession of the dangers of contracting enteroviruses during later pregnancy.

The Brajkovics want other people who have lost babies to get in contact so they can get an idea of how big the problem is. 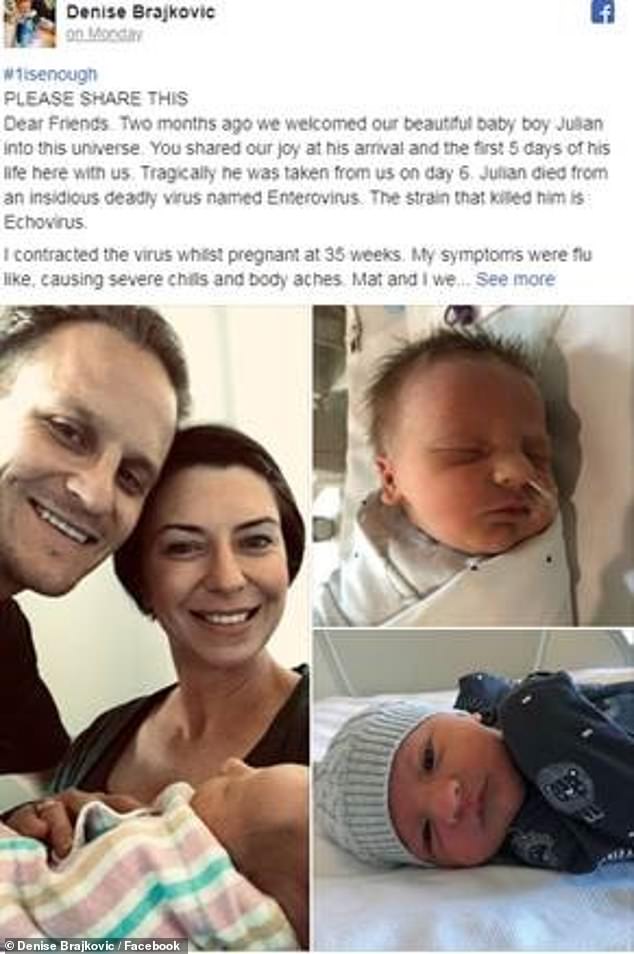 Ms Brajkovic has urged anyone who has been affected by Echovirus 9 or late-stage pregnancy enterovirus infections to contact her, to better raise awareness of the deadly danger

‘Losing one baby every two years (which is only what we know of) hasn’t spurred on any research or awareness,’ she told Daily Mail Australia.

‘Pregnant woman get told to not eat shellfish, soft cheese, drink alcohol, getting the whooping cough vaccine. Not at any point do they tell you ‘hey, if you present with these type of flu like symptoms you could be infected with Enterovirus and it kills your baby’. They don’t test for it,’ she said.

Ms Brajkovic also called for women in their third trimester to limit their contact in public places.

‘I contracted [the virus] from a shopping centre … Wash your hands more often,’ she said.

Ms Brajkovic called on anybody affected by the virus to contact her and posted her story on Facebook.

‘We need you. Baby Julian Brajkovic and all the other babies that died from this evil virus need you,’ she wrote.

Enterovirus is a genus of virus that can be responsible for a number of human diseases.

The name is derived from ‘enteric’ meaning intestinal – which is where the viruses reside.

The virus is found in the saliva, mucous, and stool of an infected person.

Enteroviral infections have a great range in presentation and seriousness.

The symptoms can range from minor rashes, colds, or blurred vision through to presentation of diseases such as Hand, foot and mouth disease, Polio-like syndrome, and Encephalitis.

Echovirus is a type of enterovirus.

In adults the immune system is usually able to fight off the disease.

Babies do not have a developed immune system but can inherit immunity from the mother, however, only if they are in the womb long enough to do so.

Treatment for infection is mainly supportive, such as pain relief, while the immune system fights the virus.

The best way to avoid infection is to practice good hygiene such as washing your hands regularly.