By Tom Cotterill For Mailonline

A starving German Shepherd, so horrifically neglected and emaciated that it was mistaken for a fox, has been rescued after being found scavenging for food.

The heartbreaking pictures of the starving pooch were shared by animal rescuers, after it was found rummaged through litter in Sheerness, Kent, on Wednesday.

Swale Borough Council Stray Dog Service said the female pet, called Bluebell, was malnourished, had uncut claws and fur loss across its back and face, adding it had ‘a nasty looking mammary tumour.’

A hunt has now been launched by authorities to find the owners of the German Shepherd amid fears it had been ‘seriously neglected’ after it emerged the animal had been chipped – but not reported missing.

Heartbreaking images showed, what some thought, was a fox scavenging for food through litter bags on Sheerness, in Kent 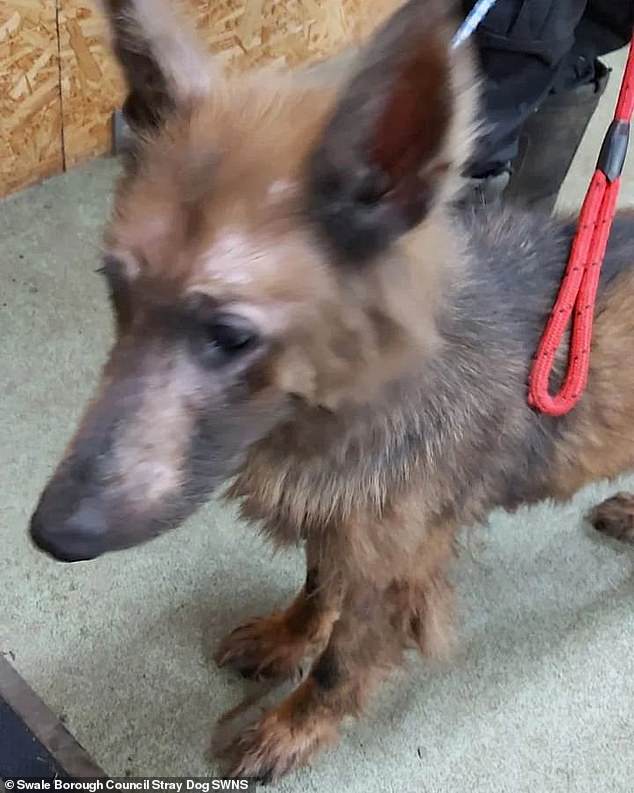 A member of the stray dog team said: ‘This little one has now been collected and is winging her way to the kennels.

‘We can confirm she’s a German Shepherd, not a fox and her name is Bluebell.

‘She’s chipped and this will be investigated further tomorrow, though she isn’t registered as lost or missing.

‘For now, she’ll be given some tea and a warm bed before seeing the vet in the morning.

‘This poor female German Shepherd type, has been found eating out of some black sacks down Jefferson Road, Sheerness.

‘Based on the pictures we’ve received, the poor love has obviously suffered some pretty serious neglect and has been left to fend for herself.

‘Unless their is an underlying medical condition, this is animal neglect.

‘Our officer is racing over to collect her and once we have more information, our post will be updated.’ 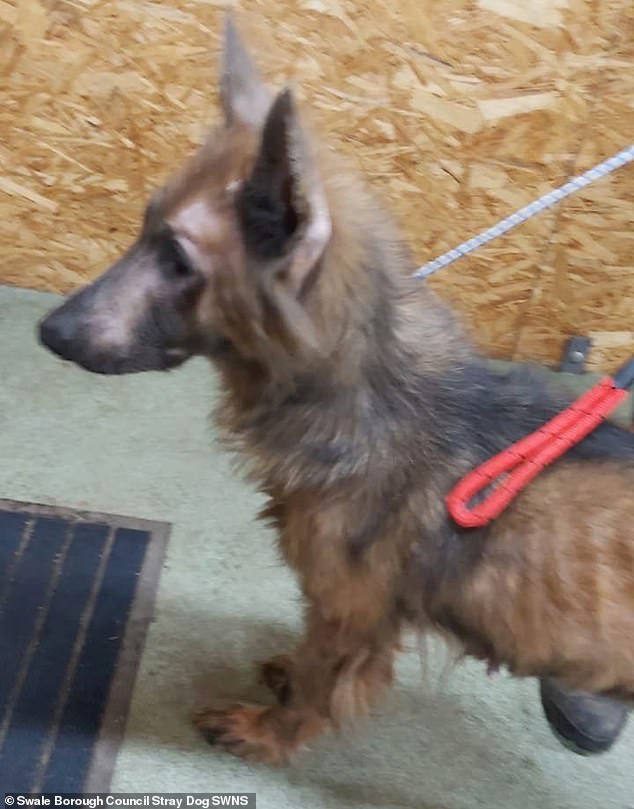 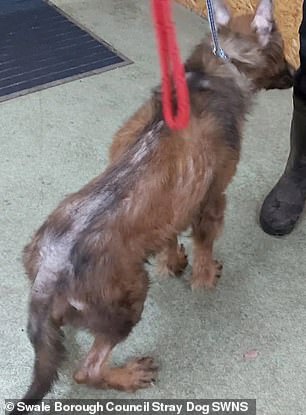 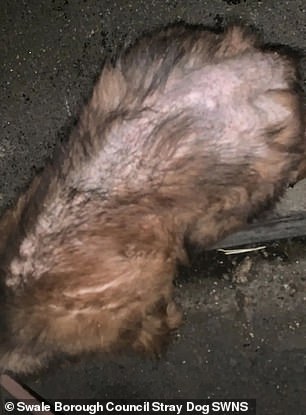 The animal was in an horrific condition, underweight and with fur missing from its legs, back and face. It was so neglected, its bones could clearly be seen showing through its skin (right)

One person said: ‘Do NOT give back to owner. Poor dog. They don’t deserve this animal.’

Another added: ‘Poor little darling, that’s taken a while to get into that state* Wishing her all the best and quick healing* Thank you for saving her*’

A couple of hours after first announcing the rescue, the stray dog team continued their appeal to speak to anyone who recognises the pup.

They added: ‘Following on from our previous post regarding Bluebell, here are some additional photos which show her breed and the extent of her neglect.

‘As well as substantial hair loss, she’s also underweight, has long nails and a nasty looking mammary tumour which will need investigation.

‘We’ll be chasing her chip tomorrow, but she hasn’t been marked as missing or stolen.

‘If you’re the owner and there’s a genuine reason behind her condition, please reach out.’