A man has been accused of putting a child at risk after he was filmed pushing a young girl on a swing on an eighth-floor balcony.

In a shocking video filmed in Puerto Rico, the man is seen pushing the young girl on the swing 80ft above the pavement with no safety harness.

The 12-second video was posted on Twitter by Jonathan Padilla on Saturday and one Reddit user said the footage caused a ‘dropping feeling’ in their stomach. 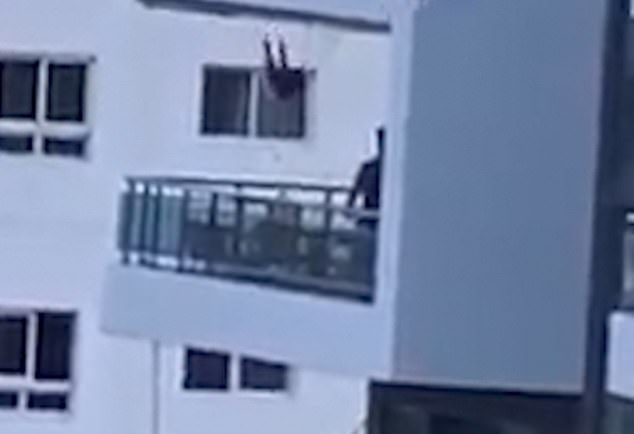 She appears to swing over the edge of the balcony before returning, reaching a near horizontal angle

The man pushes the young girl wearing a pink T-shirt high into the air on his apartment balcony.

She appears to swing over the edge of the balcony, tipping backwards as her feet fly towards the balcony above.

The video is caption ‘Enserio?’ with an arrow pointing at the swing, translating to ‘Really?’ in English.

In the apartment below, a man relaxes on his balcony as his washing dries, seemingly unaware of what is happening above him. 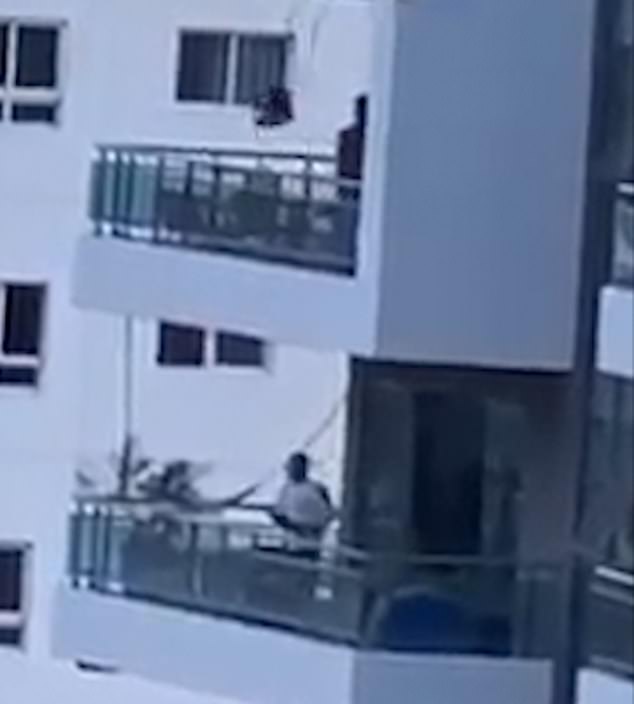 Mr Padilla, a journalist for the Mexican Herald, shared the video on May 16 as Puerto Ricans face a coronavirus lockdown and curfew.

Parks are closed so many children in apartments have little outside space to play in.

Mr Padilla said: ‘This happened. A man swung his underage daughter on the balcony of his apartment during this coronavirus quarantine.’

The man’s actions were criticised widely on Reddit, with one person saying the video caused the same feeling as when riding a rollercoaster.

Another user said: ‘Just because you cannot go to the park does not mean you can risk your child’s life.’

Others pointed out the father could have installed the swing inside the flat.

‘All you need is an over the door pull up bar, and this swing could be inside the apartment.’ 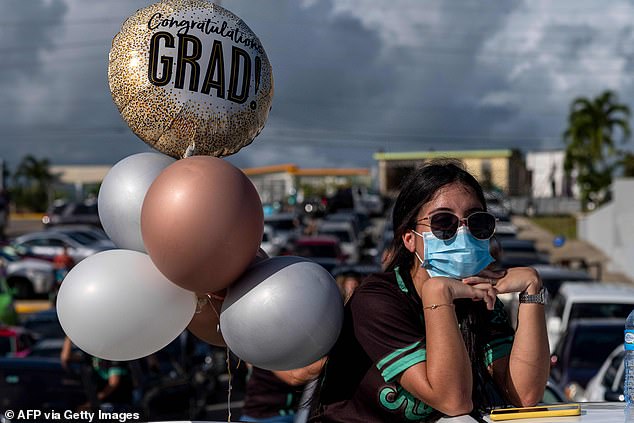 Puerto Rico became one of the first US jurisdictions to shutdown most of the economy, closing beaches and banning public gathering from March 16 but is currently easing restrictions. Pictured: A student from the Ramon Power Y Giralt High School wears a face mask during a symbolic graduation from their cars to maintain social distance in Las Piedras on May 13

Puerto Rico is currently easing restrictions on the coronavirus lockdown after shutting down most of the economy and banning public gathering from March 16.

The country is still enforcing a 7pm-5am curfew on going outside but people are allowed to leave their homes to exercise at any time of the day during non-curfew hours.