Heather and Terry Dubrow’s fancy kitchen has a champagne fridge

Bravo has offered viewers a look into many a housewife’s kitche, but one of the most impressive ones belongs to Heather Dubrow.

The former Real Housewives of Orange County star, who is married to Botched doctor Terry Dubrow, recently showed off her family’s kitchen for an episode of Today’s Crazy Kitchens — and the peak inside her home is certainly envy-inducing.

In a five-minute video, the 49-year-old gave viewers a tour of the custom-built room, which features pricey, state-of-the-art appliances, a mind-boggling champagne fridge, and a second, smaller kitchen that she refers to as the ‘pantry’.

Wow! Heather Dubrow showed off her incredible kitchen in a new video 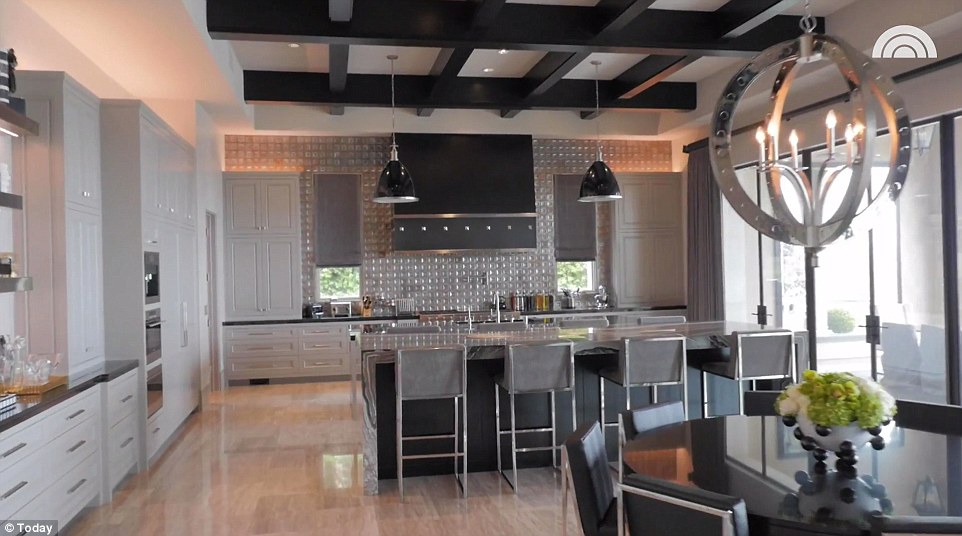 Stunning! The 49-year-old former Real Housewives of Orange County star said that her kitchen is ‘the heart of where my family lives’ 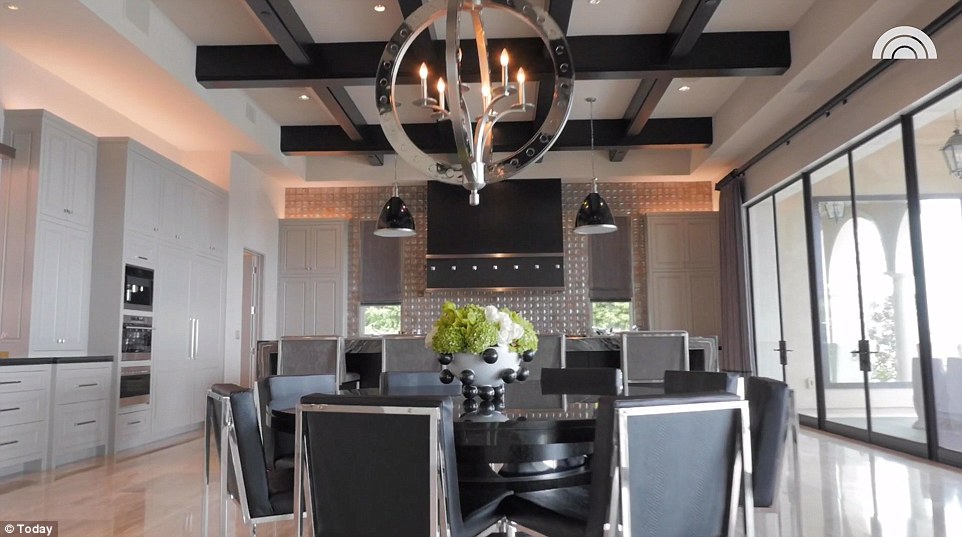 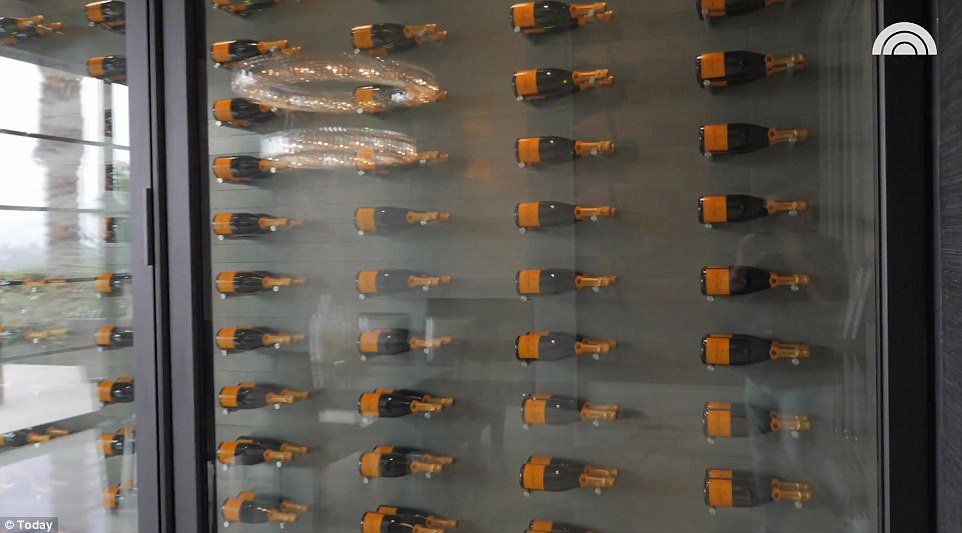 Who needs that much? The biggest jaw-dropper is the champagne fridge, which can hold 234 bottles

In the video, Heather says that her kitchen is ‘the heart of where my family lives’, and a look inside makes it immediately obvious why they spend so much time there. 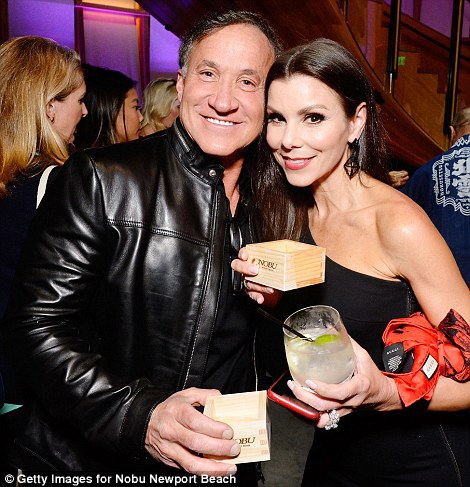 The kitchen is beautiful and spacious, with a full wall of glass doors letting in natural light.

There’s also an island for cooking, marble counter tops, and a large TV.

But likely the biggest jaw-dropper is the champagne fridge, which can hold 234 bottles — all of Moet Chandon.

In addition to that supply, she also keeps a few bottles ready in the regular fridge, which is hidden behind white doors that match the cabinets.

‘I feel like angels should sing a little bit as I open this,’ she said, swinging the doors open to reveal the pristine shelves inside.

Fruit and veggies are stored in class bowls, and even juice has been emptied out into uniform containers, as Heather says how much she likes ‘everything in its place’. 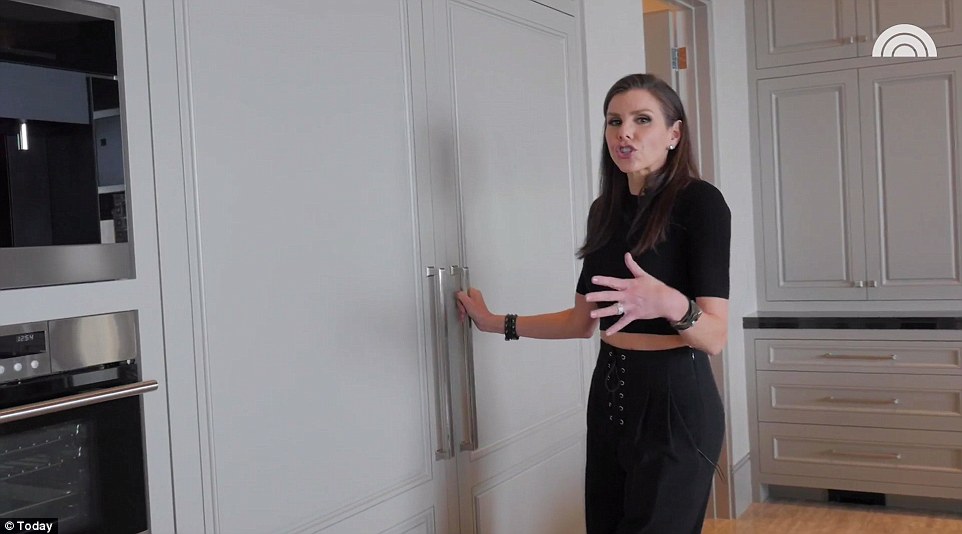 The food: She showed off the fridge, which is hidden behind white doors that match the cabinets 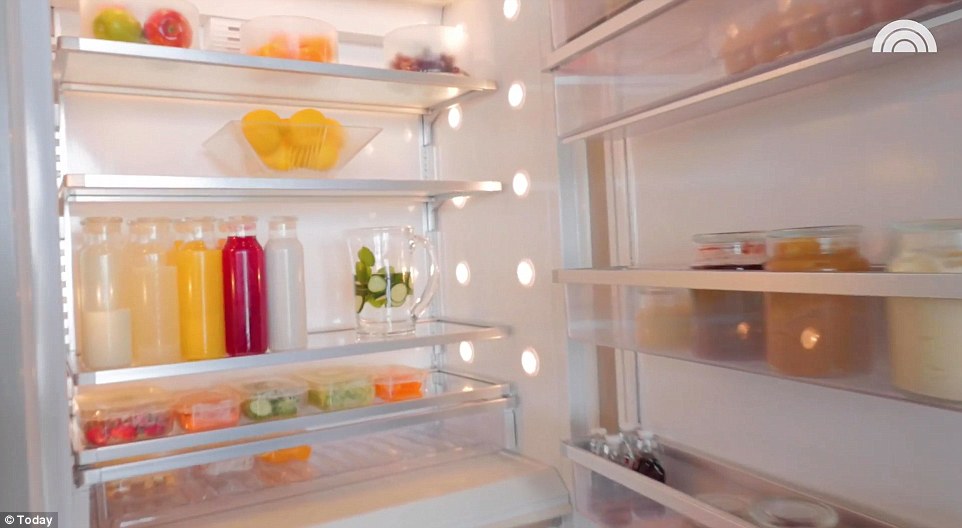 So organized: All the fruits, vegetables, and juices inside are stored in clear glass containers 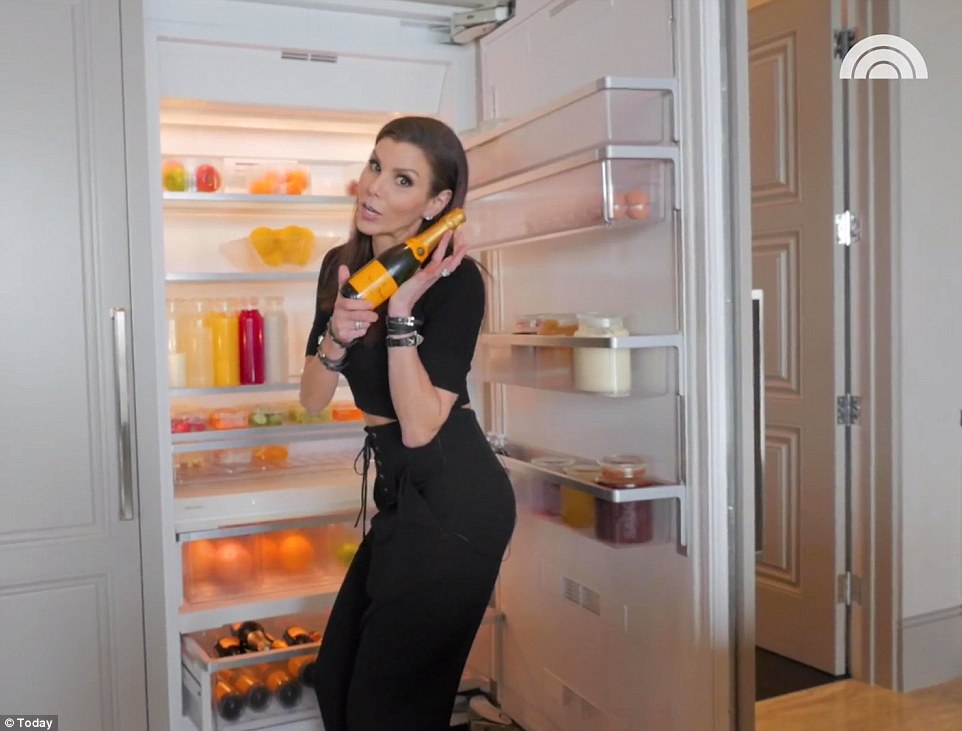 But wait, there’s more! She even has more Moet Chandon in the fridge

‘You might think, “Hey Heather, you have four kids and you live like that?” Well, I may have one dirty little secret,’ she says, before revealing that off the side of the huge kitchen is actually… another smaller kitchen.

Though they call this room the ‘pantry,’ it’s really about as big as many people’s kitchens.

Inside, there are more cabinets, a toaster oven, and yet another fridge. That fridge is packed with a whole lot more food, including pudding cups, yogurt, bread, and sauces — but even all that is pretty neatly arranged.

There are also things like sugar, flour, and honey, all emptied out into 60 matching glass jars. Everything here is labeled and organized, with snacks tucked into coordinated baskets.

In fact, the organization is so meticulous that even the cookies have been taken out of their box and stacked artfully in a symmetrical design inside a glass jar, which Heather said was inspired by how Khloe Kardashian has set up her kitchen. 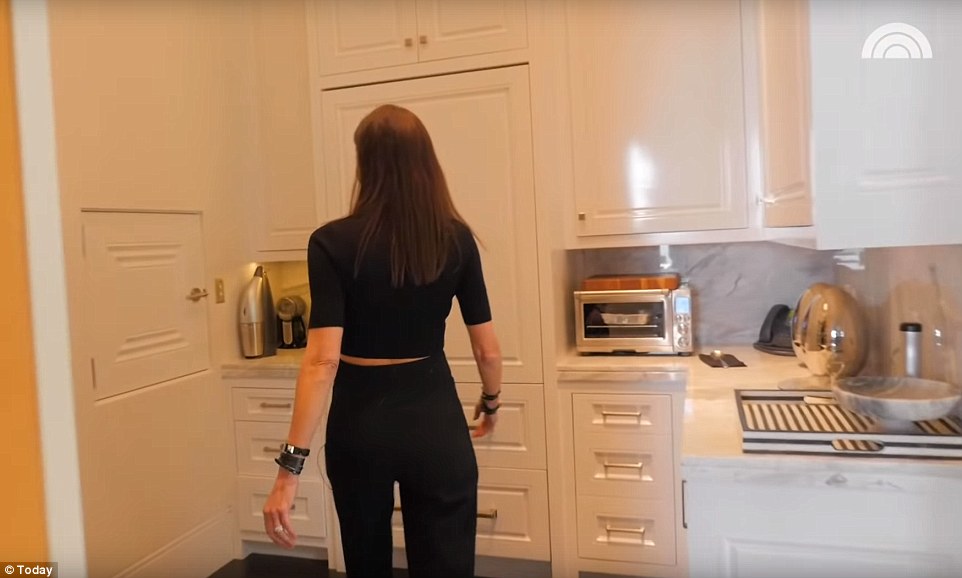 A second kitchen? She moves on to her ‘pantry’ which is really just a smaller kitchen 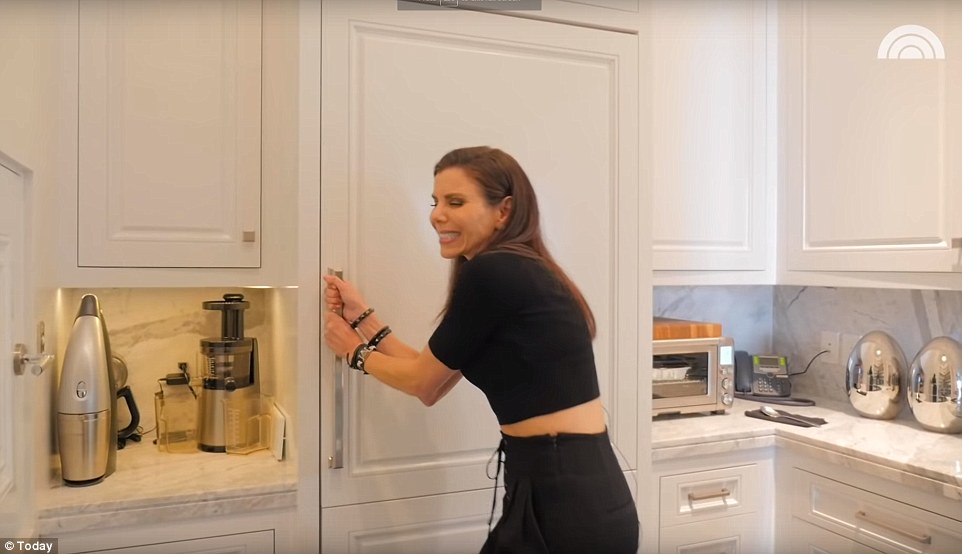 So much storage! Inside the pantry is a toaster oven, more drawers and cabinets, and another fridge 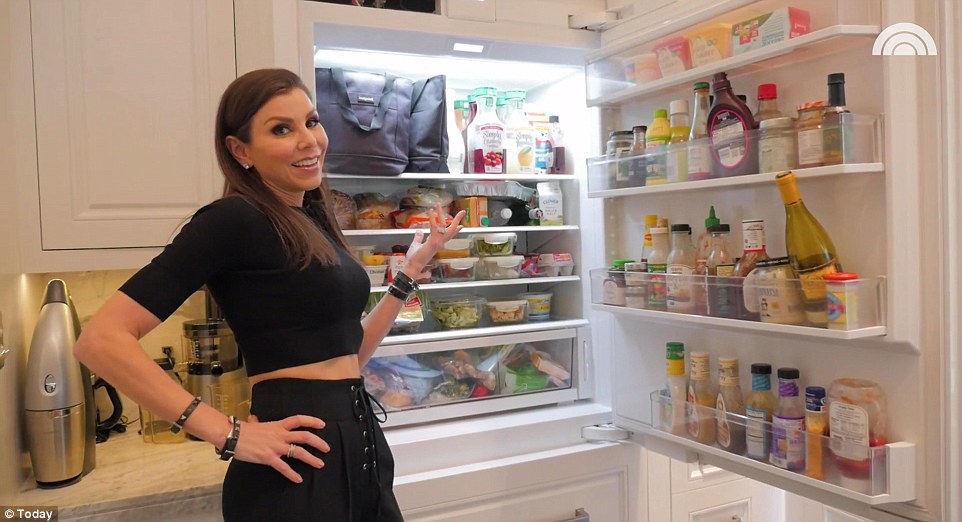 When can we move in? That fridge has much more in it, but it’s still pretty neat 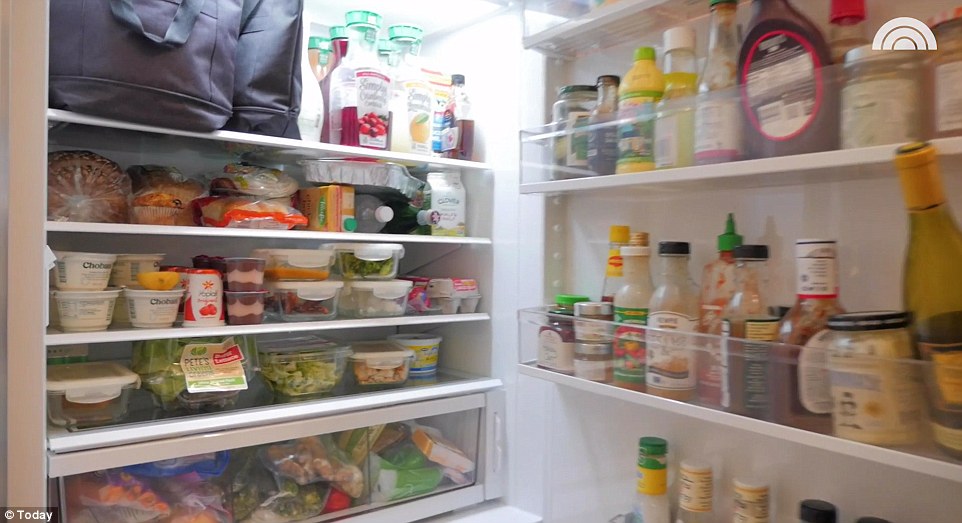 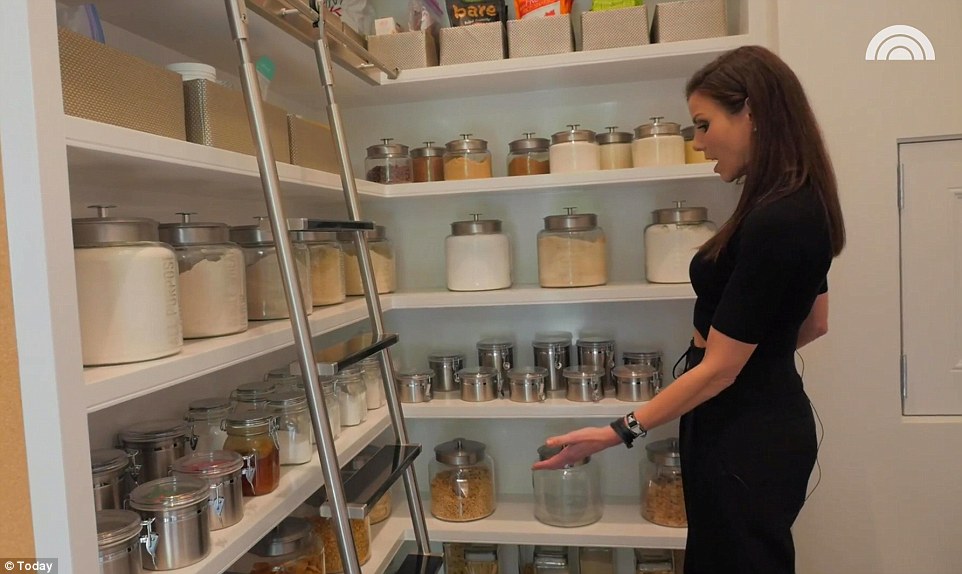 Neat and orderly: All of the dry goods are also in matching glass jars, wile other things are stored in matching metallic canisters

‘When I design a house, it’s about being fabulous and doing things to make your life easier.

To that end, she had a dumbwaiter installed in the pantry, which is essentially a special elevator for her groceries.

It allows her and her husband to drive into their garage and load all of their groceries inside a cabinet.

They then press a button, and the groceries are transported directly to the kitchen, so they don’t have to carry them — an excess luxury, to be sure, but one that many people would love to have in their homes.

Heather also showed off her many, many cabinets, which are all impeccable and perfectly organized.

There are refrigerated drawers filled with glass bottles of soda, as well as warming drawers for hot foods. 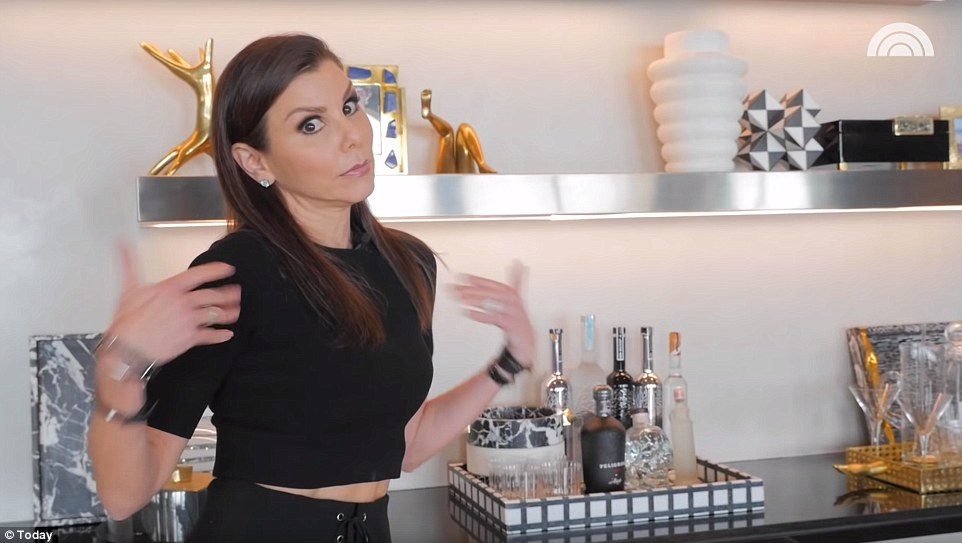 Enormous: She also walked viewers through all of the drawers and cabinets, and showed off hard liquor on the counter tops 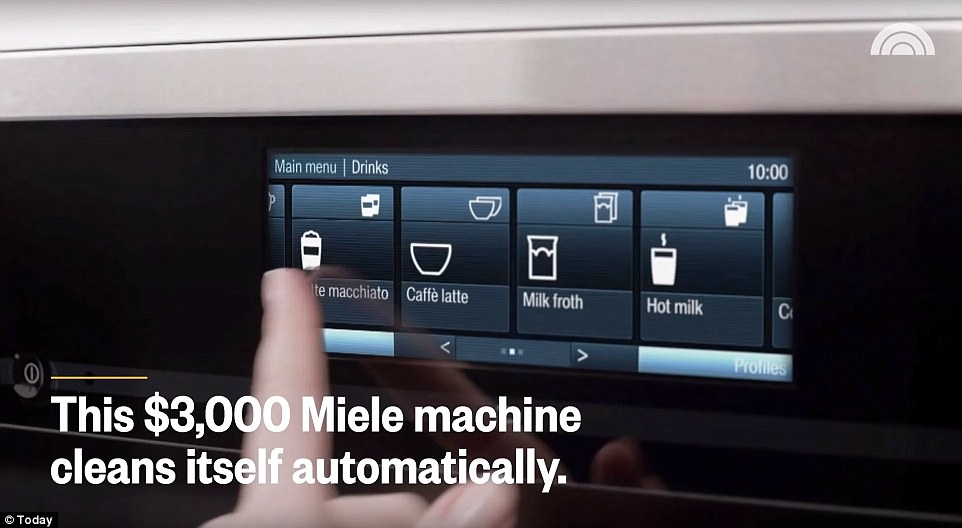 Morning joe: She doesn’t drink coffee, but her family has a $3,000 coffee maker 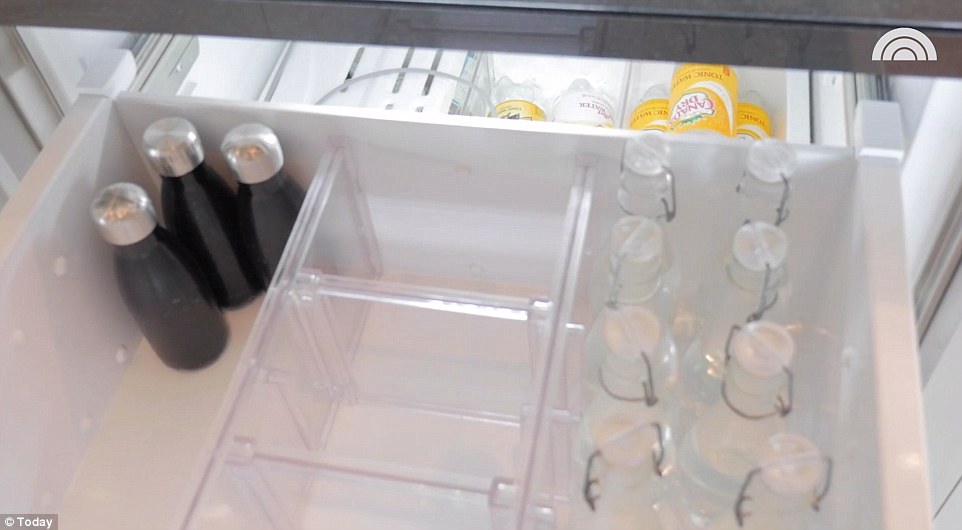 Very neat: Soda is stored in glass bottles inside a refrigerated drawer 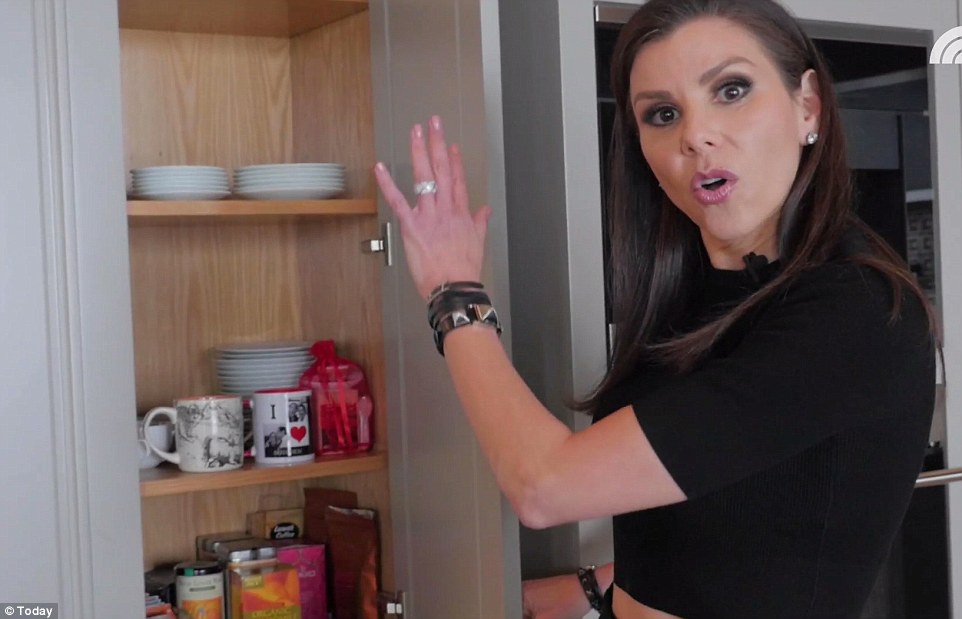 Sip sip: All of her ‘tea things’ like tea, cups, and saucers are in one cabinet

There are craft drawers for her kids, a tea cabinet (complete with mugs and saucers), and a very high-tech coffee maker.

The coffee maker is a $3,000 Miele machine with a digital display, where the user can pick the type of coffee (including espresso, a cappuccino, or a latte). It also cleans itself.

‘It’s very high-tech and I don;’t drink coffee so I don’t really know how to use that, but it is very cool,’ she says.

She next shows off a steam oven and a microwave, before going onto the second table in her kitchen, the eating island.

‘What’s really special about it is this,’ she says, gesturing to a metal grate that runs down the middle. The grate lifts out, and underneath is a deep sink. When entertaining, she will fill the sink with ice and champagne, caviar, and crudites for her guests. 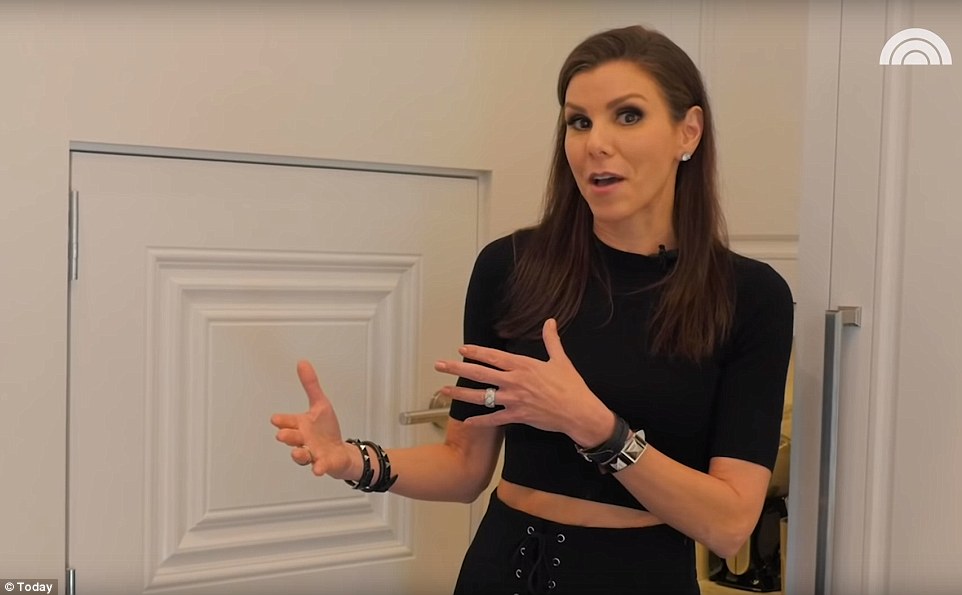 Very high-tech: She also showed off the dumbwaiter she had installed 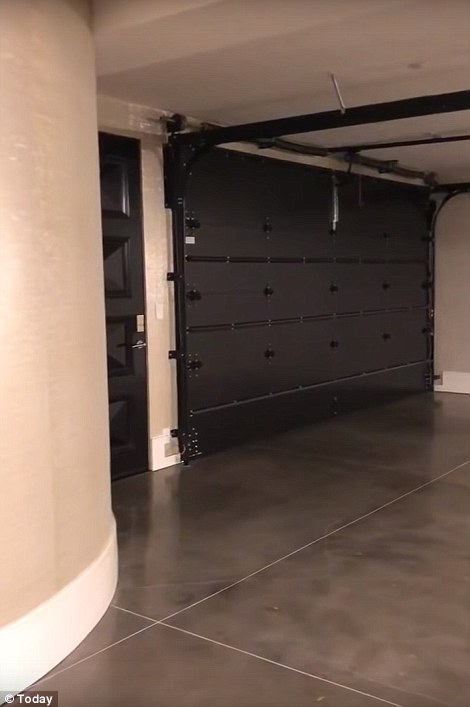 Like magic! She and Terry simply unload groceries in the garage and put them behind a door. They then push a button and the bags are transported to the kitchen 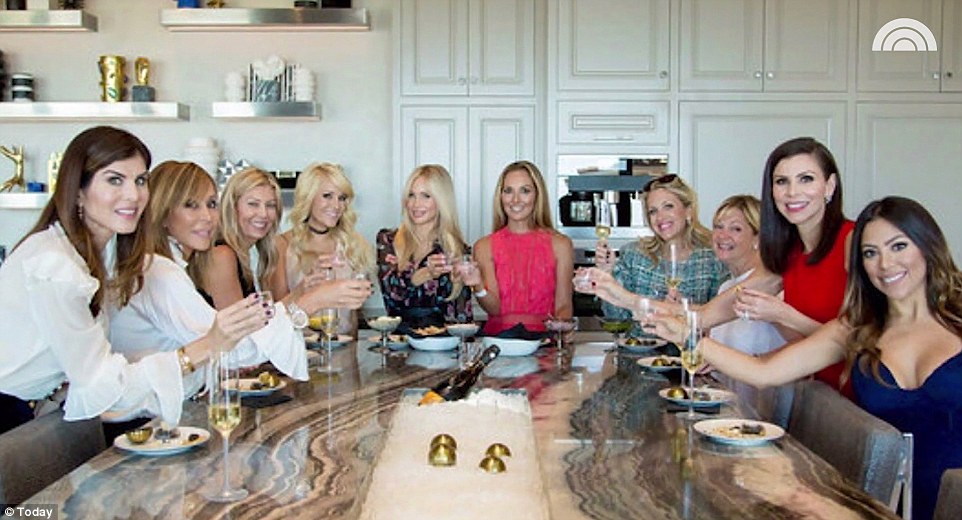 So fancy! At the high-top table, a sink down the center can be filled with ice so that she can serve champagne and caviar when she entertains 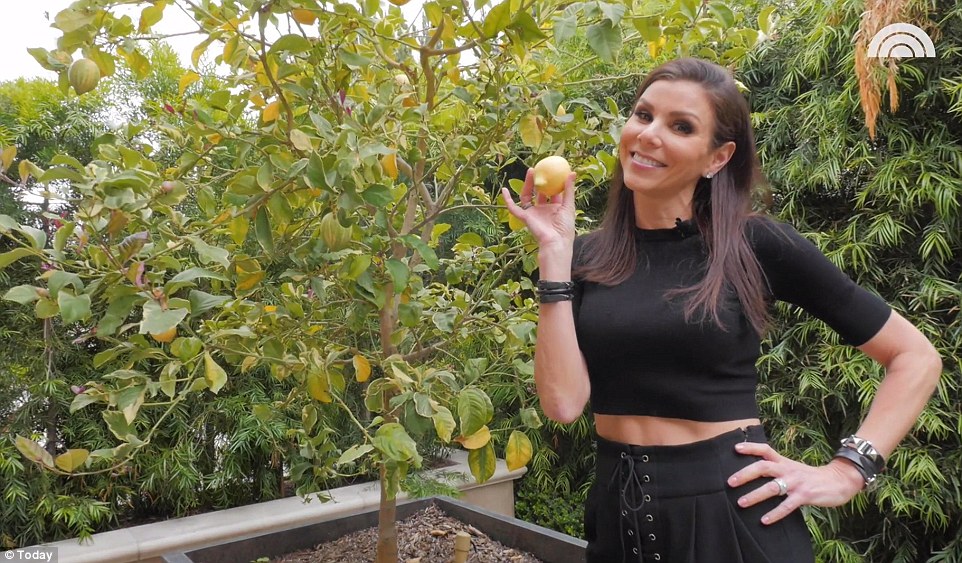 So fresh! She also has a garden directly outside where she grows fruit, veggies, and spices 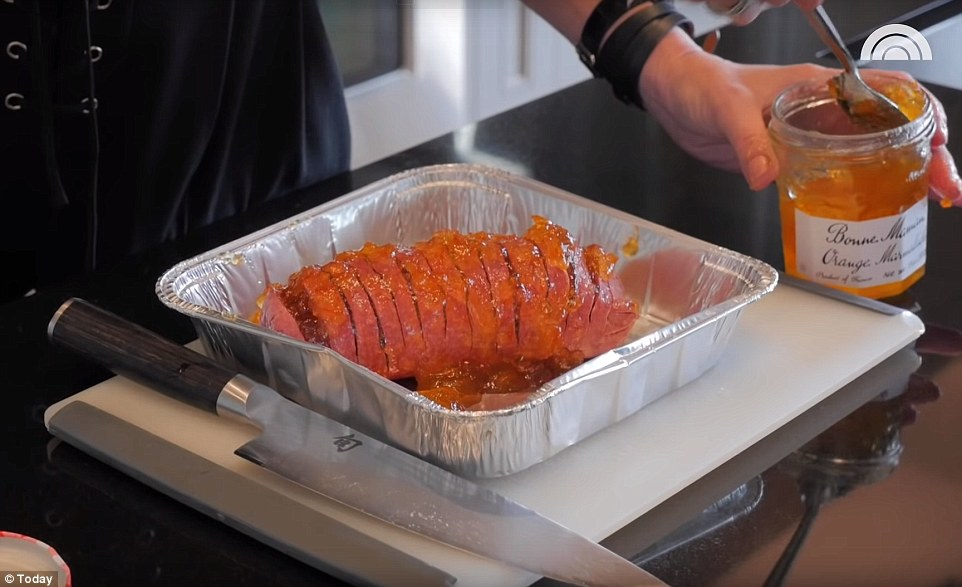 And she cooks, too! She demonstrated one of her go-to recipes, which involves slicing a salami and slathering it in orange marmalade 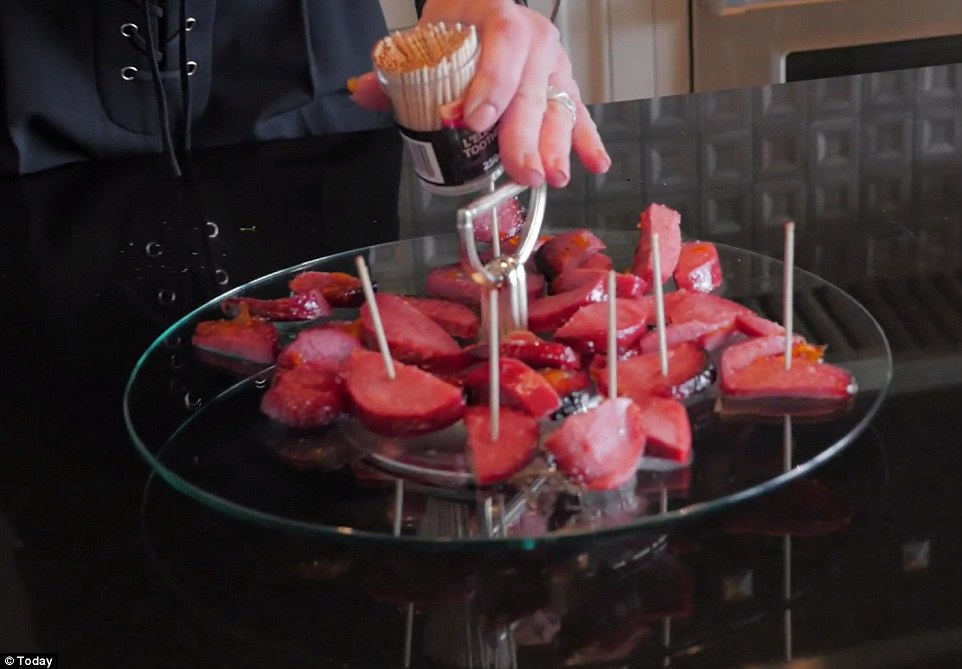 The finished product: She said her kids love the salami dish

‘You know those ads you see on Instagram, or late at night for those crazy, like, food dehydrator, or air fryer, or all this stuff — you know who buys that stuff? Me!’ she says, showing off a pair of scissors with a built-in mini cutting board.

She also takes a moment to show off her cooking skills with a dish she makes for her family.

‘If I really want to show my kids how much I love them I make the salami,’ she says.

To do this, she cuts a Hebrew National salami, making slices that don’t go all the way through. She fills the gaps with orange marmalade, and bakes it at 350 degrees for an hour.

To serve it, she cuts it up and adds toothpicks, and says her kids go crazy for it.

Finally, directly outside the kitchen is her ‘edible garden,’ where she grows tomatoes, lemons, and mint for cooking.