Holidaymakers headed overseas for their summer break had to leave their bags behind at Heathrow Airport yesterday following more problem with luggage handling systems.

Many have now arrived at their destinations but are still anxiously awaiting to see whether their clothes follow them on holiday.

Passengers including former comedian Eddie Izzard tweeted their frustration and posted pictures of cases piling up in the luggage hall.

One posted a video of staff looking at mounting piles of cases with the maudlin caption ‘Computer says no.’

Others said they had waited more than an hour for bags to arrive on the carousel so they could head home.

A Heathrow spokesman said: ‘We apologise for disruption experienced as a result of an issue with our baggage system in Terminal 2 yesterday evening.

‘This means passengers departing Terminal 2 may have travelled without their hold bags. 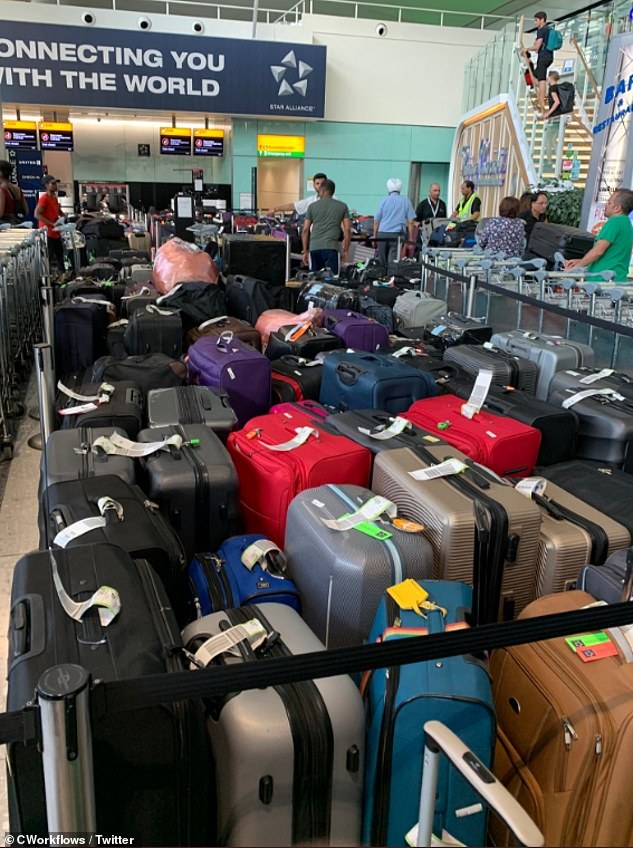 ‘We are working closely with our airline partners to reunite passengers with their luggage as soon as possible and those affected should contact their airlines for more information.’

Union activists are planning a secret summer party for striking Heathrow staff while they inflict misery on holidaymakers.

Unite has threatened to shut down the airport on Friday and Saturday on one of the busiest weekends of the year.

More than 4,000 workers are expected to walk out in a protest over pay, causing chaos for families heading abroad.

While this is happening, many workers – including staff meant to be manning the security gates at Heathrow – are expected to be drinking beer and eating sausages at all-day barbecue and bar just outside the airport’s southern perimeter.

Furious holidaymakers made their flights but were left non-plussed by the ‘poor’ communication.

Comedian Eddie Izzard was among those in the queue, tweeting: ‘I hope BA can get this moving soon as passengers have been waiting a long time now.’

Heathrow’s Terminal 5 is the newest of the airport’s terminals and opened in 2008 at the cost of £4billion.

It comes after thousands of passengers suffered chaos at the Terminal Five bag drop on Friday when queues of up to two hours saw them miss their flight.

The problems happened one day before the school holidays start and amid threats of a summer of strike action that could ruin holidaymakers’ flying plans.

Photographs later emerged of security staff looking over hundreds of bags which were lined up behind screens inside the terminal building.