A search by police in Florida that has lasted for a month ramped up in intensity on Friday with officers searching swampland armed with rifles in an area where it is believed Brian Laundrie may be hiding.

The search for Laundrie in the swampland began in September, but for the first time police crime scene tape was erected around the site, an area known as Carlton Reserve.

The reserve is where the 23-year-old fugitive is believed to have begun a solo hike, according to Laundrie’s parents.

FBI and local search and rescue teams have been combing the swampy, alligator-infested region near the Laundrie family’s home in North Port, Florida in hopes of finding him. 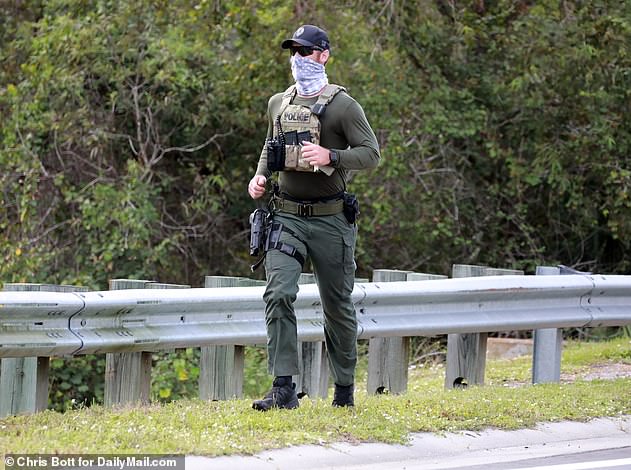 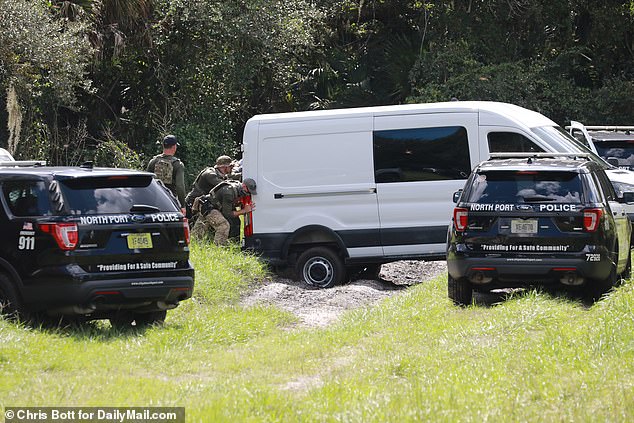 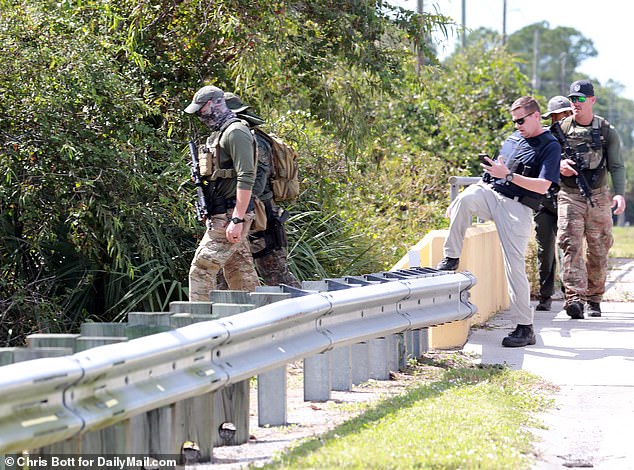 The search began in an area known as Carlton Reserve where the 23-year-old fugitive is believed to have begun a solo hike, according to Laundrie’s parents. 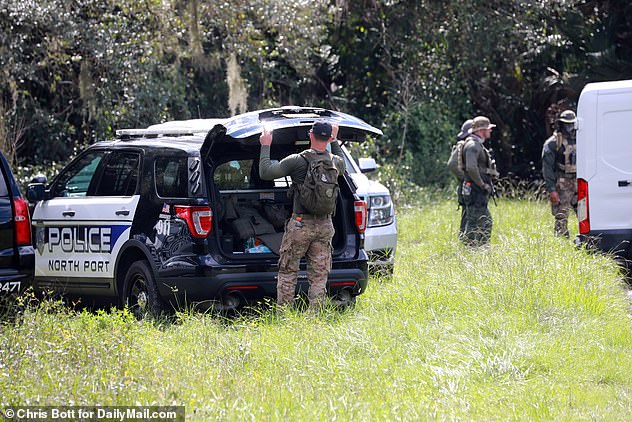 The FBI and local search and rescue teams have been combing a swampy, alligator-infested region near the Laundrie family’s home in North Port, Florida 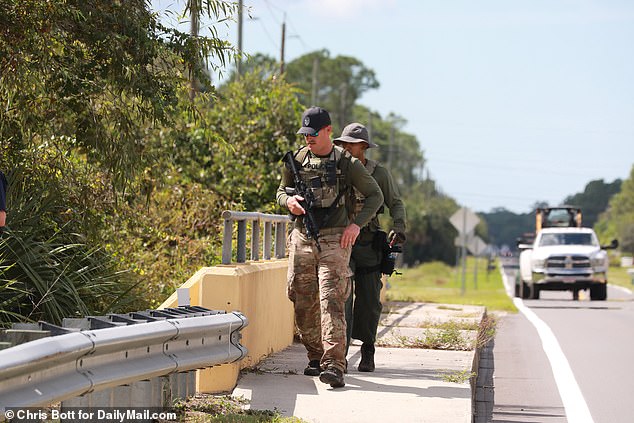 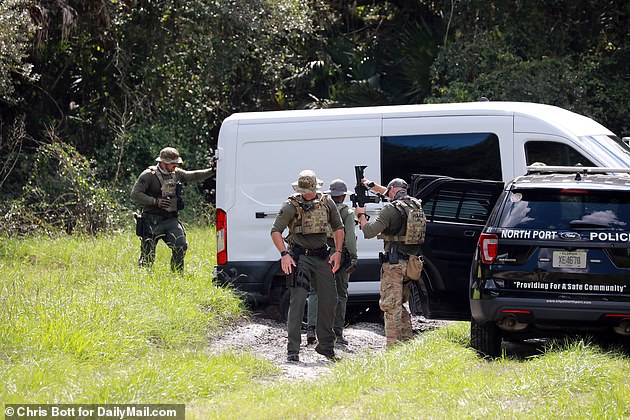 At one stage, one of the vans belonging to police appeared to get stuck in the mud 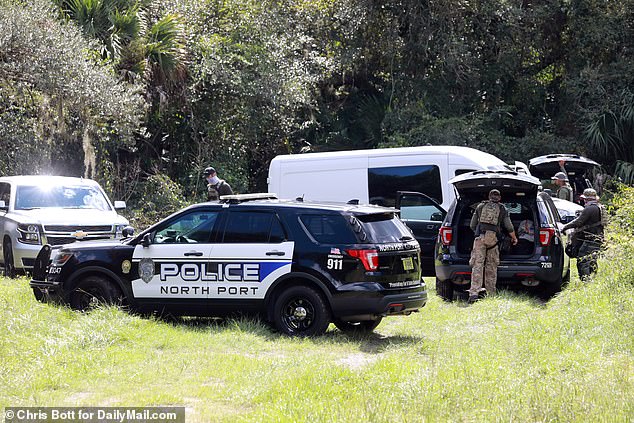 The search for Laundrie has continued for more than one month 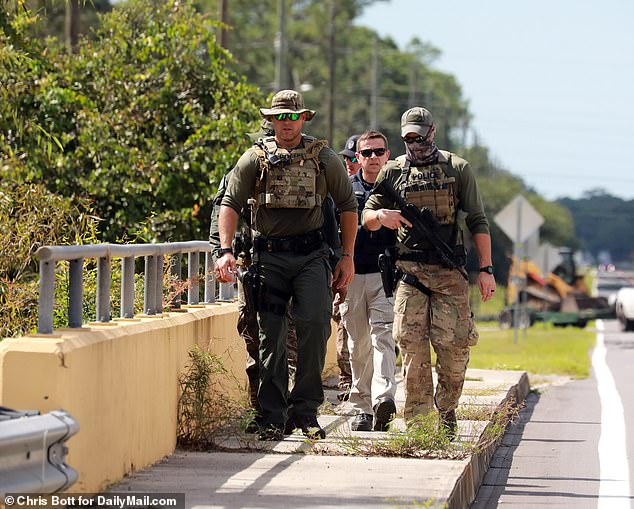 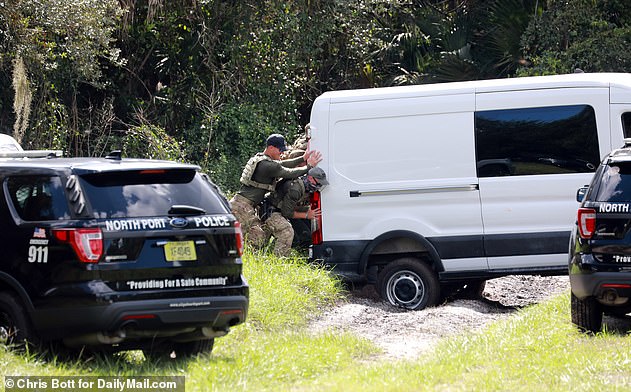 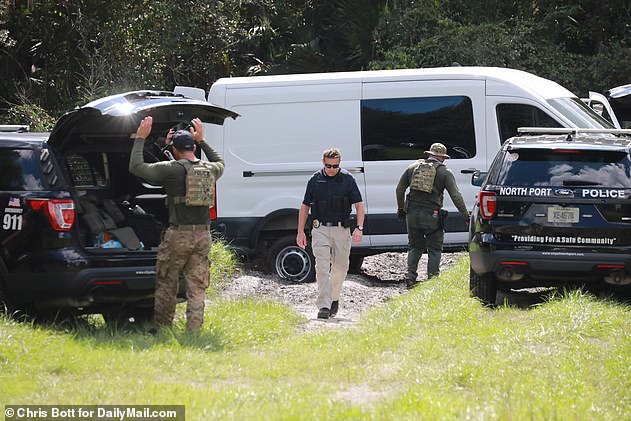 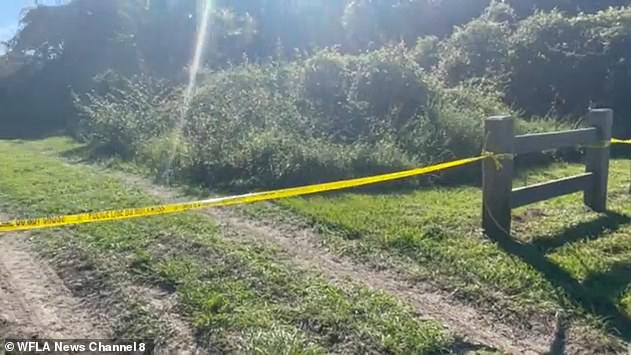 For the first time on Friday, police crime scene tape was erected around the site 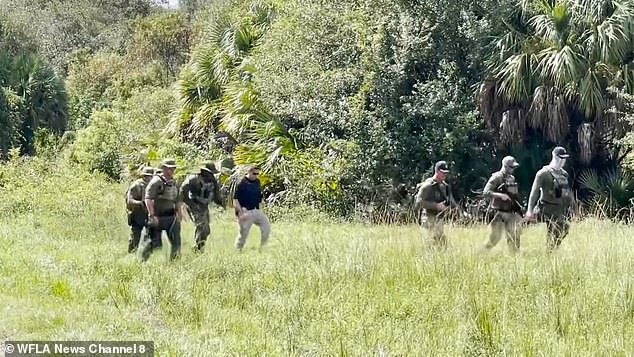 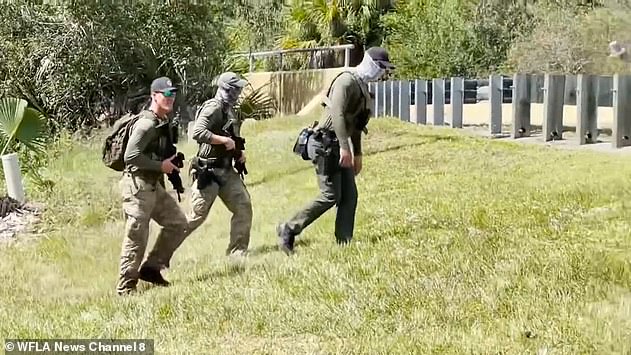 During the afternoon, officers were seen carrying large rifles into a wooded area of the reserve

Officers were seen carrying rifles into a wooded area with North Port Police Department telling one eyewitness that it was all part of a ‘training and searching’ activity that also involved the FBI.

Also on Friday, Chris Laundrie could be seen setting up a new Ring doorbell camera to the front porch of his home. 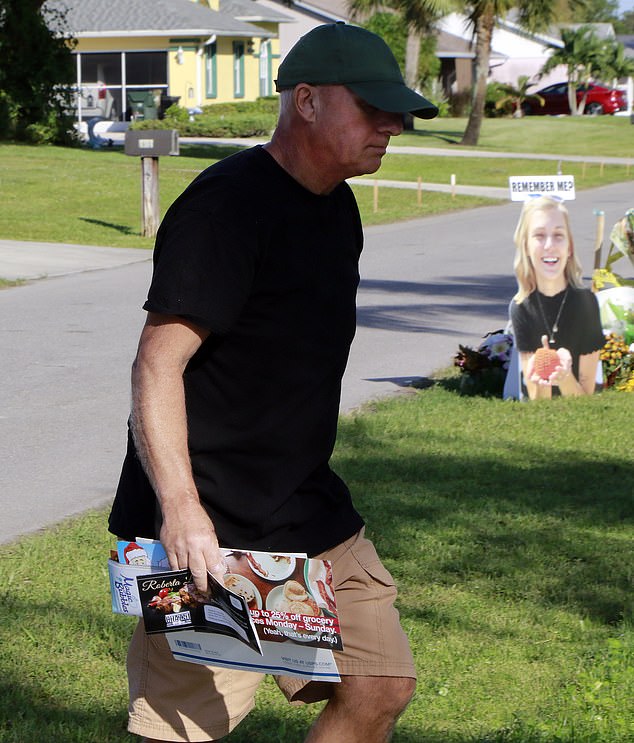 Brian Laundrie’s father, Chris, would be seen collecting the mail from outside his home Friday 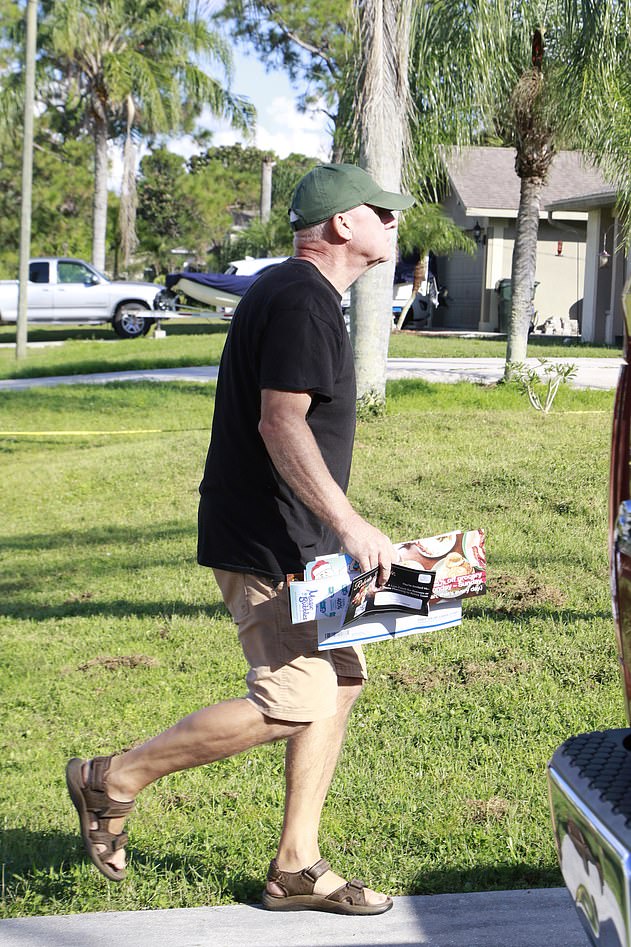 Laundrie decided to fit the device following disturbances earlier in the week when supposed protesters attempted to confront Chris and his wife Roberta by banging on the door of their home, demanding that the couple ‘speak up soon’.

Last weekend, some people also demonstrated outside of the couple’s home in the hope the Laundrie’s might speak.

On Thursday, federal and local authorities were aided by the services of a cadaver dog, K9 Diesel, a cadaver dog belonging to the Pasco County Sheriff’s Office, whose headquarters sit about a 90-minute drive from the search.

A spokesperson for the sheriff’s office said that the agency is the only one with a dog trained to sniff out human remains.

K9 Diesel is a three-year-old Labrador Retriever who is certified in human remains detection. He began working for PCSO in July 2019. 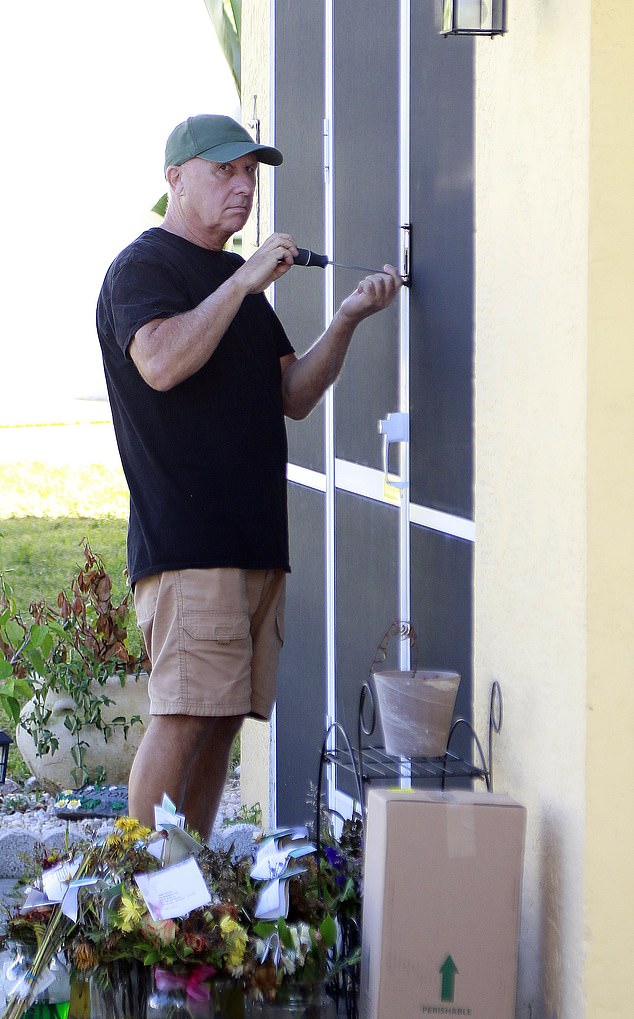 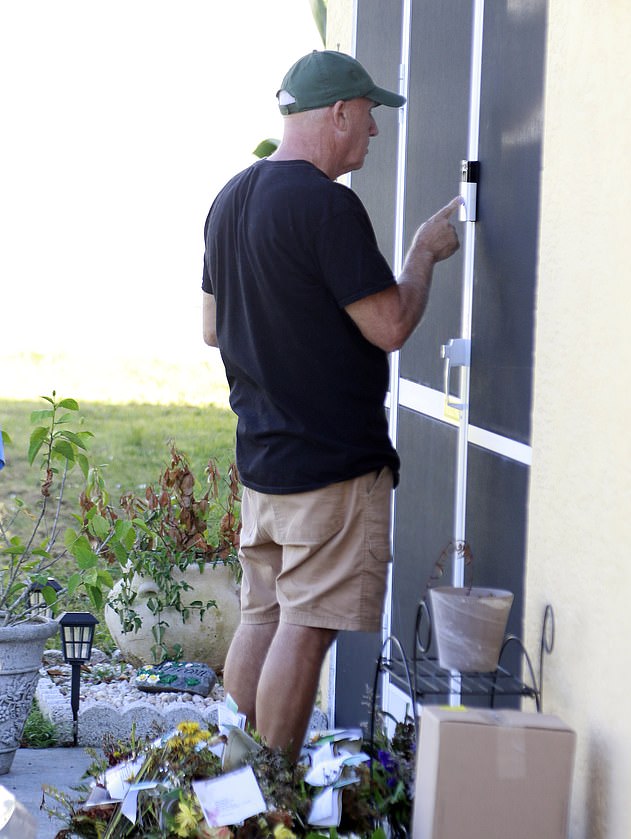 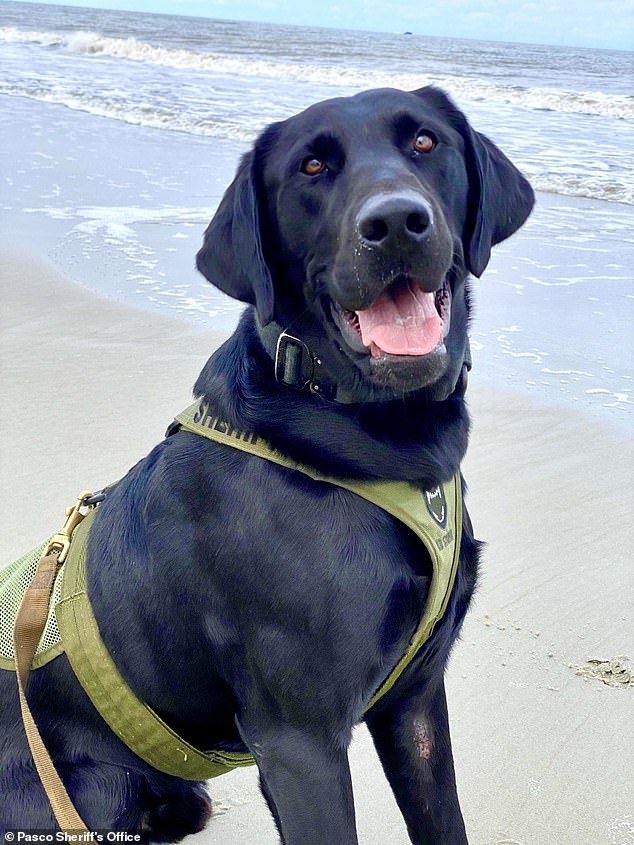 K9 Diesel, a cadaver dog provided by the Pasco County Sheriff’s Office, will aid in the search for Brian Laundrie 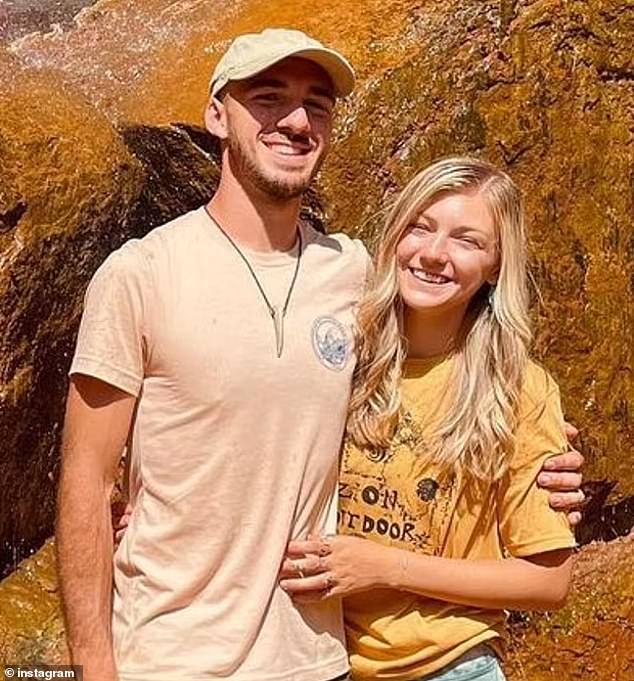 FBI and local search and rescue teams have been combing a swampy, alligator-infested region near the Laundrie family’s home in North Port, Florida in hopes of finding Laundrie (seen left with slain fiancee Gabby Petito) 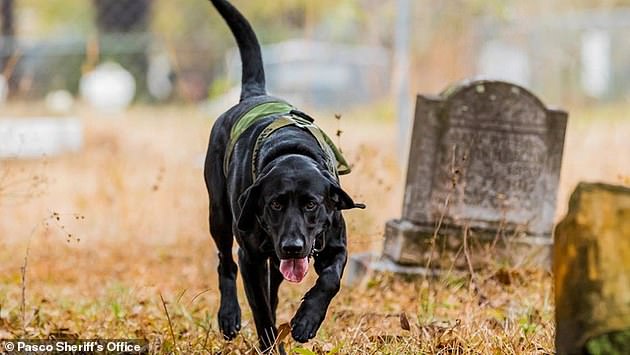 K9 Diesel is a three-year-old Labrador Retriever who is certified in human remains detection. He began working for PCSO in July 2019 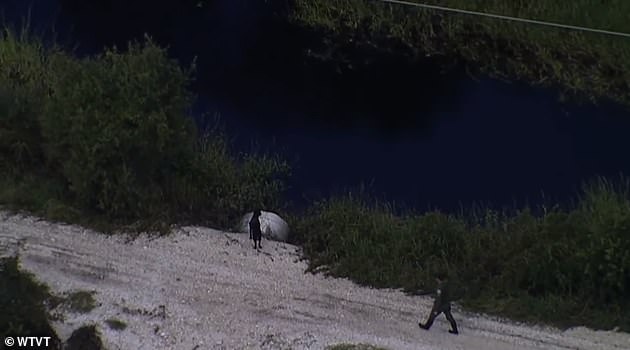 K9 Diesel is the only K9 integrated with PSO’s Forensics Unit full time and is one of the only forensics-integrated K9s in the country.

That means that whatever K9 Diesel finds is preserved immediately since there is no need to wait for a forensics team to arrive at the scene to process evidence.

‘We have sent the HRD (human remains detection) K9s a few times and patrol K9s (who are also trained to track those who are missing) a few times,’ a PCSO spokesperson told WFLA-TV.

‘For more insight, we’re one of the only law enforcement agencies in Florida that have HRD K9s in house, so we’re often requested to assist in that aspect across the state.’

Wednesday marked one month since Laundrie’s parents told authorities that they last saw their son alive. Laundrie was reported missing on September 17.

According to his parents, Laundrie went for a hike in the Carlton Reserve area on September 14. 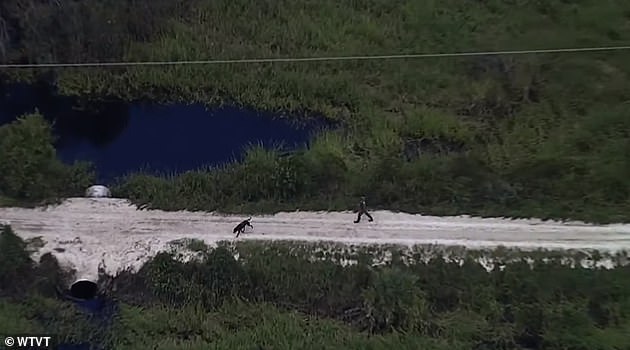 Meanwhile, several law enforcement vehicles were spotted at one of the entrances to Carlton Reserve on Thursday

The day before he went missing, law enforcement officials said they considered him to be a person of interest in the disappearance of Gabby Petito.

On Tuesday, a Wyoming coroner announced the ‘van life’ girl who traveled with Laundrie on a cross-country trip that they documented on social media, died after being strangled.

Petito, 22, died three to four weeks before her body was found September 19 near an undeveloped camping area along the border of Grand Teton National Park in remote northern Wyoming, Teton County Coroner Dr. Brent Blue said in a news conference.

Blue declined to say more about the autopsy or the case overall, saying he was prevented by Wyoming law that limits what coroners can release.

Petito had been on a cross-country trip with Laundrie, visiting Colorado, Utah and other states. She was reported missing September 11 by her parents after she did not respond to calls and texts for several days while the couple visited national parks in the West.

Blue previously classified Petito’s death as a homicide — meaning her death was caused by another person — but had not disclosed how she was killed pending further autopsy results.

A ‘detailed analysis’ led to his conclusion Petito was strangled, Blue said. ‘Nothing is obvious in a case like this,’ he said.

Blue said little more about Petito’s physical condition – including whether she may have been strangled directly by somebody’s hands, a rope or some other item – but noted when asked that she wasn’t pregnant.

The three to four weeks her body was believed to be in the wilderness, however, put her death around the August 27-30 period investigators believe Petito and Laundrie had traveled to the area.

Petito’s case has led to renewed calls for people to pay greater attention to cases involving missing Indigenous women and other people of color, with some commentators describing the intense coverage of her disappearance as ‘missing white woman syndrome.’ 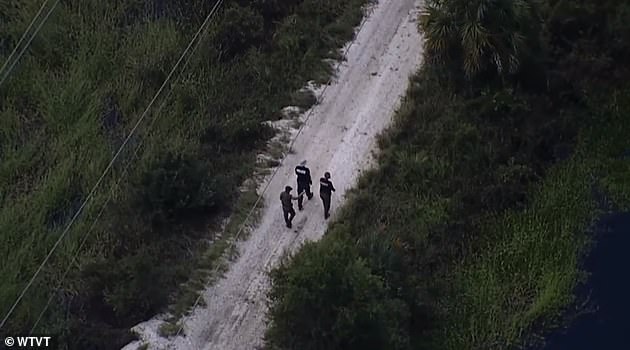 Wednesday marked one month since Laundrie’s parents told authorities that they last saw their son alive. Laundrie was reported missing on September 17

The search for Laundrie has generated a frenzy, with TV personalities like Duane Chapman – known as Dog the Bounty Hunter – and longtime America’s Most Wanted host John Walsh working to track him down.

Petito and Laundrie posted online about their trip in a white Ford Transit van converted into a camper.

They got into a physical altercation on August 12 in Moab, Utah, that led to a police stop, which ended with police deciding to separate the quarreling couple for the night.

No charges were filed, and no serious injuries were reported.

Investigators have searched for Laundrie in Florida and also searched his parents’ home in North Port, about 35 miles south of Sarasota.

Federal officials in Wyoming last month charged Laundrie with unauthorized use of a debit card, alleging he used a Capital One Bank card and someone’s personal identification number to make unauthorized withdrawals or charges worth more than $1,000 during the period in which Petito went missing.

They did not say to whom the card belonged.

Asked about the coroner’s determination, the attorney for the Laundrie family, Steven Bertolino, in a statement noted his client only faces the fraud charge in the case.

‘At this time Brian is still missing and when he is located we will address the fraud charge pending against him,’ Bertolino said.