The events of the past week have been astonishing as Britain has accelerated from trudging along in difficult financial times to full scale Bank of England intervention.

The UK economy doesn’t exist in isolation and much of the rest of the world is also being battered by the inflation storm and dollar strength, but it’s impressive to shoot yourself in the foot so badly that you trigger your own mini-financial crisis.

It tends to pay off if you can keep your head when all about you commentators are losing theirs, so I’ll go easy on the hyperbole and let the list speak for itself: crashing pound, rocketing gilt yields, pension fund collapse fears and mortgage chaos.

Kwasi Kwarteng’s free-wheeling statement contained debt-funded tax cuts and big spending measures in a push for growth, but it came outside of a Budget and with no OBR report

The debt-funded tax cuts of Kwasi Kwarteng’s free-wheeling mini-Budget aren’t solely to blame for the predicament that we are in – the muddled Bank of England over the past year must also shoulder some blame.

It may possibly be the case that Kwasi’s going for growth ideas are the kind of thing that we need to shake Britain out of its post-financial crisis rut, but the problem was the delivery.

To announce such a bombardment of tax cutting and spending outside of a budget, or even an Autumn / Spring Statement, was unorthodox; to do so while funding it with debt and with no OBR report alongside it was foolish.

Align that with inflation at 9.9 per cent and questions hanging over the Bank of England’s monetary policy performance – and even its independence – and you have a recipe for your bold plans massively backfiring.

Trust is hard to earn and easy to lose and a lot of faith in Britain’s prudent ability to manage its finances has been squandered.

Back in the financial crisis days, I used to tell one of our reporters off for his overuse of the word carnage – but recent days have felt pretty carnagey

This culminated in the Bank of England staging that intervention yesterday, with an emergency bond buying ‘gilt market operation’ that we explain here. 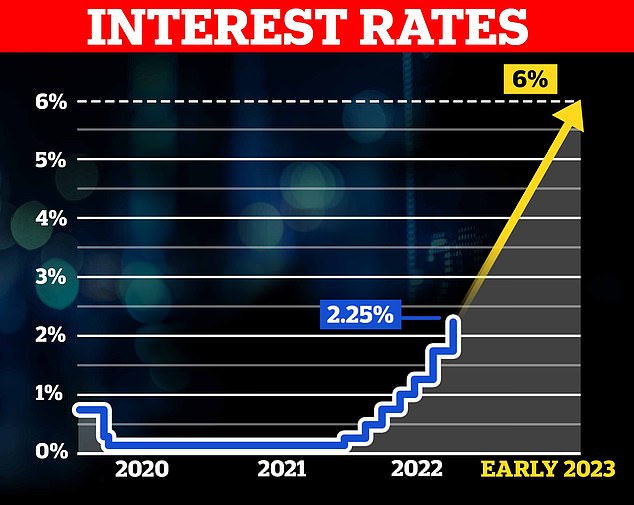 The aftermath of the fiscal splurge has seen the pound tumble, UK borrowing rates soar and led to forecasts that the base rate could now be hiked as high as 6%

Hopefully, the Bank’s action will work and will also help stabilise the mortgage market, where borrowers have seen rates soar – adding hundreds of pounds a month to payments for those who find themselves in the unfortunate position of needing to remortgage.

I have spoken to borrowers this week who face their monthly bills rising by £400 or £500, as they come off cheap fixed rate deals taken out two or five years ago and face much higher rates now.

Many of those whose mortgage fixes end at any time in the next two years are very concerned by the payment shock they face, but the most pressing scenario is for those whose deals finish in the next three to six months.

They are not only staring down the barrel of much higher rates but have also seen swathes of lenders axe deals or pull out of the market for new business this week, creating a sense of panic.

There is no need to panic, as we explain in our What to do if you need to get a mortgage guide, brokers we have spoken to this week assure us that deals are available, but they add that rates are shifting quickly and call volumes are running very high.

Normally, when the fear gauge is cranked up it’s the worst time to try to do something, but for those needing to secure a mortgage the problem is that there are also forecasts the Bank of England may now need to raise base rate as high as 6.25 per cent.

Whether it could ever actually get there before the severe financial pain wreaked on people stalled rises is something that I would question. But I’d also never have forecast rates would rise as fast as they have this year – and I’ve spent years arguing for rate rises when the Bank stalled. 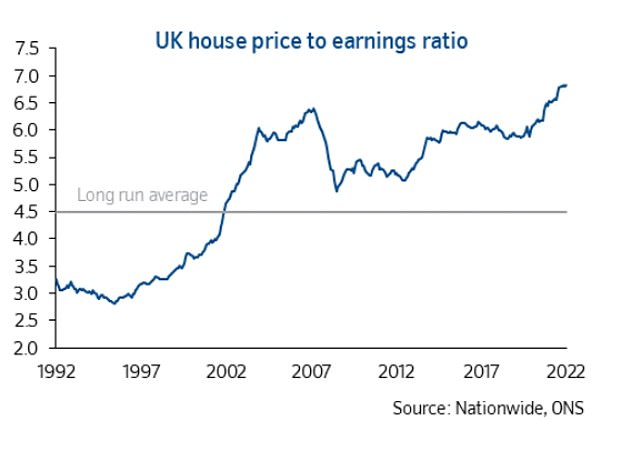 Homes are more expensive compared to earnings than they have ever been, yet the message from many in the financial industry has been that this doesn’t matter as mortgage rates are low – now they are spiralling and borrowers have been caught out

Borrowers have every right to feel hard done by here, as they spent years being reassured by central banks that when rates rose it would be gently and gradually.

Instead, it turns out the move up was delayed too long and then hikes were delivered brutally and swiftly.

Borrowers spent years being reassured by central banks that rates would rise gently and gradually. Instead, it’s been brutally and swiftly

I’ve spent years writing about mortgages and house prices and have regularly posted updated versions of the chart above, showing house prices vs wages.

It illustrates how even after the financial crisis property values never got back to their long run average and how the ratio as rocketed back up since 2012.

Homes are more expensive compared to earnings than they have ever been and it’s been abundantly clear that unless wages started rising substantially, this would be an issue when interest rates started to rise.

Others regularly expressed this same concern, yet it has been resolutely dismissed as a non-issue by many in the financial industry.

The message from those supposedly in the know has been that this doesn’t matter as mortgage rates were low and monthly payments are affordable – now they are spiralling and borrowers are getting hammered.

Will we see any banks, building societies, other financial firms, or even the regulators hold their hands up and say, ‘sorry, we were wrong?’ I seriously doubt it.

This will bring about yet another bout of inter-generational inequality, as it is the heavily mortgaged generation of homeowners in their 40s, 30s and 20s who face the pain.

That person in the example above with the £250,000 mortgage could be an individual earning £60,000 a year. They are looking at almost £6,000 a year extra in mortgage payments and that will eat £10,000 a year before tax from their earnings just to cover the extra costs of remaining in their home at higher rates.

So for instance, take 1980. Back then, official BoE interest rates were on average 14.2%.
But because people were much less heavily indebted, because their incomes were much higher vs their repayments, that was, in affordability terms, EQUIVALENT to 3% in today’s interest rates. pic.twitter.com/1CvoEZbBeF

I know there will be many reading this column who remember the property pain of the early 1990s and dismiss complaints about 5 per cent mortgage rates with a wry look.

Yet, house prices were lower compared to wages then and if you adjust for affordability then much lower rates are needed to bring the same pain now.

This affordability adjusted rates chart from Sky’s Ed Conway, based on research by Neal Hudson from BuiltPlace, illustrates that point, showing that nowadays rates at 6 per cent would bring a similar mortgage burden to the double-digits of the early 1990s.

Let’s hope the Bank of England and government get a grip on this situation fast, in the meantime This is Money will keep you updated on what you need to know and what it means for you.