Heavy breathers could be Covid-19 SUPERSPREADERS

It has long been known that superspreaders are responsible for the vast majority of coronavirus infections and now a study has found heavy breathers are likely culprits.

Data shows more than 80 per cent of all exhaled aerosol particles are produced by less than one in five people, meeting the technical definition for superspreaders.

These tiny particles can carry viruses including SARS-CoV-2, which causes Covid-19, and are so small they float around in a room and can linger for several minutes.

Older people, those with a large BMI, and infected cases are more likely to be heavy breathers spewing out huge amounts of infectious particles, the research shows.

Older people and those with a large BMI are more likely to be heavy breathers spewing out huge amounts of infectious particles, the research shows

The first part of the study measured the number of particles expressed per individual per litre and compared it to a combination of their age and BMI.

It showed a strong link between age and BMI with increased production of exhaled aerosols, indicating fatter and older people are the worst offenders for being heavy breather superspreaders.

The so-called 80:20 rule means that for something to be scientifically considered as a superspreader event, at least 80 per cent of infections must be caused by no more than 20 per cent of people.

‘The phenomenon of superspreading of COVID-19 may be not only a matter of air currents and proximity of infected and naive hosts but also of phenotype,’ the scientists write in their paper published in PNAS.

Exhaled breath of 194 health people was studied by scientists at Harvard, MIT and Tulane University.

They also deliberately gave Covid to eight monkeys to see if infection with the coronavirus affected the amount of produced aerosols.

Writing in their study, the authors say the Covid-19 particles produced by infected primates ‘rises to a crescendo’ a week after infection before falling to normal after two weeks in a similar way to as seen in humans. 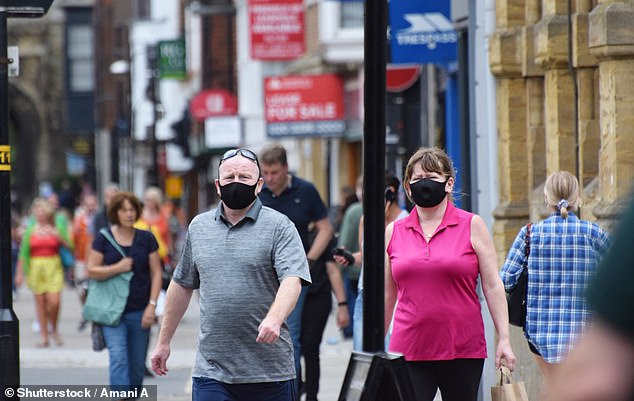 Data shows more than 80 per cent of all exhaled aerosol particles are produced by less than one in five people. These tiny particles can carry viruses including SARS-CoV-2, which causes Covid-19, and are so small they float around in a room and can linger for several minutes (stock)

The increase in exhaled aerosols occurred even among asymptomatic cases of Covid-19, says Dr Chad Roy, corresponding author of the study from Tulane.

‘It seems likely that viral and bacterial infections of the airway can weaken airway mucus, which promotes the movement of infectious particles into this environment,’ he said.

Lead author Dr David Edwards, from Harvard, believes how many respiratory droplets a person produces changes depending on their body and health.

‘While our results show that the young and healthy tend to generate far fewer droplets than the older and less healthy, they also show that any of us, when infected by COVID-19, may be at risk of producing a large number of respiratory droplets,’ he said.

Semaglutide, sold under the brand names Ozempic and Rybelsus, was trialled on almost 2,000 obese adults around the world.

More than one third of people who took the drug lost a fifth of their total body weight while the majority (75 per cent) lost at least one tenth of their body weight.

Researchers say the findings are a game-changer because weight loss can be achieved in people who would otherwise require surgery.