Work is well-underway at a post-Brexit lorry park dubbed ‘Farage’s Garage,’ that could hold nearly 2,000 vehicles should there be delays at Dover.

Heavy machinery is digging up land at a 27-acre field in Sevington, Kent, which will be used as a customs checking point, as well as an emergency holding in the event of delays at English ports, including nearby Dover.

There are fears up to 7,000 HGVs could be left queuing on the English side of the Channel, should the Government fail to reach a trade agreement with the European Union by December 31.

But even if a deal is reached, a report published today predicts there will still be delays on January 1.

By July 2021, the area’s main function will be a HMRC customs check centre if the Government plans come to fruition.

Thousands of people have backed a tongue-in-cheek campaign to name the facility after Brexit Party leader Nigel Farage.

Work is underway to convert a 27-acre field into a post-Brexit lorry park, next to a 13th century church in the village of Sevington, Kent 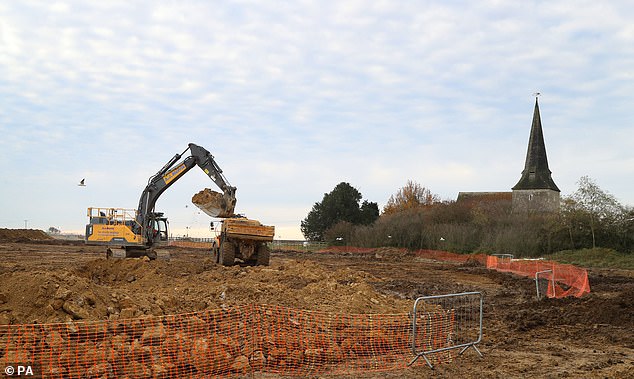 Once built, the site, near Junction 10A of the M20 in Ashford, will be used for custom checks, but will be able to hold 2,000 lorries if there are delays at Dover 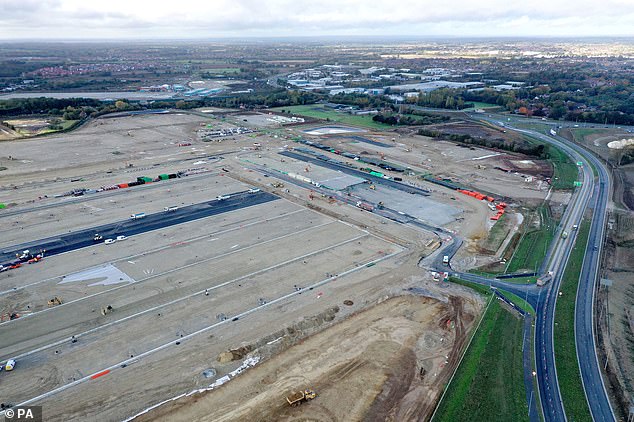 A view of the area near Sevington in Ashford, Kent, where the Government is developing the 27-acre site near the town

Government spending watchdogs said there could be queues of up to 7,000 lorries waiting to cross the Channel from Dover.

Passenger traffic for Dover ferries and the Channel Tunnel could also suffer delays of up to two hours during January, with waiting times potentially worsening during 2021.

The National Audit Office said that although the Government had made progress updating customs systems and other infrastructure it still expected ‘widespread disruption’.

The Government has plans for 10 post-Brexit sites, three of which still require full permission.

Ministers gave themselves powers to build in 29 local authorities across the country, stretching the likes of Devon and Kent and Devon in the South, to Liverpool and Hull in the North.

Nearly 30,000 people have signed a petition to name the site at Sevington either ‘Farage’s Garage’ and ‘Nigel’s folly’.

The tongue-in-cheek petition reads: ‘The undersigned request that the new brexit lorry park in kent be named after Nigel Farage, without his years of selfish grift, dissembling and misapplied zeal on the behalf of the more gullible voters of Kent this project just would not be happening.

‘It is fitting that every lorry driver, every commuter and every local resident has a chance to link this fine example of civil engineering to its true hero.’ 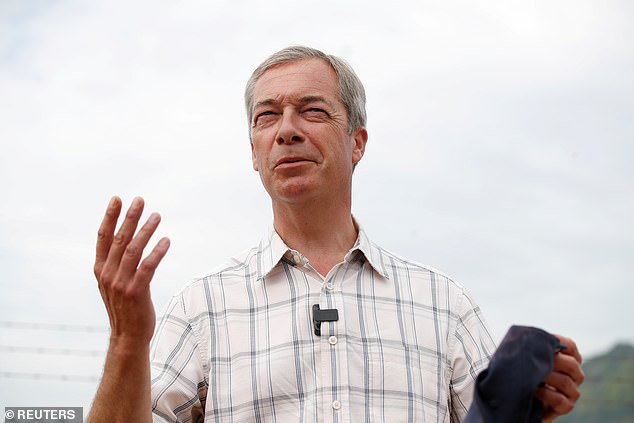 Nearly 30,000 people have signed a petition calling for the site in Sevington to be called either Farage’s Garage or Nigel’s Folly 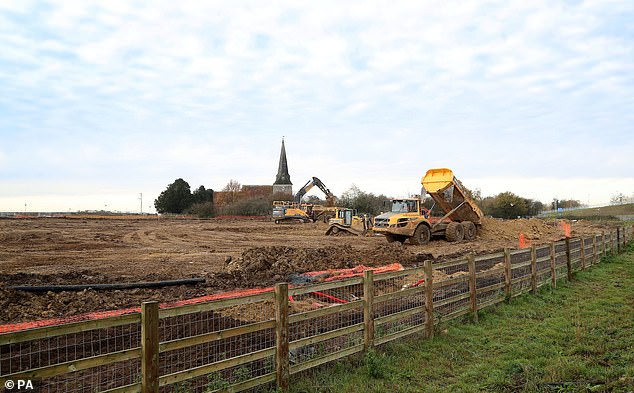 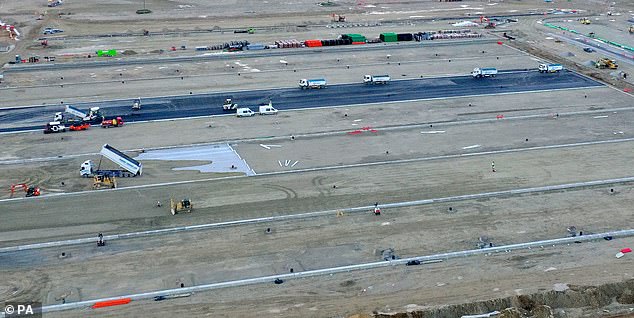 Drone photos show a vast 27-acre Kent field dubbed ‘Farage’s Garage’ being turned into a lorry park for up to 2,000 trucks 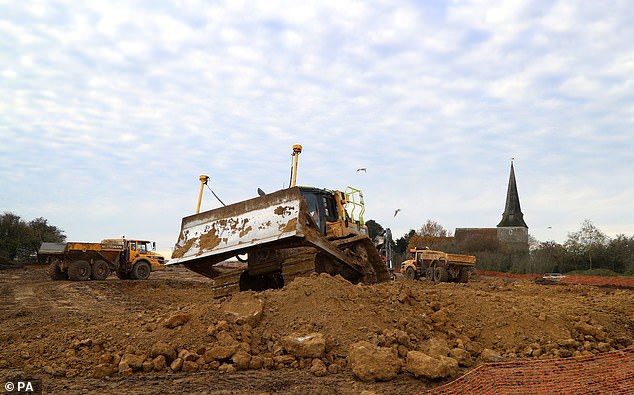 It is hoped the land will not need to be used as a lorry park, but it is one of 27 sites that are being built for that eventuality, should a deal fail to materialise and there are long cross-Channel delays 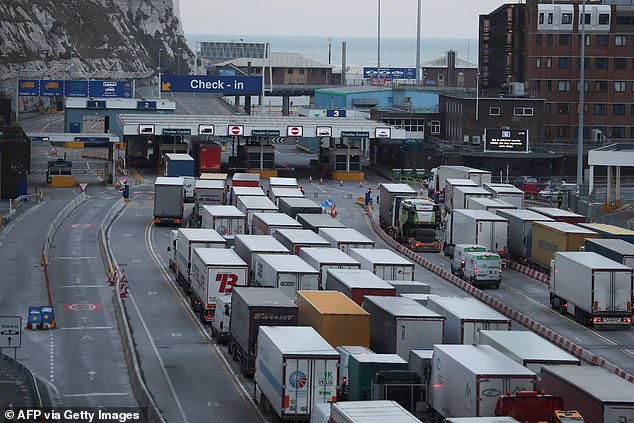 The National Audit Office has warned there will be ‘widespread disruption,’ at British ports, such as Dover (pictured), come January 1 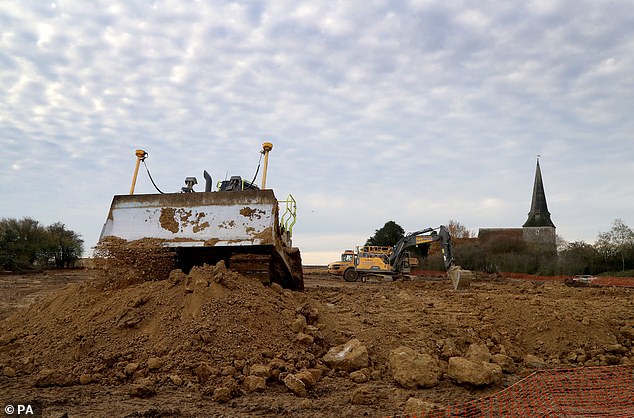 The Government has plans for 10 lorry parks across England, including in Sevington, but has powers to build in 29 different local authorities in both the North and South

As well as being one of the key architects of Britain’s referendum result in 2016, the former UKIP leader has close ties to Kent.

The former South East MEP lives in Westerham, just under an hour’s drive from Sevington.

The 29 areas where Government can build a Brexit lorry park

The petition goes on to say: ‘It maybe (sic) the Mr Farage will be unable or unwilling to attend the unveiling of this great honour that we do him but that shouldn’t get in the way of seeing his name and huge gurn plastered all over the boundary fence at regular intervals topped by a coil of razor wire no doubt festooned with the shreds of black farmers plastic known as witches knickers.

‘For the foreseeable future everyone should genuinely be able to refer to this diesel soaked valhalla as Nigel’s Folly.’

Work on the facility began in the summer, and it is expected to be able to house the lorries when the transition period ends at the end of 2020.

The Government has permission to build lorry parks in 29 areas of England in order to cope with potential post-Brexit border trading chaos as hopes of a UK-EU free trade deal are repeatedly dashed.

Locals will not have a say in the construction of the sites which are being built in Leicestershire, Warwickshire, Solihull, Kent, Essex, Yorkshire and Lincolnshire.

The sites have been planned because of fears that truck drivers will face long delays to enter the EU.

She said: ‘First, government departments envisage using it as a permanent site for facilities related to future border processes, notably HMRC (as an office of departure/arrival for goods moved under ‘transit’ arrangements) and Defra (as a border control post for goods needing sanitary and phytosanitary checks).

‘Second, the site may also be used as a contingency lorry holding area for the particular, foreseeable risk of significant disruption at the end of the transition period.’

Ms Maclean added Downing Street had ‘no intention’ the site would become a permanent lorry holding facility for use in the event of ‘cross-Channel disruption’.

The photos have appeared amid news that toilets and food and drink facilities for haulage drivers will line the M20 in Kent in preparation for the 7,000 lorries predicted to be stuck in static traffic on January 1.