She loves to play dress up.

And on Sunday, Heidi Klum had fun as she shared several behind-the-scenes videos from the upcoming Germany’s Next Topmodel season finale.

The fashion icon, 49, looked nearly unrecognizable wearing a pastel pink wig and several other eclectic pieces before she switched back to a more natural look.

Versatile style: Heidi Klum went from pink princess to blonde bombshell while working on the set of the upcoming Germany’s Next Topmodel season finale on Sunday

Klum showed off her eye-catching outfit in a number of time-lapse videos.

After she was finished with the first portion of the day’s work, the supermodel headed back to the dressing room and shared a clip that showed a stylist working on her hair.

She followed up with two identical videos that showed off her new look, which was comprised of a bright pink button-up blouse that was tucked into a darker skirt and worn on top of a lace bra. 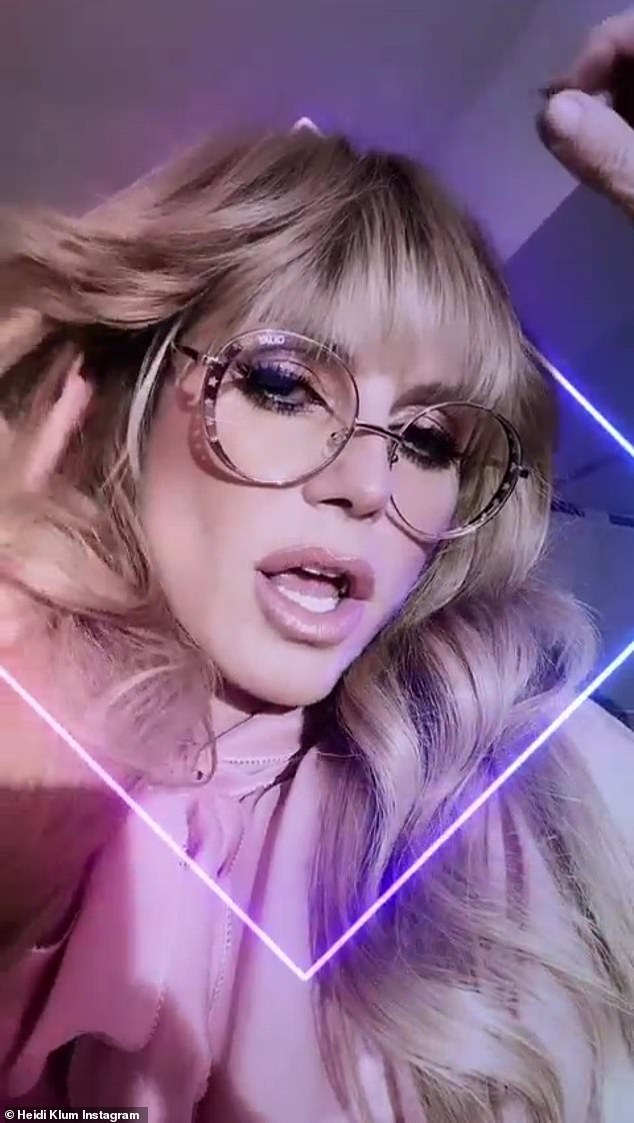 Switching up: The fashion industry figure wowed her followers by ditching a bright pink wig and putting her luscious golden locks on full display 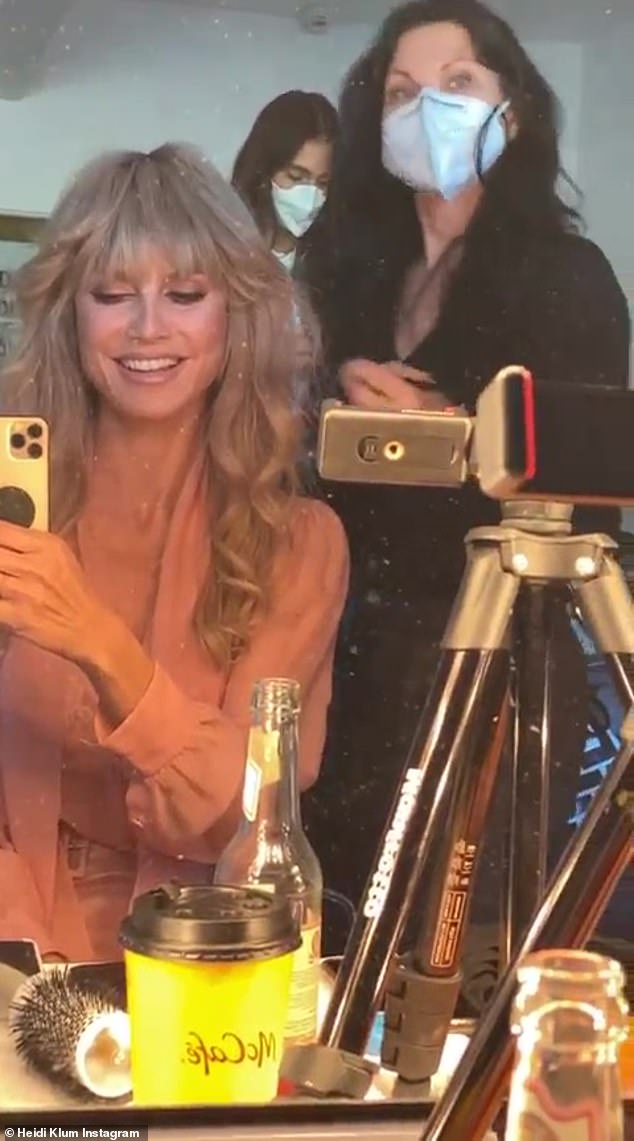 An inside look: The reality television personality shared a video from the makeup chair where a stylist attended to her haircare needs

The reality television personality’s gorgeous blonde bangs just reached the top of a stylish pair of circular glasses, and her outfit was finished off with a set of high-heeled shoes.

Klum was also seen receiving a bit of help from a makeup artist and chewing bubblegum with the production’s director in her other videos.

Her final Story entry was a repost from another account, and she was seen relaxing at a desk while the production crew finished up the day’s work. 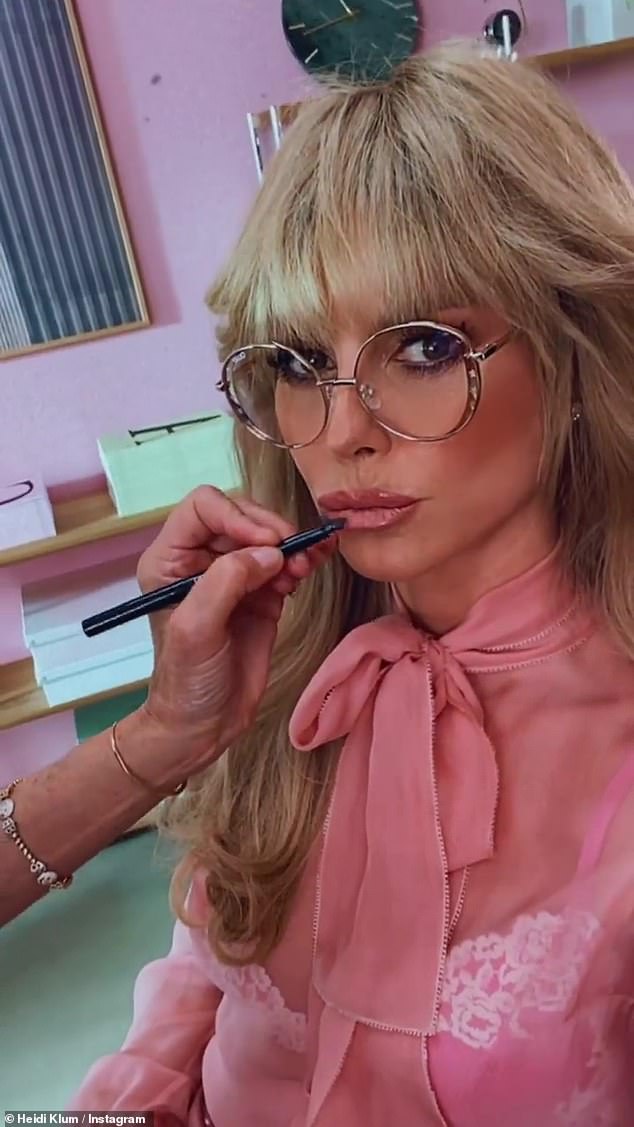 Dressed for success: She was seen wearing a slightly transparent pink blouse on top of a brighter lace bra, as well as a pair of stylish circular sunglasses 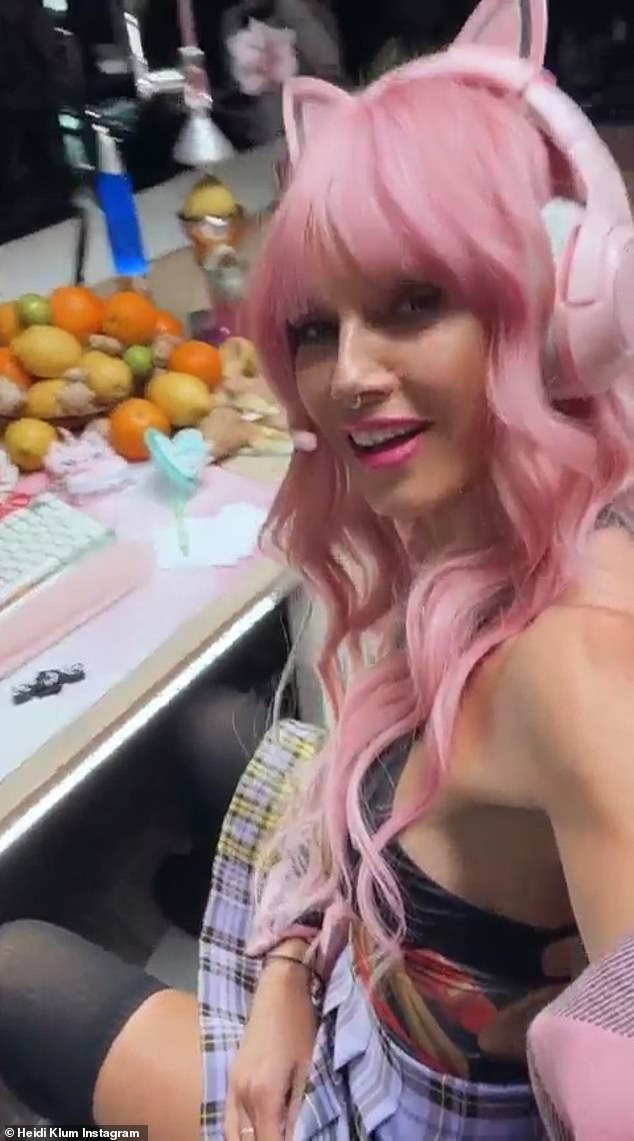 A new look: Klum was having a blast wearing a pastel pink wig as she transformed into a punk princess in behind-the-scenes look at the Germany’s Next Topmodel finale

Earlier in the day, Klum was seen looking completely at ease in a funky ensemble as she channeled a gamer chick with ’90s grunge vibes.

The blonde beauty referred to her dressing room as ‘heaven’ as she primped and prepped or another long day of shooting.

After showing her eight million followers some of the outfits and jewelry she would be wearing, she commented that she had ‘lots to do today.’ 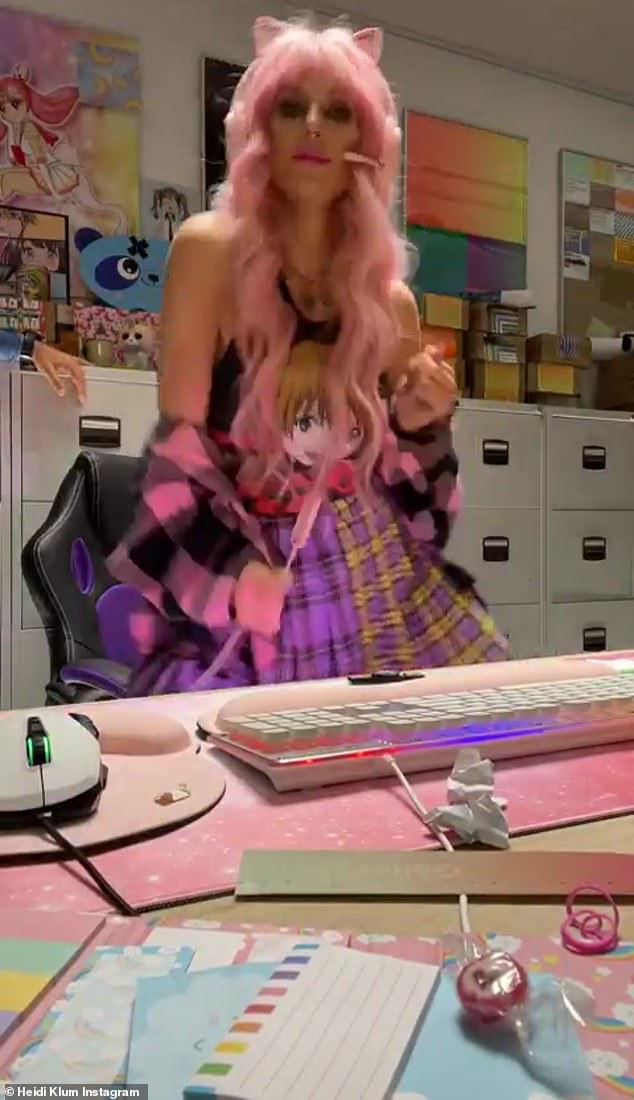 Having fun: The 49-year-old supermodel sat in the makeup chair before chatting with the crew from her famous television show in wild stories shared to Instagram on Sunday 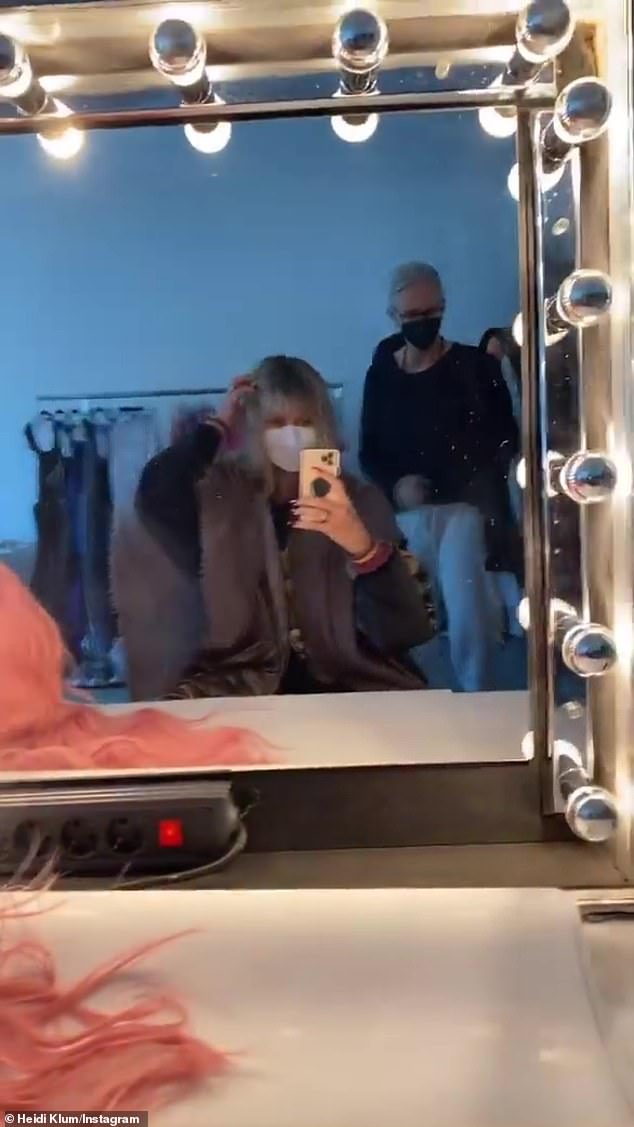 Getting ready: The blonde beauty referred to her dressing room as ‘heaven’ as she primped and prepped or another long day of shooting

Klum noted that her day ahead was ‘going to be interesting’ before she winked at the camera.

The fashion industry powerhouse spoke to the project’s director, David Helmut, who initially expressed that the two could not reveal anything about the day’s work, which she jovially brushed off.

She also shared a quick clip of herself dancing in a working area while waiting for a shoot to begin.

Klum was dressed in a white T-shirt underneath a set of bright blue overalls, and her typically flowing blonde hair was notably tied back. 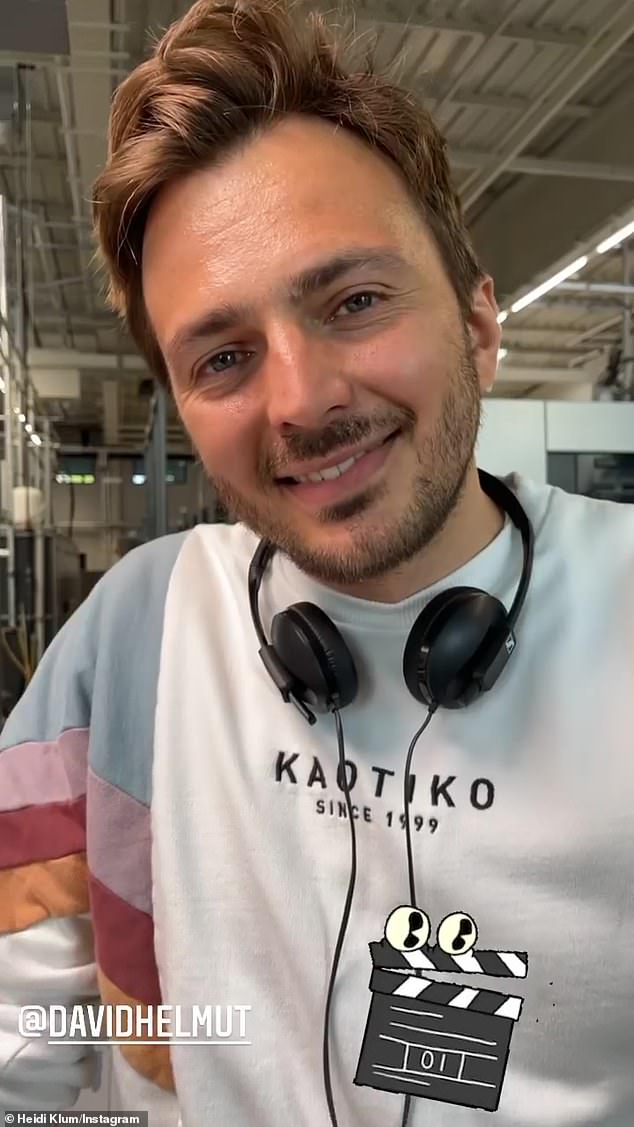 Not a big deal: Klum was seen speaking to the project’s director, David Helmut, who expressed that they could not reveal anything big just yet

Color coordination: The fashion industry icon also shared a clip that showed off her eye-catching wardrobe

The reality television personality managed to take a video of her makeup artists working on her look before the day’s shoot began.

The America’s Got Talent judge then placed her cartoonish costume on full display for her fans in the next clip.

Klum was seen wearing an outlandish bright pink wig with locks that draped onto her shoulders and chest during the project’s filming. 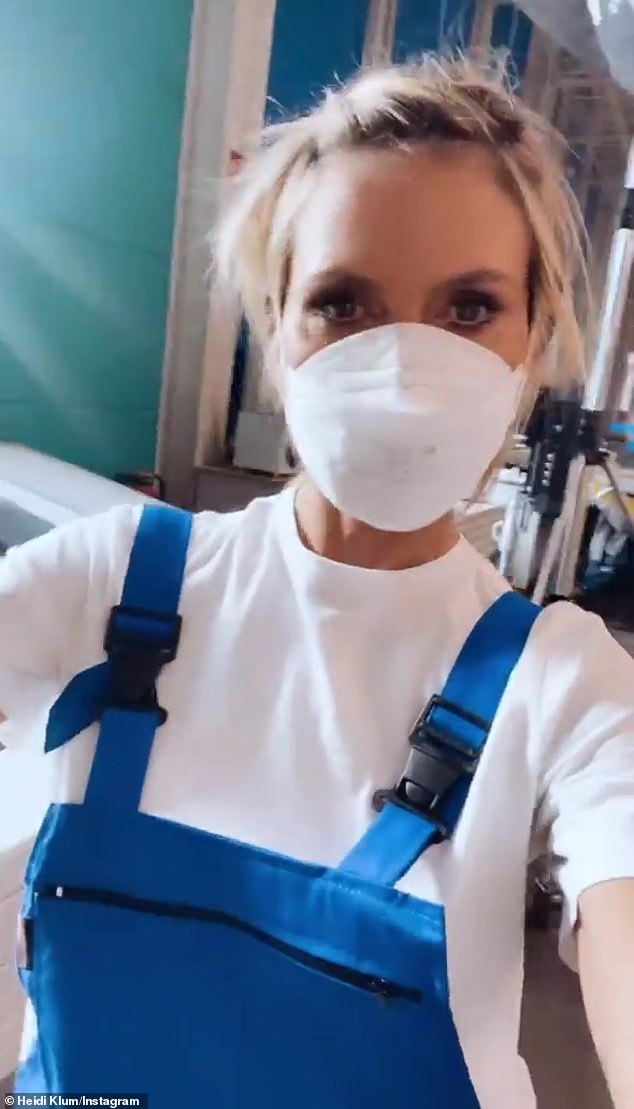 Having fun: Klum was seen dancing while preparing to shoot a separate scene in one of her later videos 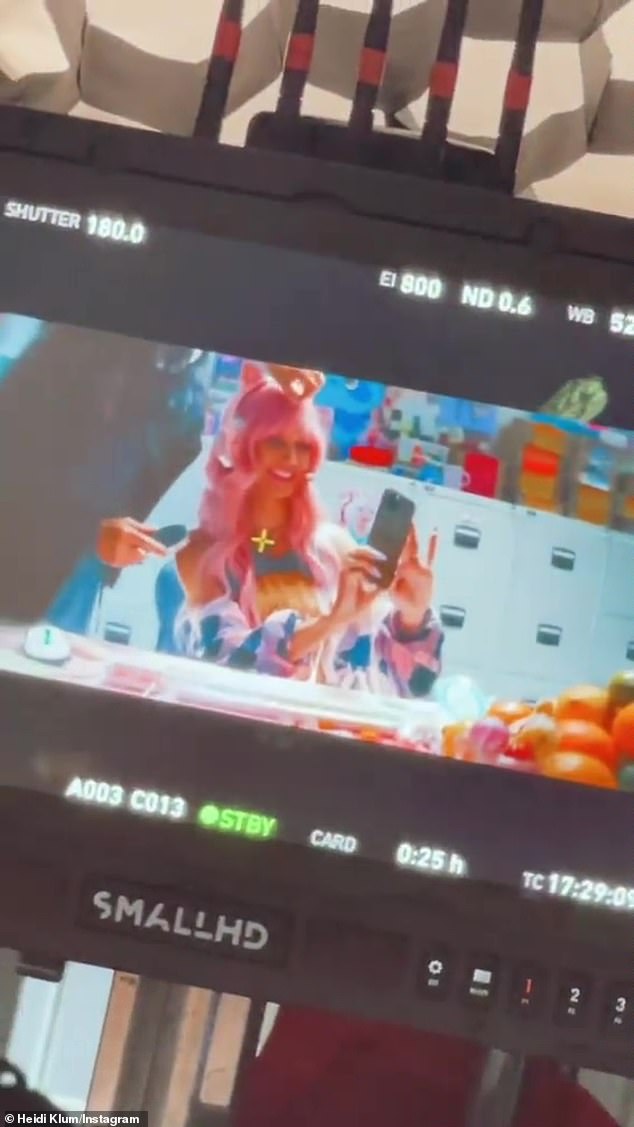 Putting in work: The supermodel took a video while sitting behind a camera to give her fans a better look at the video’s scenery

She also wore a black tank top shirt featuring a graphic of a character from the popular anime series Neon Genesis: Evangelion, as well as a black-and-white flannel and a plaid skirt.

Heidi also wore a pair of cat-eared headphones that matched the color of her wig, as well as a clip-on septum piercing.

Klum has been at the helm of Germany’s Next Topmodel since its first episode in 2006 and is a mainstay on the judging panel throughout the show’s 16 seasons. 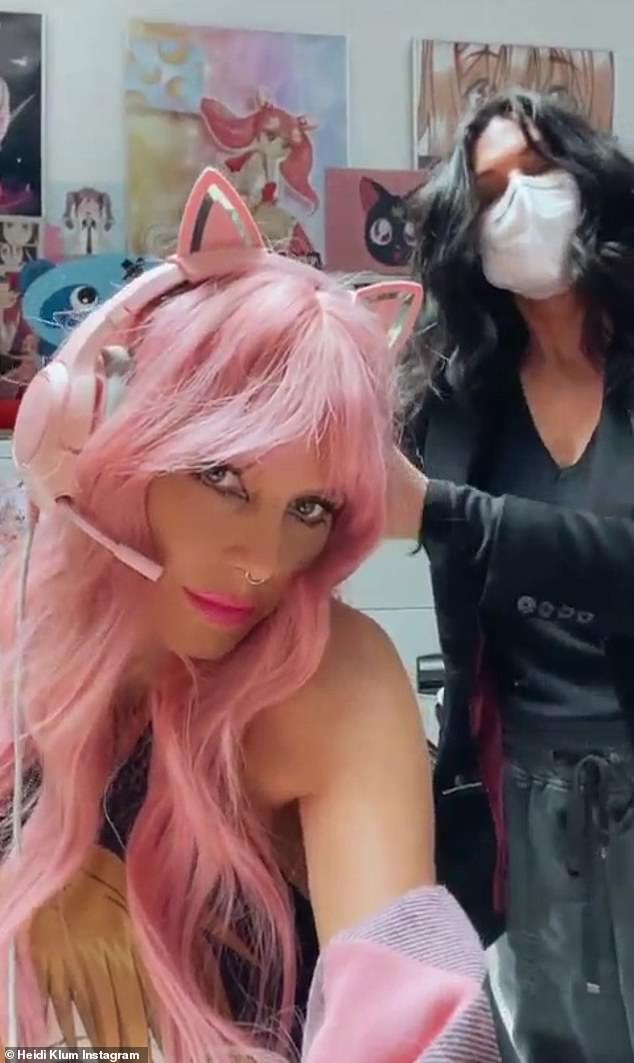 Boss: Klum has been at the helm of Germany’s Next Topmodel since its first episode in 2006 and is a mainstay on the judging panel throughout the show’s 16 seasons