Heinz has announced it will not be renaming Salad Cream after it received huge backlash from the public.

The name of the popular condiment was set to be renamed Sandwich Cream as part of a rebrand, as Heinz said it no longer ‘fairly represents’ how most people use it.

In a video released yesterday, Heinz chiefs admitted they were wrong.

Heinz initially had plans to rename Salad Cream to Sandwich Cream, but have now decided against the rebrand

In the tongue-in-cheek clip, Heinz’s apparent head of feedback, Jenny Lettuce, apologsised for the mistake.

She said: ‘We can’t ignore the will of the people after all. Salad Cream is here to stay’ – before she then takes a bite out of a sandwich.

She is also seen demonstrating a number of other bizarre uses for the cream.

What are the ingredients in Heinz’s Salad Cream?

Salad cream is always based on an emulsion of about 25–50 percent oil in water, emulsified by egg yolk and acidulated by spirit vinegar,

Lettuce then claimed the cream is an ‘essential part of my skincare routine for years’, rubbing the sauce into her face.

The clip finishes: ‘You spoke. We listened. Thank you.’

When Heinz were weighing up their decision to change the name, they said that only 14 per cent of buyer’s dress salads with the sauce, as it’s now much more popular to use it as an accompaniment to tuna, ham or cheese in sandwiches as an alternative to mayonnaise.

A spokesman for Heinz told trade journal The Grocer the name no longer ‘fairly represents the product’s ingredients or usage occasions’.

According to The Grocer, it is considering the name ‘Sandwich Cream’ to represent its appeal to ‘younger shoppers.’ 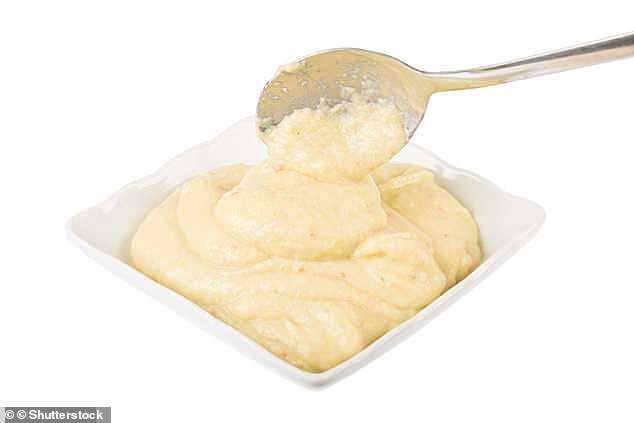 The Heinz spokesman added: ‘As a market leading business, Kraft Heinz continues to audit its portfolio in order to meet the needs of consumers.

‘There are consumers now who haven’t grown up with the brand in the household and just don’t know about the iconic zingy flavour or what to eat it with.’

The consultation process means the earliest a new name will be introduced is in September.

In 1999, it was revealed that Heinz were about to ditch the brand but once the leak was published it led to a major protest by shoppers and it saved the brand.

The publicity helped sales and Heinz took advantage by relaunching Salad Cream in new-look packs and putting the price up.

The history of Heinz Salad Cream

1914 – Heinz brings Salad Cream to market after eight years in development. It becomes popular with the working classes.

1999 – Heinz threatens to discontinue the brand following falling sales due to Britons switching to mayonnaise but it is saved in 2000 after a national outcry.

2010 – Heinz launches a Lemon and Black Pepper version after sales revive as the sauce is lower in fat than mayonnaise.

June 2018 – Heinz reveals it is changing the name of the iconic brand to reflect modern uses for the condiment. The frontrunner is ‘Sandwich Cream’