Heiress to Berkeley Homes £310m fortune, 26, is spared jail after kicking policeman in the crotch and spitting in his colleague’s face leaving him temporarily blinded

The heiress to a £310 million property empire has been spared jail after she kicked a policeman in the crotch and spat in his colleague’s face leaving him temporarily blinded.

Chloe Pidgley, 26, today admitted assaulting the officers at her flat in Earl’s Court, west London, three days after her ex Antonio Henry was jailed for brutally attacking her.

Today Pidgley was given a 12-month community order, unpaid work of 100 hours and up to 20 days of rehabilitation activity requirement.

Henry, 29, had punched and kicked Pidgley in the face on 18 June last year before slamming her hand in a door, breaking two of her fingers.

He then threatened to come back and throw acid at Pidgley, the granddaughter of Berkeley Homes founder Tony Pidgley.

Henry, from Ealing, admitted assault and criminal damage and was jailed for 21 months at Isleworth Crown Court.

PC Calum Jackson and PC Jake Harris were called to Pidgley’s home three days later, on 29 March, after receiving reports from the ambulance service that she was threatening to self harm.

The officers turned up to find the heiress heavily intoxicated with slit wrists.

Prosecutor Katie Bryan told the court: ‘Police noticed fresh cuts to her wrists that were still bleeding at the time.

‘She invited them in and officers tried to engage with her asking questions about her visible injuries. The defendant was described as intoxicated and very emotional. She refused to engage with officers and said she wanted them to leave.’

The police officers then explained they were waiting for an ambulance and warned Pidgley that she could be sectioned if she tried to go outside, the court heard. 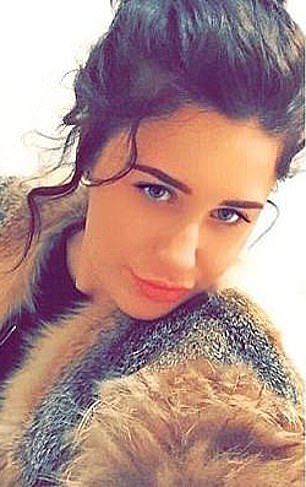 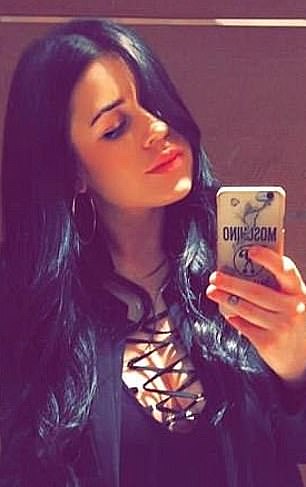 The court heard officers found Pidgley with cut wrists and tried to get her to wait for an ambulance before she kicked, spat at and attacked them

The prosecutor said: ‘The defendant however continued out onto the street and she described as becoming more agitated out on the pathway.

‘Traffic at that point [on her road] is described as heavy. PC Jackson placed himself between the defendant and the road and again said he would place her under section.

‘She tried to push past him at that point. He took hold of her arm. PC Harris then intervened, taking hold of the other arm and it was at that point the defendant kicked him making contact with his genitals.

‘She turned to face [PC Jackson] and spat into his face, going into his eyes.

‘He described being momentarily blinded but remained holding onto the defendant while PC Harris took her to the floor.

‘She remained on the floor kicking and shouting until ambulance services arrived and took her to A&E.’ 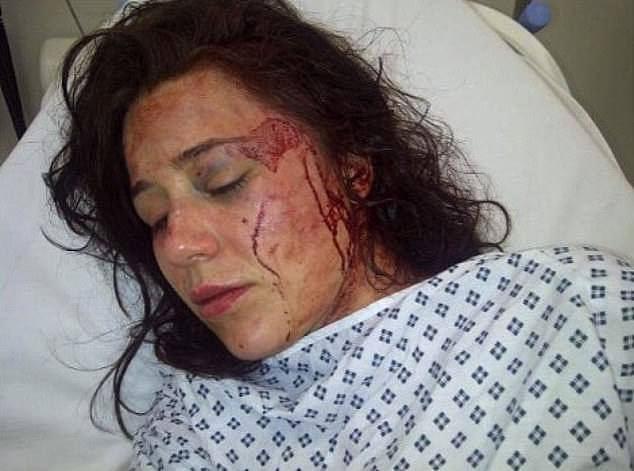 The incident came after her ex-boyfriend was jailed for attacking her. She has previously spoken about her ordeal and has told a court she was suffering from PTSD

Pidgley was transferred to hospital and discharged the next day.

The prosecutor said Pidgley has previously appeared in court for shoplifting and again for being drunk and disorderly in 2015.

She admitted two counts of assault before sitting with her lawyer, sobbing at Hendon Magistrates’ Court today.

Pidgley told an earlier hearing that she had been suffering post-traumatic stress disorder and was struggling with the aftermath of her abusive relationship.

‘I got attacked by a boyfriend and I had to go to court over it,’ she said.

‘I have post-traumatic stress disorder and I thought my dad was going to pay for the solicitor but he changed his mind at the last minute.’

Pidgley had failed to attend an earlier hearing at Westminster Magistrates Court in August and a warrant was issued for her arrest. She then voluntarily contacted police two days later.

Tony Pidgley is the founder of the famous property developer Berkeley Homes and thought to be worth a staggering £310million.

Both Chloe and her model sister, Chantelle, reportedly received a ‘coming of age’ sum of £1million each.