He’s Call The Midwife’s ‘handsome widower’, but when Olly Rix meets fans he often finds they’re more interested in telling him off than swooning.

While they like his character – Matthew Aylward, the rich, handsome landlord who’s swept nurse Trixie Franklin off her feet as well as underpinned the financial security of the midwives’ base Nonnatus House – they’re also worried he’s going to be the next chap to leave Trixie heartbroken.

‘Some of them get a bit, er, threatening,’ admits Olly, who joined the show last year when Trixie delivered Matthew’s son. His wife then died of leukaemia and this has been the slowest of slow-burn romances, moving from support to friendship and then love.

‘Fans are very protective of Trixie. They say things like, “You’d better treat her right!”

Call The Midwife is back on our screens for another emotional Christmas special. This year, the beloved midwife Trixie Franklin (Helen George) could get her happy ending with Matthew Aylward (Olly Rix)

‘I get this from people I meet on the street, in letters and even on Instagram. They’ve loved Trixie for more than a decade, so I feel quite scrutinised and watched.’

But Helen George, who plays Trixie, says he’s still seen as a heartthrob. ‘A group of trainee midwives came onto the set and they asked whether Olly was going to be in,’ she recalls.

‘When I said they’d get a chance to meet him later, they actually screamed.’

The good news then is that this year’s Midwife Christmas special is going to be even more special for Trixie fans, as we see perhaps the first man who truly deserves her trying to propose.

‘This is a story we’ve waited a long time for – it’s been 12 years,’ laughs Helen. ‘I didn’t want her to find a romance that would mean she’d lose her identity, but what I love about these two is that they work so well together. 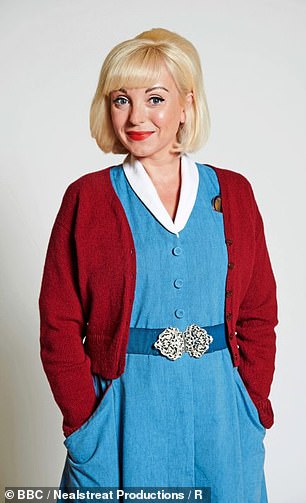 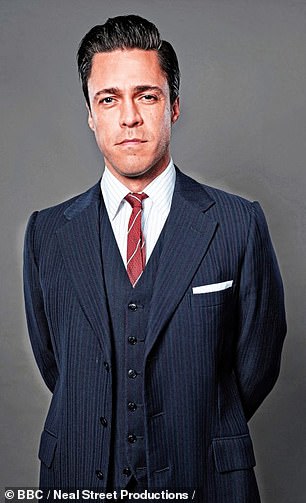 Matthew Aylward (right) is the rich, handsome landlord who’s swept nurse Trixie Franklin off her feet (left)  as well as underpinned the financial security of the midwives’ base Nonnatus House

Matthew has become integral to Nonnatus hous and Trixie still has the freedom of her career. He’s someone who comes into her world and has his own part in it.’

Helen’s real life has often been referenced in Call The Midwife. The final story of the last series, which featured a pregnant woman being ill with cholestasis, was inspired by Helen’s own experience.

She’s had the liver disorder during both her pregnancies with her daughters Wren and Lark. Not only does it cause itching, it can affect the baby and lead to premature labour and stillbirth.

Helen – whose partner is Jack Ashton (who played Trixie’s former fiancé the Rev Tom Hereward) – ended up going into labour early with Lark last year while working on the set of DI Ray.

‘I started having twinges when we were in the middle of a scene and I thought, “Oh, I’d better get going,”’ she recalls.

Trixie can be a bit of a nightmare. She’s brilliant but demands a lot of people

‘Thankfully it was the last scene. I got on a train and someone recognised me and said, “We’re going to have to call the midwife!” and I thought, “You have no idea!” I kept my legs shut and the next morning I was giving birth.’

Another issue the show has highlighted is Thalidomide, and that comes up in the Christmas storyline as we catch up with Susan Mullucks, who was born without hands or feet in season five. She’s now a sprightly sixyear-old, eager to play with her peers but struggling with mobility.

As ever, joy and tragedy sit cheek-by-jowl in this snow-filled Christmas special. Two midwives are gone by the end of the episode, babies are born and the community of Poplar – still suffering from the shock of the train crash in the last series – has been brought together by handyman Fred (Cliff Parisi) for an Opportunity Knocks-style talent show.

The episode provides a curtain raiser for series 12 – set in 1968 – which begins in January. There are social issues such as Enoch Powell’s Rivers of Blood speech, a new nun and a wedding for Trixie.

But don’t expect things to run smoothly. There’s a lost tiara, a wedding dress to design and the odd row between our lovebirds.

‘Trixie can be a bit of a nightmare,’ whispers Helen. ‘I think she’s brilliant, obviously, but she demands a lot of people.

‘She challenges Matthew, who’s come from this life where he’s never known poverty, and she takes him down into the dirt, the mess, the disease, the fleas. She confronts him and they fight a lot, but that’s real life, isn’t it? Call The Midwife is about life with all its messes.’

Read more:  Call the Midwife is set to lose two popular characters during the emotional Christmas Special this year

‘It was very distressing’: Call The Midwife ‘suffers a real life health scare as baby is rushed to hospital after falling seriously ill’ on set of period hospital drama

‘Get out of here!’ Call The Midwife’s Jenny Agutter, 69, reveals Tom Cruise keeps ruining filming by landing his helicopter during takes