Helicopter with four people on board crashes near Whitsundays

Two people have died in a helicopter crash off Queensland’s Whitsunday Islands, it has been confirmed.

The Civil Aviation Safety Authority said four people were aboard the Eurocopter 120 which went down near Hardy Reef pontoon at about 4.30pm Wednesday.

One person is in a serious condition while the two others escaped with minor injuries.

Police and other emergency service vessels are en route to Hardy Reef with the crash site about 65km northeast of the Whitsundays.

The helicopter is believed to have crashed into the water 250 metres from the Hardy Reef pontoon.

In a statement, the company that owns the helicopter, Whitsunday Air Services, confirmed the fatalities.

‘The accident occurred while the helicopter was on final approach for a landing at it’s Hardy Reef Heliport and resulted in two fatalities and two passengers sustaining minor injuries.

‘We are extremely saddened by this incident and our deepest condolences are with the families of all of the passengers. Whitsunday Air Services is continuing to work with the Queensland Police, the ATSB and CASA to assist with their investigations.

‘Whitsunday Air Services will be suspending all operations while a full review process is undertaken. Further information will be released in due course.’ 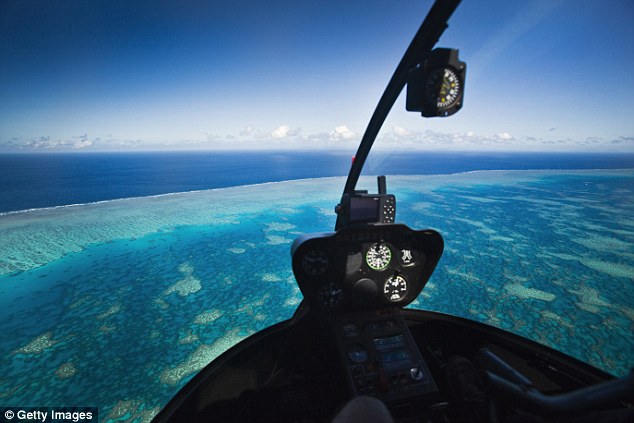 The helicopter was reportedly fully submerged when it crashed into the water, but passengers managed to escape the wreckage.

Queensland Ambulance Service paramedics rushed to the scene via emergency helicopter about 6pm.

Paramedics were providing CPR instructions to witnesses over the phone, en-route to the scene.

The Australian Transport Safety Bureau (ATSB) told Daily Mail Australia a team of investigators would travel to the accident location to collect evidence.