President Donald Trump brought in TV cameras a reporters for a lengthy conference call in English and Spanish with the president of Mexico – who offered Trump a long-distance ‘affectionate hug’ that Trump said would be ‘very nice.’

The phone call with Mexican President Enrique Pena Nieto provided added spectacle and flair to a trade agreement with details yet to emerge.

Both leaders spoke about an agreement Trump called an ‘incredible deal,’ though the president had to sit through some lengthy translations in Spanish.

Near the end of the call, outgoing President Pena Nieto told U.S. negotiators ‘Mexico is very proud of you,’ then offered ‘felicidades’ – congratulations.

HUG IT OUT: President Donald Trump talks on the phone with Mexican President Enrique Pena Nieto, who offered him an ‘affectionate hug’ as they discussed a new trade deal

He also sent what was called in simultaneous translation an ‘affectionate hug and all of my greetings.’

Trump smiled and said: ‘A hug from you would be very nice.’

The call didn’t start out so smoothly, as Trump tried to get a White House staffer in the room to put the call through while the cameras rolled.

‘I believe the president is on the phone. Enrique? You can hook him up,’ Trump instructed. ‘You tell me when,’ he said.

‘It’s a big thing lot of people waiting,’ he said during a lull.

‘Hello? You want to put that on this phone please, hello?’ he said, as the call finally got rolling after an awkward delay lasting a minute. 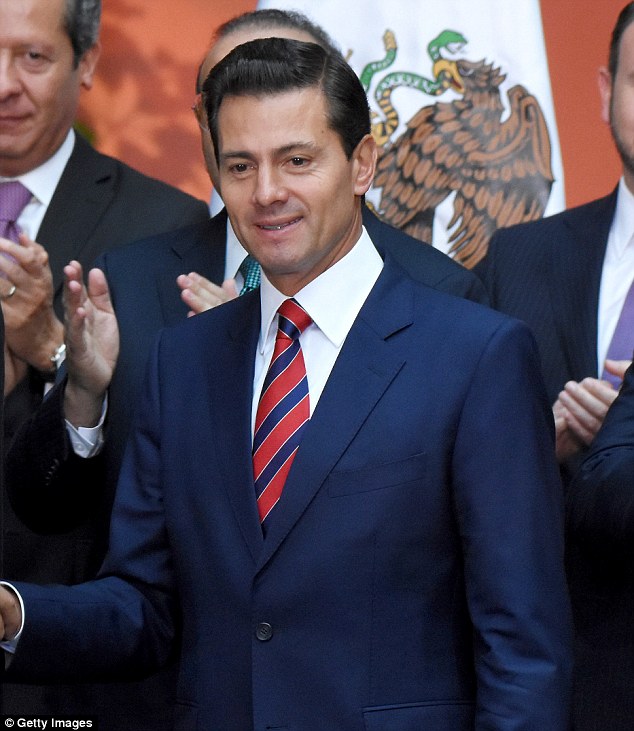 President of Mexico Enrique Pena Nieto spoke in Spanish during the call with Trump, which was carried on speaker phone ‘Hello Enrique?’ It took a while for an aide to get the call set up

Then Trump lauded Pena Nieto, who he met with during a surprise trip to Mexico in the midst of the presidential campaign.

He lauded the latest agreement, and bashed the predecessor deal with Canada and Mexico.

‘I think NAFTA has a lot of bad connotations for the United States,’ announcing the deal with Mexico would have a new name. 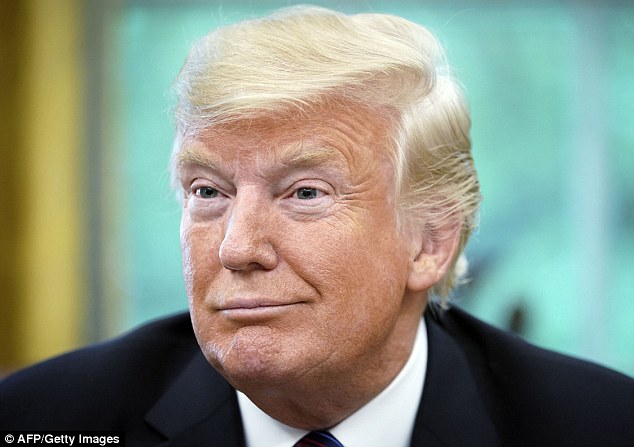 President Donald Trump smiles during a phone conversation with Mexico’s President Enrique Pena Nieto on trade in the Oval Office of the White House in Washington, DC on August 27, 2018 ‘Our farmers are going to be so happy.’ He said Mexico would ‘Immediately start purchasing as much farm product as they can,’ but added no specifics.

He told Pena Nieto: ‘it’s an honor. You’ve been my friend it’s been a long time since I traveled to Mexico and we actually got to know each other quite well.’

The president said he was getting rid of the name NAFTA because it has a ‘bad connotation’ and the United States was hurt for many years by the trilateral deal between the U.S., Canada and Mexico.

Trump, in a horrifying moment, tried to get Mexican President Enrique Pena Nieto on the phone to congratulate him on the deal. But Pena Nieto wasn’t there. ‘Hello?’ the U.S. president said repeatedly on camera, before the outgoing leader, whose term ends at the beginning of December, joined the line.

Speaking in Spanish, Pena Nieto said he wants Canada to join the agreement and congratulated Trump on his political will to push the deal through.

Trump called him a ‘friend’ in response, and said they ‘know each other quite well,’ and that they ‘had a good meeting,’ despite claims that the relationship between the two leaders have been strained.

President Trump said he would give Canada a chance to ‘probably have a separate deal’ although they could also join the deal he just inked with Mexico. 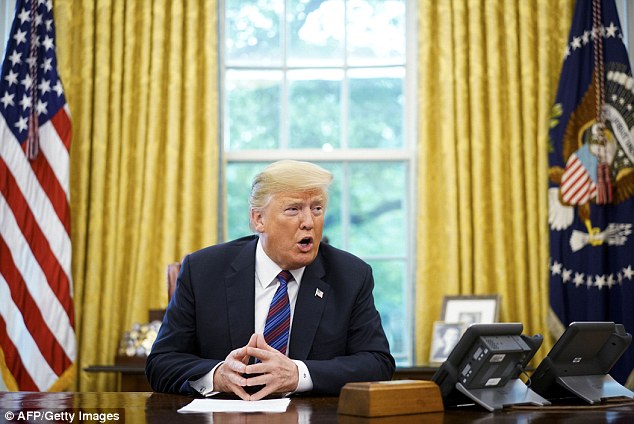 The president said he was getting rid of the name NAFTA because it has a ‘bad connotation’ and the United States was hurt for many years by the trilateral deal between the U.S., Canada and Mexico in his morning announcement

A letter to Congress will be submitted to Congress on Friday. In 90 days, after a mandatory waiting period, Trump said he’d sign the new deal into law.

Trump said that he would be ‘terminating’ the existing, three-party deal once the new one is in place.

He also said he’d be speaking with Canadian Prime Minister Justin Trudeau ‘in a little while’ to discuss next steps.

One way or the other, Trump said the United States would have new rules that apply to Canada, either as a tariff on automotives, or through a negotiated deal. He said if the U.S. can ‘help our neighbors’ that’s a good thing but also stressed his desire to make sure the United States is not taken advantage of.

Trump had hinted at a deal, earlier saying, ‘A big deal looking good with Mexico!’

The White House said shortly after that Trump would be making an 11 am statement. It did not specify that a deal with Mexico had been inked yet said trade would be the topic.

Parties to the North American Free Trade Agreement have been negotiating for months to re-do the Clinton-era trade document pact.

Earlier this year, the president imposed tariffs on steel and aluminum, which angered allies and raised pressure for a new deal, as talks continued with Canada.

The United States and Mexico were said to have reached partial agreement, with President Trump announcing Saturday that a ‘big’ deal could be going down soon.

‘Our relationship with Mexico is getting closer by the hour,’ he said. ‘Some really good people within both the new and old government, and all working closely together….A big Trade Agreement with Mexico could be happening soon!’

Pressure was on negotiators to finish a deal before Mexico’s new president, Andrés Manuel López Obrador, is sworn in December 1. 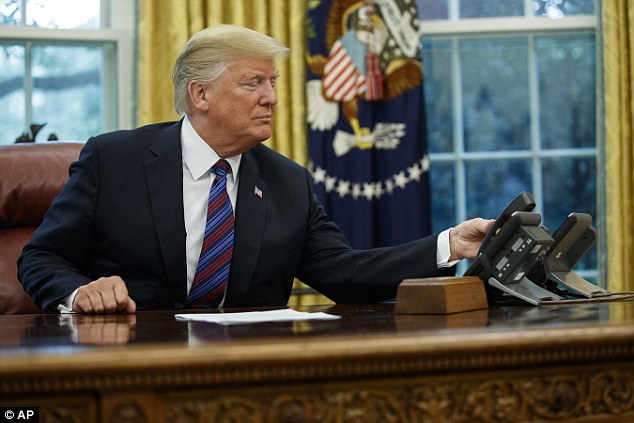 Hello, hello are you there? Trump had difficulty getting Mexican President Enrique Pena Nieto on the line on Monday for their joint announcement

House Majority Leader Kevin McCarthy, who is close to Trump, said Sunday that the expectation is that Canada will be in a hustle to move, too.

‘I believe we’re very close. And also, remember, we make policy in the world of politics. Remember what politics were going on. Mexico was having a presidential election. So it’s very hard for them to make an agreement at the time,’ he told ‘Sunday Morning Futures’ on Fox News.

‘That election is over, but the new president is not sworn in. First thing this administration did was go down there,’ he said. ‘It only makes us stronger, and you’re going into a new election next year in Canada, it’s beneficial to them to have this all agreed upon this year.’

Obrador issued optimistic statements about Trump following his election in Mexico, indicating the potential for a thaw between the two nations, after angry clashes over immigration issues.

Trump has also spoken on the phone about a deal to current Mexican President Enrique Pena Nieto.

Trump campaigned on ripping-up NAFTA, even as talks progressed, his administration clashed with both of its North American Neighbors.

Negotiators appeared to lock down two provisions in recent days.

Mexican Economy Minister Ildefonso Guajardo said Monday that a ‘very important’ issue had yet to be decided when asked by reporters if Mexico and the United States had reached agreement. He said an announcement, however, ‘probably on the agenda,’ further suggesting that a deal was imminent.