Pizza is already known as one of the most indulgent foods out there, but now a pair of YouTubers have found a way to take the greasy treat one step further.

JP Lambiase, 35, and Julia Yarinsky, 28, the duo behind the YouTube channel HellthyJunkFood, are known for creating ‘healthier’ versions of junk food favorites.

But with their most recent adventure in the kitchen, the pair didn’t so much scale down the grease of the average pizza slice as make it several times more calorific by throwing each slice into a deep fryer.

Getting started: A new video on the YouTube channel HellthyJunkFood sees a pizza deep fried 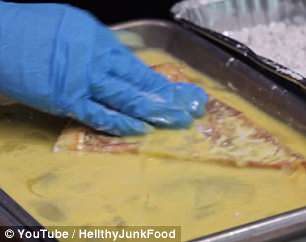 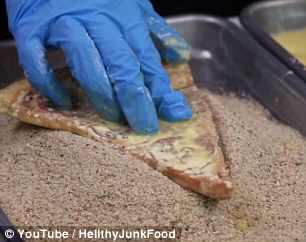 Step-by-step: Each slice is dipped in flour, eggs and breadcrumbs before being deep fried 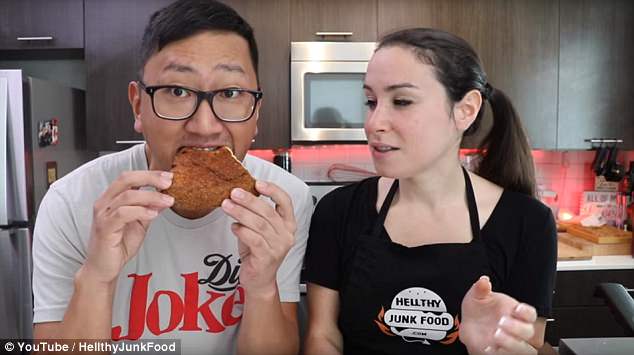 Teaming up: The idea was made real by the couple behind the channel, JP Lambiase and Julia Yarinsky

In the clip uploaded on Sunday, the couple present a pre-baked pizza that they separate into eight slices.

Next, they flop each slice into pizza flour, followed by eggs and breadcrumbs, before throwing it slice by slice into a vat of bubbling oil.

After turning a golden brown color, each slice is carefully removed from the oil, left to dry on a rack and then placed onto a pizza pan.

Once each of the slices has been through the fryer, the newly fried pizza is put together on the pan for a ‘next level’ addition. 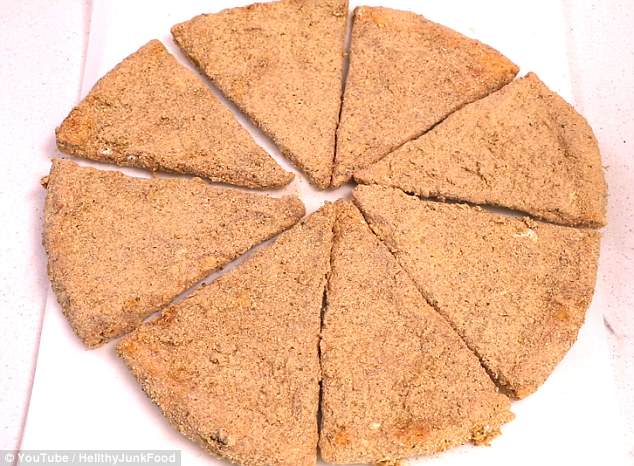 All together: Each of the eight slices was coated separately before moving on to the next step 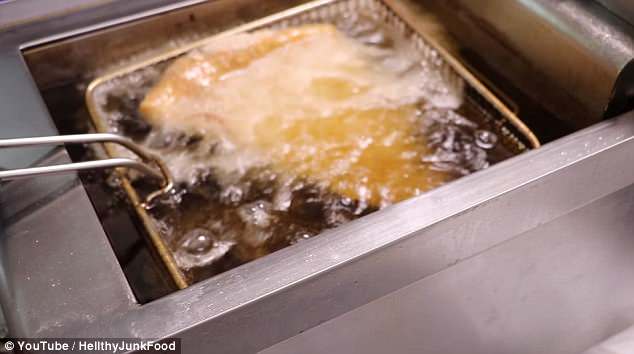 Sizzling: The pieces are deep-fried one by one, dried on a rack and then moved to a pan 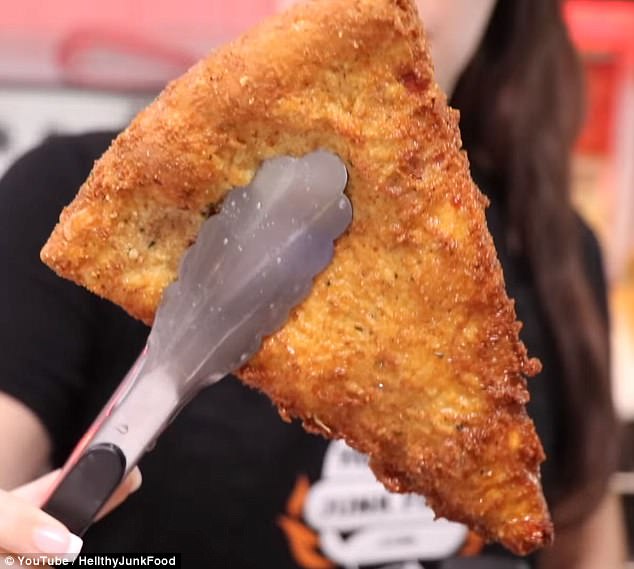 The perfect shade: Julia removes the slices as they reach a perfect golden brown 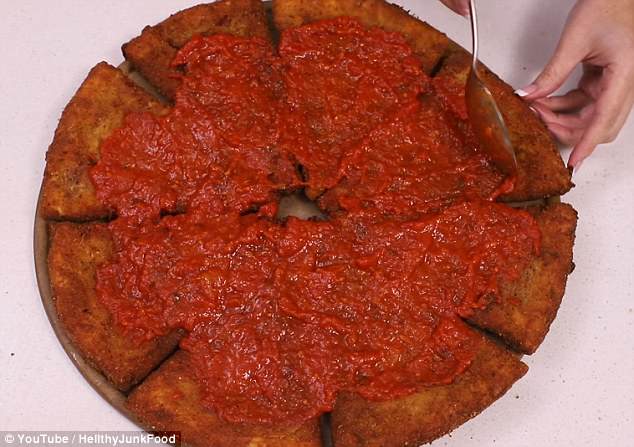 Over again: After frying all the slices, the couple then top it with another set of sauce, cheese and pepperoni

The couple proceed to top the fried pizza with another set of pizza ingredients, including sauce, cheese and pepperoni.

‘This is the best idea we have ever come up with,’ gushes JP as Julia spreads the cheese over the top of the fried slices.

After this step is complete, the pizza is thrown in the oven for 20 minutes to crisp into eight 674-calorie slices.

Once finished, both chefs take a taste of the final product, with JP exclaiming: ‘This must be shared! It’s so awesome.’ 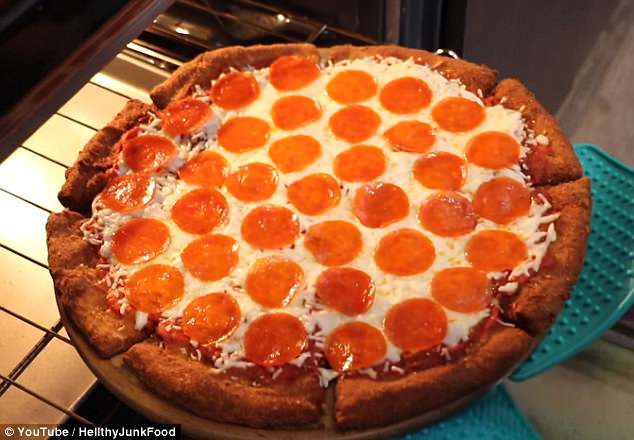 Ready to go: After 20 minutes in the oven, the crispy and cheesy creation is ready to taste 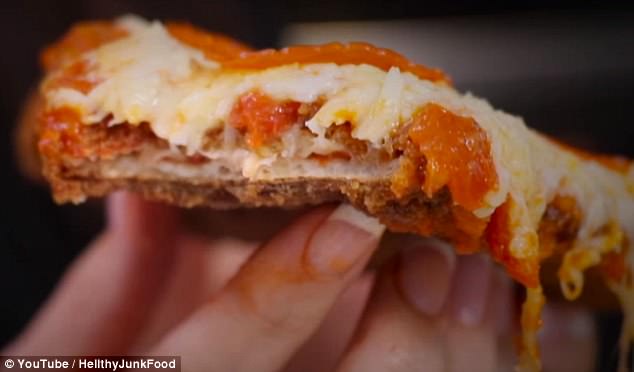 Layers on layers: A cross-sectional view reveals the pizza within the pizza 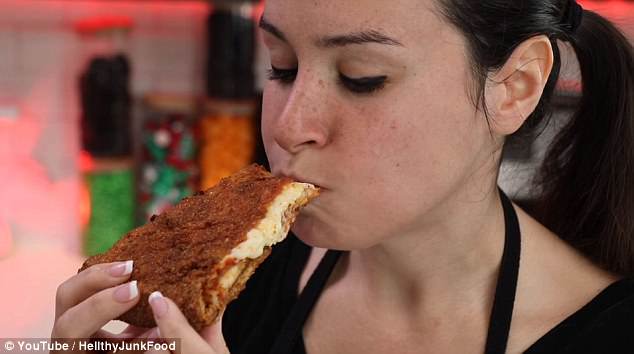 Another go: The couple then take things ‘next level’ by battering a slice of their already fried pizza and throwing it in the oil for another round

After taking a bite, one of the couple’s friends announces: ‘I’m gonna divorce the wife, and I’m gonna marry this.’

The video ends with Julia and JP getting ‘over zealous’ and frying a slice of the already fried pizza.

‘That is next level,’ Julia says after biting into the slice. ‘The double breading actually makes it seem like the breading has become the crust.’

The recipe has proved a big hit among the channel’s followers, with more than 800,000 views and thousands of comments from users claiming that simply watching the video was enough to clog their arteries.

‘I gained 80 pounds from just watching this,’ joked one user, while another added: ‘You took a pizza my heart…literally. I just had a heart attack.’