Texas-based hypercar maker Hennessey has created the most expensive hair dryer on the planet.

It has unveiled its Venom F5 Roadster, a convertible two-seater that will cost £2.5million ($3million) a piece and be capable of speeds in excess of 300mph.

Not only is it set to become the fastest roadster on the planet, it will also be the most powerful, with the twin-turbo 6.6-litre V8 engine packing a jaw-dropping 1,817bhp.

Fastest open-top car on the planet: This is the new Hennessey Venom F5 Roadster, which is claimed to be able to hit speeds in excess of 300mph

The stunning open-top motor has been unveiled during Monterey Car Week in California and is making a bounty of bold claims about its roof-down performance.

It is the convertible version of the £2million Venom F5 Coupe that debuted back in 2020 – a hypercar claiming to be able to reach speeds of 311mph and is British designed despite being produced in very limited numbers in the US.

Just 24 coupes were made and sold out almost instantly after being showcased, and the roadster will be almost as exclusive.

Only 30 are being built to ‘guarantee a unique ownership experience’ and every one will be ‘personalised and individually commissioned to its owner’. 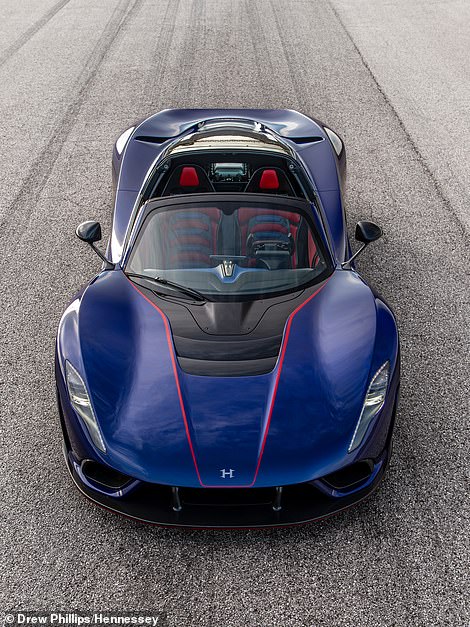 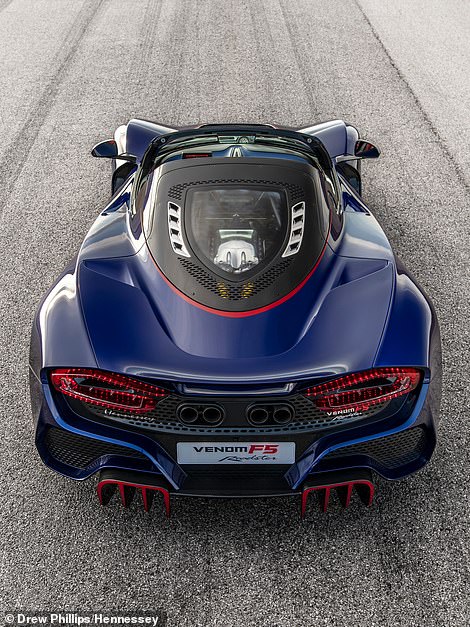 The Texas-based hypercar brand has fitted the open-top hypercar with a 6.6-litre twin-turbo V8 engine that produces a whopping 1,817bhp. It also weighs around the same as a conventional family hatchback 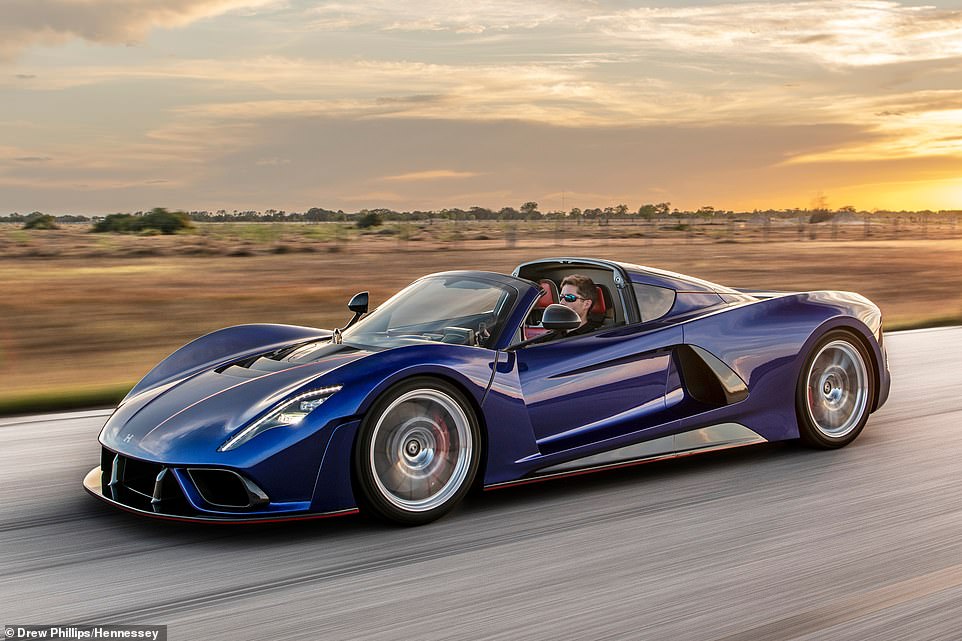 Just 30 examples will be made, with production commencing later this year. Each car will be bespoke to the customer and cost from $3million (£2.5million) 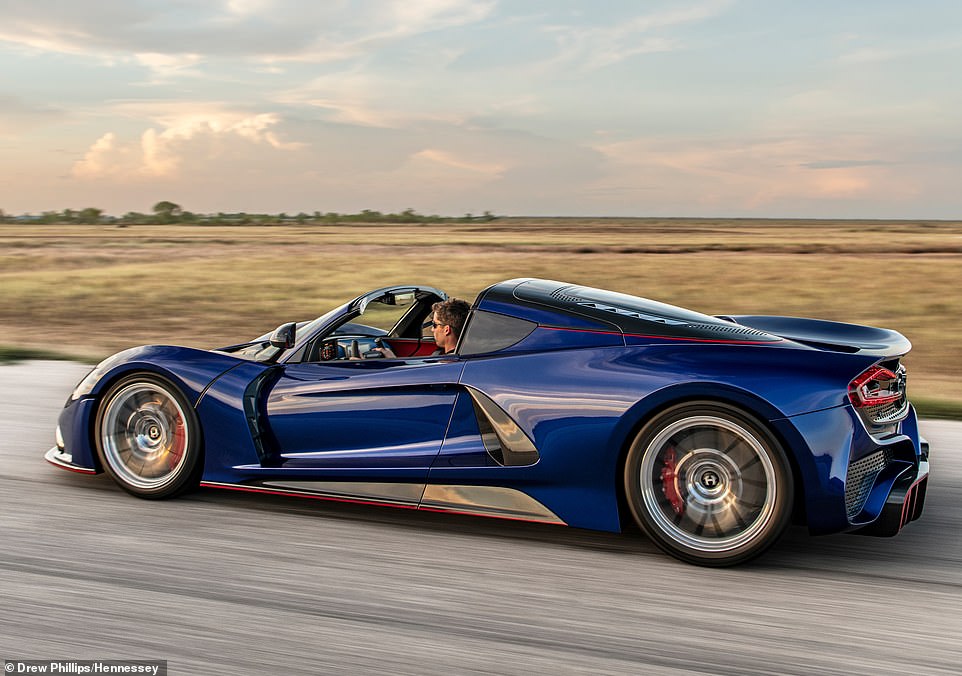 Hennessey Venom F5 Roadster: Will it fit in my garage?

Exclusivity: 30 to be built, all customised

The chassis is a supremely-light carbon-fibre monocoque, with the car tipping the scales at a featherweight 1,406kg. To put that into context, it weighs around the same as a Ford Focus family hatchback.

All 1,817 rampaging horses produced by the ‘Fury’ V8 engine will be delivered to the rear wheels via an automated single-clutch gearbox.

Hennessey says it fully expects the Venom F5 Roadster to surpass the company’s own ‘world’s fastest convertible’ record, which is currently held by its Venom GT Spyder and stands at a staggering 265.6mph.

John Hennessey, the founder and CEO of the bonkers Texas brand, said: ‘We created the Venom F5 to be the ultimate expression of a hypercar.

‘The Roadster version takes the Coupe’s speed, exhilaration, and awe, plus a sprinkling of respect-inducing fear, to a new, truly visceral level that brings owners closer to the Venom F5’s extreme performance.

‘Our 1,817bhp ‘Fury’ engine screams behind the exposed cockpit, with its roar unobstructed by a roof – it is an unmatched automotive experience.’ 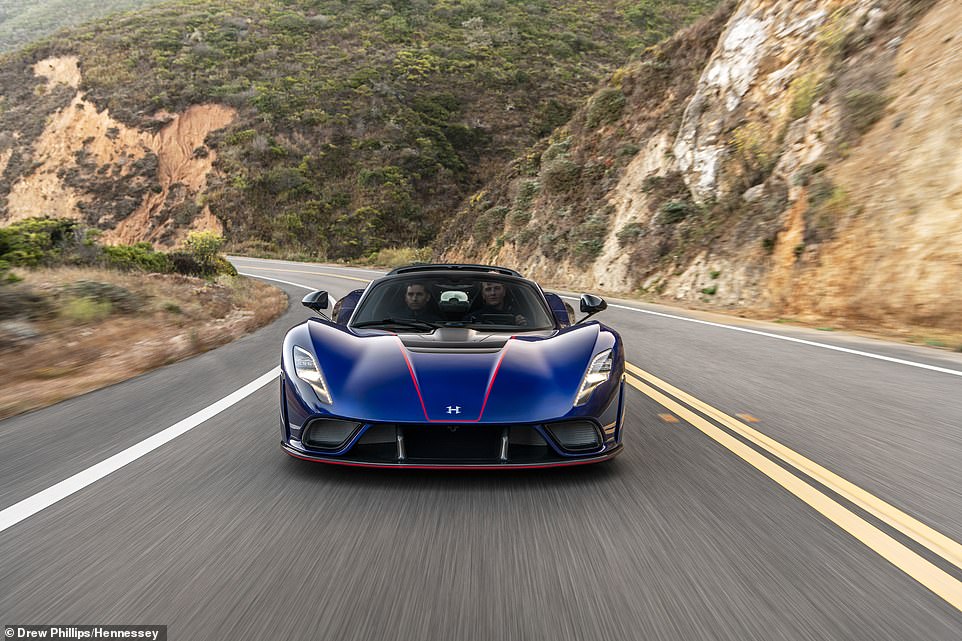 All 1,817 rampaging horses produced by the ‘Fury’ V8 engine will be delivered to the rear wheels via an automated single-clutch gearbox 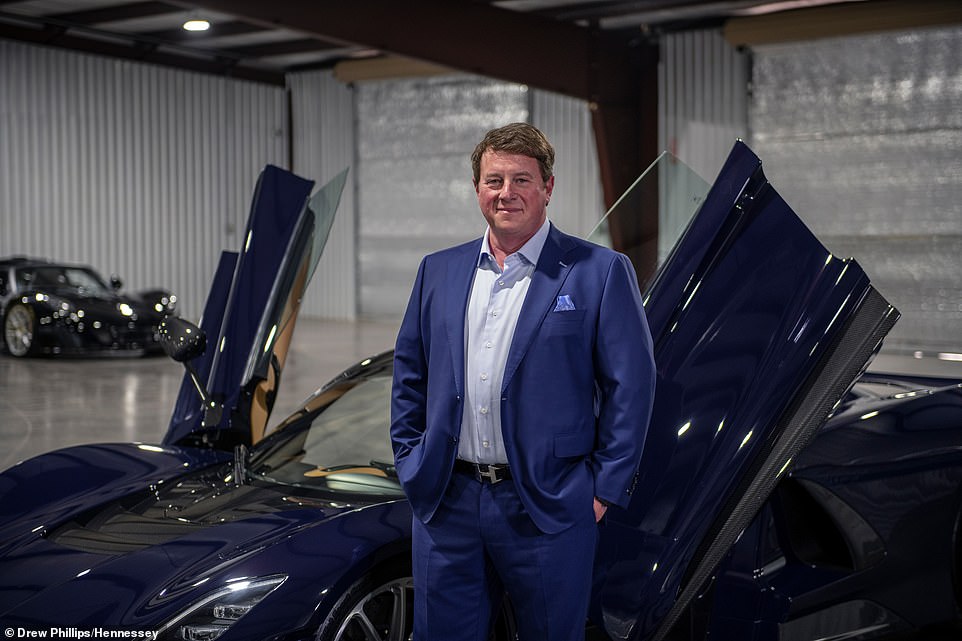 Founder, John Hennessey (pictured) says he fully expects the Venom F5 Roadster to surpass the company’s own ‘world’s fastest convertible’ record, which is currently held by its Venom GT Spyder and stands at a staggering 265.6mph 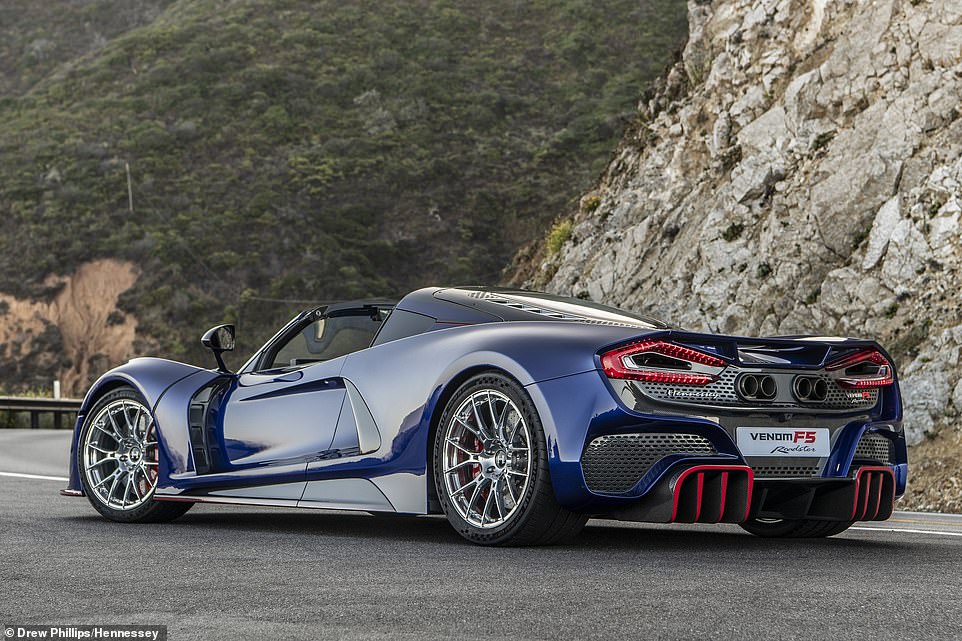 While the top speed is claimed to be over 300mph, that is only when the detachable roof is fixed in place. The top speed with the roof off (as pictured) has yet to be confirmed 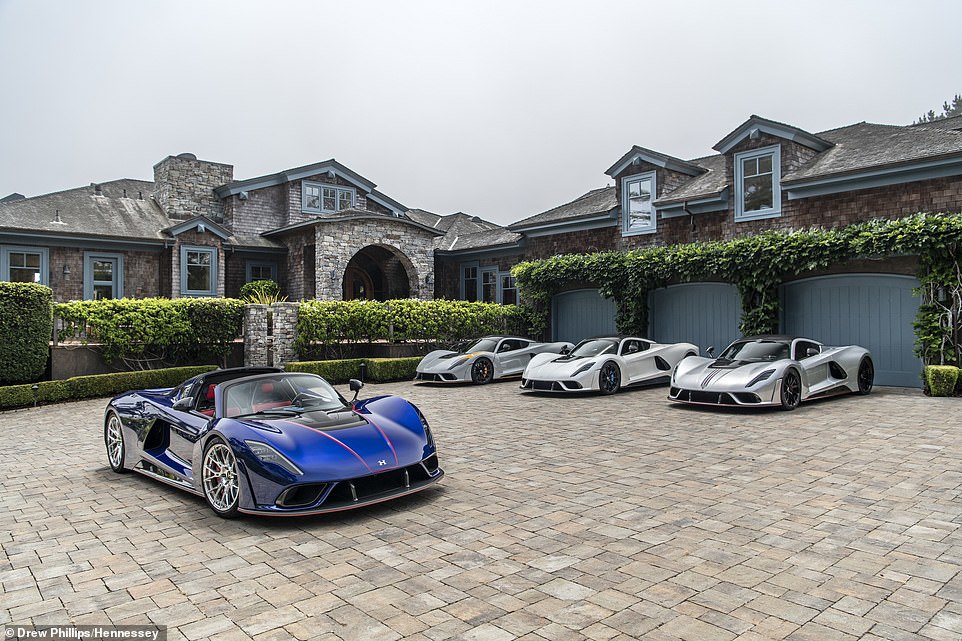 The Venom F5 Roadster won’t be quite as exclusive as the Venom F5 Coupe (pictured in the background). Just 24 examples of the fixed-roof hypercars were built from 2020 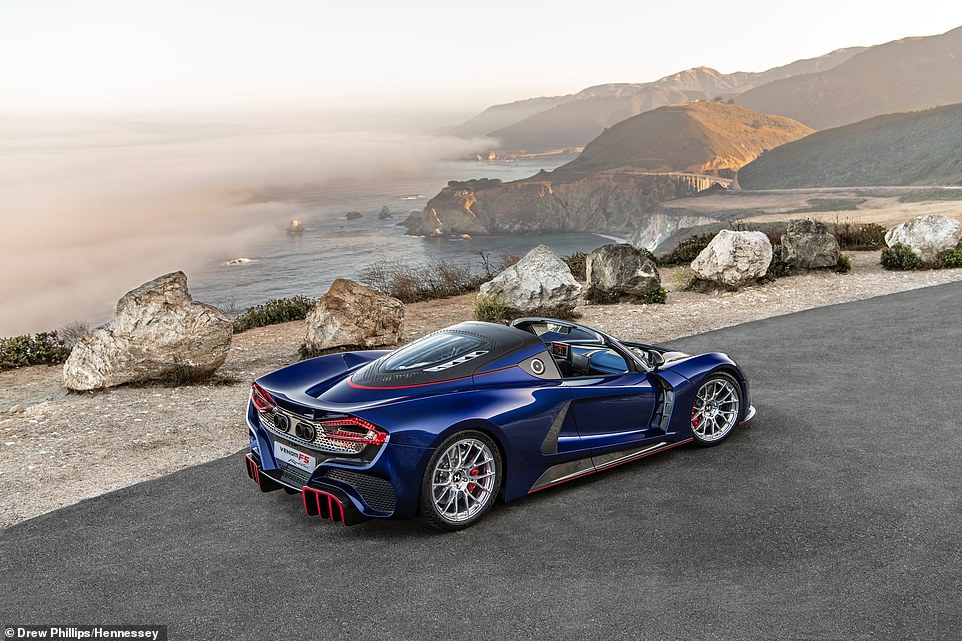 Simply put, the Texas-based hypercar maker has essentially created the most expensive hair dryer on the planet

While the top speed is claimed to be over 300mph, that is only when the detachable roof is fixed in place.

The roof doesn’t fold away into a compartment in the back of the car but is instead a fully-removable panel.

This decision was made to ensure the lightweight characteristics of the vehicle even with the roof on, with the panel made from a rigid carbon-fibre composite and weighing a mere 8kg.

When the roof isn’t in use, owners will have a choice of how to store it: either in a ‘bespoke Merino wool travel bag’ or a ‘carbon fibre sculptural pedestal’. Either way, you can’t carry it with you, so it will have to be left at home. 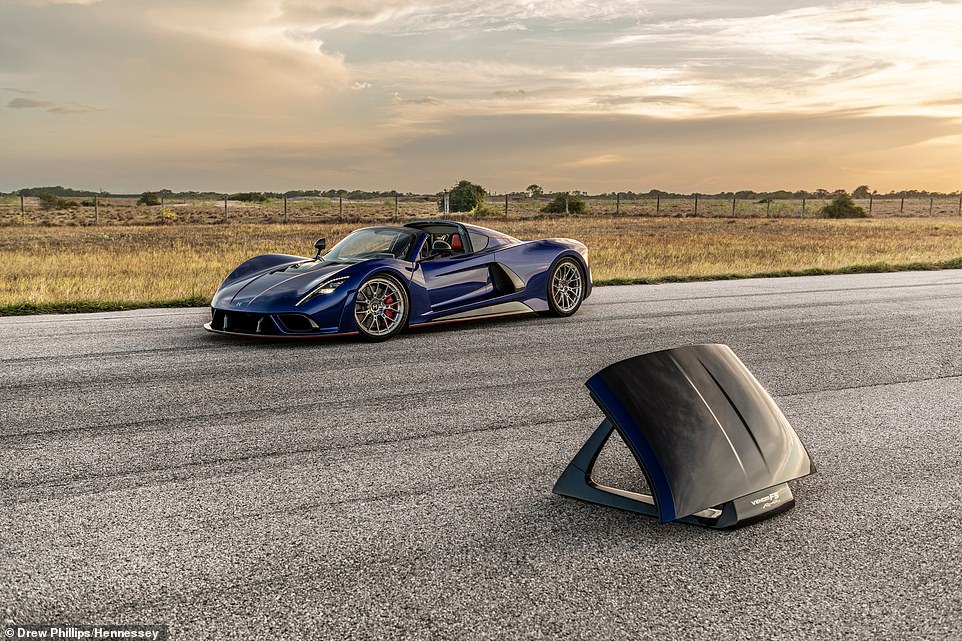 When the roof isn’t in use, owners can pay extra for a ‘carbon fibre sculptural pedestal’ on which to display it. Because you can’t just prop the roof of a £2.5million hypercar against the wall in your garage 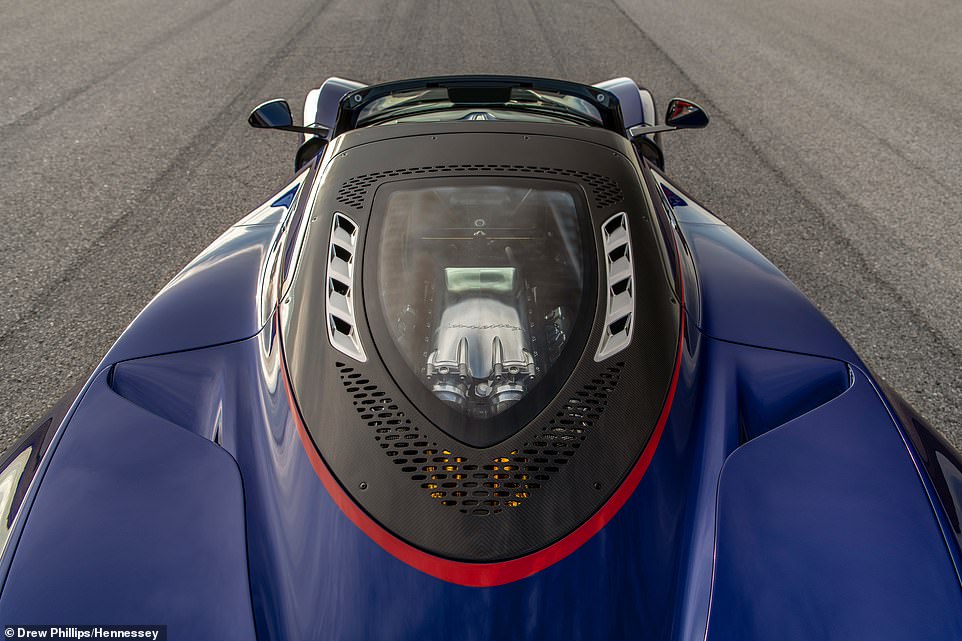 Another unique feature of the Venom F5 Roadster is this engine bay cover, which Hennessey describes as ‘a new tempered glass engine viewing window’ 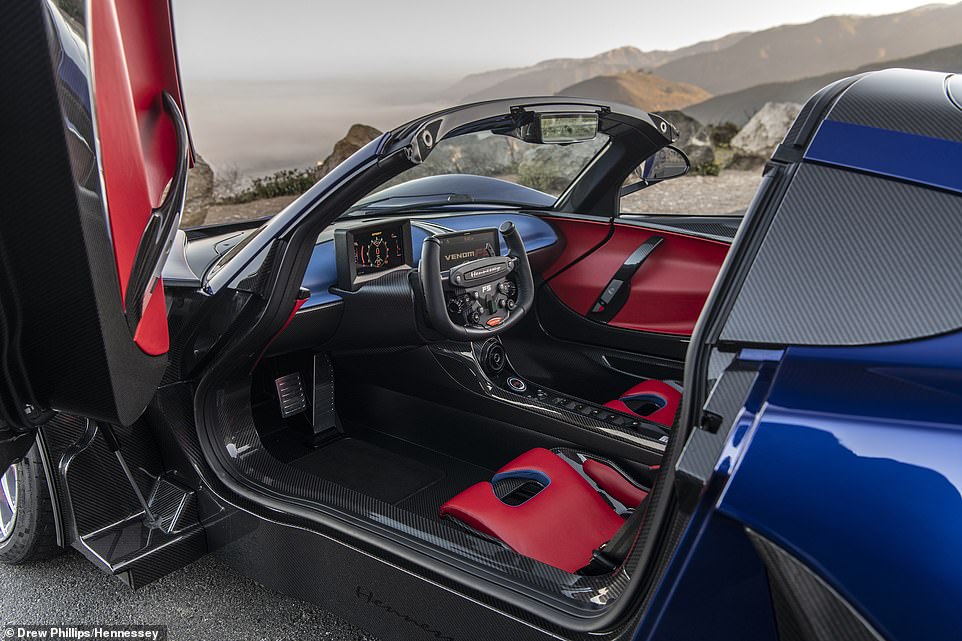 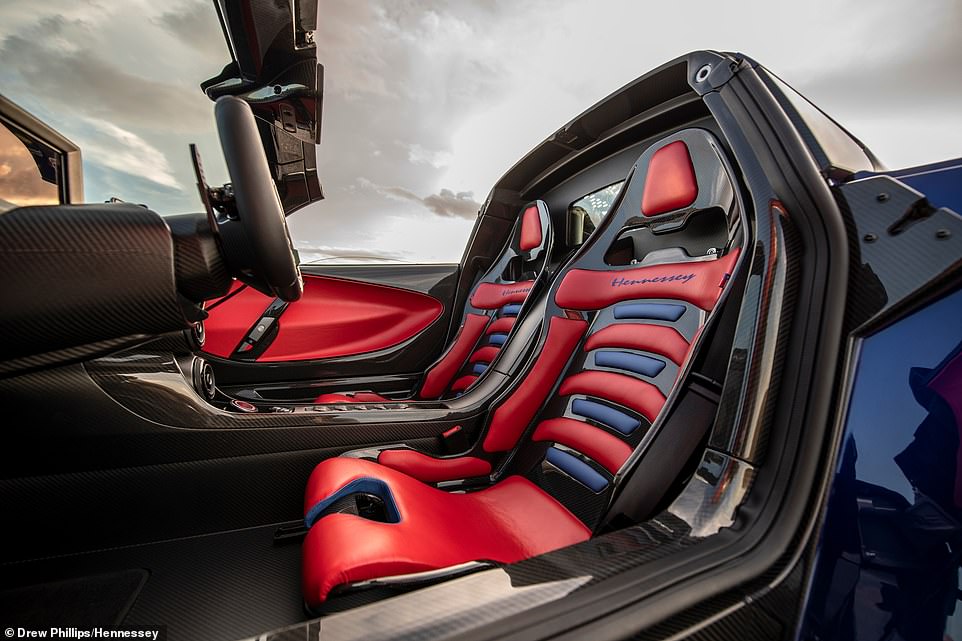 Another unique feature is the engine bay cover, which Hennessey describes as ‘a new tempered glass engine viewing window’.

This panel, in the middle of the rear engine cover, spotlights the massive eight-cylinder powerplant – which was developed and certified for use in jet aircrafts rather than cars – in all its glory.

The Roadster also gets different wheels to its coupe sibling and discerning buyers can specify any exterior and interior colour combination they want – or alternatively leave areas of the Venom F5’s carbon fibre chassis and body panels exposed.

The cabin is fairly minimalist, with two large screens – one the instrument cluster and the other the infotainment display – and an F1-style sawn-off steering wheel.

The car will be produced at the company’s Texas facility and begin in late 2022.