Sacked Ukip leader Henry Bolton was spotted out on the town with his ex-girlfriend Jo Marney today less than 24 hours after he was ousted over the relationship.

Witnesses told MailOnline the couple appeared to be very much still together – despite Mr Bolton insisting repeatedly he had broken off the relationship.

Mr Bolton, 54, and Ms Marney were spotted drinking red wine together at the Rose and Crown pub near Hyde Park this afternoon.

The couple spent more than an hour together at the central London bar, making little secret of their continuing affections. 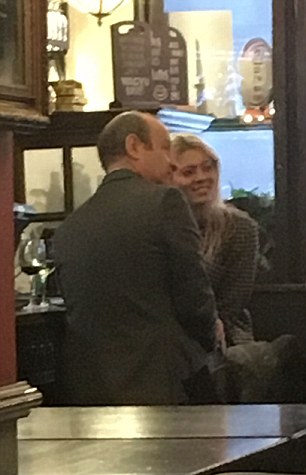 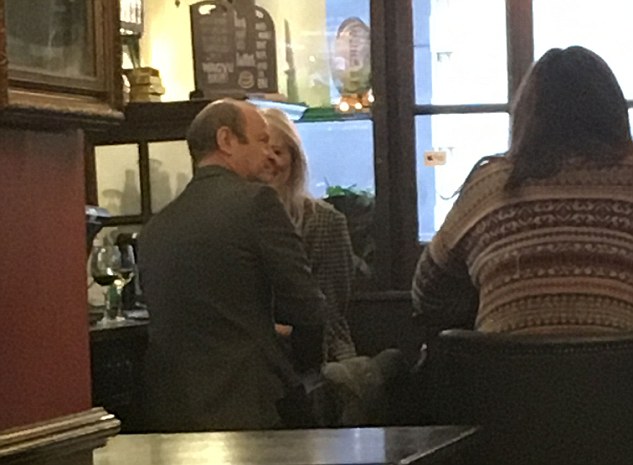 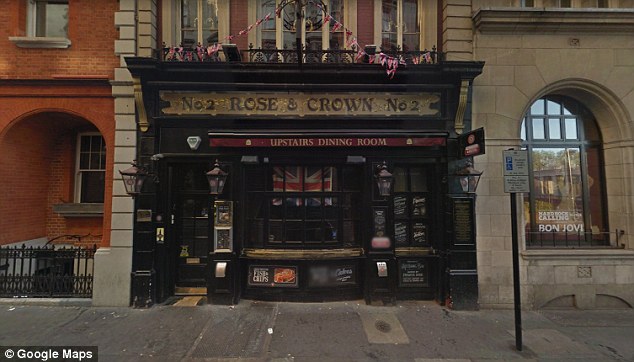 Mr Bolton, 54, and Ms Marney were spotted drinking red wine together at the Rose and Crown pub (pictured) near Hyde Park this afternoon

Mr Bolton was sacked as Ukip leader yesterday by party members disgusted that he had left his wife and children for the 25-year-old glamour model.

The couple had repeatedly insisted the relationship was over after it emerged Ms Marney had sent a tirade of racist messages to a friend.

But they have been seen repeatedly together in recent weeks – with Mr Bolton even claiming the relationship had been under more scrutiny than any since Diana and Dodi al Fayed.

Two friends who bumped into Mr Bolton and Ms Marney this afternoon told MailOnline what they saw.

The first woman said: ‘I went across the bar to go and buy a drink and I saw Jo Marney and Henry Bolton. They were stood at the bar, facing the rugby screen, watching that

‘They seemed really relaxed, smiling, kissing a little bit but not too much PDA. They were there for an hour, maybe an hour and a half, and then they left.

‘It seemed as though they were very much together. They were turned in toward each, they were watching the screen together but they were mirroring each other’s body language.’ 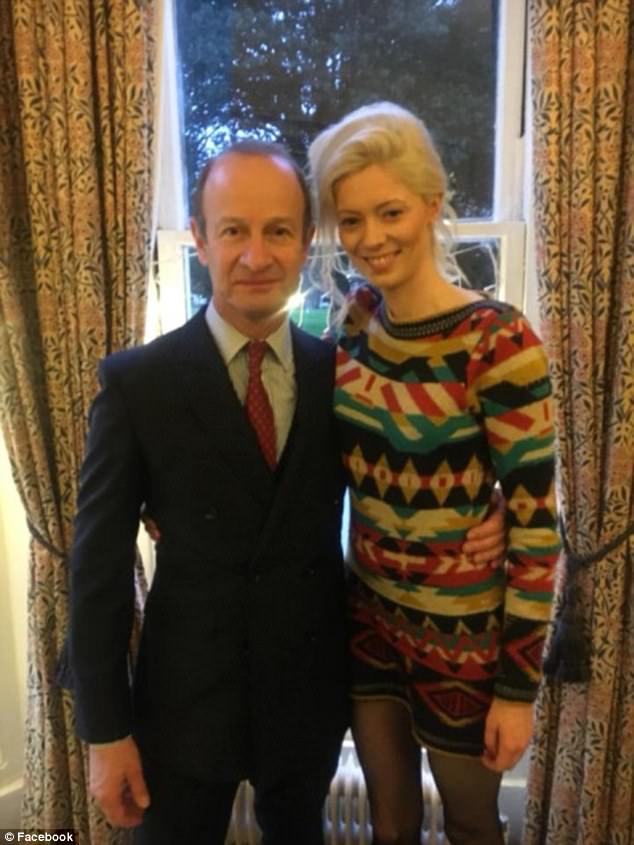 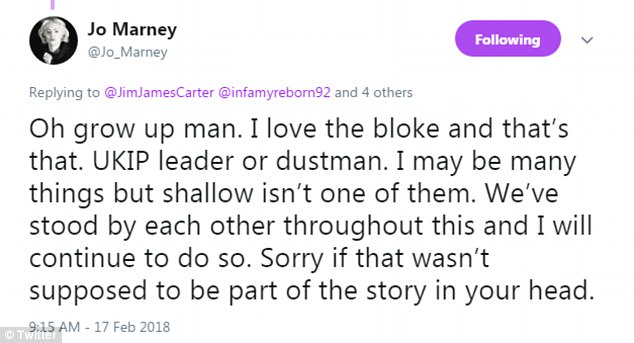 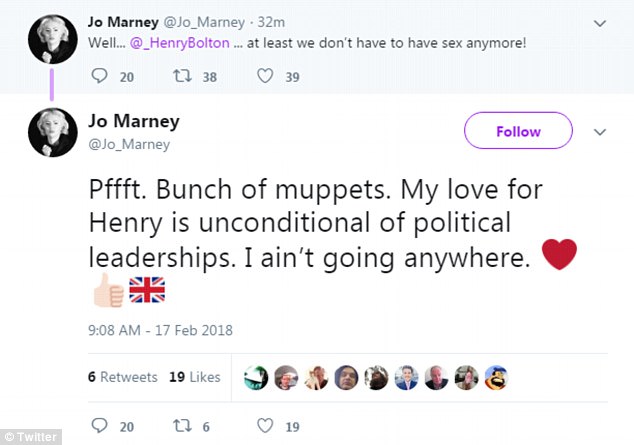 Her friend did not know who Ms Marney was they first spotted the couple – but recognised her after seeing MailOnline coverage of the affair.

How long did Henry Bolton last as leader and what happened to spark his removal?

Henry Bolton is elected leader of Ukip in a shock election result.

Few people had heard of him outside the party, but Nigel Farage had given the former Army officer his considerable backing.

He leaves his wife Tatiana Smurova and their two young children to start a relationship with former glamour model Jo Marney.

The affair sees him hit the headlines and plunge the crisis-prone party into fresh turmoil.

In them she said the US actress would ‘taint’ the Royal Family by joining it.

The Ukip NEC call a meeting at which Mr Bolton’s leadership is put to a confidence vote.

Every member of the NEC apart from Mr Bolton votes against him – but he vows to carry on as leader.

Ukip members vote to oust Mr Bolton as leader at an extraordinary general meeting in Birmingham.

But Mr Bolton comes out fighting – threatening to launch legal action against the party for how he has been treated.

She said the pair were ‘not hiding’ and were both drinking red wine – though there no sign of a bottle.

She said: ‘I suppose I thought they were just a normal couple, the way they were behaving.

‘They weren’t hiding. They looked pretty happy to be honest I was facing them as we were eating. They kept moving in for kisses.

‘She popped out for a cigarette for a few times and that’s when I snuck up to the bar for a look at his face.

‘They looked pretty happy and relaxed to be honest.’

The woman spotted Ms Marney first and recognised her from the deluge of news stories about the text messages she had sent.

She said she had been ‘disgusted’ by the messages sent about Grenfell Tower and Meghan Markel, Prince Harry’s fiancee.

She added: ‘So I recognised her face because she was the one facing us when I approached the bar.

‘That’s when I saw thought ”is that Henry?”. That’s how I noticed them.’

The woman said she appreciated the difficulty the couple were in.

The Rose and Crown is a relatively obscure venue for central London, up a side street a few hundred metres from the bustling Hyde Park.

She said: ‘I feel they were trying to go under the radar as much as they could. It seems as though its pressure from the party more than anything, and she’s embarrassed at the messages.

‘I believe they very much are still a couple or want to be anyway.’

Mr Bolton last night threatened to sue Ukip after being ousted as leader – as Ms Marney hinted they are back together. 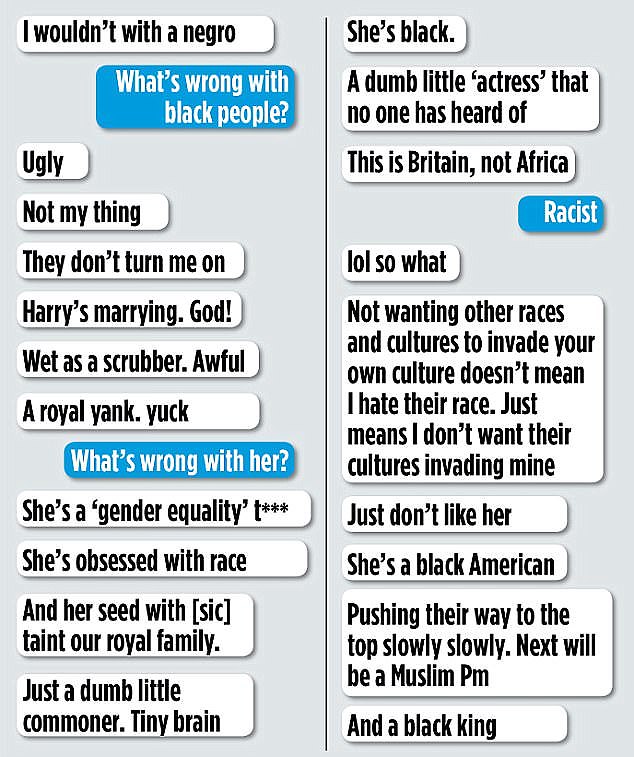 The former Army officer was toppled from the top job when party members decided to support a no confidence vote against him at a crunch meeting yesterday.

Speaking after the vote, Mr Bolton revealed he is considering launching legal action against against Ukip’s NEC over the way he has been treated.

Meanwhile, Ms Marney sent a series of tweets declaring her love for the father-of-three and hinting that they will pick their relationship back up.

She wrote on Twitter: ‘I love the bloke and that’s that. UKIP leader or dustman.

‘I may be many things but shallow isn’t one of them. We’ve stood by each other throughout this and I will continue to do so.’ 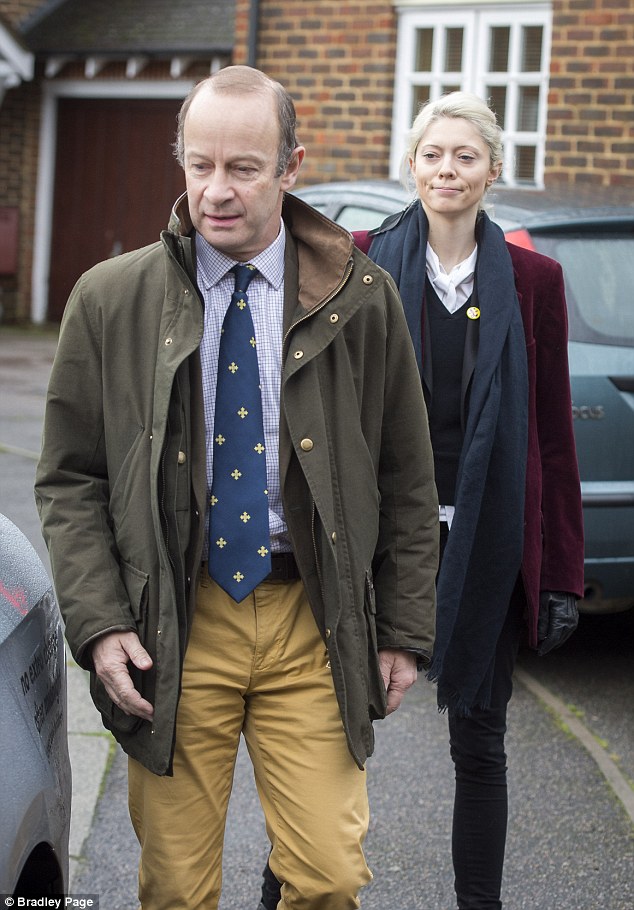 The former Army officer was toppled from the top job when party members decided to support a no confidence vote against him at a crunch meeting yesterday. 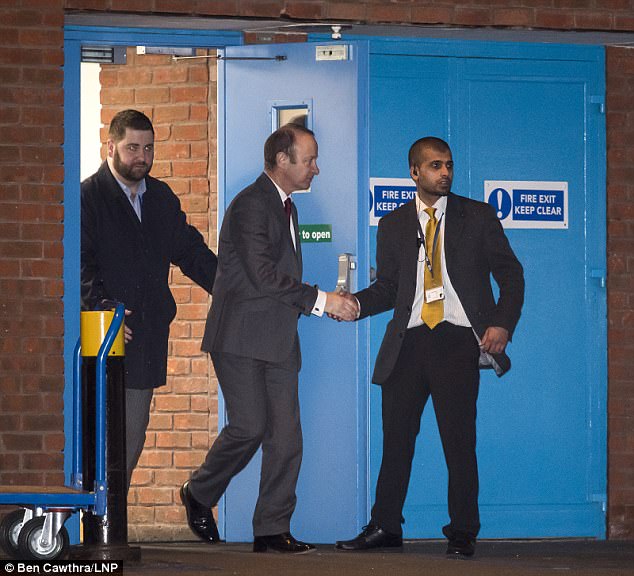