Ousted Ukip leader and his disgraced model girlfriend put on a display of unity as they left a top London hotel hand in hand this evening.

Henry Bolton told the nation he had split up with model Jo Marney after it emerged she said Meghan Markle’s African heritage would ‘taint’ the royal family last month.

But today the politician admitted he lied about distancing himself from her in a bid to keep his job and revealed he and his 25-year-old girlfriend had never left one another’s side.

The left his wife and children days before Christmas to embark on a relationship with the aspiring model.

The pair showed a display of unity as they were photographed leaving the Radisson Blu Edwardian Hampshire Hotel in Leicester Square earlier tonight.

Despite the overcast weather, Miss Marney wore a pair of Ray Ban sunglasses and a skull-print scarf draped around her neck, as she carried a briefcase and handbag.

Dressed in Chelsea boots, tapered stone trousers and a dark double-breasted coat, she cut a smart figure alongside her partner, who wore a three-piece suit.

Towing a printed suitcase with additional bags, it appeared Mr Bolton and his beloved were heading home after a break in the capital.

In recent days the busy duo have appeared on This Morning and LBC to discuss their burgeoning relationship – and the controversial messages sent by Miss Marney. 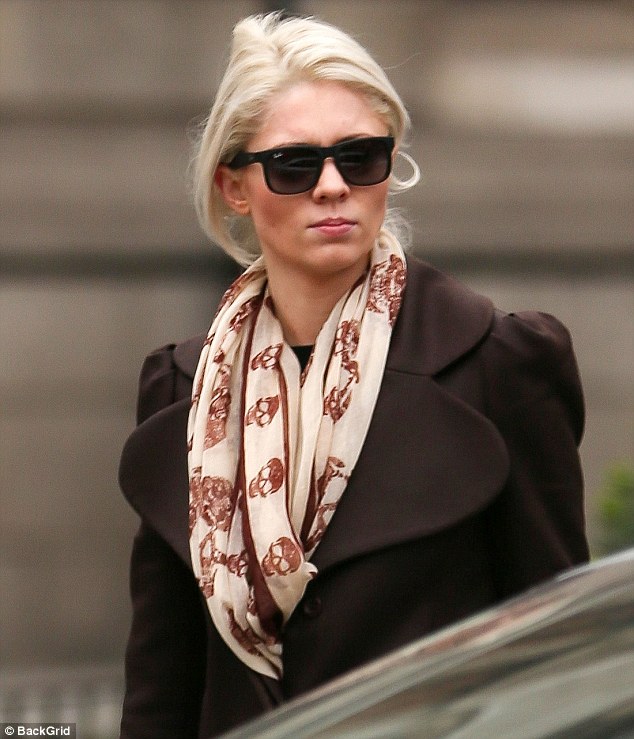 United front: Despite the overcast weather, Miss Marney wore a pair of Ray Ban sunglasses and a skull-print scarf draped around her neck, as she carried a briefcase and handbag

Asked by host Nick Ferrari if they were ‘ever not together’, Mr Bolton said ‘No’ – and on whether he had previously told ‘fibs’, he admitted that he was ‘playing on words’.

Miss Marney was asked if their romance was switched off and on, replying: ‘It wasn’t. It was to the general public, but it wasn’t to me. I was fine with it. I was a Ukip fan.’

She added: ‘There was a bit of friction about it, but I understood. It’s quite difficult to sit at home and watch your boyfriend on telly saying that he’s not your boyfriend.’

Asked if she could trust Mr Bolton, Miss Marney replied: ‘Yeah, of course I can.’ She then appeared to joke: ‘Maybe the public shouldn’t trust him but I certainly did.’ 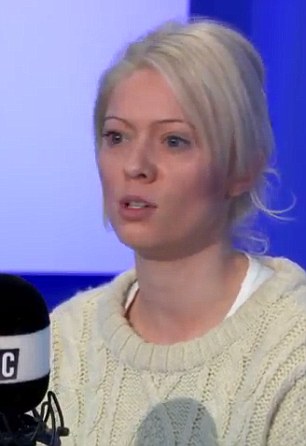 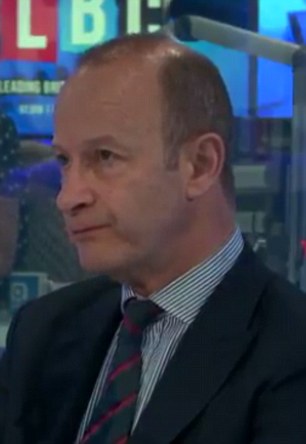 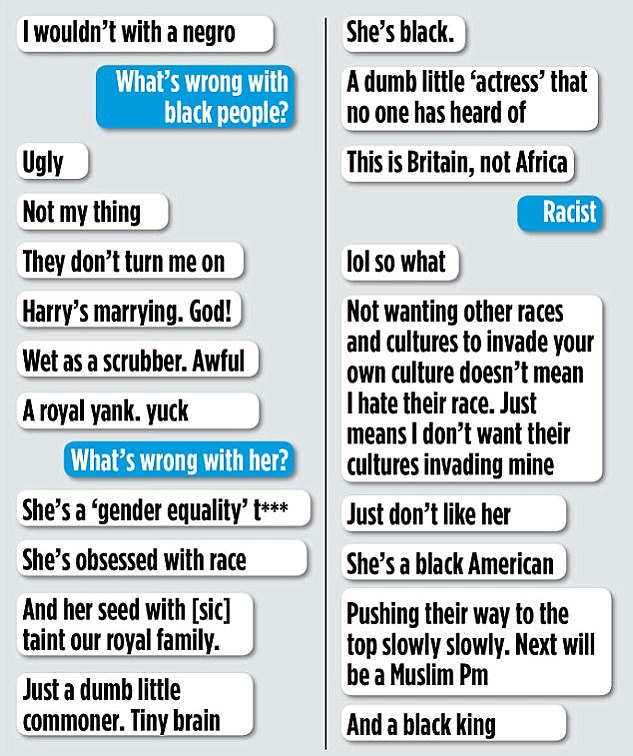 The row over the texts broke out when it emerged Miss Marney, 25, had said that Meghan Markle’s mixed-race background would ‘taint’ the royal family 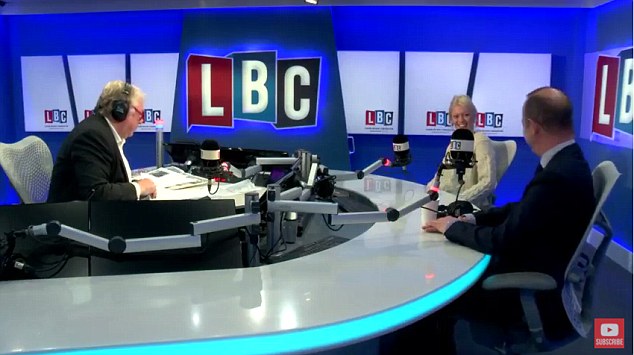 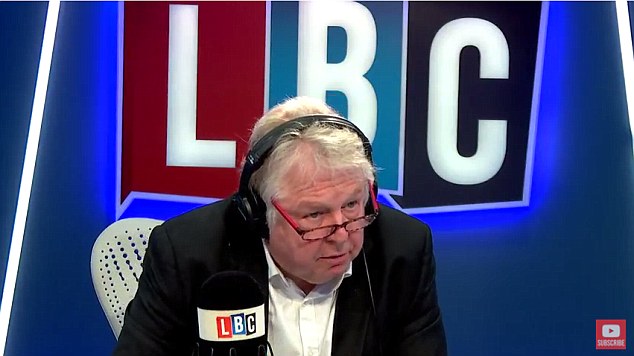 Nick Ferrari (pictured) asked Miss Marney if the couple’s romance was switched off and on, and she replied: ‘It wasn’t. It was to the general public, but it wasn’t to me. I was fine with it.’

She added that she was attracted to his ‘many’ qualities, adding: ‘He’s cheeky, he’s funny, he makes me laugh, I think he’s a gentleman. I think he’s bloody great.’

She was also asked how Ukip had treated her, replying: ‘I think I’ve been used as a political pawn. I think there’s certain people within Ukip who have their own political agendas at heart, rather than the party, to advance their own careers, and I think they’ve tried to destroy my character in order to get to Henry, in order to oust Henry.

‘I’m not going to names, but a small group within Ukip. I think it’s because they wanted to advance their own political careers. I think they were anti-Henry from the start.’

Miss Marney then spoke about how it was instant attraction when she first met Mr Bolton in Kent, saying: ‘We met at a Ukip lunch in Folkestone just before Christmas.’ 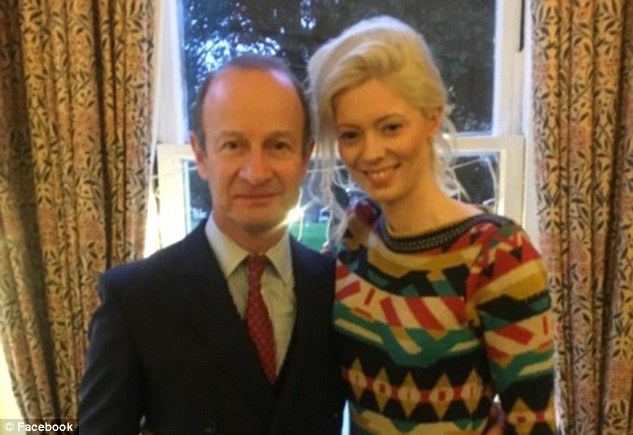 Asked if she could trust Mr Bolton, Miss Marney appeared to joke as she replied: ‘Yeah, of course I can. Maybe the public shouldn’t trust him but I certainly did’

Mr Bolton added: ‘Jo’s an attractive lady. We were talking for about five minutes, and I thought, well, there’s a sagacity here… some of the comments she made about political things.

‘We talked about the organisation of the party, we talked about some of the things going on in Kent. It was a very brief conversation.’

Asked what the state was of his marriage to his wife Tatiana at this stage, Mr Bolton said: ‘It was as it had been for some months. My wife and two children had moved to Vienna in July, by mutual agreement.

‘There was no animosity over that, it was a practical move because I was going for the leadership and it was a way of ensuring there was some income coming to the family through my wife, because there was no other income. 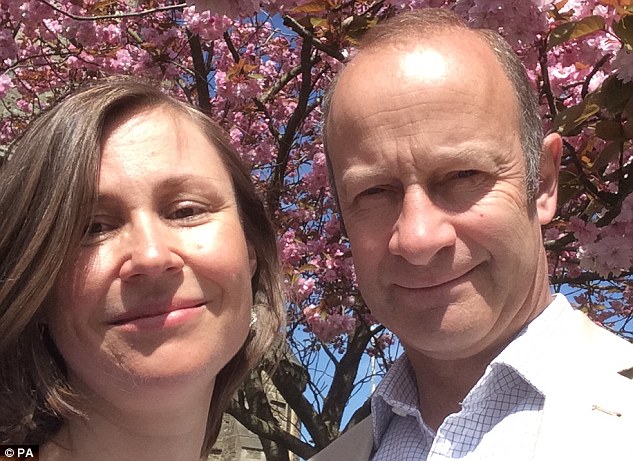 ‘And at least that way we secured the future for the two girls no matter what the outcome of the leadership contest.’

He insisted the ‘romantic side’ of his marriage was over when he met Miss Marney, but said his wife has been left ‘deeply hurt and upset about this – so has her family’.

The row over the texts broke out when it emerged Miss Marney had said that Meghan Markle’s mixed-race background would ‘taint’ the royal family.

Yesterday on ITV’s This Morning she said the comments were ‘disgusting’, adding: ‘The things that I said were meant to shock and they don’t reflect my real views.’

Mr Bolton made regular media appearances after the row broke out in January following the revelations in The Mail On Sunday, and had said at the time that the ‘romantic side’ of his relationship with Miss Marney was ‘over’.