Convention dictates that horror films begin on a cheery note. Winsome young lovers frolicking in the moonlit surf, perhaps, or a group of friends heading off on a trip into the unknown.

Jeremy Corbyn’s horror film of an interview with the BBC’s Andrew Neil did not begin so gently. Bang. Straight away, questions rained in about the Chief Rabbi’s excoriation of Labour’s anti-Semitism.

The half-hour head-to-head was a disaster from start to finish for Corbyn.

This response was nothing short of disgraceful.

Jeremy Corbyn’s horror film of an interview with the BBC’s Andrew Neil did not begin gently. Bang. Straight away, questions rained in about the Chief Rabbi’s excoriation of Labour’s anti-Semitism, writes HENRY DEEDES

‘Car crash’ has become the lazy phrase used to describe such career-threatening interrogations. This face-off went way beyond that. It made the Hindenburg explosion look like a minor prang.

Seemingly oblivious to the furore, Jezza boldly plonked himself on the front foot, expressing a desire to meet the Rabbi and ask him why he felt so angry. He sounded quite affronted, as though this was all a bolt from the blue. 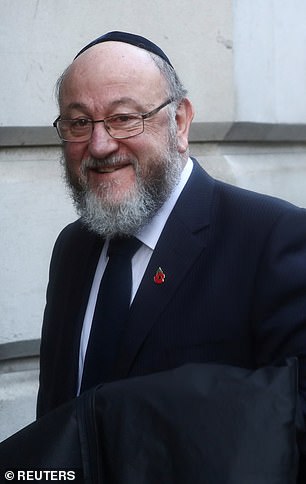 If wiser heads had prevailed after the Chief Rabbi’s (pictured) intervention, Labour would have postponed the launch of its Race and Faith manifesto, writes HENRY DEEDES (file photo)

Neil asked Corbyn whether it was anti-Semitic to say ‘the Rothschilds are Zionists who run Israel and run world governments’. Corbyn admitted it ‘can be’. Can?! TV viewers must have been spluttering on their pre-prandial gins.

Contrary to Corbyn’s claims to have cracked down on anti-Semitism, Neil said one Labour member had merely been given a written warning for denying the Holocaust. A measly letter! ‘That was some time ago, I believe,’ Corbyn lamely proffered, not seeming very sure. Well, it was 2017, Neil replied.

Corbyn argued that he’d toughened things up since then and he’d issued education packs to help colleagues deal with racism. When had he done this? ‘Over the summer.’

He looked like a man increasingly out of control of his own party. His front foot was, by now, parked firmly at the back of the batting crease.

Sitting half-slumped, his right eye was beginning to twirl like a discarded pea disappearing down a kitchen sink plughole. Time and again, a flailing Corbyn wailed that Neil wouldn’t let him answer. The truth was, he had none to give.

But then what a ramshackle day it had already been.

If wiser heads had prevailed after the Chief Rabbi’s intervention, Labour would have postponed the launch of its Race and Faith manifesto. 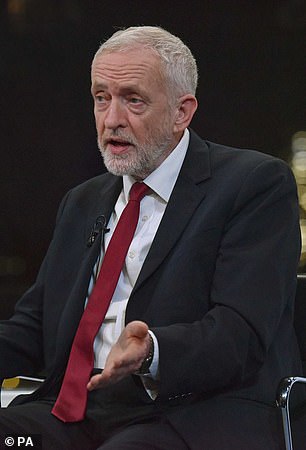 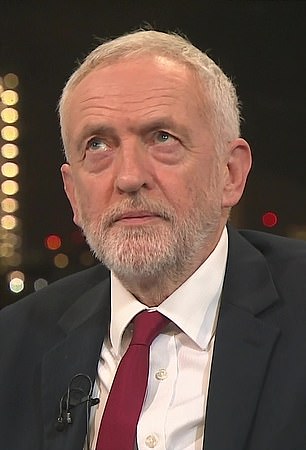 The half-hour head-to-head was a disaster from start to finish for Corbyn. Four times. Four times during this gullet-choking ordeal, he refused Neil’s offer to apologise to Britain’s Jewish community, writes HENRY DEEDES

But, undaunted, it went ahead. Guests had to run a gauntlet of protesters with ‘Not Fit to be PM’ placards. Several vans had also parked up carrying anti-Corbyn billboards. Sample slogan: ‘A Vote for Labour is a Vote for Racism.’

It didn’t help that Corbyn himself was late. Uh oh. Nearly an hour ticked by and still no sign of him. The BBC’s Norman Smith suggested to viewers that traffic might be to blame, adding drily: ‘Or it could be that Mr Corbyn is still working out what to say.’

The audience were kept entertained by a gospel band, who sung a lively version of the Tracy Chapman foot-tapper Talkin’ ’bout a Revolution. In front, Diane Abbott wore a passive aggressive scowl the late actress Dame Thora Hird would not have disowned.

The organisers eventually decided to crack on regardless of the missing Corbyn, with speeches from David Lammy (fighting to be re-elected MP for Tottenham) and Tan Dhesi (standing in Slough). All the while, the chair beside gloomy Diane remained painfully empty.

Cowardly, he didn’t address the Chief Rabbi’s remarks directly, preferring to plough on with a pre-prepared speech.

He claimed to be very proud of this Race and Faith manifesto, holding it aloft like a child who’d won a goldfish in a bag at a fairground.

Corbyn pointed out that the Tories hadn’t mentioned racism in their manifesto. True – but they’re not being investigated by the human rights watchdog.

His voice coarse and peppery, the embattled Labour leader kept fidgeting with his glasses. Each sentence was punctuated by a little readjustment of the frames.

Doubtless, anticipation of the evening’s forensic examination by Andrew Neil – poking him in the eye with his stubby Glaswegian finger – was playing on his mind.

After 20 minutes, Corbyn wrapped it up, declaring the Race and Faith manifesto to be ‘a huge step forward’. The Chief Rabbi’s name was not uttered once. There was no apology. No sign of contrition.

As he finished, he turned to give colleague Dawn Butler a ‘How d’ya think I did?’ smile. The last time I saw such a look was on Prince Andrew’s face after his cataclysmic Newsnight interview.

Unfit to be Prime Minister? Jeremy Corbyn is utterly unfit for tea-time television.